Trending
You are at:Home»Cool stuff»Health + Fitness»A curly situation
The 2018 Winter Olympics in PyeongChang, South Korea, is now just two months away and athletes are well and truly in the final prepping stages. So, what does this mean for Australia? We are a country that is built on ‘summer’ sports – think cricket, swimming, cycling and beach volleyball. We don’t really have the climatic conditions to truly dominate in ‘winter’ sports. But, that doesn’t mean we can’t be competitive on a global stage. After all, Australia is a nation of battlers who never shy away from a fight.

So, let’s look at some of the sports that will be played during the Winter Olympics and look at our chances of success.

A few months ago, ManSpace staff writer Adelle King and I had a very intense conversation on one of the more ‘obscure’ winter sports – curling.

Curling has long been a fascination of mine because, well, I’m not too sure how it works. And before Adelle started here, I thought I was the only one.

If you’re reading this and thinking ‘what the hell is curling’, you may know it as the sport where a bunch of people sweep ice in front of a big sliding rock.

For a long time, this is all I knew about the sport and it raised so many questions like, why are they sweeping? What is the purpose of this sport? What the hell is a ‘curl’?

Dean Hewitt is a competitive curler who recently represented Australia at the Pacific-Asia Curling Championships. Unfortunately, the team narrowly missed out on a medal coming in fourth place.

“Curling is often referred to as ‘lawn bowls on ice’,” Dean says.

“Traditionally, teams of four take turns at sliding 20kg granite rocks along a 40m sheet of ice to a target at the opposite end. The objective is to get your team’s rocks closer to the centre of the target than the opposition’s closest rock.”

“You will often notice curlers vigorously sweeping in front of the rock, which assists the rock to travel further and straighter.

“Although this seems straight forward, curling is also described as ‘chess on ice’ due to the complicated strategy in the game.”

Curling is still a relatively small sport in Australia. Dean, who is a member of the Victoria Curling Association, suggests a grand total of around 200-300 regular players across four clubs – Melbourne, Sydney, Brisbane and Perth.

“However, Australia stacks up quite well internationally, considering the size of our membership base,” Dean says.

“In the first week of November, at the Pacific-Asia Curling Championships held in Erina, NSW, the Australian Men’s Team won seven out of eight games in the round robin. In the semi-final, we had a shot to beat China in the extra end to go to the World Championships (similar to a kick after the siren in over time); however, we narrowly missed it and ended up finishing fourth for the tournament.

“Although it’s tough knowing how close we were, it is something we should be proud of considering we beat two professional teams and a number of other teams that have dedicated curling ice in their countries.” 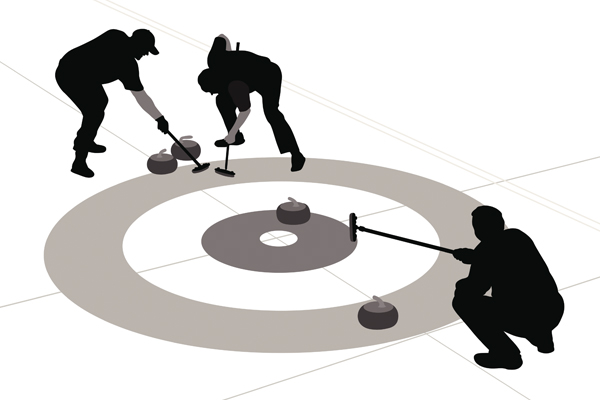 Why exactly is it called curling?

Fourth out of nine teams is the team’s best result for a while in the men’s division. The mixed doubles team came 18th out of 39 teams.

“We will be striving to build on this next year. It’s always tough trying to compete against teams who are professional or have dedicated curling ice in their country. We play on skating ice which is very poor for curling, but we keep persevering and taking it to them.”

So, what exactly makes a good curler?

“Good curlers typically encompass a number of traits. Precision, finesse, power, endurance, a strategic mind, nerves of steel and most of all good sportsmanship all create a great curler,” Dean says.

“Curling may be in my blood, but many curlers have started playing the sport all across Australia without any background in it and have been very successful.

“It’s a great sport for anyone. I began when I was 5-years-old and we’ve also had members well over 80. It’s a very social sport where after a game the winners buy the losers a drink at the bar. And no, you don’t skate in curling, in fact, I’m a terrible ice skater and that’s why I stick to curling.”

Of course, being a winter sport in Australia means it can be quite tough to attract new players and sponsors.

“To increase participation and sponsors we need to perform at a high level (such as the Olympics) to gain more exposure, but to get to that level we need more curlers, sponsors and funding to improve. The obvious discrepancy between us and the top teams are that they play nearly every day of the year on dedicated curling ice whereas we are lucky to play 20 days per year on skating ice.

“Having professional teams in Australia looks like it’s a long way down the track but if we can acquire a dedicated curling facility, that would get us one step closer to competing against these professional teams and maybe make the Olympics.

“And it can be done. Four years ago, Estonia was curling in very poor curling conditions in an abandoned Soviet Missile Factory. Three years ago, Estonia invested in building a dedicated curling facility in Tallinn. Since then, Estonia has boosted its ranking to win gold at the New Zealand Winter Games against top teams that have qualified for the 2018 Winter Olympics.”

Dean and his mother are continuing to train for their second World Mixed Doubles Curling Championships in April to hopefully further increase Australia’s ranking.

If you think curling may be the sport for you or would like to find out more information, you can contact the Victorian Curling Association at: http://www.curlingvictoria.org.au, or if you are in another state, follow the links at: http://www.curling.org.au/associations. The Victorian Curling Association is hosting a Beginners Curling Competition so you can try it and play against other beginners over four weeks. Details at: https://www.eventbrite.com/e/melbourne-beginners-curling-competition-2018-tickets-39686789255.