Trending
You are at:Home»Cool stuff»A Sinn not to try it…

I must admit SinnSound is not a brand that I was familiar with before being offered the opportunity to test out the company’s award-winning Soundbox product – the award in question being the Product Design – Entertainment award at the Melbourne Design Awards in 2020.

The product is plugged as a surround sound amplifier that can turn your standard sound system into something spectacular. For those who don’t have even a standard system SinnSound also sells a package which includes four ELAC bookshelf speakers and the Soundbox itself.

For the purpose of this review, that’s what I was provided with. 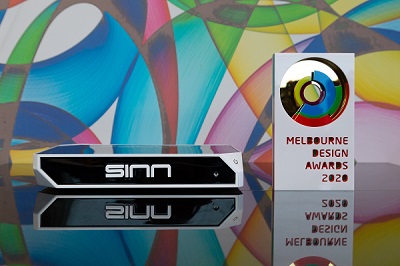 Opening the SinnSound box, you’re warned that a revolution is coming – you check your watch and hope it doesn’t arrive too soon, dinner is in the oven…

You don’t get an instruction manual, but you don’t really need it because the system is a relatively straightforward plug-and-play offering.

The box is a solid, angular device, compact enough to slot into any entertainment unit but subtle enough to sit on a unit top if required.

My initial plan was to connect it to my flatmate’s TV and crank up some loud, boisterous action movie. Alas, that plan didn’t come to fruition. The primary connection point from box to TV is through a headphone jack, something that our antiquated TV did not have.

I did have an RCA cable to hand which I tried in a variety of ways but no dice. The final connection attempt was via Bluetooth which the TV miraculously had but the connection attempt had to come from the external device – my phone connected but the Soundbox, well there was no mechanism by which I could pair the two, so I gave up.

A quick text to my other half sourced a TV and a plan to relocate to his place the following weekend.

I decided instead to set everything up as a sound system. Our living room is long and narrow, with our TV on one of the long walls so, in any event, it would have been an awkward layout with cables from the TV.

So, I went lengthways, positioning the box at one of the ends and running the cables around the skirting boards into the various corners.

The sound was smooth and even throughout the room – I paced back and forth quite a few times to see if I could catch a midpoint between the two zones where the sound dropped or was less coherent. There was none. I could sit on either end, or right in the middle of the room and still have a complete listening experience.

Setting the system up in my other half’s place, we placed two speakers next to the TV and the other two on either side of the couch behind us. His living room is a smaller, square shaped room with wooden floors, and you could notice the difference right away. The sound was clear and rich, giving the feeling of complete immersion.

We tested it a few different ways – a good noisy Marvel movie that night and, for the sake of curiosity, we added his soundbar to the equation (running through a different TV channel) to really blast the sound up from the front.

The following morning, we cranked the system on for the All Ireland Football Final, streaming from an app on my phone. I felt like I was IN Croke Park listening to the national anthem, it was glorious! 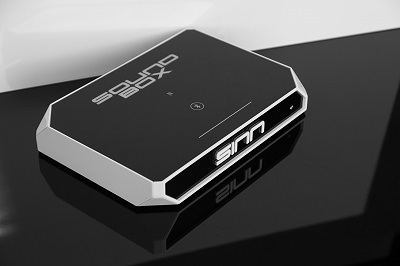 The SinnSound box is a great, relatively budget product for those keen to upgrade their audio offering. I see it being the perfect addition to a mancave or a multifunction garage – you could get a great sound going in a makeshift home gym, providing wiring isn’t a turn off for you.

In my mind, it’s the type of setup that you’ll use somewhere where you can tape wires into the carpet or skirting board without fear of damaging infrastructure. Or, if you’re handy with a hammer and some nails maybe you’ll find some other inventive way to conceal the wiring.

One bugbear that I found on using the unit with a TV was the relatively short time before it went to automatic standby which we only noticed on resuming what we were watching. I appreciate the need for a standby option but, to me, it seemed mercilessly short.

All in all though, the SinnSound box does a stellar job of creating a rich, clear and warm sound palette that can fill even the stranger shaped rooms perfectly from corner to corner.