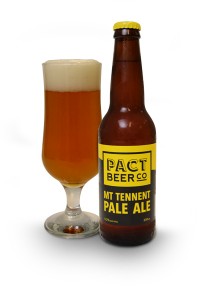 In 2015, three mates made a pact to brew great beer and never compromise on flavour, quality and creativity.

Pact was born in a tiny Canberra kitchen. Every Pact Beer starts as a handmade and homebrewed prototype. From the kitchen, we test it out, tweak it around, and then scale it up to brew ‘gypsy style’ at some of the finest breweries in the country with an embrace only Pact can provide. Once the yeast has done its job, we ship countless kegs and bottles of tasty beer across Canberra and around Australia.

Inspired by the flavours and aromas of malt, hops, and the special touch that only 50 billion yeast cells can provide, our beer recipes extend upon the classic style foundations wrought through thousands of years of beer making. Always brewed with food pairing in mind, our beers are inventive and interesting but never overbearing.

Tasting notes from the brewer: Inspired by the picturesque mountain and the legend of its bushranger namesake, the Mount Tennent Pale Ale walks the tightrope of accessible, sessionable and mindblowing all at once. It’s a tantalisingly hoppy and sessionable American Pale Ale with touches of tropical and citrus fruits.

"Go tell it on the mountain."

Now here’s a brew that reminds me why I love craft beer so much – because every now and again you stumble on a beer that is an absolute joy to drink. Mt Tennant Pale Ale is a robust, creamy brew with just the right balance of hoppy-goodness and delicious bitter finish.

Would I buy it again?
Yes ...and again and again.

"All hail this Pale Ale."

As the bitter cold of a Melbourne winter dawns upon us, this beer makes me want to jump on the next flight to Hawaii to drinks bottles of these stunning beers on Waikiki beach. This very refreshing beer is perfectly balanced without any overbearing flavours.

Would I buy it again?
Absolutely, this is now one of my favourite beers.

I'm a huge fan of pale ales and this one quickly crept into my list of favourites.

It's difficult to find the perfect balance between tasty hops and drinkability in my opinion; therefore, when I stumble across a delicious pale ale that can be indulged in all night, I'm sold.

If you haven't wrapped your gob around one of these winners, I suggest you go and do so,

In reviewing this beer, I wanted to find out more about its namesake, Mt Tennent, so I could draw a witty comparison between it and someone famous who once called it home. So, what did I discover? Nothing.

Nothing or nobody of note has ever hailed from Mt Tennent... until now (and not just by default).

The Pact Beer Co’s Mt Tennent Pale Ale is yet another beer that challenges my belief that pale ale is the spawn of Satan or the lovechild of Naomi Robson and a hipster. It’s actually really quite good. It’s very drinkable and, unrelated to pretty much anything, the bottle in which it comes sports a rather fetching label.

Would I buy it again?
Yep.