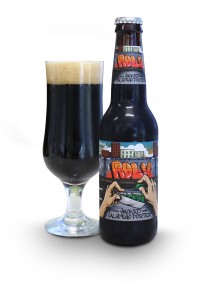 Hailing from Sydney’s south, Stockade Brew Co are the (relatively) new kids on the block. Despite only being around since October 2015, they’re not total rookies. Between them they have decades of brewing experience, and a fairly unique background in the industry.

Offering a core line-up of four sessionable beers and an ambitious roster of monthly limited edition brews – all coupled with striking artwork – there’s never a dull moment when it comes to Stockade beers. The team’s 2016 brews have so far won in excess of 26 awards across the likes of the Australian International Beer Awards (AIBAs), Craft Beer Awards (CBAs) and World Beer Awards (WBAs), where it won the title of “World’s Best Imperial Stout”.

What is it?: The Roly Smoked Jalapeno Porter is a beautifully rolled, robust porter made with jalapeños, a hint of chocolate and a slight smoked beechwood aroma.

I wanted to try this beer purely because of the graphic art label and the name but unfortunately it didn’t live up to either. The smoky taste comes through fairly strong, as does the hint of chocolate/coffee but I couldn’t taste any of the jalapeños kick.

I’m not a fan of stouts and porters so it’s probably no surprise that I found this beer too heavy to finish. I tried it for the novelty of the jalapeños and was left disappointed.

Would I buy it again? No

“Saucy, but not in a good way”

As a lover of dark, heavy beers I was really looking forward to this one. I have to say though, Smoked Jalapeño Porter is trying just a little too hard. There is a distinctive sweetness that is a little too barbeque saucy to be pleasant. I couldn’t finish this one, and that’s a first.

Would I buy it again? Hells no.

I honestly never thought I would see the day that I rated a porter-type beer higher than Jacob; but, where he hated this drop, it left me confused.

First, you can't taste jalapeño, which is great for me because even the slightest bit of heat leaves me running for the hills. This makes me think it's a complete gimmick: get the adventurous folk in with the promise of a jalapeño kick but not deliver. In reality, it tasted a bit like a chocolate-infused Vegemite coffee, but a little insipid with no strong aftertaste.

The way some of my colleagues carried on made me incredibly hesitant to try it, but now I'm left confused as to what the fuss was all about (the same feeling I get when I see a movie starring Julia Roberts, to be honest.)

Would I buy it again? Nah.

Expectations weren’t high going into trying Roly’s Smoked Jalapeno Porter with the label resembling something similar to Snoop Dogg’s debut studio album, Doggy Style. Upon putting my nose to the rim of the glass, a powerful “smoky” smell erupted up through my nostrils and my entire face screwed up; “oh, boy” I thought to myself. After the first sip, I was pleasantly surprised as the spice factor wasn’t too much to scare me away, but also not non-existent so that the name wasn’t just there for show. Despite it being better than expected, I can’t say I’d go back to this any time soon or in any type of hurry.

Would I buy it again? Um, no thanks.