Trending
You are at:Home»Hobbies»Boating»Just add water

It’s quickly approaching that time of year when board short and beer manufacturers start licking their lips in anticipation of booming sales.

There’s just something special about summer time. The air smells sweeter and people’s moods are generally lifted across the board. Penguins would probably disagree but at least they’ve got the water to keep them cool. And that’s where we focus our attention because millions of Aussies spend their time either immersed in it or beside it when temperature gauges start soaring above the 30°C mark.

It isn’t all about swimming, tanning and drinking though. There are plenty of activities available to keep you entertained on the water and the crew from ManSpace has found some crackers to help you enjoy your time just that little bit extra this summer. Just remember to slip, slop, slap while you’re out there because sunburn doesn’t suit anyone.

Surfing is one of Australia’s iconic pastimes, but unless you’re a seasoned pro, or amongst the waves regularly, paddling out beyond those initial breaks to get to the good sets can be tiring work. This was a problem that was heightened for Chris Preston.

After busting his knee and undergoing a shoulder reconstruction, he found his favourite pastime slipping away from him. So he decided to come up with a solution.

Enter: Power Board – the motorised surfboard.

The clever concept allows you to simply lie on the board, press a button and engage the motor, which moves you through the surf with ease. Alternatively, for more speed while catching waves, you can position your foot on the button – giving you a little boost to bust through a closing barrel.

Thanks to intelligent design, the motor is hidden inside the board itself, while the propeller is built into the fin. Water is pulled through the front of the propeller tube and then pushed with force out through the prop itself, carrying you along.

Unlike similar products on the market, the technology uses a lithium ion battery, making it easy to charge – you simply plug the board into a standard home outlet and it will be ready to use again in 35 minutes.

The board itself will also output around 35 minutes of continual running time at 7kmph. This equates to around 1.5 to 2 hours out on the water. It’s a product that is inevitably going to have its sceptics, but it definitely has a practical use for those in need. But if you still don’t like the idea of using technology to help you catch a wave, not to worry, you can still use it with the motor switched off. Maybe just switch it on when you get tired so you can have an extra hour in the ocean. We won’t tell. 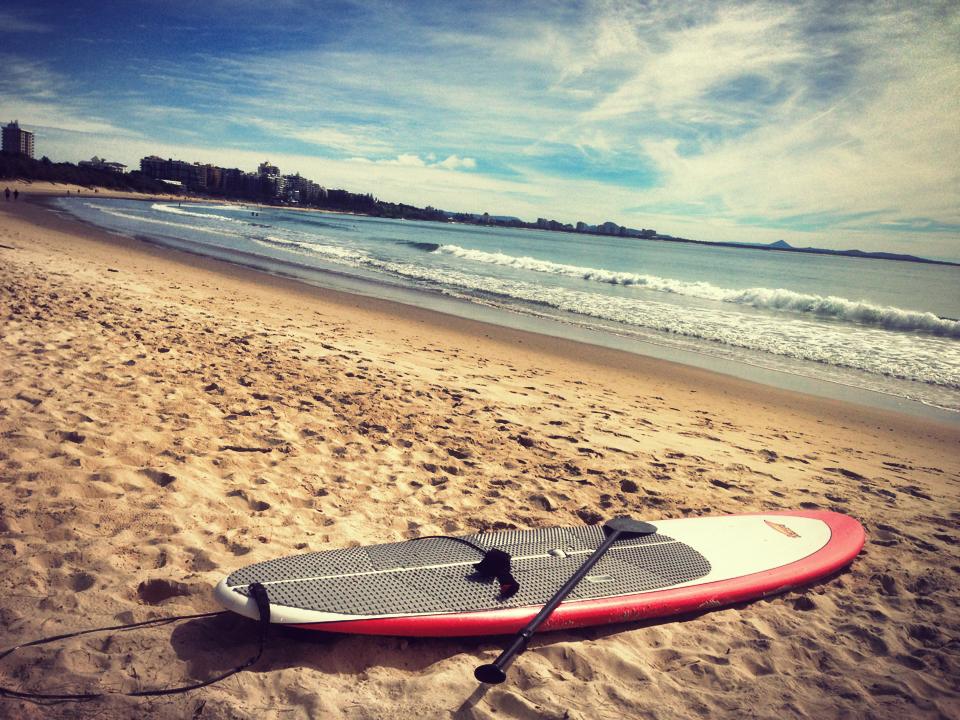 You know you want one.

Most of us have thought about buying a boat at one point in our lives, but there are usually two main things that hold us back: space and money. Maritime hobbies aren’t cheap, and we’re not just talking about the cost of the boat itself – there’s a host of other expenses, such as mooring fees and insurance.

When it comes to the issue of space, trying to convince your partner to allow a boat in the garage is a task unsuited to the fainthearted. We actually wouldn’t recommend it to anyone.

One company that feels your pain is Quickboats and as such they’ve introduced a folding boat – yes you read that right, a boat that folds. The craft can be assembled in just 60 seconds and can be launched from anywhere with water access. When folded it packs flat to the size of a paddle board, so you can easily fit it on your car’s roof racks and store it in the garage or under your bed (if you’re that kind of guy).

The flatpack means you don’t even need a trailer to tow the Quickboat around.

When assembled, the boat is 3.7m long and 1.7m wide, allowing it to fit four adults comfortably. It doesn’t skimp on performance either. When in enclosed waters, the boat can reach speeds of 20 knots (37km/h when used with a 9.8hp motor).

If you’re really trying to curb your spending, you can opt for a 5hp motor so you don’t need a recreational skipper’s ticket, and because of the nature of the build, you save on trailer and boat registration.

So if you don’t have the space in the garage, or you just want to impress your mates by popping up a boat in less than a minute, jump aboard the Quickboat and see what adventures unfold. 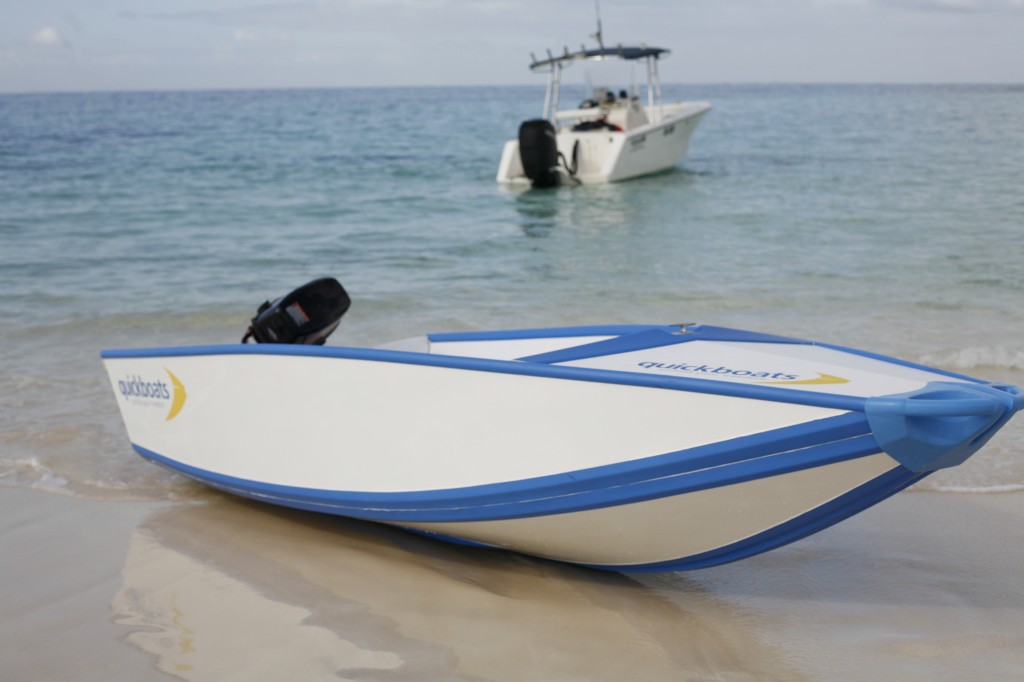 ’Sup is no longer just an annoying phrase that has replaced real words and phrases like ‘hello’ and ‘how’s it going?’ SUP is an acronym for Stand-Up Paddle boarding and the sport is gaining popularity at a rate of knots. If surfing and kayaking got together and had a child – this is what it would look like.

Also known as Supping, Stand-Up Paddle boarding hails from the surf rich beaches of Hawaii where surfers would stand up on their boards to gain a better view of oncoming wave sets. They started to notice the physical benefits of the activity and it soon became a sport in its own right. The rest, as they say, is history.

SUP is a unique sport that only requires the use of a large board, a paddle and a body of H20. With such little equipment required and a new way to experience the water, it’s easy to see why the sport is growing so quickly. SUP not only makes for a great time with mates but also provides a great workout that strengthens core muscle groups and improves balance and overall fitness.

Stand up paddle boarding has taken the seas by storm… if you’re game, why not give it a go this summer.

Participants can paddle in any body of water depending on experience level and for those who want to give it a go but aren’t sure how, don’t fear, there is plenty of tuition available around the country. SUP instructors will show you how to hold your paddle correctly, proper stroke methods and how to choose the right board.

For something different this summer – why not give Supping a go? Start out on the bays and estuaries before venturing out into the blue though. It’s a scary place if you don’t know what you’re doing. Who knows, you may just discover your new favourite hobby. If nothing else, you’ll end up with a really long coffee table for the man cave.

There’s something very cruel, but ultimately incredibly amusing, about scaring your friends and family when they’re trying to relax at the beach. Whether this involves swimming near them with your hand mimicking a fin, or sneaking up behind them and grabbing their leg to imitate a bite, they’re jokes that never seem to get old.

Being on the receiving end of one of these isn’t quite as funny though. So, if you want to take this to the next level, and blow things completely out of proportion, the Seabreacher X could be your ultimate ticket to revenge. At 5m long, this submersible watercraft is shaped like a shark and can even be customised to look like a great white.

Even more impressive: the vessel can sustain high speed dives and then breach the surface, launching it clear out of the water, jumping 3.5-5.5m into the air! Jumping isn’t your thing? No worries, you can cruise along at a leisurely 80kmph on the water’s surface or even reach speeds of 40kmph underwater. 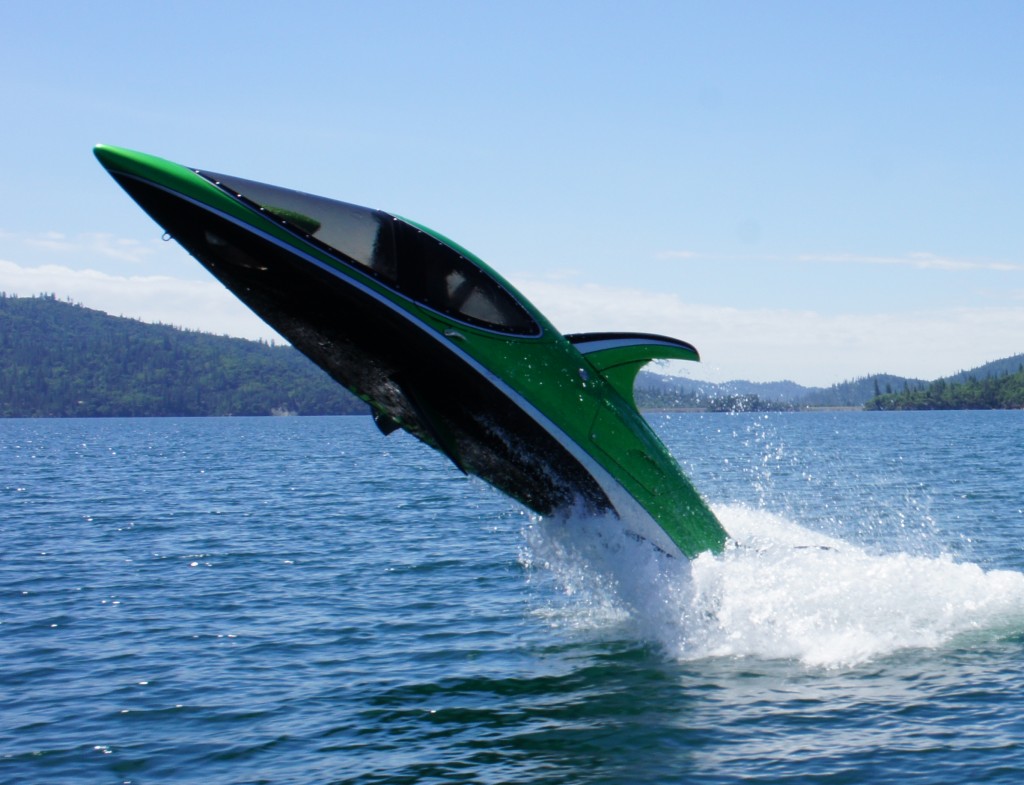 The Seabreacher is like nothing you’ve ever seen before. Imagine carving up the seas in this thing.

Step inside the cabin and you’re greeted with a whole host of high tech equipment – a snorkel-mounted video camera that can transmit live video to LCD screens for the pilot and passengers during dives, GPS navigation and onboard stereo with iPod docking.

Each model is custom-built to order – there are currently no production units made for immediate purchase. The company adds that the product is aimed at ‘people with a disposable income looking to experience the ocean in a totally new way’. You can’t argue with that – the Seabreacher X is sure to blow your mates’ boats out of the water. Or at the very least, give a few people a scare on the beach.

Kayak fishing has really taken off over the past few years as anglers are finding great merit in the sport and the many benefits it presents over its land based and boat based cousins. Firstly, kayaks allow anglers to access some extremely skinny and shallow waters that other anglers can’t fish due to a lack of accessibility. Secondly, kayaks are a lot more economical to run as there are no launching fees to pay, no thirsty motors to fill and you can slap them onto a set off roof racks so there’s no need for atrailer and associated maintenance costs.

On the flipside, people are frightened to hop in to one due to stability issues, a lack of energy to paddle or fear of the unknown. For those that are curious though – the Freedom Hawk might be up your alley. 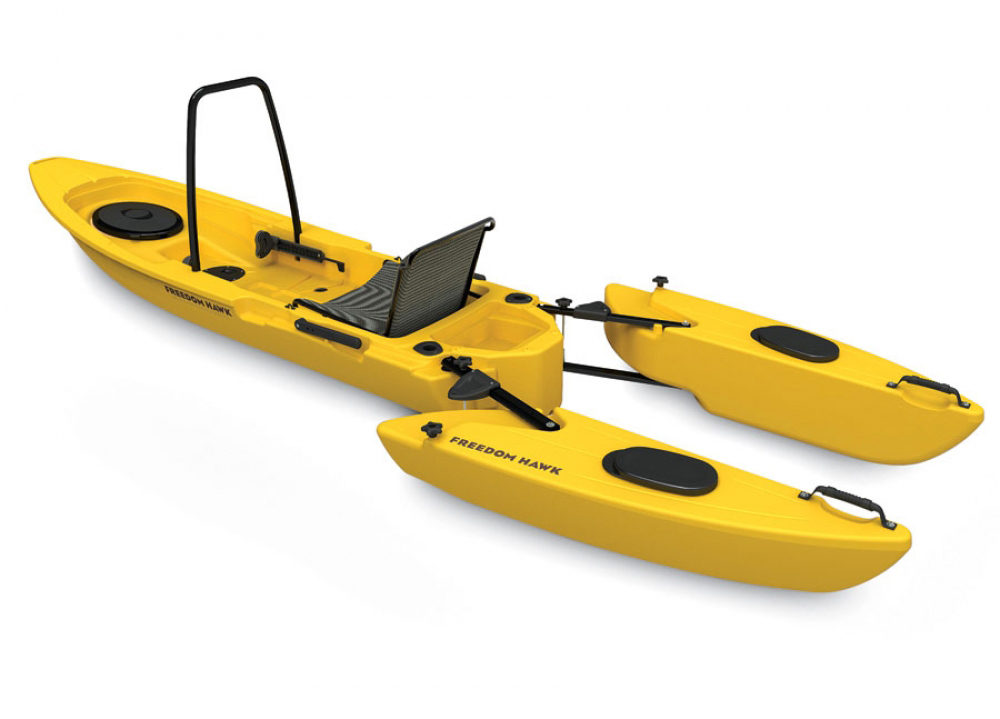 The Freedom Hawk provides a great sturdy platform due to the strong construction and addition of the outriggers towards the back of the vessel.

The Freedom Hawk features a patented inline outrigger system, providing anglers with a choice of three positions. It paddles like a conventional kayak when in the first position. Position two offers additional stability when fishing or rigging a rod. The third position fully extends the outriggers into their inline position for maximum efficiency when paddling, fishing, or motoring – yes motoring! The Freedom Hawk is available with an optional motor mount that can facilitate an electric Watersnake. Now you don’t even need to paddle and because the motor is electric, you won’t spook the fish before sending a bait or lure in.

When the outriggers are deployed, the kayak’s stability is second to none and stand up fishing is not only possible but encouraged. If you’re still not convinced, a casting brace is provided for additional stability when standing. So rather than spending your morning stuck at a boat ramp, hop into a Freedom Hawk kayak, launch wherever you want and reap the benefits of a stealthy yet stable platform.