Trending
You are at:Home»Hobbies»Collections»Collecting Sweet Memories

Greg Potent is mad about Pez dispensers – so much so that he’s managed to accumulate over 600 of them in his first year of collecting them. Callum Fitzpatrick finds out about the man behind this sweet collection.

It doesn’t matter whether you’ve amassed an array of vintage cars or you simply hoard the bottle caps from the beers you drink – a collection is something to take pride in, and it’s ultimately one of man’s most rewarding pastimes.

Greg Potent has collected over 600 Pez dispensers in his first 12 months of collecting them.

We embark on this seemingly-strange activity of accumulating random items for many reasons. It could be because of a fascination or allegiance with a particular product or brand. Other times it’s the lure of completing a set – although very few collections are ever finished. Then there’s the appeal of being part of a like-minded community that collects exactly the same thing as you, yet somehow has a completely different selection of relics.

When Greg Potent decided to embark on a new collection, his reasoning was driven by a mixture of the above. Now he’s an avid collector of Pez – the iconic plastic candy dispensers that are topped with the heads of famous cartoon and pop culture characters.

Originally introduced in Vienna, Austria, Pez candy was initially a compressed peppermint sweet served in cigarette lighter-shaped tins and touted as an alternative to smoking. It wasn’t until 1952 that the company introduced the product to the US (who brought it to the mass market). In 1955 the Pez company made its game-changing move – placing heads on the tops of the dispensers and marketing the products at children. Unsurprisingly, Santa Claus and Mickey Mouse were two of the first characters released.

Although the dispensers often sell new for around $3 in Australia, collectibles, rarities and factory prototypes are worth much more. At Pez conventions around the world, collectors will pay thousands to get their hands on the rarest of models. Three ‘political donkey’ models are said to be the most valuable dispensers available and these are valued at over $US13,000 each.
Greg started his collection just over a year ago – which makes him a newbie in the world of Pez collectors. However, even in that short time he has amassed an incredible 600 dispensers which he proudly displays in his home office.

Originally a Star Wars collector, Greg used to flaunt his mint condition figurines in their packaging on the shelves of his office. However, when his daughter was born, he had to put a hold on his collection – and it probably wasn’t for the reason you’d expect. The increased responsibility of fatherhood had very little to do with it.

“Once she started to crawl I could see that she wanted to open up my figurines and prise them out of their packaging!” Greg says. “I could see it in her eyes! I didn’t trust her, so I Iocked them out of reach in a cupboard where they have sat for years.” 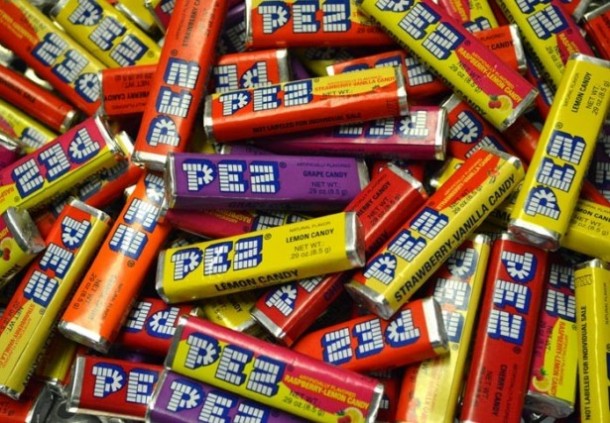 The sweet goodness hiding inside the dispensers come in a variety of flavours.

Then last year, when Greg’s daughter turned nine, he decided he wanted to start a collection they could work on together. After toying with a few ideas, one of Greg’s work colleagues suggested that they should start collecting Pez.

“Ever since she was an exchange student in the US, my work mate had been collecting Pez dispensers. I soon found that they were the perfect thing to collect – they’re small, reasonably priced when they’re new and they come in heaps of different colours and characters.”

Greg says that his dream Pez is a 1960s baseball glove, bat and ball dispenser affixed to a home plate stand, and it’s worth a few hundred dollars. However, the favourite in his collection is a “Jerry’ from the legendary Tom and Jerry cartoons.

“I was lucky enough to win an eBay auction on this misfit Jerry dispenser. It has no painting on the dispenser – it just has the background plastic colour, which makes it really special. I don’t know what it is about him that’s so enduing – he just seems to have a lot of character and stands out among the rest of my collection.”

“I also made a trade for some awesome Austrian limited Pez dispensers. Three of them were issued for World Banking Day and there was a green policeman that was given to school children after they completed a traffic safety course. They’re really unique. 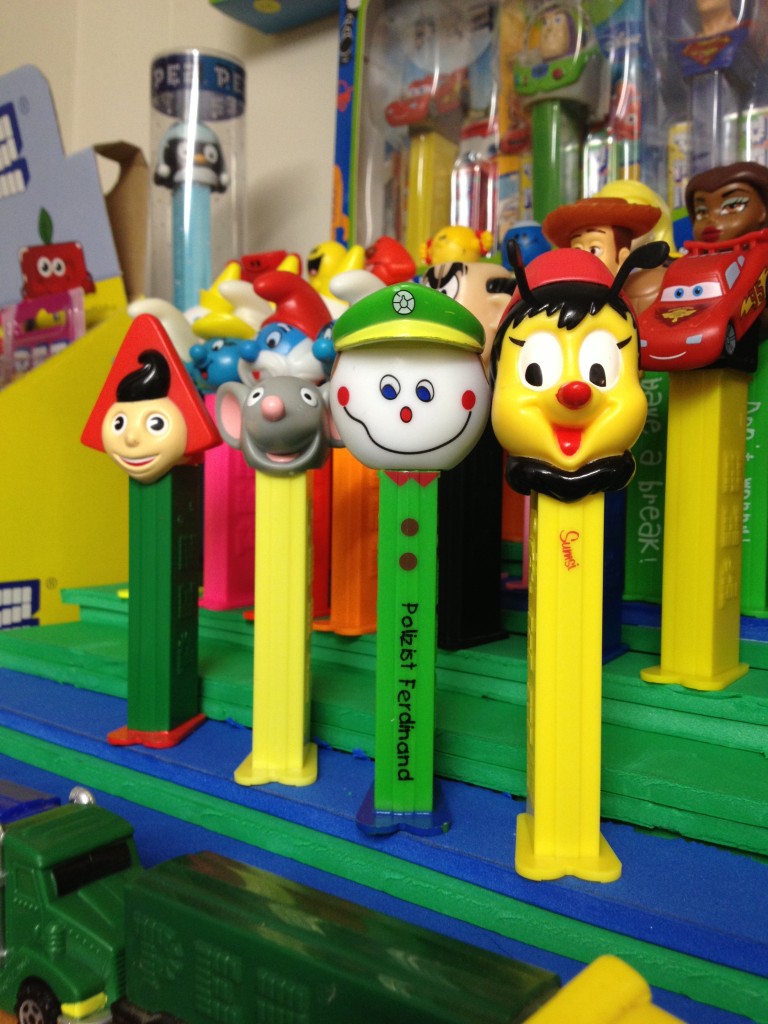 In 1955 the Pez company made its game-changing move – placing heads on the tops of the dispensers and marketing them towards children.

“Also, in Australia we were lucky to get our hands on some limited release dispensers. They were emoticons – the smiley faces you see in text messages. These six are only available down under which makes them wanted by collectors all around the world. Three more are set to be released soon, so I’m pretty excited about that.”

Collecting Pez dispensers is inevitably less common in Australia than it is in America and parts of Europe – the places they’re produced – but Greg reckons that this creates even more of an appeal and he loves the challenge it brings.

“Finding Pez dispensers can be pretty tricky in Australia, especially if you’re trying to get your hands on some older models,” Greg explains.

“It’s easy to get hold of the latest releases from Coles and Woolworths whereas Ebay and Gumtree are great places to find older units. You can also get lucky at a garage sale, but that doesn’t happen very often.”

There are currently two Pez offices in the world – one in Austria and one in the US. They often share and swap designs, but sometimes they will slightly change a set, which Greg says can make them even more difficult to collect. An example was the collection that was launched alongside the Pixar film, Monsters University. The US version of the set had four characters, whereas the one that was available in Australia only had three. To most of us, this wouldn’t sound like a major difference, but to Pez aficionados, this means that there are two entirely different sets that they have to get their hands on.

“The majority of Pez in Australian shops are European in origin, but we don’t get all the sets sent over, which is annoying for a collector who wants them all. Limited US Pez can be found in some stores, but they often come at a higher price and they can be incredibly difficult to find the entire set,” Greg says.

“There is a great Pez community online where collectors around the world look out for each other. I have traded or received Pez from the USA, Israel, Austria, Chile, UK, Spain, France, Sweden, Canada, Croatia, Hungary and Japan. It’s amazing that I have been able to grow my collection with the help of people in the far reaches of the globe.

“Hopefully one day we can get enough collectors together to have a convention like they do in other countries around the world.”