Thinking of throwing that rusty old bicycle out? Do your car rims need sprucing up? Chrome plating could be your answer, writes Callum Fitzpatrick.

‘Upcycling’ has become one of the key buzz words of the past few years as we progressively move into a more environmentally conscious and recycle-savvy world. The opposite of downcycling (where products are converted into materials of lesser quality) upcycling involves converting old or waste materials into products of better quality or environmental value.

It’s a great initiative, and it’s something that many vintage car and motorbike enthusiasts have been doing for years by fixing up old parts. Often it’s too difficult, expensive or simply impossible to find a replacement, so you’re forced with finding a way of bringing it back to life. 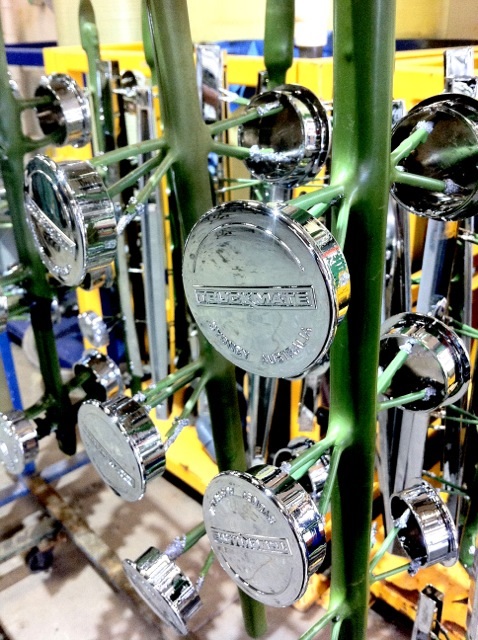 Electroplating can preserve your car parts for years and produce an eyecatching shimmer.

One particularly glamorous way of reviving old relics is through chrome plating or electroplating – the process of coating a metal object with a thin layer of another metal. As well as a restoration method, it can also be used to pre-emptively protect metals from corrosion or to thicken undersized parts.

But of course, some blokes just want to add some shine to their prized possessions.

During electroplating, the depositing metal is dissolved in solution by means of a positive and negative charge. Metal is then transferred onto the substrate, which eventually becomes part of the molecular structure of the component.

The process itself sounds complicated, but in practice is quite simple. It all depends on the condition of the existing artefact and the metal you choose to coat it with. Oh, and you’re going to need somebody who knows what they’re doing and is willing to take the time to do it properly. That’s where The Chrome Factory comes in. Part of the plumbing solution group Enware, The Chrome Factory is a one stop plating shop for electroplating, specialising in restoring anything from boats, cars and motorbikes, to tapware and jewellery. 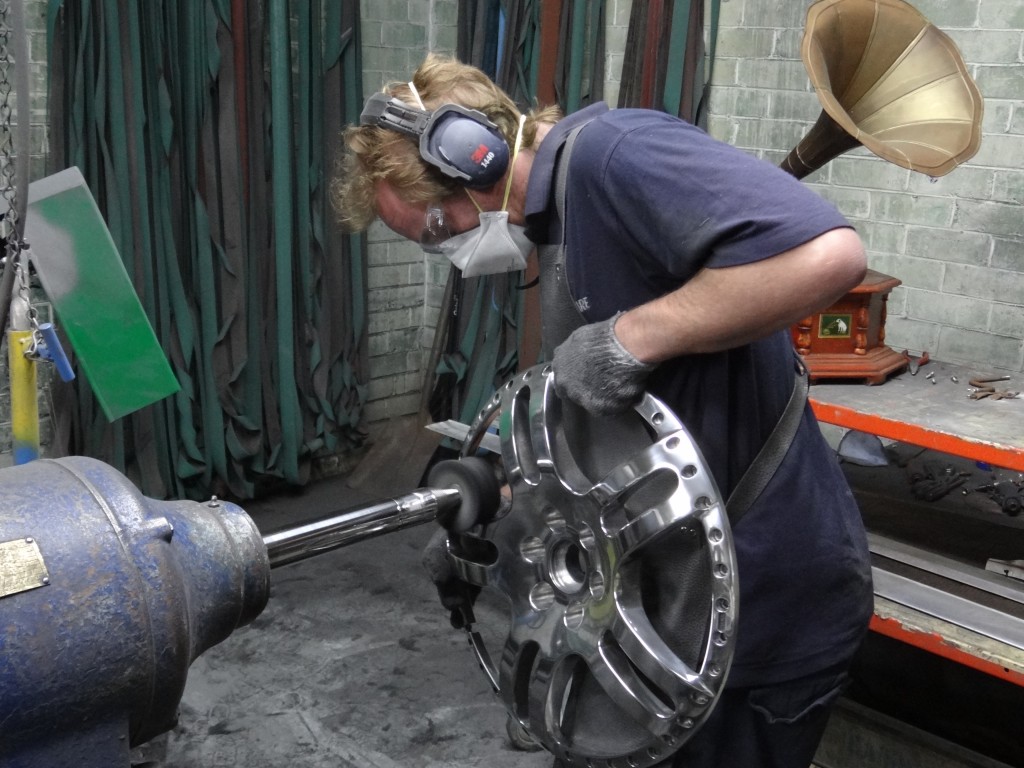 The polishing stage is critical as plating highlights any imperfections that aren’t removed.

The shop’s manager Phil Rozario says that many of its biggest jobs come from blokes wanting to get their cars looking top notch before a show, or for those motor enthusiasts that just want the ‘bling’.
“The Chrome Factory started as part of Enware Australia in 1999 and since then it has just grown bigger and bigger. We get a lot of guys coming in looking for a way of sprucing their car up before a big show, or when they have parts that are particularly weathered and need bringing back to life,” Phil says.

He adds that for a routine job, such as the restoration of an engine cover, the typical stages include:

REMOVAL OF ANY EXISTING COATINGS
If any paint is present, this is removed with a paint stripper. Any existing chrome is removed through reverse polarity in a sulphuric bath and any rust is removed by soaking in a hydrochloric acid bath.

REPAIR AND POLISH
If a repair of the part is necessary, then this is carried out. It is then sent to the polishers to remove any scratches, rendering the surface as smooth as possible. This is a critical procedure in electroplating because the plating will highlight any imperfections that are not removed by polishing.

FINISHING
The finishing process differs greatly whether nickel, chrome, copper or satin nickel finishes are chosen. For instance, prior to depositing nickel, a cleaning process is needed. This is done by several proprietary chemicals that dissolve oils and remove debris that might be present on the part. Each chemical process is followed by a water rinse to avoid cross contamination of chemicals.
“Water is a critical commodity for electroplating,” Phil explains. “A typical plating facility can consume 20,000 to 200,000L of water per day. And depending on the exact specifications, a plating process (such as one in a nickel bath) can take anywhere from 15 minutes to a couple of hours.

“As an environmentally friendly company, Enware uses a water recycling process. None of our spent water for rinses is fed into the drains.”

The most memorable project for the team at The Chrome Factory probably isn’t one you’d expect. No, it’s not a classic hotrod restoration or a Harley Davidson revamp – it was when they were required to electroplate a sculptured lobster to be used as a telephone.

I know what you’re thinking… “How didn’t I guess that?” Right?

“It was quite an involved job. We had several discussions with the designer to ensure the material content was correct (aluminium was specified), contact areas for plating were adequate, and that we didn’t have low current density areas where the chrome wouldn‘t be able to adhere,” Phil says.

“The whole project lasted for about a month. It was tricky because the working components had to fit the underbelly of the lobster while still allowing us to chrome plate.”

Phil says that anybody wanting to preserve the life of their prized possessions should put some serious thought into electroplating. 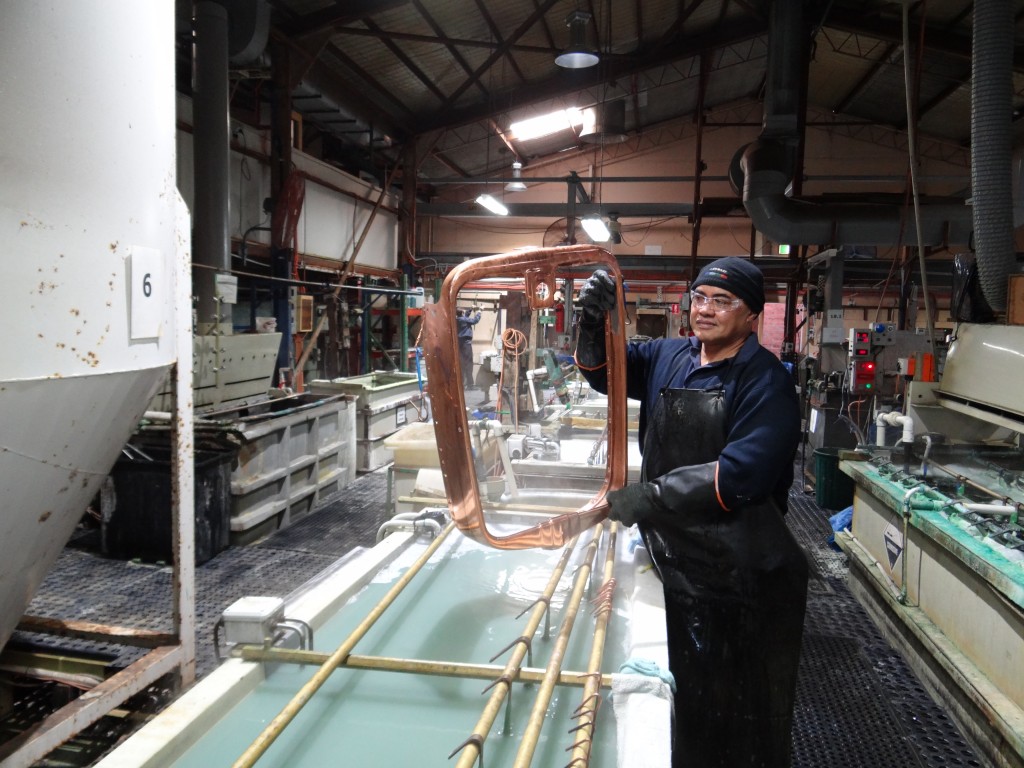 A technician proudly displays his handiwork on a unique bus radiator.

“We make sure that any project brought in for restoration is discussed in great length to make sure we’re both on the same page,” he says.

“Discussion points usually involve a stringent assessment of the existing condition of the material, the quality of the finish that’s required, and whether parts need to be polished.”

The Chrome Factory is now also able to plate on ABS plastics. The only difference is that the plastic is metalised by deposition of palladium prior to electroplating. From here, the process is essentially the same as most plating processes – metals are deposited by immersion or by current.

Phil adds, “Electroplating is very worthwhile if you want to protect the life of something that means a lot to you. It greatly preserves the longevity of the substrate and prevents it from deteriorating. Plus, let’s be honest, you end up with a pretty neat looking finish!”