Trending
You are at:Home»Hobbies»Toy Trains: Out of the Shed and into the Yard

Rail systems were initially built in Australia around 1855 when the country was inhabited by sparsely settled colonies. Plans were made soon after to develop a network of railways to connect major settlements in a bid to alleviate the hardship of transporting supplies and resources by foot or horse drawn carts. It seems a far cry from the elaborate electric trains that now dominate Melbourne, Perth, Sydney and Brisbane… but from little things, big things grow.

Phil was born into an era that would hold fond memories of trains, for they were the biggest mode of transportation at that time.

“The motor car was growing fast but it hadn’t completely taken over yet. People mainly travelled by rail and the rail network in Victoria, where I grew up, was fairly extensive. Other than the high country, there were no suburbs located more than six miles from a railway station. A network of railways existed all over the State and trains really were the principal source of transport and communication,” Phil says. 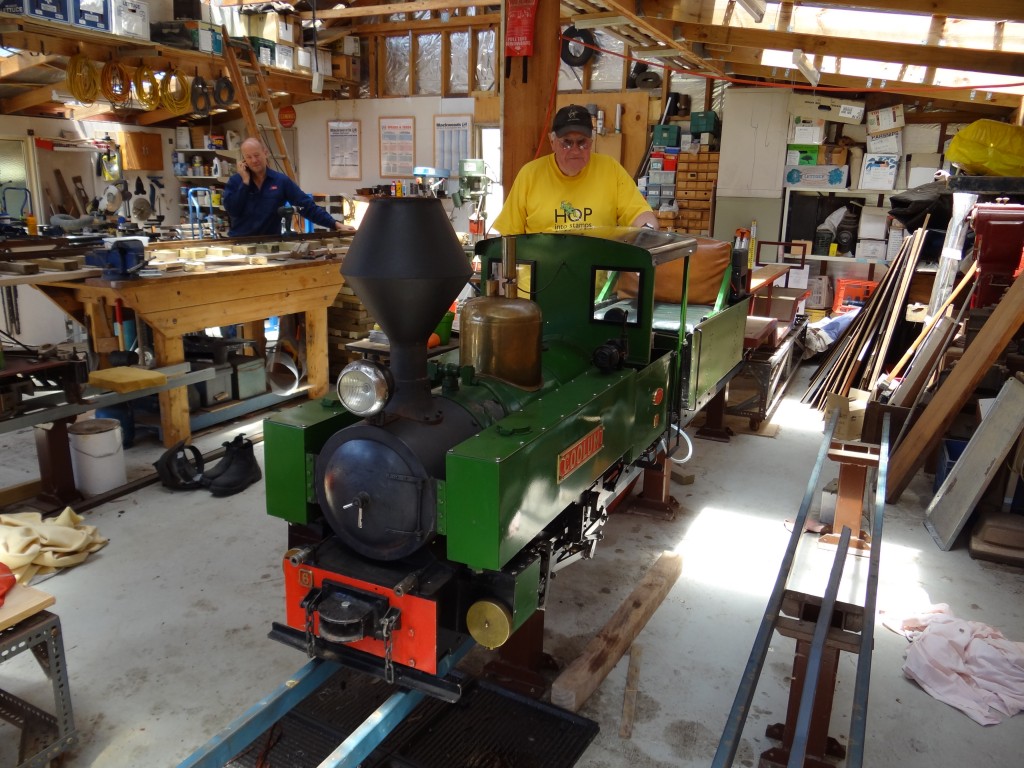 Many people complain about catching the train, but there was once a time when it was the only option.

As we sat and conversed, fond memories begun to fill his mind and the more we spoke, the more I enjoyed listening – he’s endearing and there’s much to admire about someone so passionate about something.

“My first recollection of a train is a train set that my parents gave me. My uncle was playing with it more than I was but I was quite fascinated with this thing that went round and round in circles. From there I just retained an interest in them. I’m not so much what we would call a ‘puffer nutter’ or a ‘foamer’ though. These are guys that count rivets and become obsessed with the history of trains. They unfortunately give people who are interested in railways a very bad name. Politicians often use the terms and whenever somebody displays a healthy interest in railways they dismiss them as some sort of gunsel but that’s another story altogether.”

From there Phil’s interest in trains continually manifested itself and during his primary school years, a bond was formed with another boy who shared a similar interest. As kids, their imagination was boundless and they drew lines with pieces of chalk on the ground before sliding bits of wood together, joined by Plasticine and string, to replicate railways up and down a concrete driveway. 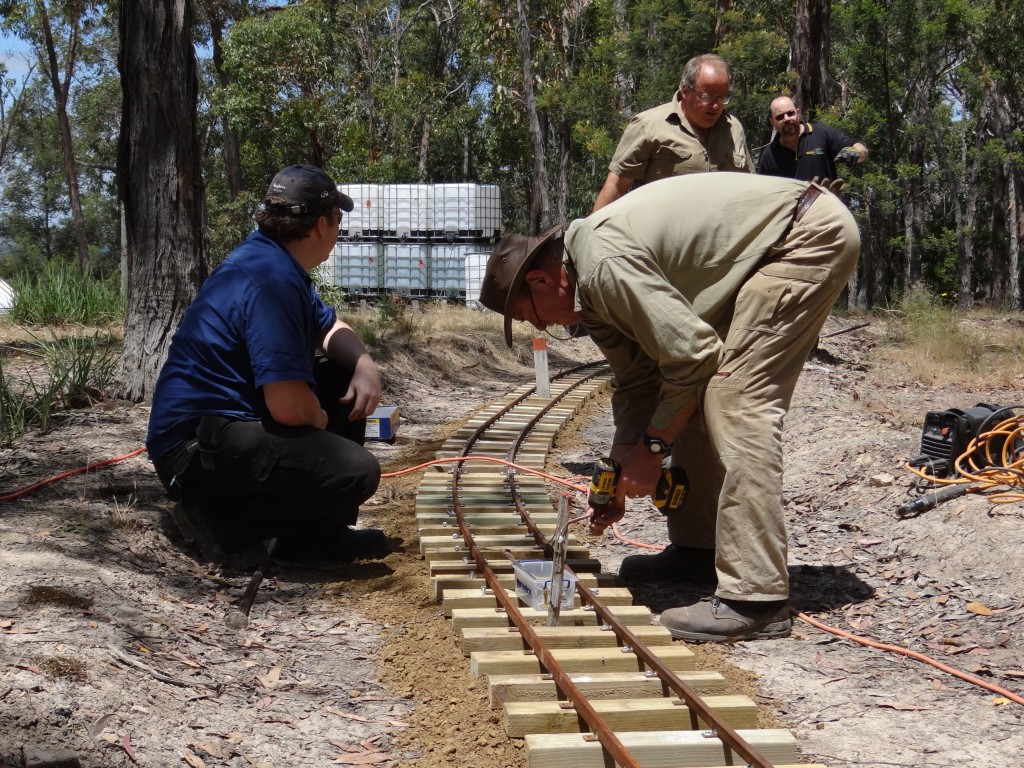 Phil’s train hobby used to just take up the garage, now it’s all over his property.

“Two or three years later we graduated to Hornby train sets and we started to build a fairly extensive railway in a shed in my backyard. We ended up with a railway in a shed in both of our backyards. We started tripping around the countryside in search of various railways but with a particular focus on a certain type. We developed an interest in narrow gauge lines and at age 19 both he and I became foundation members of the Puffing Billy Preservation Society. At the same age I became the secretary while training to be a primary school teacher.”

In those days Puffing Billy had closed down and a group of people had convinced the railways that it should be run again. They had raised some finances to underwrite it and Phil joined them about that stage. There was a committee of 10 and the train was only running between Ferntree Gully and Belgrave.

“My interest was quite broad and I wanted not only to preserve it but open it up as a tourist attraction. At the time I was working in the theatre and because I was available during the day, I was the guy that fired the engine up for the visitors. Needless to say I was a qualified train fireman and being able to work on Puffing Billy really wet my appetite for steam and steam engines.”

Phil worked full-time in theatre and television up until 1966 before theatre went bad. He went back to teaching in a private school for three years, while still working in theatre at night.

“I’ve been around a bit – career wise. I worked for Channel 7 where I became the full-time manager (in the early stages) of a show called Sunny Side Up. When I went to the theatre I became the resident stage manager at the Princess theatre and worked on shows like Sound of Music, Carousel, High Spirits and Most Happy Fella. Theatre is definitely my other passion,” Phil says.

After finishing with TV and theatre, one of Phil’s ambitions was to have his own railway so with time on his side, he started to turn that dream into reality. And he had a group of friends to help him on his path.

“I had an acre of land in Menzies Creek near Puffing Billy but the grandchildren were all living north-west of Melbourne in a town called Riddells Creek. We naturally moved to be closer to them and once I found the block of land that we were interested in I thought ‘Ahh, this is the land upon which I can build my railway’.

“My son has been a huge tower of strength with me on this project. He inherited my passion for both theatre and railways and he now drives what we call ‘horizontal lifts’ all over metropolitan Melbourne. I use to take him to Puffing Billy when he was seven or eight. He had no option but to become a train enthusiast which is great because it means we spend a lot of quality time together while fulfilling both of our passions.

“We surveyed the land with a dumpy level and worked out where we could build the track. We then got stuck into the earthworks and started out by building a loop around the house. I figured it would be good to have something to ride on to keep the guys motivated.” 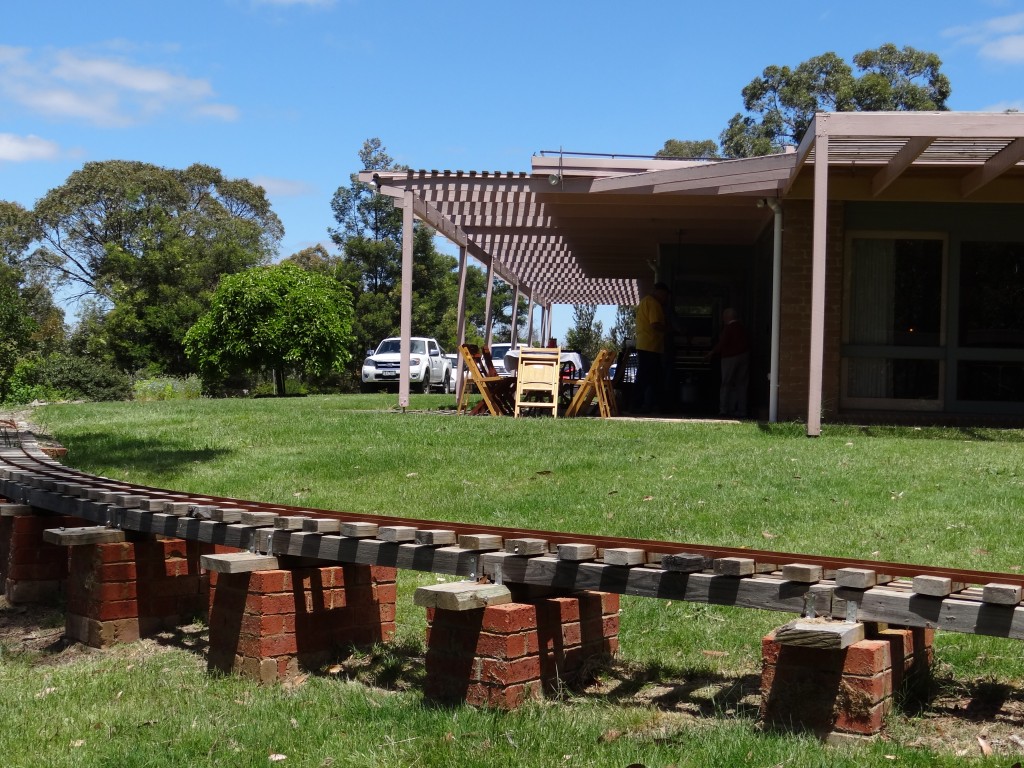 Phil’s backyard train begun with a loop around the house.

Once the initial loop was complete, Phil and the crew started laying tracks around the back of the house where they built a couple of bridges. They built them out of some scrap metal and bricks that were being thrown out at the Melbourne theatre. In fact, the only material Phil has had to pay for is the rail and ballast. The sleepers have all been off cuts of treated timber that he and his son have managed to pick up from various timber yards and garden suppliers. A lot of recycled materials have gone into the production of this railway.

“The whole thing has been planned and designed very carefully and it’s about 80% complete at this stage. I always hoped for the railway to be 600-800m and at the moment it’s 600 metres. At 76 I think it will keep me going for the remaining years I have.

“I haven’t got enough life left in me to build my own trains and engines so I bought them from guys that built them years ago. They came from either deceased estates or people who could no longer look after them. I copied the designs of the carriages from others and had them welded up by a mate of mine.” 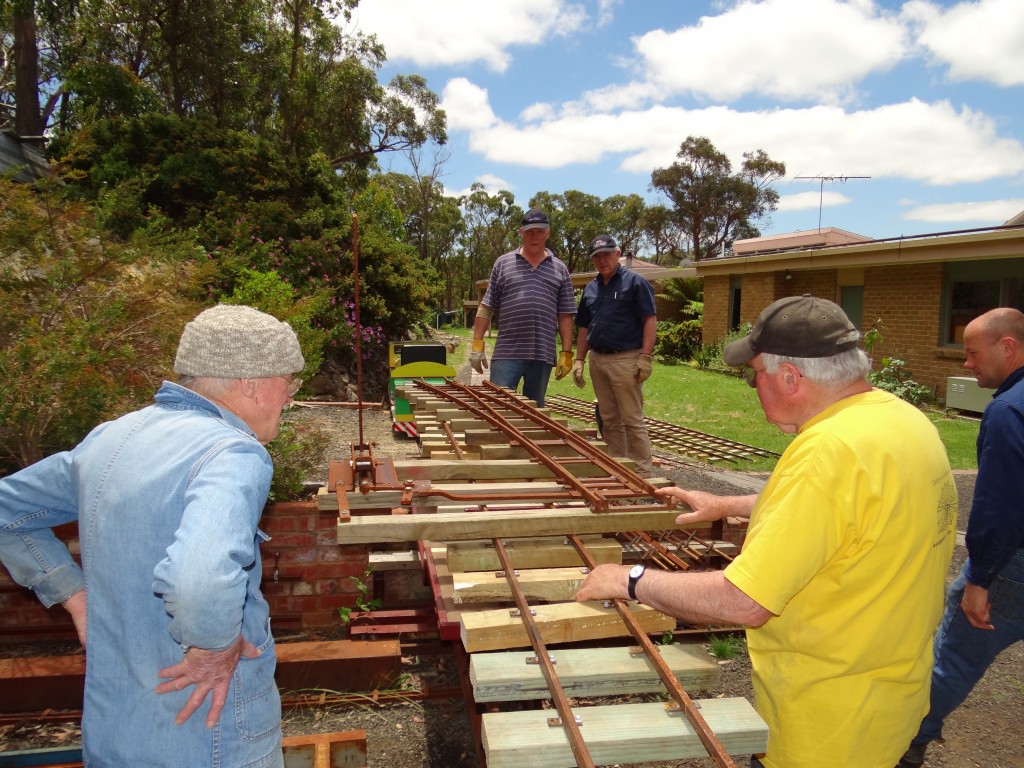 Phil’s train is the perfect excuse to get all the guys over on the weekend.

Speaking of mates, one of the best parts about Phil building his own railway is the excuse to regularly get together with a group of blokes to work on the track while chewing the fat.

“Two of us have railways and the same group of blokes go to his place or mine and put a day of work in every six weeks or so. Working on the railways is very fulfilling but it’s mainly the camaraderie that draws us in.

“We get together and work like mad in the morning before knocking off to have a very happy and substantial boozy lunch to finish the day. It’s a happy, eventful and profitable day for everyone.

“From memory we started building the railway about eight years ago and there is a core group of members who have been there from the first day. Most are friends of friends and a number of blokes worked with me at Puffing Billy. It’s a very diverse bunch too. There’s a bloke who runs a winery, a former airline pilot, an engineer of a hospital and a few former public servants, but one common passion glues us together and that’s railways.”

I was lucky enough to be introduced to steam engines by Phil and his methodical, yet loving approach to starting the engine was mesmerising to watch. Everything was carefully laid out and the joy he expressed while loading the wood and coal was undeniable.

“Playing with steam is still my biggest passion,” Phil begins. 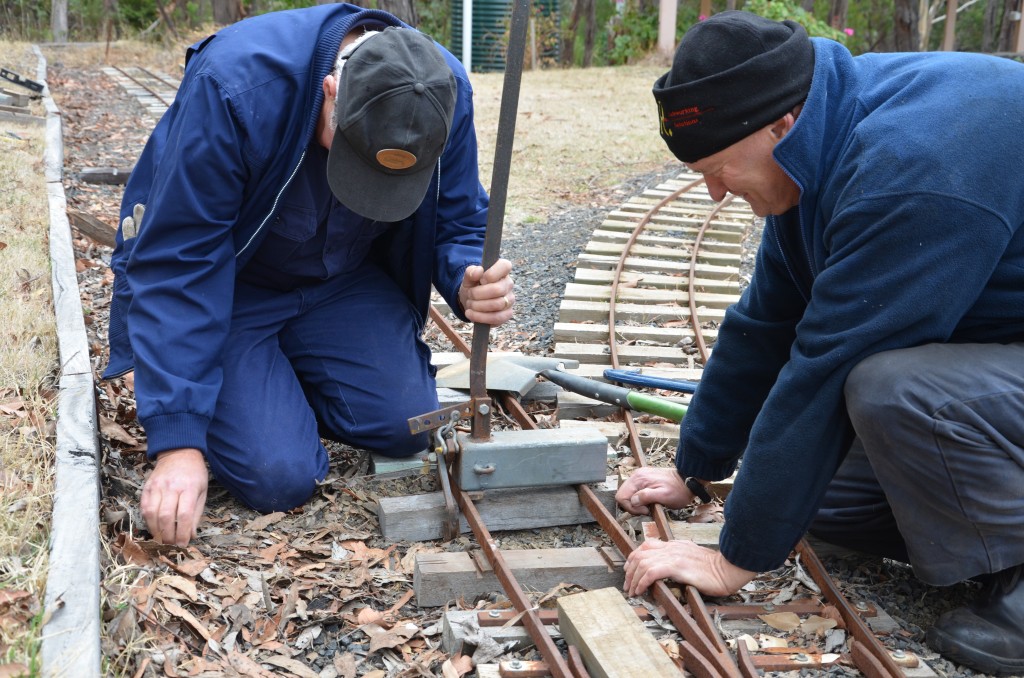 There is always something that needs doing on the rail line.

“Steam engines talk to you. You have to caress them into being from a cold lump of metal and you basically need to nurture them and make them work for you. If you don’t treat them properly they will give you a really bad time. That’s why I have a careful routine as to how I get the steam up. It’s a manifestation of power. The thing about a steam locomotive is you can see all the power, it’s visual, it’s there. With an internal combustion engine all you can do is put your foot on the accelerator and hope it goes.”

Phil pretty well does something on the railways every day. the trains have to be maintained regularly and tracks still need to be laid.

“There are always jobs to be completed, carriages to be upgraded and occasional grandchildren to be entertained.

“I must say though, my railway gives me a reason to wake up every day. There’s always a challenge. I wake up and say ‘today I can do this, this and this’. The day that I stop waking up and feeling challenged by it, I think I’ll be dead.”