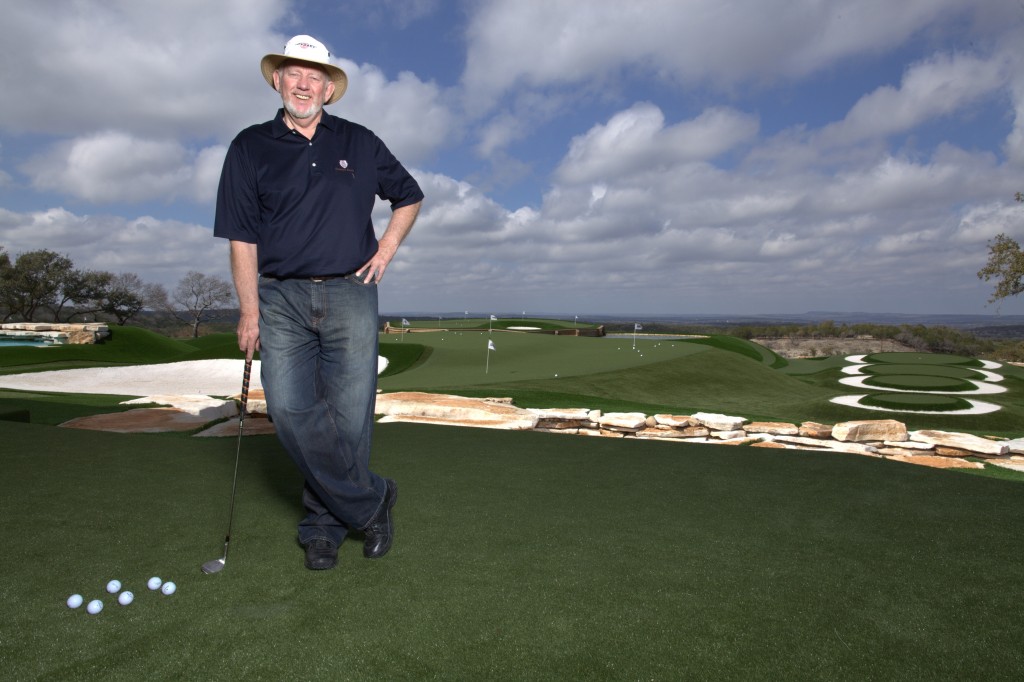 Dave has mentored some of the best golfers in the world on their short game.

Whether you play or not, golf is undoubtedly one of man’s most-loved pastimes. However, it can also be one of the most frustrating and fickle activities known to man. You can find yourself sinking a heroic putt to make par on hole three, but by hole eight you’ve hacked a slicer and lost your marbles… along with your ball.

For a lot of seasoned players, countless hours on the driving range have tidied up their tee shots, but it’s the short game that usually lets them down.

One man who knows this better than anybody, is Dave Pelz. He has built a career and an unmatched reputation as the go-to expert of anything sub-100 yards, mentoring the likes of Phil Mickelson, Vijay Singh, Payne Stewart and Lee Janzen, to name just a few.

You’d think that anything involving a golf course would mean that you couldn’t possibly bring your work home with you when you clock off but not for Dave, who has created one of the best home offices imaginable – a stunning golfer’s paradise across two and a half acres, dedicated to pitching, chipping and putting. 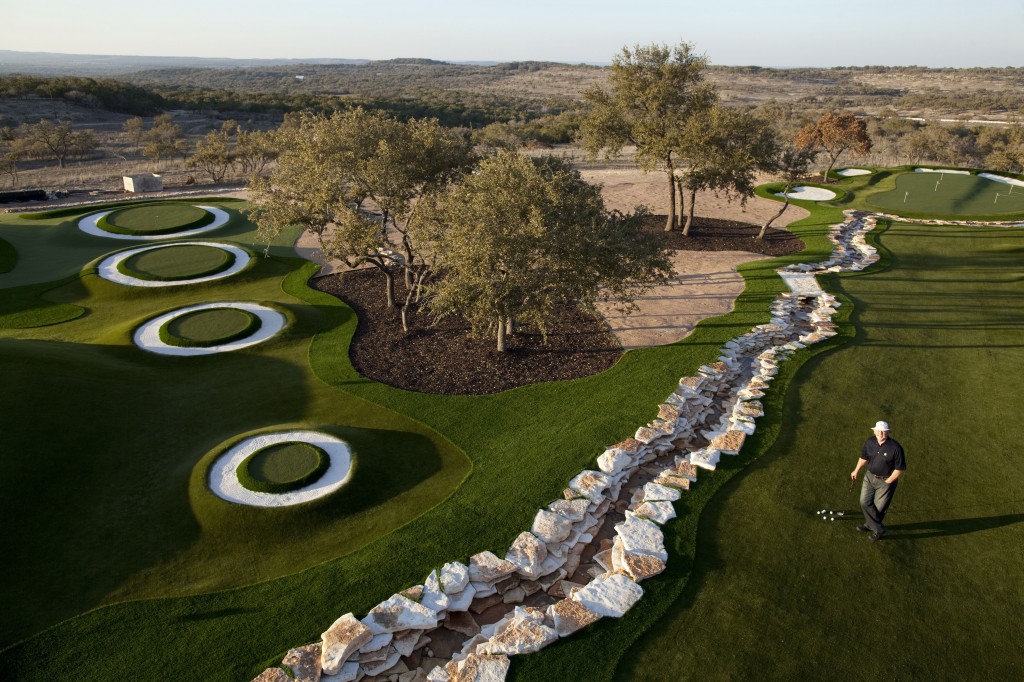 The yard includes dedicated areas for pitching, chipping and putting.

The complex is complete with seven greens (which are replicas of his favourites from around the world), targets to drill 10, 20, 30 and 40-yard wedge shots and a large tee box that allows him to hammer balls to his heart’s content some 80 feet below his hilltop yard.

It’s such a ridiculous creation that the Wall Street Journal even dubbed it ‘the greatest backyard in the world’. We at ManSpace Magazine believe that we’re still hunting for the best in the world, but we collectively agree that this is surely up there.

For him that meant that the greens needed to be high performance, but low maintenance. The secret, it seems, was all in the (artificial) grass.

“I have been studying and working closely with the synthetic turf industry for more than two decades and when I saw the advances in turf-manufacturing and improved installation process, I knew we were on to something,” Dave explains.

“In the old days you only had mediocre turf and cement bases, so the shot-stopping properties were poor for practising wedge shots and putts didn’t roll well on the greens.” 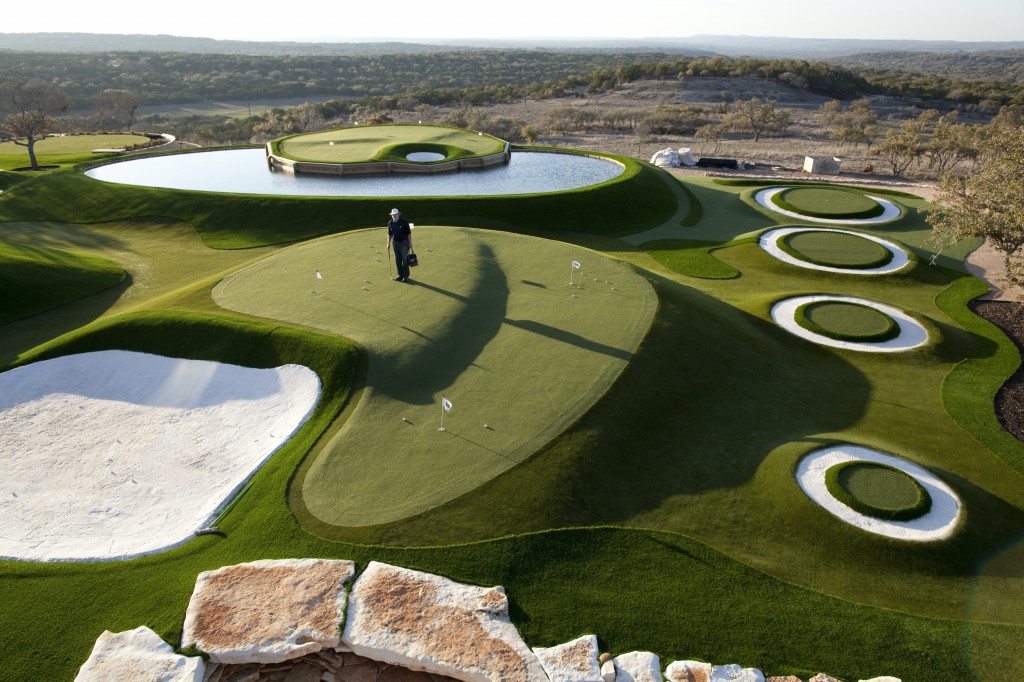 Maintenance has been kept low by using artificial grass.

After years of rejecting opportunities to work with artificial turf companies, Dave was finally won over by SYNLawn technology, which he says is true to real conditions that serious golfers appreciate.

“We wanted synthetic greens that look and play like real golf conditions, so there are three different heights of grass and they are accurate to what superintendents do with real turf grass,” he says.

“Today, with crushed-granite, easy-to-shape bases and some proprietary materials and process that can be used in the installation process, you can have greens that roll well and you can see wedge shots stop and behave as they would on real grass. Once I saw what was possible, my mind started racing with the possibilities. I started thinking about what it would be like to have some of my favourite greens with the actual contours and subtleties. I started drawing plans for what became my dream: to have the greens I loved and the ability to hit any short game shot I want, any time I want.”

These famed greens include replicas of the 17th hole at TPC Sawgrass, the 12th and 13th from Augusta National and the much-feared Road Hole from St. Andrews.

“These are my favourite greens on some of the great golf courses of all time. I’m not saying they’re the ‘best’, but they’re my personal favourites. Each of them is challenging and they have great shot values from all sides that really inspire you as a player. It’s also a privilege to be able to hit shots on these greens every day, because it reminds me of how blessed I am to have visited these remarkable courses through the years.” 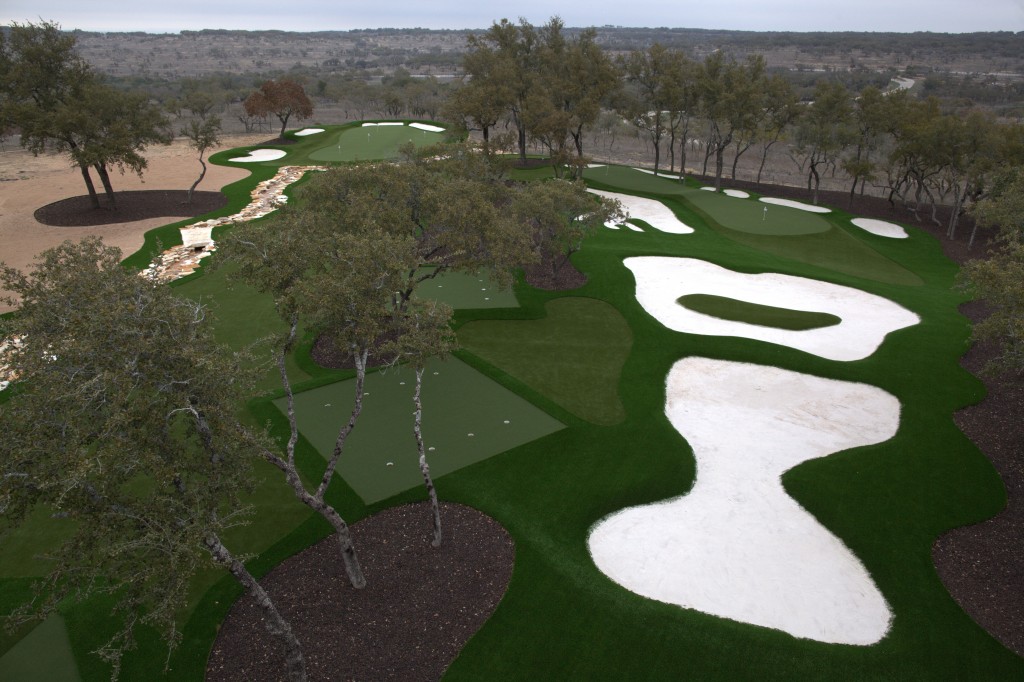 The yard includes some of Dave’s favourite greens from around the world.

However, the age-old saying is that ‘nothing is ever as good as it seems’. Is this true in Dave’s case? Maybe having a golfing paradise outside your back door isn’t all it’s cracked up to be after all.

Well, as it turns out, it is. It really is. It might even be better than you initially thought.

Dave says the novelty hasn’t worn off for him. His favourite aspect is the sheer speed he can get from home to taking his first shot. He’s even timed it – it used to take him 44 seconds from rising in his easy chair in the den to hitting his first ball. Now, by stashing his clubs and balls more strategically, he has trimmed that to just 30 seconds.

“This has energised my golfing life. I hit shots almost every day. I even have a covered patio so I can hit shots to my targets and greens even if it’s raining,” he says.

“I don’t know what golfer could look out the window here and not want to hit shots every day. I play more golf and I’m more prepared when I do play. My wedge game and putting is much more dialled in and it has made the game more fun for me as a player. That’s the message I try to send to golfers – the more access they have to good practice, the better they will perform when they go and play a round.”

Fun it may be, but Dave is quick to point out that this is not a mini golf course or a place to muck around. When PGA Tour pros book in for a training session, it’s strictly business. And it’s clear to see that there is some serious strategy and rationale behind everything Dave does – from the design and implementation of his backyard to his structured training sessions. He attributes this mentality to his time working at NASA.

As a former NASA employee, if Dave does something he does it right.

“We physicists always have to prove our theories. When you’re launching satellites, your data and numbers have to be correct. I take the same approach to teaching golf. I work with the player and together we evaluate where they need the most help and then we devise ways to help them improve.”

Although the majority of us don’t have the money and space to construct anything close to what Dave has designed, he says that even with a modest backyard, you can still optimise your space to work on aspects of your golf game.

“Take an element or two that you really want to practice and allocate the space to practice in your backyard – you don’t have to recreate Pine Valley or Amen Corner. The thing all golfers can truly benefit from is regular access to golf. The more you have your hands on a club, working on real golf skills, the better you’ll be and the more fun you’ll have,” he explains.

“Even if you’re just practicing 12 foot putts and little chips, I think being the best 12 foot putter and short chipper at your club has meaning. It’s going to improve your scores. If golfers take an element or two that they can practice all the time and design a backyard space around that, they’ll love the game so much more.”