So we headed to the ‘other’ side but please don’t hold it against us – we’re all about gender equality here.

Besides, the majority of people who work at the Old Aeroplane Company are blokes. In fact they like to think of it as their own men’s shed as it provides a place for them to collaborate and work on things that they’re incredibly passionate about and that’s planes.

Judy Pay has built a space that most men would be envious of… and for good reason too. She’s created a haven for aeroplanes from an era that most have only lived through via television or the internet. It’s a place where warbirds come back to life and in a state that would fill their original creator’s hearts with joy.

Interestingly enough though, she wasn’t born into the aviation scene; in fact her family were instrumental in the building of Falls Creek, the alpine resort. This meant her childhood was filled with powdery snow and skis which is a far cry from the wings, fins and blue skies that surrounded her life now.

“I wasn’t always interested in planes but I grew up down the road from the Tyabb airport and I remember the area being really rural in those days. There was no mail delivery and you would have to pick your letters up when you went out to buy the milk or bread. You also had to take your rubbish down to the tip – it was basically a big farm back then.

“I use to drive past the airport everyday and I suppose curiosity began to take over. I became intrigued by the planes and thought it would be cool to fly one, one day,” Judy explains.

Then, some 35 years ago, that day when Judy found the time to make that dream a reality, arrived.

“When both of the kids started school I had a bit of free time so one day when I was driving past I said ‘bugger it, I’ll do it.’ I walked in and asked the guys if they could teach me to fly to which they obliged. I learnt to fly in a Cessna 152 and got totally hooked. It was a great little aeroplane but I don’t have one in my collection.”

Judy prefers a particular style of plane and that’s ex-military or vintage; something that we soon discovered Tyabb was famous for. 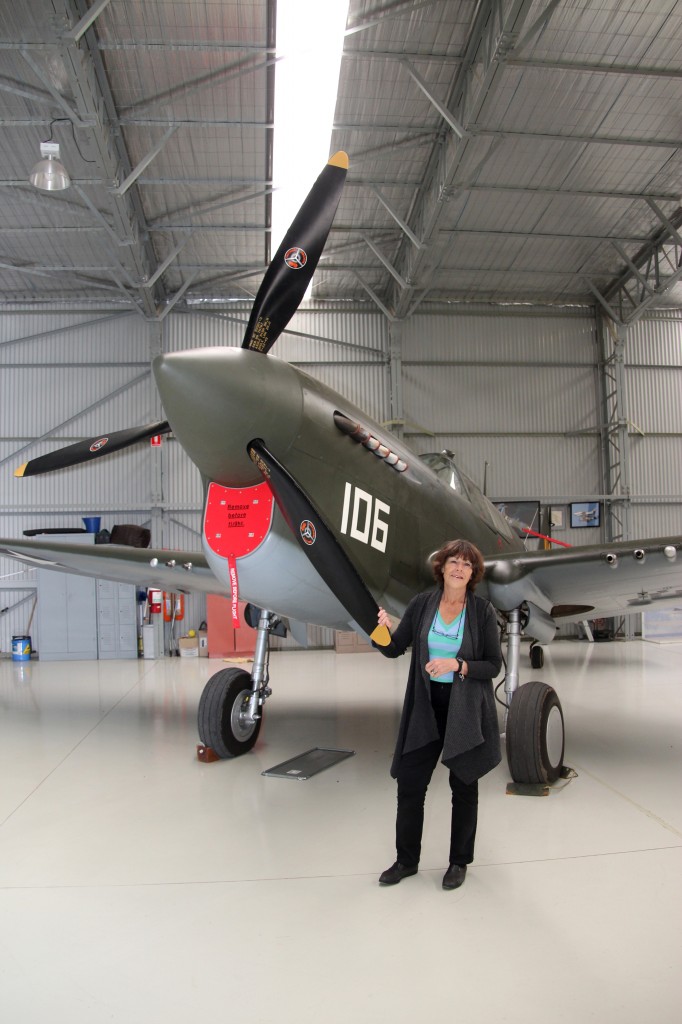 “I was driving past I said, ‘Bugger it, I’ll do it.’ I walked in and asked the guys if they could teach me to fly to which they obliged.”

“I was lucky to learn to fly at Tyabb because it was already famous for vintage and interesting aeroplanes. It’s funny because this airport is renowned around the world but not so much locally.”

So how did the curiosity turn into a lifelong obsession? Well Judy finds it hard to explain but believes that things obtain a life of their own sometimes.

“I bought a share in a beautiful Tiger Moth and eventually found myself in the position to buy it outright. I still own it today. My ex-husband and I then bought a Harvard and a T-28 and after a while I suppose it just gained momentum.

“People start to hear that you’ve got some nice aeroplanes and then they approach you and say ‘hey I’ve got this plane that would really fit in well with your collection’ and I suppose it just snowballs from there.”

Judy owned 10 acres of land next to the Tyabb airport so once the planes begun to morph into a collection, she decided to build hangar on it, which has now been joined by another out the back. Further down the track it turned into a maintenance and restoration business and in a roundabout way that is how the Old Aeroplane Company came to fruition.

“I asked an engineer from Tyabb to pull the T-28 apart with the intention of him putting it back together again further down the track. He was the only guy in Australia that knew them intimately. After starting on the plane, he wanted to cease work on it because he was low on cash flow. I had no other option so I offered to put some money in to help him out and to keep the aircraft flying. This meant that I now owned half a maintenance business,” Judy laughed. “He eventually quit so I bought him out and found a new head engineer.”

The original hangar is used primarily for maintenance and restoration work on warbirds and other vintage planes and on the day of our visit, there were a number of craft being looked after, as well as some airframes that needed a lot of work, one of which was a rare German Fiesler Storch that was used during WWII as an observation aircraft.

“It’s a big and slow aeroplane that could take off in the length of this hangar. A guy from Mildura purchased it from the States after which my friend bought it before deciding he didn’t want it, so I bought it from him – again, it just happens like that.”

Pallet racks on either side of the hangar are filled with tools and spare parts while three or four planes sit pretty in the centre, minus an engine or two of course. To top it off, the entire space is overlooked by a glorious replica of the Bell X-1 Glamorous Glennis – the plane that Capt. Charles E “Chuck” Yeager travelled faster than the speed of sound in on October 14, 1947.

“This mock up of the Bell X-1 was made by a guy in NSW for the Avalon airshow. The organisers called us to finish it off and pretty it up the night before its unveiling so I sent a team of people to see what they could do. They worked late into the night and while it’s a little bit shabby it came up nicely in the photos.

“I’ve got a number of customers’ planes in for maintenance at the moment as well as my Trojan that has found itself out of action due to something going clunk in the engine.”

For a workshop, one will notice how immaculate the floors are. There were no signs of oil leaks or built up grime and Judy has a team of volunteers to thank for it. 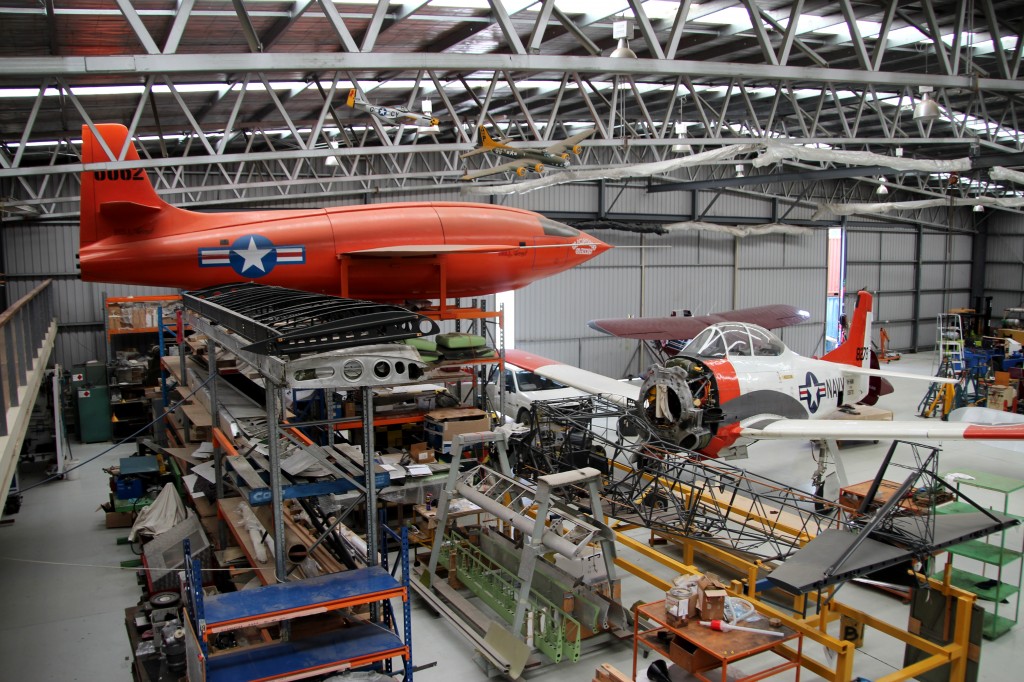 Judy Pay has built a space that most men would be envious of… and for good reason too.

“Along with the three engineers, I have a team of volunteers on board who really help to make this place what it is. I couldn’t do it without them to be honest. We get a lot of groups that come through here and the volunteers are happy to show them around and give them a tour.”

And if they’re not blown away by the maintenance hangar alone, they will be once they venture inside the second, which itself has a history, being one of the hangars from Fishermans Bend where they built aircraft during WWII.

The uncluttered floor space looks more like a showroom with roughly a dozen aeroplanes on display. Judy reveals some of the history behind a couple.

“This Kitty Hawk was lost in Vanuatu and we all knew about it but nobody bothered to get it because we thought it was uneconomical to repair. After umming and erring, I went over to the island and discovered that some other Australians got there three weeks before me and reclaimed it. I ended up buying it from them once they got it back to Australia. It was completely mangled and I received it in bits. That started a 20-year restoration but being the only genuine F-model flying in the world made it all the more worthwhile,” she smiles.

“The Vampire Jet is another interesting aircraft and amazingly enough they went from the Tiger Moth biplane to the Vampire in 10 years. It’s made of wood and boasts a jet engine that combine to outperform most of the more modern little jets around nowadays. This one in particular has only been restored to taxi, meaning it’s not flyable but we do have a flyable two-seater model at another airport in the Latrobe Valley.

“This one came from Zimbabwe where it was involved in the bush war. Some friends and I went to Africa where we toured around, flying ourselves in some hired aircraft.  During our journey we came across these Vampires. We formed a syndicate and ending up buying seven of them which, in hindsight, probably wasn’t the smartest thing to do,” Judy laughs.

The arrangement changes in here all the time depending on what is in for maintenance but for the flyable planes, Judy still gets a buzz from flying them all – it’s still her greatest passion and the way she describes the way they move through the sky is a pleasure to listen to.

“It’s no good just having them sit here in a hangar – they need to fly.”

And while she doesn’t get to fly as much as she’d like to, she’s constantly surrounded by magnificent wings and all of the things that her passion entails, which we think is pretty special.

“I don’t really have a favourite plane in my collection. It’s kind of like choosing which child is your favourite – they all exhibit individual characteristics and I love them all.”

So what lies in the future for this collection and the woman that owns it?

“There are no plans to expand my current collection – unless something irresistible comes along; I think I’m pretty content so I’ll continue doing this until the passion fades away.”

We hope it never does…