Trending
You are at:Home»Hobbies»Collections»Twaddle He Collect Next? 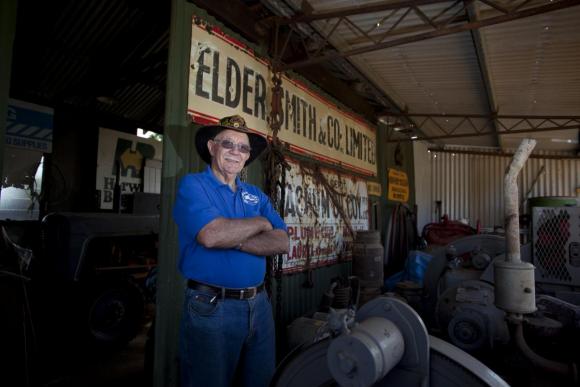 There’s not much that doesn’t tickle Neil Twaddle’s fancy. If the Western Australian collector likes something then chances are he already has one and several more just like it in his shed.

Calling Neil’s sacred space a shed doesn’t really do it justice. At almost 20 metres square it’s closer to an aircraft hangar and although he doesn’t have a plane, he pretty much has everything else you could ever want or need – or not – and more.

Neil began collecting 15 years ago. It’s a full-time hobby and it keeps him very busy. When he’s not out in his shed tending to his mass of outdated domestic appliances, “interesting bibs and bobs” and old farm machinery, he’s giving well-versed guided tours to curious visitors – up to 1000 per year – or he’s surfing the Net in search of a new and unusual addition to help round out his ever-increasing collection.

His collection is as varied as it is vast and there’s nothing Neil won’t consider, as long as it’s old. Most of his stuff is found on farms or rubbish tips but lately a growing number of items have been finding their way to him courtesy of kindly benefactors. Or from people who have historic or significant relics lying around the house and want to get rid of them, but just can’t bear the thought of them winding up in landfill. 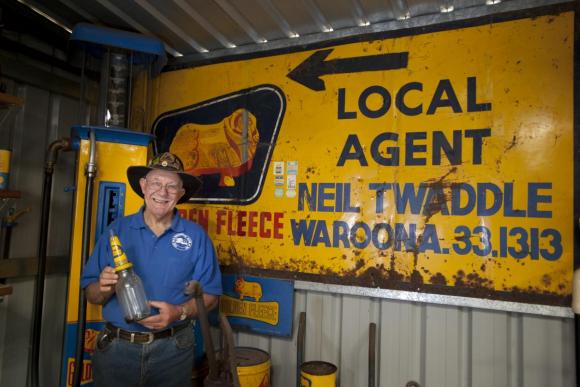 “I collect things that I like and that others like to look at, and there’s something for everyone,” Neil says. “For example, when men bring their wives to the shed – or the museum as I call it – they aren’t interested in the engines but they might like to look at the petrol irons or the hurricane lamps or the old sewing machines.”

The collection numbers a couple of thousand pieces, if you were to count them individually, and an inventory might run something like this: antique taps, butter churns, cattle brands, cow bells, diesel engines, egg beaters, Golden Fleece memorabilia, milk separators, meat safes, radios, telephones and tractor seats, which he has painted in bright, sunny colours and mounted on the wall. There’s much, much more, including a tractor; just a little one.

There is also a small and slightly disturbing display of traps – rabbit, possum, dingo, and a mantrap. “That’s a good one for the single ladies,” he chuckles.

Neil is afflicted with what he calls “rusty iron disease”. It’s an undeniable passion to collect anything and everything past its use by date. It struck him at the age of 59 and it’s joyfully and blissfully incurable. 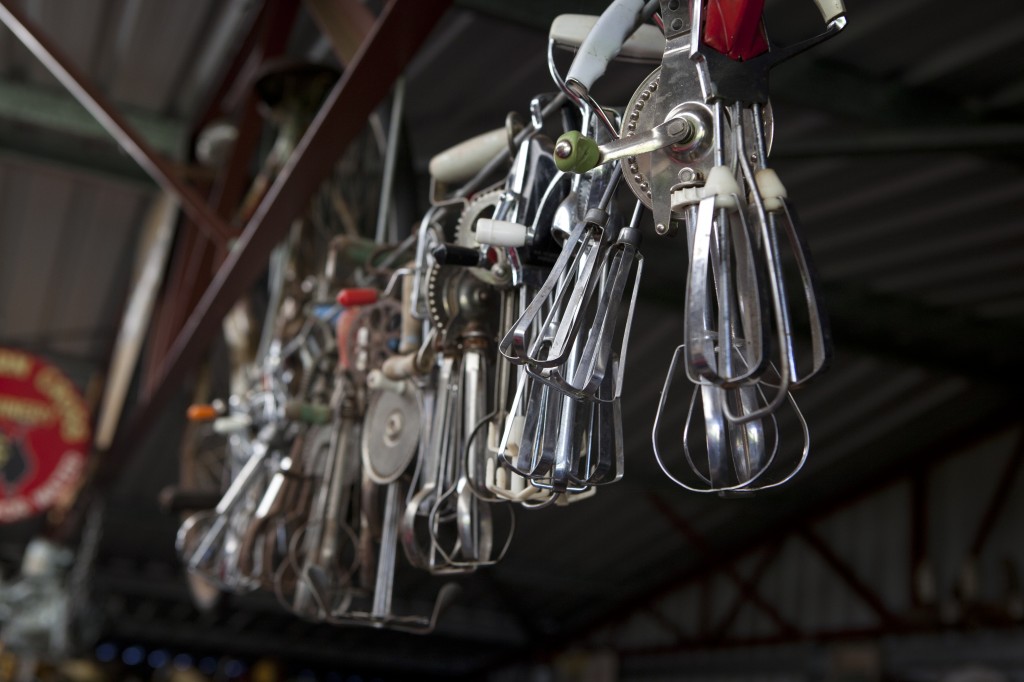 “Like any collection it starts with one of something and for me that something was a 1910 Christiansen Badger engine. Now, about 150 engines later, I’m running out of space. The shed is full to capacity but you always find room for one more piece,” he laughs.

The engines are his most prized possession and make up the bulk of his collection. He even has a separate shed to house the small handful of engines he takes to local antique and agricultural shows. There are dozens in all shapes and sizes and all in perfect working order, and there are still a couple of coveted pieces on his wish list.

“I’ve always wanted to get my hands on a 1937 Moffat-Virtue two horsepower engine and I got one in early April this year, which is great. The other one is a two- or three-horse power Crossley open crank side shaft, which is proving difficult to get and they are expensive. So if anyone out there has one, give me a yell,” he implores. 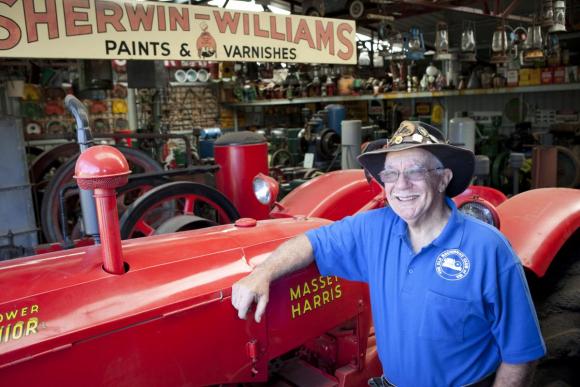 Neil says a true collector never worries about the cost of his collection because he will never see the true monetary benefit of it in his lifetime. Besides, he doesn’t collect for money he does it for love and at 74 he has no intention of stopping.

“There’s a world of stuff to collect so why stop? Once you stop you lose interest and once you lose interest what happens to your collection? It gets split up all over the place and that’s pretty sad,” he laments.

For Neil his scared shed (or museum), is about restoring and preserving history for future generations. He also believes that it saved his life. 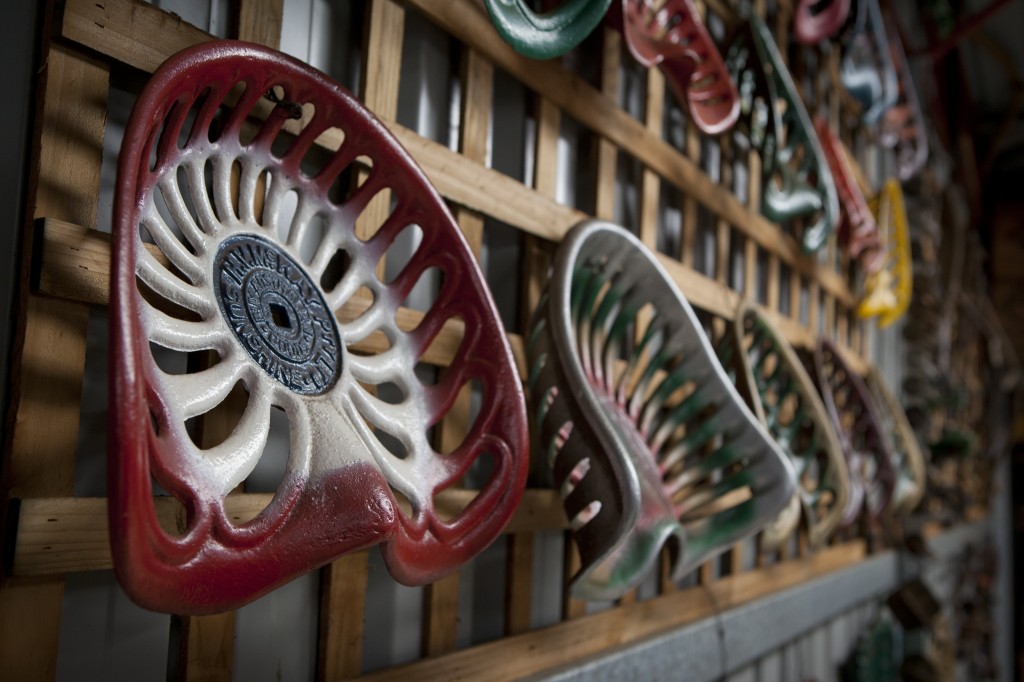 “When I got cancer I couldn’t wait to get out of hospital to get back to the museum. It’s what kept me alive, I’m sure of it,” he says. “I’ve been cancer-free for eight years, so hopefully I am fully recovered,” he adds.

“I’m in the shed all day, every day. I’m very happy here and I am very proud of the pieces I have. They are part of history, each item has a story to tell and I get as much enjoyment out of showing people the collection as I do in collecting. People come in and there first response is usually ‘Wow!’

“As they move through the museum there is a lot more ‘wow’. The wow never ends,” he smiles.

Because he is true collector not a hoarder, the shed is kept neat and tidy with a place for everything and everything in its place. Once every few weeks or if someone special is coming to visit, everything gets a good four-hour going over with the Hoover. Neil only has one and it belongs to his wife, but who knows one day he might even start collecting Hoovers as well. 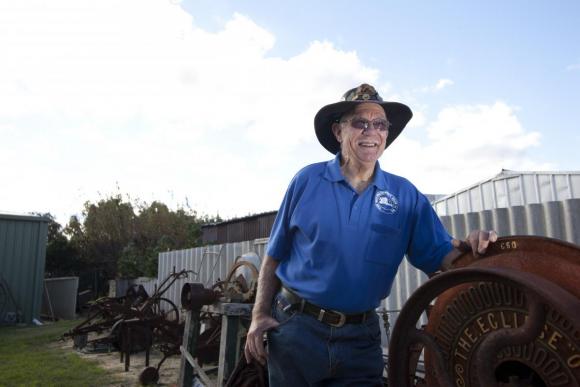