As blokes, we all know we have a prostate gland, but very few know why we have it, where it is and what it does. The prostate gland is about the size of a big walnut and it sits at the base of your bladder which is a bit like a balloon containing your urine. The prostate gland is wrapped around the base of the bladder and has the urethra or drain tube coming out of the bladder passing through the middle of it. Its job is to add a milky fluid to the ***** which makes it alkaline and assists the sperm to make their way up the ***** by neutralising the acidity there.

As can be seen from the diagram on page 61 by my cartoonist mate Harv, the prostate gland can be felt by putting a finger up the ***** and then feeling the front wall of the lower bowel or *****. This constitutes the dreaded Digital Rectal Examination or DRE. It is important to note that not all the gland can be felt by doing this and hence another test, the PSA or Prostatic Specific Antigen needs to be done as well. 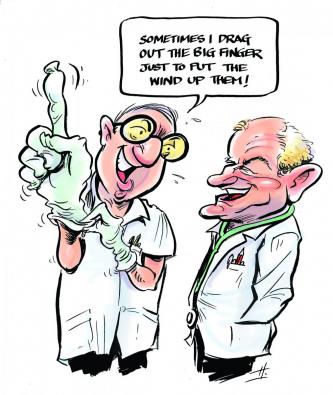 What can go wrong with the prostate gland?

Basically, there are three problems which can affect the prostate gland. The most feared and publicised condition is cancer. The most common problem, however, is swelling, largely age related, which blocks the flow of urine out of the bladder and is termed Benign Prostatic Hypertrophy or BPH. The third problem is inflammation, sometimes due to infection but commonly due to unknown causes. This can settle with appropriate antibiotics or anti-inflammatories.

Prostate cancer is the most common cancer, other than skin cancers, to affect males. There are about 16000 new cases in Australia diagnosed every year, with about 3000 deaths. It is still essentially an older man’s disease, with the average age of death being about 78 years of age. It is very rare before 40 but very common after 70. A most important point to highlight is that a positive family history increases the risk of developing prostate cancer by a factor of three to five times which means surveillance should begin earlier in this instance. I recommend from 40 years of age if there is a positive family history, and from 50 in all other males.

Are there any symptoms felt with prostate cancer?

However, with BPH, the progressive increase in size of the gland eventually starts to squash the urine drain tube or urethra coming from the bladder. Thus your bladder can’t drain as well as when you were younger. The strength of urination starts to diminish so you can’t hit the top of the urinal like you could when you were a youngster and it takes a lot longer to get started.

I will never forget going to a footy match at the MCG and standing at the crowded urinal. Beside me was an elderly bloke who had been there for a while and was leaning up against the wall on his forearm. He looked across at me and in a slurred, drunken voice said: “Me starter motors’s stuffed!!!” Yep, it gets harder to get the ***** thing started – a bit like the lawn mower! You also may need a to do a few extra trips to the loo overnight as well.

Another annoying symptom is the dribbles, with urine trickling away for a time after going, as well as a symptom called urgency – when you gotta go, you gotta go!! So most of these symptoms signify swelling of your prostate but not necessarily cancer. However, if you have any of these symptoms, then go and get it checked.

BPH is ultimately fixed up by a re-bore procedure called a Transurethral Resection of the Prostate or TURP. A drilling instrument is passed up the eye of the ***** and and the inside of the prostate gland is cored out. Fortunately there are now some good drugs which can help with the symptoms and delay the need for the TURP. Speak to your doctor!

How do doctors check for prostate cancer?

The two main weapons up our sleeves are a Digital Rectal Examination or DRE and the PSA or Prostatic Specific Antigen blood test. Let’s firstly deal with the DRE. With this, the doctor puts his index finger in the ***** and feels the front wall of the bowel. The back of the prostate gland can be felt as a soft, uniform bulge but if there is a cancer present it feels a bit harder. The other test is the prostate blood test or PSA test. PSA stands for the Prostatic Specific Antigen which is a chemical that is produced by prostate cells. It is not a direct measure of cancer but rather the size of your prostate.

The level varies with age as it normally slowly increases as you get older, just as your prostate may slowly get bigger. There is some controversy amongst doctors about its use as there is fear that it may pick up some cancers that may be best left alone – the dying with type, but not the dying of scenario. Most doctors are very much aware of its limitations but it is the best objective test we have at our disposal. If a cancer develops then the number of cells in the prostate increases and the level of PSA rises in the blood. A single PSA test is not of much use but when compared with a previous figure a PSA velocity or increase in PSA can be measured which is a useful predictor of the presence or absence of cancer in the prostate gland.

There are various figures used, but I use a figure of 0.75 per year, in which the PSA shouldn’t increase by this amount over a 12 month period. So the issue of interpreting PSA levels is to have a base-line and then repeat it every year to see if it is increasing and by how much. It is then up to your doctor to decide if this increase is too quick or not. That is for the doctor to decide. Your job is to get to the doctor in the first place to get the test done.

If your doctor is suspicious that you may have prostate cancer, he will refer you off to a water works specialist or Urologist. He’s like the plumber of doctors. He’ll want to do his own DRE and if he is suspicious then he will arrange a biopsy of the gland which is done under an anaesthetic with an instrument up through your back side. If it is positive for cancer then your treatment options will be discussed. It is important to note that a normal or negative biopsy doesn’t 100% rule out prostate cancer and regular follow up is still required.

What treatment is available for prostate cancer?

Basically it can be cut out (surgery), zapped (Radiotherapy) or drugged (hormone therapy). Surgery can be either robotically assisted or a standard radical prostatectomy and radiotherapy can be either from the outside (external beam) or from radioactive seeds embedded into the gland itself (brachytherapy). There is another option, and that is to leave it alone. Doctors call it “Watchful Waiting” and will generally ask the patient to get a PSA level done every few months. The elderly may consider this but … what defines elderly?

I certainly have had patients who have opted for this because of fear of the dreaded side effects of prostate cancer treatment – the two I’s: namely Incontinence and Impotence. As previously stated, there are cancers that probably could be left alone but at present we don’t have a test of cancer aggressiveness other than looking at it when it is cut out.

With improvements in cancer treatments such as robotic surgery, the risks of side-effects are lessened and most would now opt for some form of definitive treatment, be it surgery or radiotherapy. The drug or hormonal treatment is generally used if the cancer has spread beyond the confines of the prostate gland and aims to knock out testosterone or male hormone in the body which the cancer feeds off. Prior to the advent of these drugs, “Off with the Balls!” or castration was the only option. 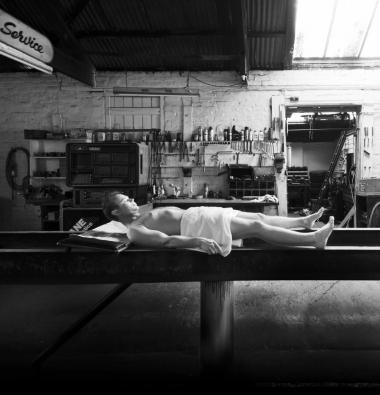 So, what is the best treatment?

This is a difficult question and can be confusing for the bloke with prostate cancer. For most other cancers, the treatment options are set in stone and your doctor will direct you to have a set regime done. With prostate cancer, you will be given options. That’s where you need to have a good chat with your specialist and your GP if need be. The best treatment is the one that you are happiest with and may I say, it is also often what your partner is happiest with. The good news is that the 10 year survival rates of treatment are now into the 85-90% range.

I can’t leave without having my two bobs worth with respect to prevention of prostate disease through lifestyle. The perennial lifesaver and my hobby horse, exercise, has been shown to reduce the risk of prostate cancer, along with the following helpful dietary factors – soy products, tomato, wine (in moderation), broccoli, legumes (soya, chick peas, lentils and beans) and selenium from meat, bread and nuts.