In my previous ManSpace column I covered the use, and largely abuse of the male hormone testosterone in improving the sporting performance of athletes and the size of muscles in body builders. The men using these substances, either testosterone itself or derivatives and peptides which indirectly increase the levels of testosterone, were not in fact deficient in the hormone. It was explained that long term use would suppress their own endogenous testosterone level via a feedback mechanism to their detriment. There are however conditions in males that lead to a definite under production of testosterone with serious consequences and replacement of the hormone is imperative for a good quality of life. 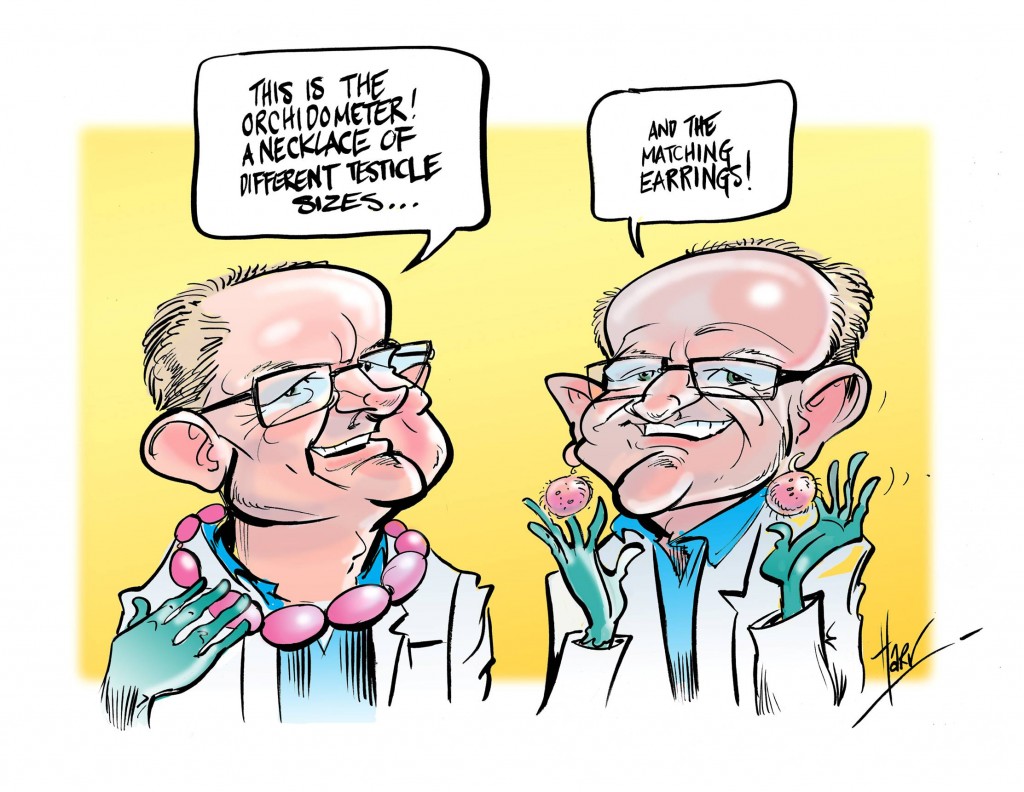 Testosterone is the main hormone that ensures men remain as men. It is in a class of hormones called Androgens and it is the main act, but along the way some of it is converted into a female hormone called Oestradiol which protects our bones, and DHT or Dihydrotestosterone which is the most powerful version of testosterone. Testosterone is mostly made in your testicles although a small amount is made in your adrenal glands that sit near your kidneys. It is under a feedback mechanism from two hormones produced in the Pituitary Gland attached to the brain, called LH (Luteinising Hormone) and FSH (Follicle Stimulating Hormone). Yes, our balls are connected to our brain which flies in the face of what women generally think. So if the testosterone level falls then the LH and FSH levels rise, stimulating the testicles to produce more testosterone and bring it back up to a normal level again.

A lowered level of testosterone or Androgen Deficiency is not that uncommon. It is estimated that it affects one in every 200 men under 60 years of age and increases further with age, possibly affecting up to 10% of men over 70 years. The levels of testosterone peak in the 20s and 30s and then diminish gradually but never to a zero level as is the case in females who go through menopause.

The causes of Androgen Deficiency can largely be lumped into genetic, testicular, pituitary (brain), or general medical problems. The main genetic cause is a condition called Klinefelter’s Syndrome which is surprisingly common and affects about one in 650 men. It is a condition in which an extra X chromosome is added to the male’s 46XY chromosome makeup; resulting in a 47XXY scoreboard. It all sounds a bit too scientific but effectively the extra X chromosome has a feminising effect and blocks the production of testosterone. Most are picked up at puberty as the testicles don’t grow and ***** develop along with a distinct lack of body hair. Quite a lot slip through and it is estimated that about 70% remain undiagnosed. In later life they may present with a low libido and infertility.

The testicles themselves may be damaged in some way by infections such as mumps, trauma, previous surgery for undescended testes and testicular cancer treatments such as radiotherapy and chemotherapy post orchidectomy (sounds like a gardening term but refers to the surgical removal of a *****). The pituitary gland under the brain may be damaged by tumours which will switch off the production of LH and FSH that normally stimulates the testicles to produce testosterone and hence a deficiency of testosterone ensues. 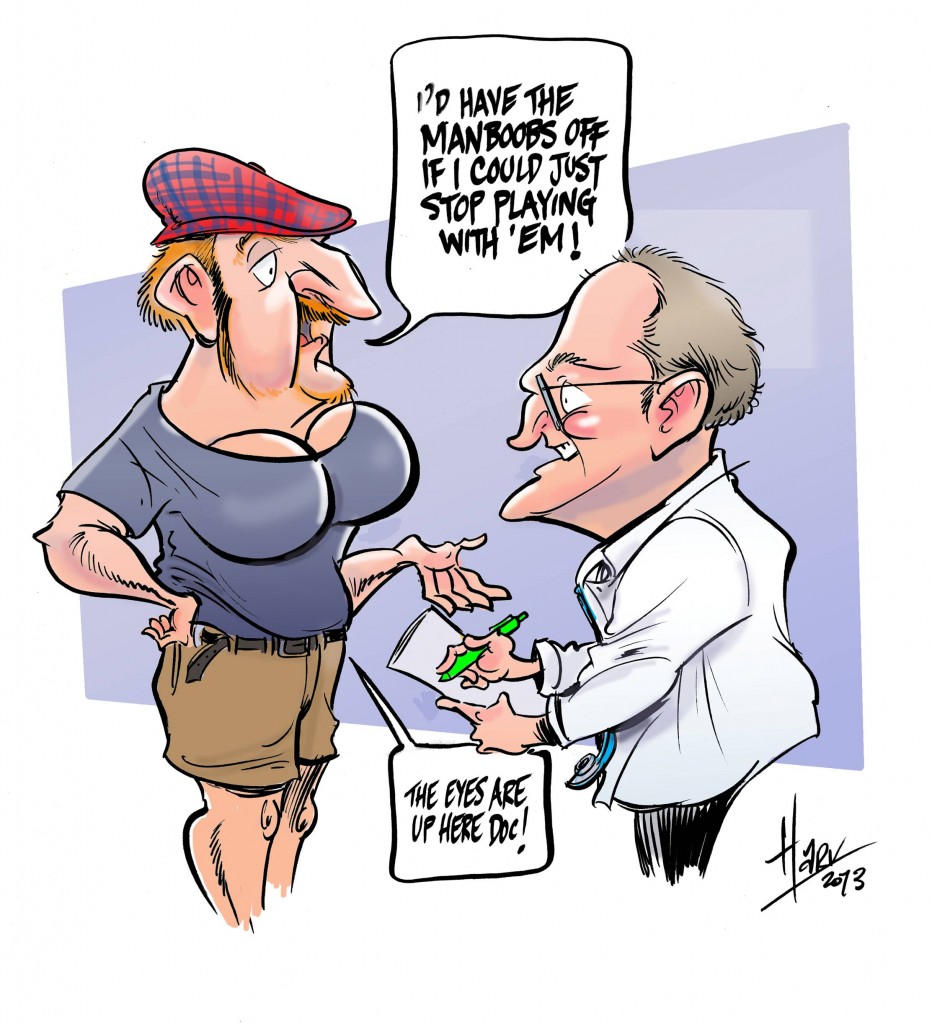 EFFECTS OF A LOW TESTOSTERONE LEVEL

This often depends at what stage in life the condition occurs. Around the time of puberty it can be quite obvious as explained with Klinefelter’s Syndrome – small balls, man *****, lack of facial and body hair and the voice not breaking. In mid-life there may be very little to see upon examination but the symptoms complained of may be very vague such as excessive tiredness, moodiness and irritability, lack of concentration, reduced muscle strength, reduced exercise capacity and recovery, reduced pleasure in previous pleasurable pursuits (hobbies, sports) and night sweats. There may be more specific symptoms such as a low libido or erectile difficulties, the lack of early morning spontaneous erections especially with a full bladder (the ***** stick) and infertility issues. In older men again, the symptoms can be very difficult to differentiate from those of t aging such as standard muscle aches and pains.

WHAT SHOULD YOUR DOCTOR DO?

It was drummed into me at medical school that there are more missed diagnoses caused by not looking rather than not knowing. Your chest should be examined for the presence or absence of man ***** or breast enlargement called gynaecomastia. It also enables an assessment of body hair distribution. The testicles should be felt to assess the size and he or she may pull out a medical instrument called an Orchidometer which is used to measure the size. It looks like a necklace with increasing sized oval-shaped balls threaded on it. It is not a bad time to get a prostate digital rectal examination done particularly in older men as the presence of prostate cancer greatly affects treatment options as discussed a bit later.

A blood test to check the level of testosterone will be pretty useful along with the level of LH and FSH. It is best to get the blood test done first thing in the morning as this is when the testosterone level is generally highest. It probably explains why a lot of blokes are randier in the morning as well! If the level is low it is important that a second blood test is undertaken to confirm the level and two readings are also required in order to prescribe testosterone under a government subsidy if needed. If the testosterone level is low and the LH and FSH is high then the problem largely resides in the testicles or if all are low then the problem is possibly coming from the pituitary/brain region and a CT scan or MRI will probably be needed. Most of the borderline low levels I see are generally in overweight and obese blokes.

Other tests that may be done are:

If a low level of testosterone is confirmed then the GP will have to decide what to do about it. Many GP’s will refer the male to an Endocrinologist who is a hormonal specialist. This is a good move as it can be quite a complicated condition. I certainly feel that all young males or those with a pituitary cause need to be under specialist care as there are often further tests and other specialists that may need to be involved and the therapy is quite complicated. The middle aged patients can often be managed by their own GP as in most instances they will not require testosterone therapy as simple weight loss will increase their testosterone levels.

This sounds simple but it can be difficult for some who will need ongoing encouragement to make dietary and exercise changes in their lives. I have seen wonderful results however, with the powerful tool of weight loss. The older patients can be difficult again as a lot are frail and certainly not overweight but because of their age they are at risk of the main side effects of testosterone replacement therapy. Another old medical adage keeps cropping up – at first, do no harm! Yes, we want to make the person feel better but we don’t want to bump him off with heart disease or prostate cancer, although I have had it said to me by quite a few older blokes that they would prefer a better quality of life with therapy and are happy to take their chances.

THE MAIN SIDE-EFFECTS OF TREATMENT

Prostate disease, including Benign Prostatic Hypertrophy with blockage of the prostate and prostate cancer may be hastened. Sleep apnoea may start up or it may get worse. The blood may thicken and clot which may travel to the lungs and fluid may accumulate and lead to high blood pressure and heart failure. As you can see, the decision to start treatment with hormone replacement therapy shouldn’t be taken lightly. It can be trialled for 3 to 6 months to see how the patient feels and can be stopped at any stage when problems arise. It will require regular, general check-ups which is not a bad thing.

The most common form of treatment that I see is the injections or the transdermal or skin treatments. Tablets are available but they have to be taken two to three times daily and the absorption of them is variable. It is hard enough to get a bloke to take a tablet once a day, let alone three times per day.

Injections of long acting testosterone are available which can be given every 2-3 weeks or even up to every 12 weeks. There is even a testosterone implant which is like a seed that is inserted under the skin and lasts up to six months in some instances. Most blokes don’t mind the needles although I have a few scaredy-cats.

The transdermal option of treatment is popular. There are three different mechanisms. Firstly there is a patch which sticks to the skin and slowly releases the testosterone through the skin. The patch is generally applied at night time and replaced each night. Some blokes get skin rashes and have to stop using the patch. There is also a gel that comes in a sachet that is squeezed onto the skin and then rubbed in, once again on a nightly basis. The most recent addition to testosterone therapy which is also via the transdermal route is an underarm solution that is rubbed into the skin of the armpit like an underarm deodorant. This is an Australian invention from Monash University and I wonder what they will think of next: Testosterone impregnated stubby holders – I might patent that one.

Well there you have it. Male hormone problems in a nutshell. Excuse the pun! And you thought that only women had hormonal problems. Yes, we blokes are pretty dependent on our balls for our manliness. Keep counting them, guard them but more importantly if any of what I have mentioned here starts happening to you or has happened to you then don’t be afraid to front up to your Doc and raise your concerns. There will be some doctors up with the latest and others perhaps not too interested in blokes’ health issues. That’s ok. Just go and get a second opinion. We do it in all aspects of our life so why not when it comes to the important issue of your health.

As always, stay happy and healthy. And might I say – Go Hawks!!