As one of the biggest issues in men’s health, we will always be very happy to devote pages in ManSpace Magazine to the awareness and support of prostate cancer.

The extraordinary efforts of people like Bernie and the good folk at Movember – as well as a number of specialist prostate centres and research clinics around the country – should not be underestimated. The knowledge generated and the funds raised because of their work has encouraged men to get checked and this has lead to better systems to beat this horrible disease.

However, while the statistics pleasingly indicate improvements in detection rates and successful treatments, the work will be on-going; particularly for the support of men after treatment.

As with many medical conditions, successful treatment for prostate cancer is only part of the recovery, with many patients suffering serious side-effects that can be incredibly difficult to live with.

Recognising this need, a group of dedicated professionals, in conjunction with the Australian Prostate Cancer Research Centre Epworth (APCRCE) have put together My Road Ahead, an incredibly impressive online program that offers information and support for men who have undergone treatment for prostate cancer. 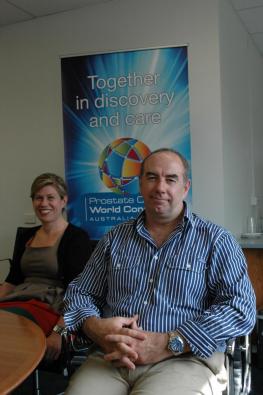 Taking the form of a coloured road, participants work through a group of modules to help them deal with ongoing issues in a step-by-step process. All data is recorded in a personal file and can be presented back to the participant to see how they are doing. But most of all, it provides support and information to a group of people who traditionally have trouble asking for help – men.

Dr Addie Wootten is a director of psycho-oncology research at APCRCE and provided an enormous amount of skill and effort in establishing the right content for My Road Ahead. She says that there is a high need for such a resource given the amount of men who suffer from prostate cancer, combined with the common side-effects from treatment and the difficulties many men face in asking for help.

“About 20,000 men are diagnosed with prostate cancer each year, so it is a very significant number,” says Addie.

“To this stage, all the focus has been on medical outcomes such as refining surgical techniques and radiotherapy techniques. Although there have been significant developments, all the medical procedures still have quite significant consequences in terms of quality of life – even with a completely successful treatment.

“The most common side-effects are incontinence and erectile dysfunction for at least a number of months after surgery and sometimes longer – and that applies to both surgery and radiotherapy.

“So even though a patient may have undergone successful surgery for the cancer, there are still significant issues to be worked through and for a considerable length of time.”

While these issues are clearly distressing in their own right, the subsequent impact can be even greater. Loss of libido, loss of intimacy and the ensuing impact on relationships can often follow and should never be underestimated. Equally, recovering patients will often experience fluctuations in mood; leading to higher rates of depression, anxiety and, quite alarmingly, suicide. 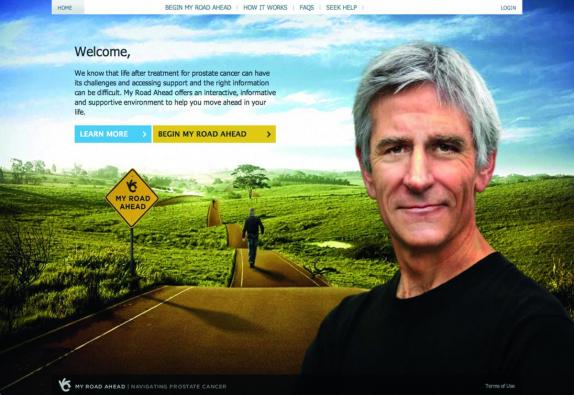 The statistics will say that most men do well, but there is a period of adjustment that will generally run for about two years, so there is a considerable amount of time to work through after they have been sent home from the hospital.

“I guess that’s where my role comes in,” explains Addie. “We see these men coming through the process with awful side-effects, but they’re basically left to deal with it themselves. There are not many support services in the hospitals to help men with issues like this; there are psychologists and therapists available, but there is no routine care so many slip through.”

As such, it is essentially left to the individual to seek out their own support and – let’s be honest – men aren’t great at actively asking for help.

“Recognising this gap, we were always keen to develop a structured process to help men through this difficult stage,” explains Addie. “It was at this time that I was introduced to James and the opportunity presented itself to make something quite exceptional.”

James Wilson is a highly-credentialed marketing professional with experience across a wide range of industries. He is also a prostate cancer survivor, at the frighteningly young age of only 42. As such, he brought a unique combination of skill and personal experience which has clearly come through in the finished product.

“Thankfully, I came out of it equal to how I went in – and I’m so grateful that I wanted to give something back,” says James. “I come from a background in corporate marketing and strategy so I can recognise an unfulfilled need.

“My experience with prostate cancer was quite distressing and I know that heightened my resolve to want to be part of helping others.”

James’ journey through prostate cancer is a timely reminder for any male and highlights that well-worn adage of regular visits to the doctor to know what you’re up against.

“I was due to have just a normal check-up at the GP when I saw an interview on 60 Minutes literally the night before. In the piece, they spoke with Dr Tony Costello regarding the robotic procedure he had used when treating (AFL identity) Sam Newman for prostate cancer and it really struck a chord with me.

“Armed with new information in my head, I went to the check-up and asked for a PSA (Prostate Specific Antigen) test, but was told it was not necessary.”

Although there is debate about the merits of the PSA test among some doctors (and it is considered quite rare to conduct one for anyone under the age of 50), James was still surprised at the resistance he received from his doctor when he requested it.

“I was told that it wasn’t necessary, and it basically took me threatening to go to another doctor for my GP to agree to do it.”

James’ PSA results revealed a reading of 24; a very high level that would indicate considerable problems. Even then, his doctor believed the high reading could be attributed to something else and placed James on antibiotics. After three months of medication, James returned to the doctor to find his PSA reading had increased to 28. Consequently, he was referred to a urologist.

“After the simple digital exam, I was sent into hospital for a biopsy, but the results came back negative. I with sitting there with my wife beside me and she was so relieved, yet it just didn’t sit right with me. I was told that we would wait 12 months and review again, but I wasn’t comfortable with that, so pushed to get further testing.”

In the second biopsy, samples were taken from multiple parts of the prostate with one of the seven needle points returning a positive result.

“I was told I would need surgery and remembering the 60 Minutes piece on Sam Newman I asked about the robotic surgery procedure done by Dr Costello – but was told there was no difference.

“At this stage I wasn’t particularly happy with how things had unfolded, so I went back to my GP and asked for a second opinion – most particularly I wanted to see Dr Costello. I was told it wouldn’t be possible, but pushed yet again, and amazingly there was a cancelation and I was able to get in to see him.”

The robotic surgery procedure is preferred by some specialists as they say they are able to get a magnified view that allows them to perform precise incisions without damaging nerve endings.

The surgery was obviously a success for James, and through the process he developed a great rapport and respect for the team who treated him.

“When you’re in a state of high anxiety, what you want is sense of calm and reassurance and someone who can give you clear and simple information, and that’s exactly what I received from Dr Costello.”

The next stage for James was to deal with the post surgery side-effects and mental doubts.

“Even after surgery there is still no immediate guarantee that you’re free from cancer. And just as you’re dealing with that, you get told that you could have lasting problems with continence and your sex life. That’s pretty devastating for any guy, but particularly one in their 40s,” he says.

“Guys are bad enough talking about their problems as it is, but when you consider the side-effects from this sort of surgery, it just makes it even worse. You feel like you’re losing part of your manhood when you’re having trouble in your sex life, or because you’ve got to wear a pad to the football – or whatever it might be. And then guys tend to close up when what they really need is to be able to talk about it and share their concerns with others.”

At this stage, James knew how he could give back to the people who saved his life.

“So much of the world is utilising the internet every day that it appeared to be the obvious medium to work with. Consequently, we set about making this ‘e-therapy program’ where men could access this information from the comfort and security of their own home,” he says.

It was important however to create the right impression and content, and it was here that James’ personal experiences and Addie’s professional knowledge combined so well. 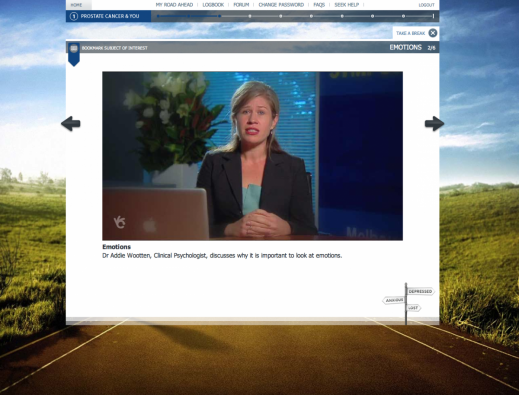 “When I was working through my own issues I did a lot of searching online,” says James. “And I found that there are literally hundreds of sites claiming to be about prostate cancer. Some of those are extremely technical so the average person struggles to get useful information from them, while a huge number are actually blogs that basically proclaim gloom and doom and do nothing but scare the person reading them.

“So, we wanted My Road Ahead to be more than just gaining information before or after treatment. We wanted it to be a journey that requires an ongoing partnership of support and information. That way you know that you are getting the right information and the right answers to your specific question.

“We wanted this to be real men talking about real issues and putting the agenda right up front.”

At this stage, My Road Ahead is in a trial period; however every indication is that it will be a readily available online resource shortly. Most impressively, there is really nothing like it in the world – and it was created here in Australia.

Ultimately it fills an important gap. After any form of trauma or surgery we are only as strong as the people around us. For those who do not have that support network around them – or find trouble reaching out for help – then resources such as this become even more valuable than you can imagine.