Trending
You are at:Home»Hobbies»I Am Ironman

Barry Armstead appeared in the very first ManSpace magazine, as we took a look inside the observatory he’d built in his own front yard to gaze at the stars. But the keen tinkerer has been busy in the shed since, turning himself into Canberra’s own Tony Stark. Zach Broadhurst explains.

Barry Armstead is a creative mind who always has to have a project on the go, so when he rebuilt his front yard observatory he decided to turn his attentions to the iconic red and gold Ironman suit.

“I’m a bit of a tinkerer in the shed; I love wood work, metal work and learning how to work new materials and textiles,” says Barry.

“I saw the suit online and thought it would be cool to make. Ironman sort of envelops all kinds of mediums to build the suit, but then you have other things like lighting, electronic, animatronics and all that sort of stuff – there are a lot of things to learn along the way.”

As creative as Barry is, a suit like this can’t be built alone, with sophisticated plans and programs needed to make the suit come to life.

“Information-wise there are guys on the internet who are very good at doing the 3D designs,” explains Barry.

“They use pepakura – which is Japanese paper craft – and take a 3D model, scan it, break it down in a program and unfold it. Then it’s all flattened out and adjusted. Tabs are put on it for gluing it together, it goes into a program where you enter in your measurements and scale it to your size. You then print it out on A4 card stock and you just start cutting, folding, gluing and the hardening process starts with fibreglass resin, car body filler and fibreglass mat.” 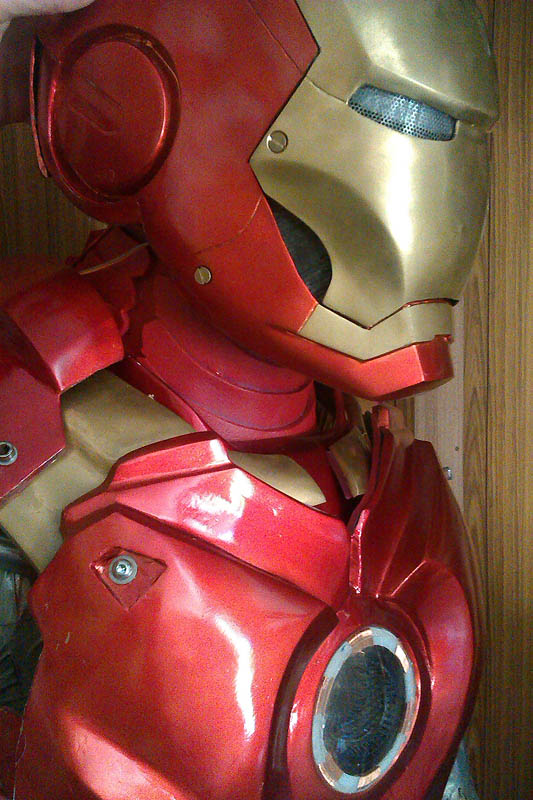 Barry has built a few of these suits, using cardboard and fibreglass in the past, before moving on to his current steel suit – with the build time differing from one material to the next.

“It all really depends on how fussy you want to be,” says Barry.

“I’ve seen guys do speed builds in a month using foam. I took just over a year to build the fibreglass suit and I never got it finished, I just had the top half done and one leg. With this steel one it’s taking a lot longer, because I’m being a lot more careful and working with steel is a lot harder.”

While progress on his steel suit is coming along nicely there is still more work to be done, with modifications needed and a system of holding the suit together on his body required.

“I’ve got one thigh and two arms to build and then the suit will be complete parts-wise. Then it’s a matter of taking each part one at a time and modifying it to fit properly, to pad it, put in joints and a fastening system to get the thing on and off,” says Barry. 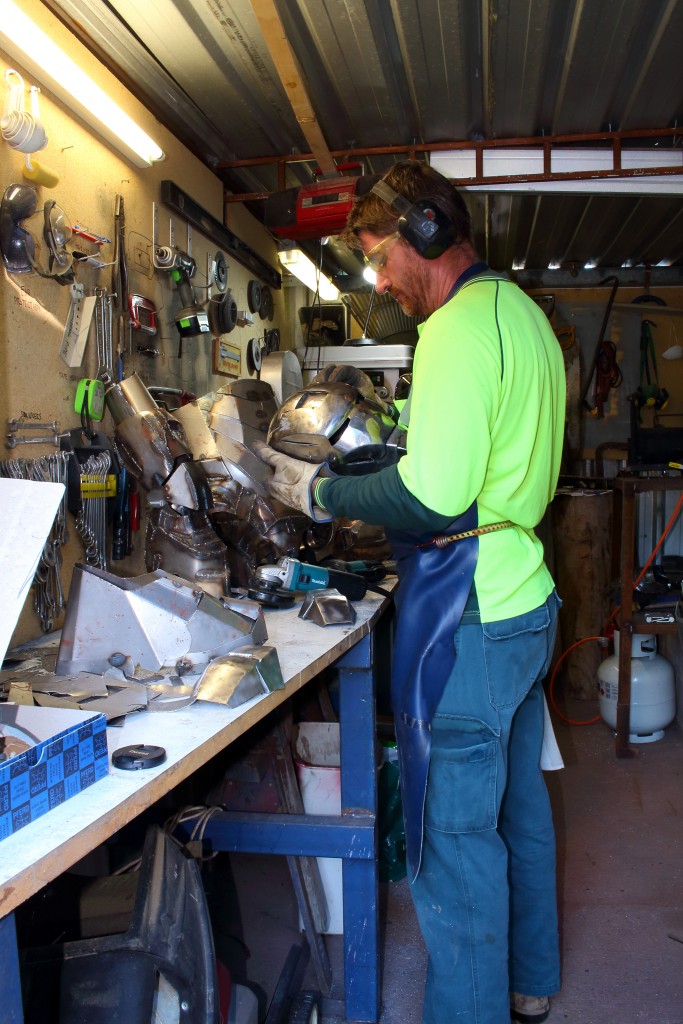 There are a number of ways a fastening system can be used within the suit, but no matter which way you go, getting these suits on is definitely a two man job.

“Some people use Velcro systems, some use powerful earth magnets, others use nylon straps and plastic buckles. I’m probably going to use a hybrid, but a lot of it will be bolted using a cordless impact driver,” explains Barry.

“You need another person to help you and if that person knows what they are doing, it will take 20 minutes to get it on.”

There are many difficult elements associated with building a suit like this, especially when needing to make it mobile, but it is often the smallest pieces that can cause the biggest headaches.

“The gloves are the most difficult, because the hands have to be such a perfect fit,” says Barry.

“I guess with the whole suit the most difficult part is making it mobile, because being a rigid suit you’ve got to expect some loss of movement. But in saying that, you’ve got to be able to go to a party and have a drink and scratch your nose. I couldn’t do that in the fibreglass suit, I couldn’t even reach my face, so this one is about tailoring it much closer to the body and being able to move.” 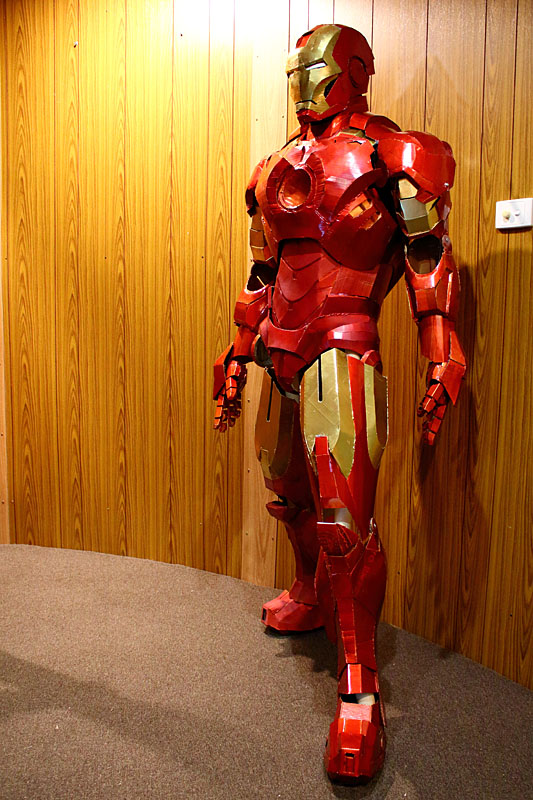 Being mobile in the suit is very important, as Barry plans to wear it inside hospitals and spread some joy to children who are terminally ill.

“I’m interested in getting into the hospitals, because there are kids in there that are stuck in there for life. There are terminally ill, they don’t get to get out, so the only way for them to have fun is if you take the fun to them. Hopefully I won’t scare the hell out of too many of them,” Barry laughs.

While there is still some work to be done on the suit before it’s completely finished, it’s now at the relieving stage for Barry, as all the pieces are starting to fall together.

“It can get very frustrating while you’re building it, because there are so many parts and it’s such a long process and it takes a lot out of you,” Barry explains.

“When you grab all the pieces out of the box, lay them all out and position them into their spots you really start to see the light at the end of the tunnel. I can lay it out and see it almost as a complete suit now and it looks great and that encourages me to keep going.”

With this project coming to a close Barry has already started to think of what will come next; always needing something to keep him busy. And while there may be more suits built in the future, he has some family projects that need attending to.

“There are other suits I’d like to have a go at just for fun, like the suit from the game Crysis. That is a more organic suit, so it will be interesting trying to find the right materials to build that with,” he says.

“I’ve got to build a deck on the house next, but I suppose it will be one project for me and one for the family.”