You don’t have to be a rev-head to enjoy the thrill of a little acceleration. As much as we often tell ourselves that it ‘doesn’t really matter’, everyone at some point has experienced the sheer thrill of being pushed back into the seat from the brute force of a hot motor. It leaves a tingle in your legs and a smile you can’t easily remove from your face.

Mark Davison must walk around with a permanent smile on his face. His car can accelerate from zero to 385km/hr in six seconds. It takes 3,000 horse power to achieve that – to give you some perspective, a showroom Porsche 911 Turbo S has around 530 horse power.

Clearly, Mark’s car is not for driving to the shops – it is in fact a specialised drag car – but unlike a showroom Porsche 911, he built it and maintains it himself.

To call it a labour of love might be one the biggest understatements put into this magazine. For over 30 years, Mark has put his energy, his spare time and nearly every spare dollar into running race cars. He has run a family business around his cars – taken holidays around his cars – moved interstate for his cars – made more personal sacrifices than he can remember – and wouldn’t change a thing.

“You have to love something like this to run it yourself,” says Mark. “I know I’ve given up a lot to do it, but I also consider myself very lucky. Personally I’ve had a lot of great experiences, but it is also something I’ve been able to share with my family. My wife, my daughter and my son are all involved in some way. We travel together around the circuits when I’m racing, which can be weeks interstate on the road, but we have a ball.” 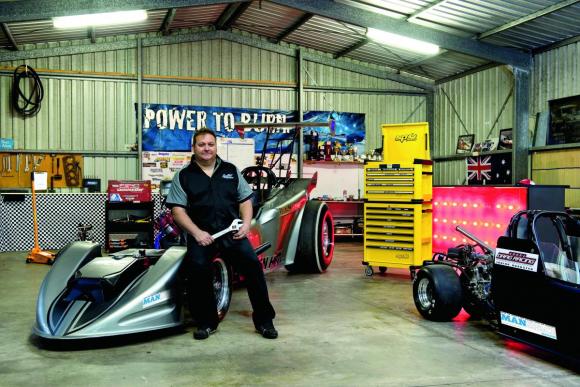 There is a common expression about fuel running through the veins from a young age and Mark is no exception. Cars and tools were present from the day he was born, and he can’t remember a time that he didn’t dream of running his own vehicle.

“My uncle used to race when I was about eight years old – so the fumes were in my system from a young age. He used to run a Fiat Topolino in some localised events, and I would go round to his place in Adelaide on a Saturday afternoon and watch him work on it. It all seemed to run from there I guess.

“Basically, I couldn’t wait to get into one myself. From the time I got my first job at 16 years of age I had a street car project on the go – and by the next year I was racing.”

Most teenagers overestimate their automotive abilities and inevitably encounter problems, but Mark continued to race that car for a number of years, even taking it across the border to run at Calder Park and other Victorian race tracks.

By the 1990s, he had moved into a category called ‘Wild Bunch’ which travelled through various race tracks in South Australia and the eastern seaboard; however an incident shifted his focus from the track to drag events.

“I had a bit of an accident in 1996 at a place called Kingston in South Australia, rolling the car eight times, so I had an enforced break for about 12 months. The car was a wreck and – to be honest – so was I.

“When I recovered, I decided to change direction a little and build what they call a ‘Funny Car’; which is a full-on race car used for drag events.”

A further complication disrupted the plans when the Adelaide National Raceway was closed down – meaning there was nowhere to compete locally.

“I had so much money invested in cars that I had to make the decision: either sell everything and do something different or move to another state. So, I moved the business and the family to Queensland!”

Some may consider that obsessive, but Mark says it was a fairly simple decision.

“It probably seems like a big move, but I’m not sure we considered any other option. The whole family is involved with the cars so we all would have missed it had we not moved, and the business is fairly transportable, so we just saw it as something that had to be done.” 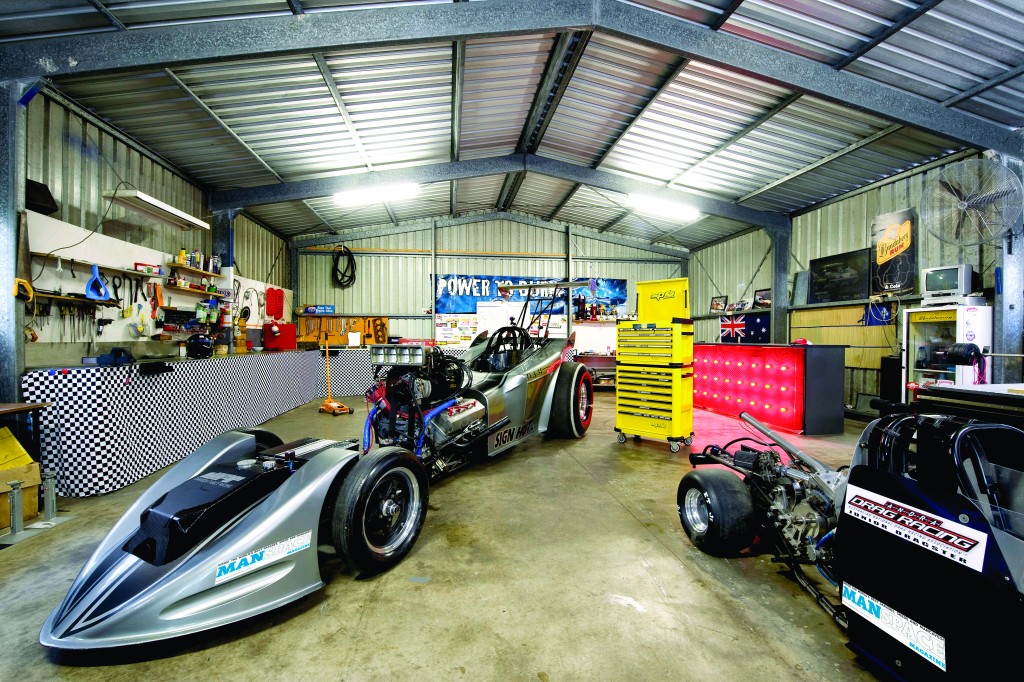 The family business is a thriving sign-writing operation, offering customised printing on nearly any surface or material.

“If it wasn’t for the business there wouldn’t be a vehicle,” says Mark. “We work hard but we’re proud of what we do and the success of it goes a long way to bankrolling the venture.”

Running a car like this without the backing of a major corporate partner is a massive achievement. So what do you have to do to keep getting the money together?

“You get to enjoy the taste of baked beans,” laughs Mark. “Honestly, there are some pretty big sacrifices – not just by me, but from the whole family. Basically every dollar you earn goes into it.”

The other advantage of the sign-writing business is that it can be run out of the same space as the car.

“We’ve got a couple of acres just outside of Brisbane, so we’ve got the space for a 100 foot by 40 foot shed at home where we run both the business and the car.

“You do something like this for the racing, but a huge part of it for me is the time and effort spent working on it. There’s something really therapeutic about finishing a day’s work and then working on the car – even if it is in the same building.

“Don’t get me wrong, I’m not casually tinkering with the motor

car I forget all about work and clear my head.

“Sometimes I’ll be out there on my own, and that’s fine, but other times my son will come out and we’ll put the radio on, work on the car together and maybe have a beer at the end of it. I feel pretty lucky to have that.”

You would need to enjoy all parts, as it is a serious commitment. In the lead up to an event, Marks says he could easily put in 30 to 40 hours preparation, and that work obviously has to be done out of office hours.

The current car is a heavily modified T-Bucket, or in a drag-racing terms – an ‘altered’. It has a full chassis cage and the driver sits directly over the differential with the engine out in front. It runs on methanol (alcohol) and can cover the first 20 metres from a standing start in half a second.

“It originally came from America, but was quite different back then. I purchase it, stripped it back to the bare chassis and rebuilt it to what it is now.”

Mark has picked up a number of impressive wins along the journey, but is yet to claim the ultimate title of Australian Champion.

“What we race for is called the ‘Gold Christmas Tree’, which is a trophy shaped after the electronic starting lights at a drag event. You have to travel around the circuits and pick up enough points to make the grand final – with the overall winner named the champion. I haven’t quite got there, but there’s time for me yet!”

For someone like Mark, who is operating his car on a very limited budget and with the support of his family, part of the lure of drag racing is that it is a ‘one-shot’ sport where anyone can win on the day if they are good enough.

“Drag racing is different to a lot of sports in that you’ve really only got one chance when you go out there. Even other forms of motor sport – such as circuit racing – you might make a mistake early on, but you have five laps after that to fix it up; if you make a mistake in this, you’ve lost. Basically, it comes down to six seconds – and in those six seconds you’ve either won or lost. That’s the appeal and the challenge.”

While he hasn’t given up hopes of a national title, Mark does concede he may not have too long left in the pilot’s seat.

“I still love the driving and know I’m capable, but it does get tiring. We’re doing all of the work ourselves, so it’s a lot of hours tightening up and tuning the car – through a race meet we could be at the track either racing or working on the car from eight in the morning through to one at night for the full four days. When you then jump in the car to compete you feel completely exhausted.”

Furthermore, the next step in the process is already underway – a Pontiac body ‘Funny Car’ for his son Shane.

“He’s almost 19; he’s done an electrical apprenticeship and got himself a future so we think he’s about ready to get behind the wheel and start driving himself,” laughs Mark.

“I think I’d be really happy to just work on the car with him and then occasionally jump in behind the wheel myself to blow some steam.

“Drag racing is great, because age is not really a factor – you can just step down to a different bracket if you want.

“There are guys in America still competing in their 70s.”

Still drag racing in your eighth decade … now that is most definitely a passion.

“I’m not sure it’s a passion,” says Mark, “perhaps it’d be closer to call it an addiction!”

As has been mentioned in the article, it is a massive effort physically and financially to run a car in this form of competition, with Mark and his wife Linette competing with limited sponsorship. If anyone is interested in supporting his team, you can contact Mark directly at mark@signhut.com.au