Trending
You are at:Home»Hobbies»Chief of the Indians

The famous teacher, philosopher and political theorist Confucius once said: Choose a job you love and you will never have to work a day in your life.

It’s a simple, universal piece of advice. Trouble is, not everyone knows how to go about achieving it.

Enter Jim Parker, local businessman and self-confessed Indian motorbike fanatic. For the past 20 years, Jim has dedicated most of his days running what is described as the last Indian shop west of Los Angeles. He admits that there is never a day when he doesn’t want to come to work – although this does come with a little bit of compromise.

“I set out with three objectives when I went into business working on Indian motorcycles: to not owe money, to not be owed money and to not employ anyone. And I’m a complete failure, because you just can’t operate like that,” he laughs.

“People often make the comment that I’m lucky. While it may seem lucky, at the end of the day you’re still running a business with debtors, creditors and things that go wrong.” 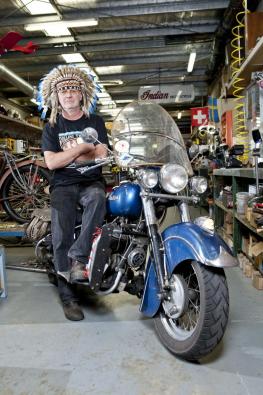 Jim was bitten by the Indian bug when he was an adolescent. A passion for old motorcycles soon turned his attention to the brand and, after buying his first Indian Chief in the mid-1980s, the fervour grew from there.

First he started tinkering around with the inner workings of the bike. Then he gradually got to know more people who shared the same interest. That eventually led to fixing other people’s bikes as a good old-fashioned favour and before long, the word had passed around.

The net result from all of the tinkering and networking is Jim Parker Indian Motorcycles – a small business begun by complete accident; with no business plan in sight.

“The more that I had to do with Indian motorcycles, the more I fell in love with what they did,” he says.

“I think part of the added mystique of the Indian is that the brand is gone – it’s finished. Had the Harley Davidson gone broke and Indians survived, maybe I would have Harleys. But I find the Indian to be a little bit more exclusive.

“Judging from the first Indian motorbike that I bought, I really liked riding the motorcycle. And if it wasn’t a particularly enjoyable bike to ride then I wouldn’t be restoring them now. I’d give the rest of it up, but not that.”

There’s no doubt the motorcycle brand deserves the praise of words like ‘mystique’ or even ‘legendary’. From its dominance on racetracks around the world (does the name Burt Munro of The World’s Fastest Indian fame ring a bell?), to its engineering prowess and visionary thinking, Indians have a storied history like no other.

Ten years after its conception in 1901, Indian riders held every American speed and distance record. The production plant in Springfield, Massachusetts continued to grow with motorcycles manufactured for both World War efforts. In 1923, the company was renamed Indian Motocycle Company (a bold move to drop the ‘r’ in motorcycle, much to the annoyance of this journalist). It was a decade of growth for the Indian model line, starting with the revolutionary 1920 Scout and followed by the Chief, the even more powerful Big Chief, the lightweight Prince and the four-cylinder Four.

The signs of an impending downward spiral began when the company was sold in 1945. Following World War II, Indian struggled with re-entry into the public market and sales continued to decline until it was forced to halt production in 1953. A number of successor organisations have since perpetuated the name and last year, Polaris Industries added the brand to its stable of Victory cruiser and touring bikes, meaning that Indian will now operate as an autonomous business unit. 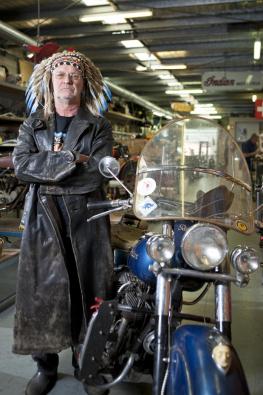 “Indians mean more than money to a lot of people. It has become a bit of a cult because we get so passionate about them,” Jim explains. “People don’t tend to have one Indian. It starts with one and it develops and becomes an obsession.”

With a cheeky grin, he goes on to explain a saying in the ‘cult’ motorbike world: Indian ownership is not an illness; it’s a disease of which there is no cure. However there is treatment and that treatment is cash.

“When I restored my first bike an old man said to me that I needed a big workbench and a big barrel of cash. When the barrel was empty, the motorbike wouldn’t be finished until I got another barrel. And it’s very true.”

These days, Jim Parker Indian Motorcycles has had its foot to the floor (excuse the pun) restoring bikes for customers throughout Australia and all over the world. Tucked away among a string of shops in a corner of Melbourne’s south-eastern suburbs, it is very much a business that can only be found if you know where to look.

Take one step inside the workshop and you’re faced with the typical aura of a mechanic’s garage: the smell of engine oil lingers in the air and shelves are packed with labelled plastic tubs that house an array of parts and gadgets. I guess most people would call it ‘organised chaos’ – but this workshop does come with its fair share of personality.

Dotted here and there between the bits of machinery are subtle signs of Jim’s passion for these bikes, all of which combine to make the workshop his own. Memorabilia and personal items adorn the walls and hang from the ceiling. An old Indian Motocycle sign lights up the passageway; a black and white photo of a stern-faced chief stares down at visitors and a poster advertises a motorcycle race long passed.

“Typically there are 15-20 Indians in my workshop. We specialise in engine and mechanical restoration, so we do everything from fine-tuning to a complete restoration. There is no restriction in what we do,” Jim says.

“We tend to use reproduction parts which we often have to make. Over the counter and mail order supply of a large range of parts from US and Australian manufacturers is also available for most models.

“People will often bring one part in and then another and we end up doing the whole job because they realise that while they may have the ability to do some of the work, they just don’t have the time. A full restoration will often take a year or more because you tend to get held up by components. We’re working on a period of production of 50 years on a fairly sensitive model range and it’s not possible to have every component in stock.” 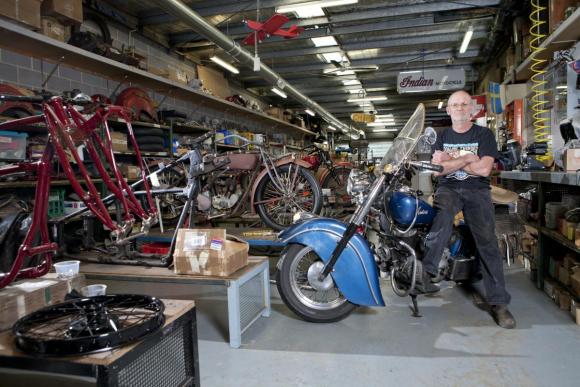 Wooden tables along the length of the shop are decorated with motorbikes that are all in different stages of restoration. Some have a long way to go with just a lone frame standing on the bench, while others are ready to be picked up by the owner-enthusiast. There is an assortment of bikes with shiny exteriors (fresh from a trip to the painters), yet a select few have retained the original paint work. Beside the workshop is double-storey shed, again housing rows of different models, all lovingly covered with a spare piece of sheet to protect them from the elements.

You can appreciate the worldwide admiration of these bikes when you take note of the immaculate detail that goes into the design. A model that was commonly used in World War II is decked out in military green, while other hidden features seem to scream out the Indian name: a rear compartment is covered in brown leather complete with tassels; a miniature Indian chief’s head protrudes from the cover of a front wheel; or a circle of feathers details the back of a rear view mirror.

“I like the styling of the Indian bikes and they’ve all got their own idiosyncrasies particular to the model and the period. They’re a little bit different and more appealing to the eye,” Jim explains.

“You get involved with each one that you work on and I like all of the models. But if you said to me that I could only have one Indian, I’d choose my 1950 Chief. That’s the one that really got me started.”

He says a fully restored Indian, particularly from the mid-30s on, is an extremely reliable motorbike that is capable of being ridden anywhere by a person with a minimum amount of mechanical knowledge. While not ideal in traffic or modern conditions, it is perfect on winding roads, hills and scenic countryside. It’s the reason why the Indian Motorcycle Club of Australia, which boasts over 200 members and of which Jim is secretary, often organises rallies alongside other international clubs. In fact, Jim stores a ’48 Chief Chopper in Sweden for this very purpose.

“I use the Indians as a means for touring the world. We call ourselves the fly-and-ride-club,” he laughs.

“The club organised a trip to Scotland in 2009 and we shipped 20 Indians from Melbourne. We were joined by people from America and Europe and did 4,000 miles in three weeks across England, put them in a ship and went to Belgium, then rode into France and back again.

“It’s about making an adventure. The key to riding an old motorcycle a long way is time; then if you do have a mechanical issue you can resolve it.”

But, at the end of the day, he sees his work as more of a responsibility than a profession – a labour of love, if you will.

After spending a morning talking to Jim and watching him in his element, it is clear how much passion, dedication and sacrifice has gone into creating this business. The workshop has its own character and reflects Jim’s personality so that it becomes more than just a garage; it’s his space.

While it may seem like a dream job to Confucius or an everyday person on the street, it’s no longer a simple business venture that spawned from an interest in vintage motorcycles.

If it wasn’t for people like Jim (and those who appreciate or restore any type of classic machinery will agree), it is almost certain that the Indian brand, and many others, would disappear from existence. Considering that the last of the first-generation Indian models were rolled out almost 60 years ago, it makes Jim’s work all the more important.

As he puts it: “You don’t own an Indian. You’re just a custodian of it. It might start off as junk but once you restore that motorcycle, you’ve saved it because you’ve put value back into it and it will never die.” 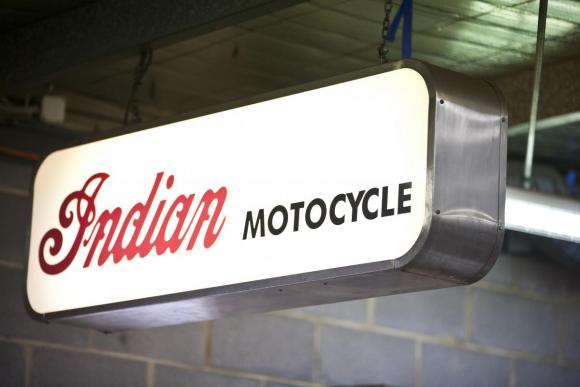