Trending
You are at:Home»Caves + Spaces»Inside the shed»Pam Am: Out of the Skies, into the Shed.

From the 1960s to the mid-1980s, there was a certain romance to flying. Passengers would dress in their Sunday finest, female flight attendants were the fodder of calendars and magazines, and pilots commanded the same level of respect as doctors and politicians.

During that time, there were perhaps no carriers more revered than Pan American World Airways. Commencing in 1927 as a scheduled air mail and passenger service operating between Key West, Florida, and Havana, Cuba, Pan Am was the largest international air carrier up until its collapse on 4 December 1991. It was responsible for plotting most of the international routes that are still used by airlines today and was responsible for many of the technologies and procedures that form the cornerstone of the air travel industry.

As the old ad campaign from the late 1980s stated: “Every country has an airline. The world has Pan Am.” And today, despite closing over 22 years ago, the Pan Am brand remains as strong as ever.

“What I remember most about flying in the 1970s is that the Pan Am brand really meant something. You knew you were on a Pan Am plane – the brand was so loud in every attribute. You felt it, you saw it, you could touch it and it was so appealing. And it felt different to other airlines,” Pan Am enthusiast and memorabilia collector Anthony Toth says.

“Today, that feeling doesn’t exist anymore. Airline brands now are fairly generic; when you walk on to any US carrier today you’re confronted by a sea of blue seats. It’s all blue leather on the front and blue cloth on the back. 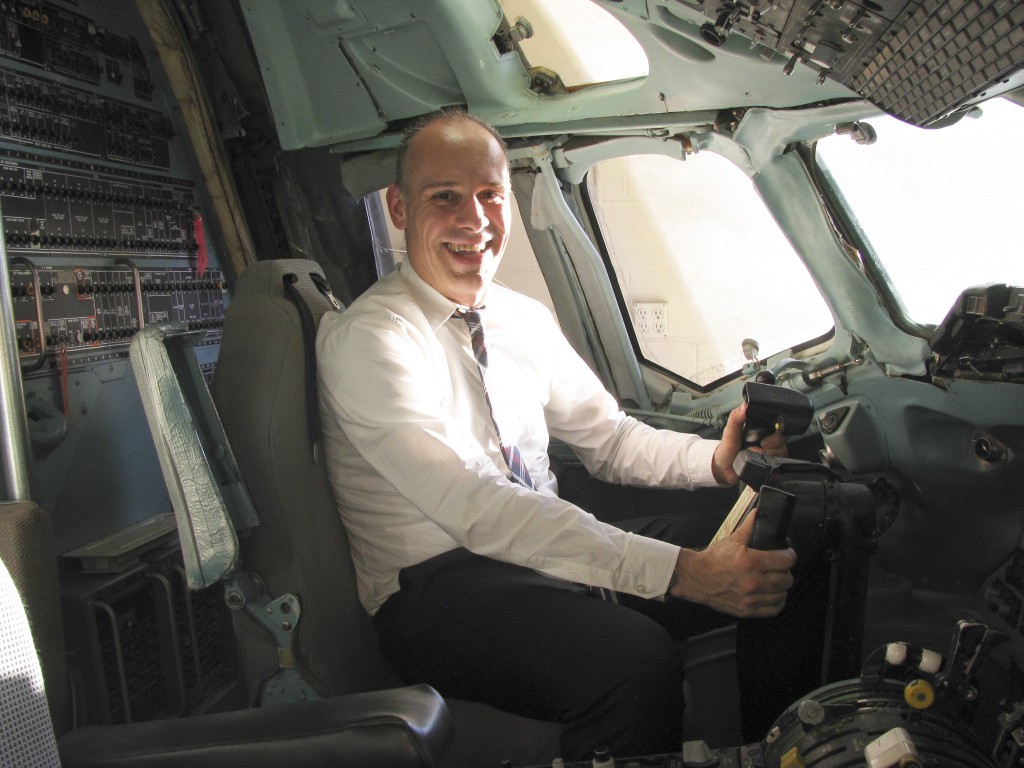 With the addition of a cockpit, Anthony is quickly running out of room.

“I’m just grateful that I’m old enough to have been able to fly on Pan Am and was able to experience it when it was fantastic. It was such an awesome time in US aviation history; the 747s were new and every airline was competing for business based on brand and service. Think about how different that is relative to today.”

Anthony’s love for the Pan Am brand has led him to build an exact replica of the first and ‘Clipper’ class cabins of a 1971 747-200 Pan Am aircraft in a warehouse in Los Angeles’ City of Industry.

“Flying was such an awesome experience as a child that being able to recreate it now in 2014 is kind of gratifying,” he says.

This marks the fourth cabin that Anthony has built, with each new build being bigger than the last. 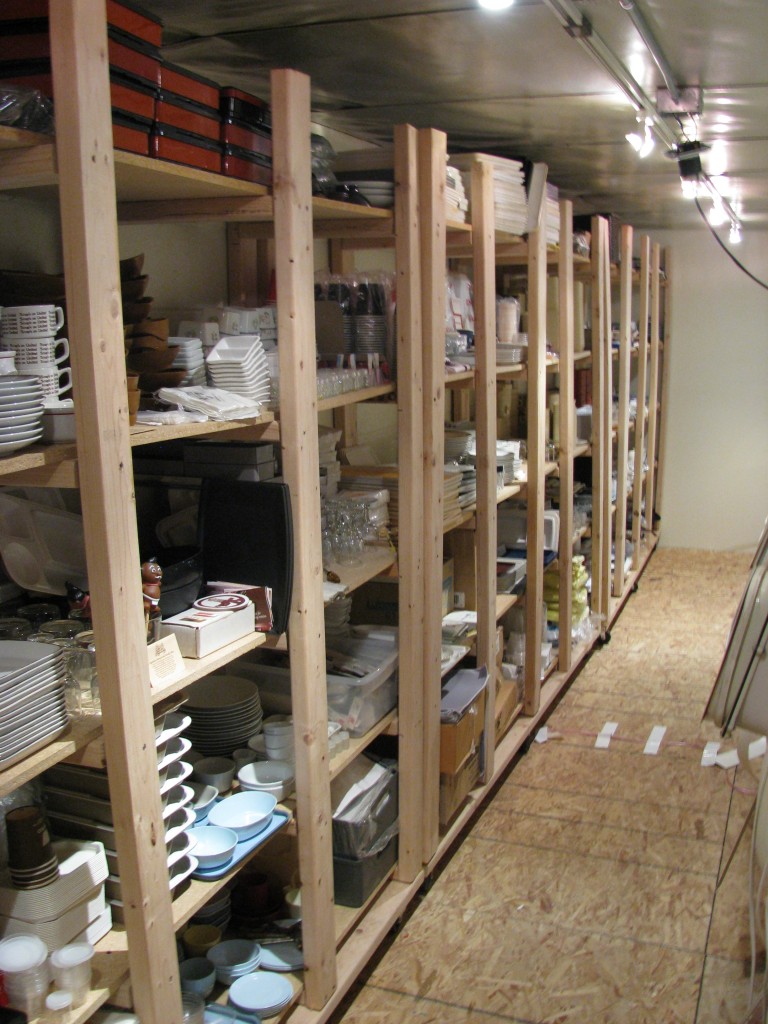 “I started building a plane when I was in my 20s. I finally had a real job and I could afford things, so I built a small cabin with a couple of windows and overhead bins in my house. Then I moved, so I had to rebuild.

“I used the opportunity to build a plane that was a little bit bigger. Then I moved again, this time to a place in Redondo Beach with a three-car garage. The cabin I built there was actually substantial enough for me to get some interest from Hollywood for film and TV projects. But I wanted something even bigger, so I decided to build a full scale cabin with a winding staircase to an upper deck, where I could store all of my collectibles, in one space.

“That’s why I made the move to this warehouse two years ago.”

The result is astounding. By walking through the door it’s almost as if you have travelled through time back to the 1970s. Everything has been replicated, from the carpet to the seat covers, to the printed menus and peanut packaging.

“When I first rented this facility, I hired a contractor to help build what I needed. He worked solely for me for an entire year to get everything done to my specifications. He would spend four days a week on his own and I would help on Saturdays and Sundays.

“We started by building a platform, which acts as the floor of the upper deck, and then we started from the front of the aircraft and moved backwards. It took a year to get from planning stage to having the ability to walk in and turn on the lights.”

Anthony explains that, while he is quickly running out of room, this is all still a work in progress and that he dreams of one day building a complete Pan Am economy class cabin.

“I bought most of the pieces of this plane in the Mojave Desert, at the Aircraft boneyard, and rebuilt it here in the City of Industry,” Anthony says. 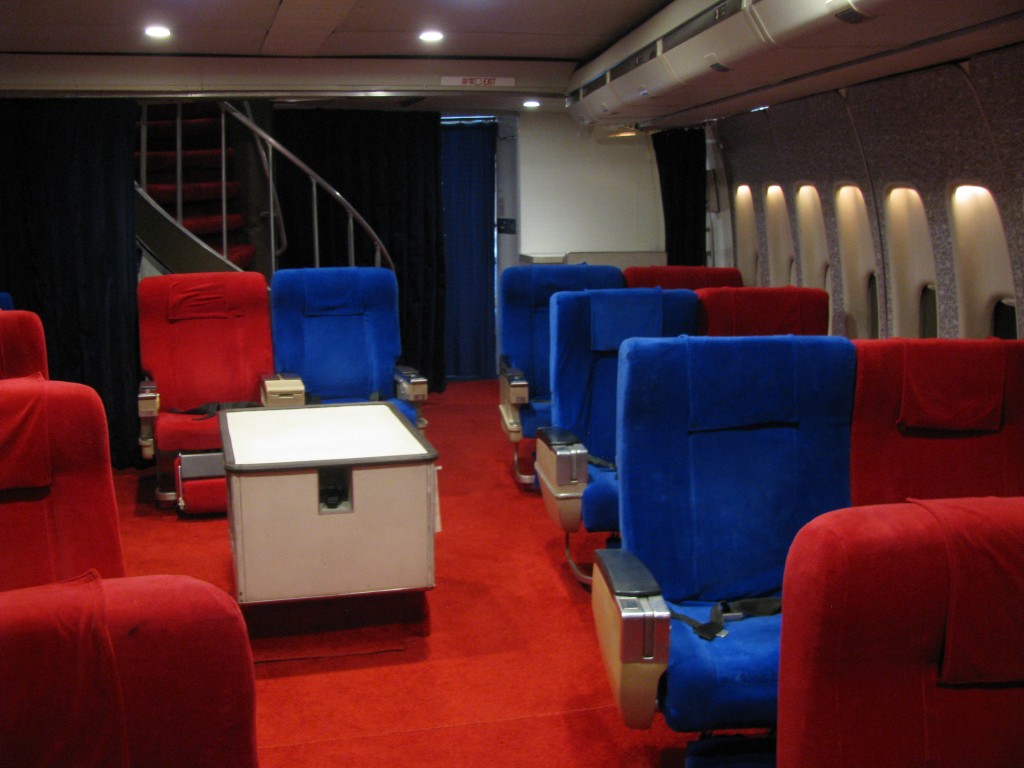 “I then restored the interior to exactly how it was on a Pan Am aircraft, including the wall coverings, carpets and seat fabrics. The seats themselves are actually from a Pan Am aircraft and were taken right off the plane.

“When I was a kid, I would run up to the closet in the nose of the aircraft and I would take so many photos of it. It was my favourite part of the plane.

“I would walk on to a plane and easily shoot five rolls of film. My parents worked in the photography industry so access to cameras, film and developing equipment was no problem.

“I would photograph everything from the side wall panels to the seat covers. I would also take the headrest covers off the plane for fabric samples. I would do this on every single flight I went on.

“I ended up with so many reference materials that recreating the patterns wasn’t difficult at all. I was able to remake everything – wallpaper, seat fabric, menus, luggage tags, boarding passes, even plastic bags for headsets. I have remade everything so I can enjoy it, right down to the peanut packages.”

Anthony identifies the spiral staircase as the signature feature of this particular plane. 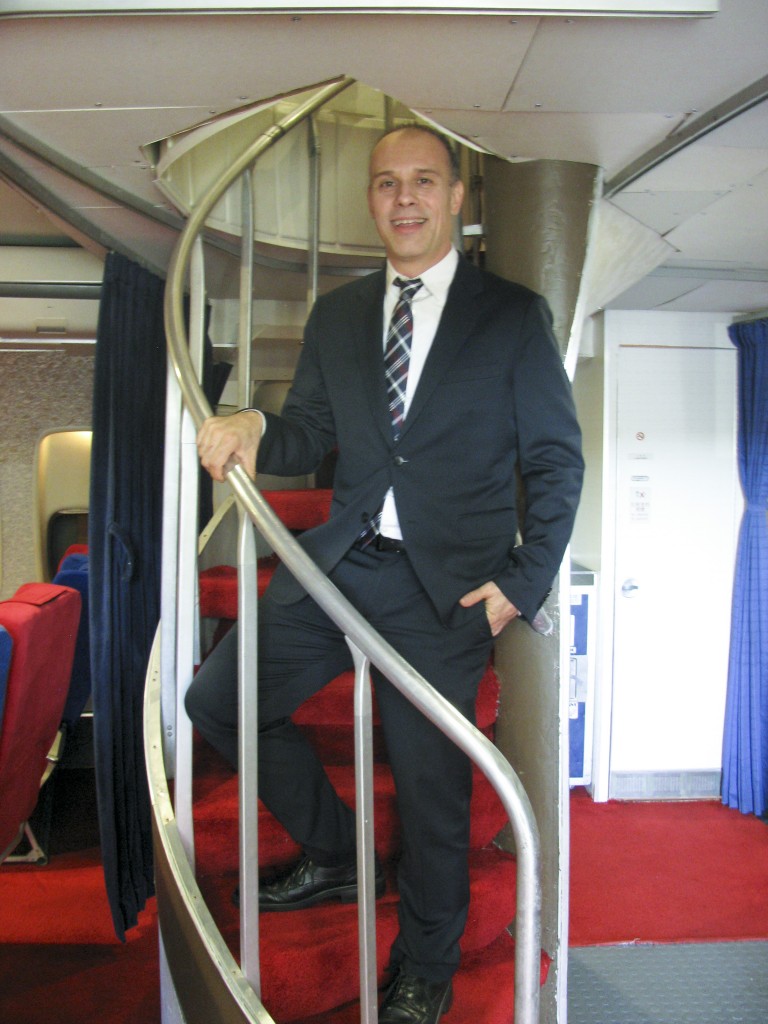 “Walking through the door at the age of five and seeing the staircase resonated so strongly with me that I think it impacted my entire life,” he says.

“Now, having one of my very own is my all time favourite part of my collection; it’s why I moved into this space and it’s why I’ve spent so much money on my hobby.”

Such is the extent of his collection that Anthony doesn’t know how much he has spent building it over the past 40 years. That said, he estimates it could be in the vicinity of $500,000.

“Really small details were important to me. For example, whenever I would fly as a kid I would bring a tape recorder with me and I would plug it into the socket on the armrest and record the audio and announcements from the pilot onto cassette tapes.

“When I got home, I would put a Pan Am headset on and listen to the recordings. In my mind it was like I was retaking the flight.

“As I got older, I started to acquire airline meal dishware and I would eat my meals on that. A bit later in life I would eat from airline dishware on the airline seat that I bought.

“Slowly, the world that I was creating got bigger and bigger until it became what you see here today.”

Forty-plus years after his first flight, Anthony still has the very first piece of Pan Am memorabilia he ever collected.

“I started by taking in-flight magazines and timetables, stuff my parents didn’t mind me having when I was five years old.”

Today he has thousands of pieces of merchandise from Pan Am as well as most other airlines, including Delta Airways, Trans World Airlines, Eastern Air Lines, Cathay Pacific, Pakistan International Airlines and Lufthansa. 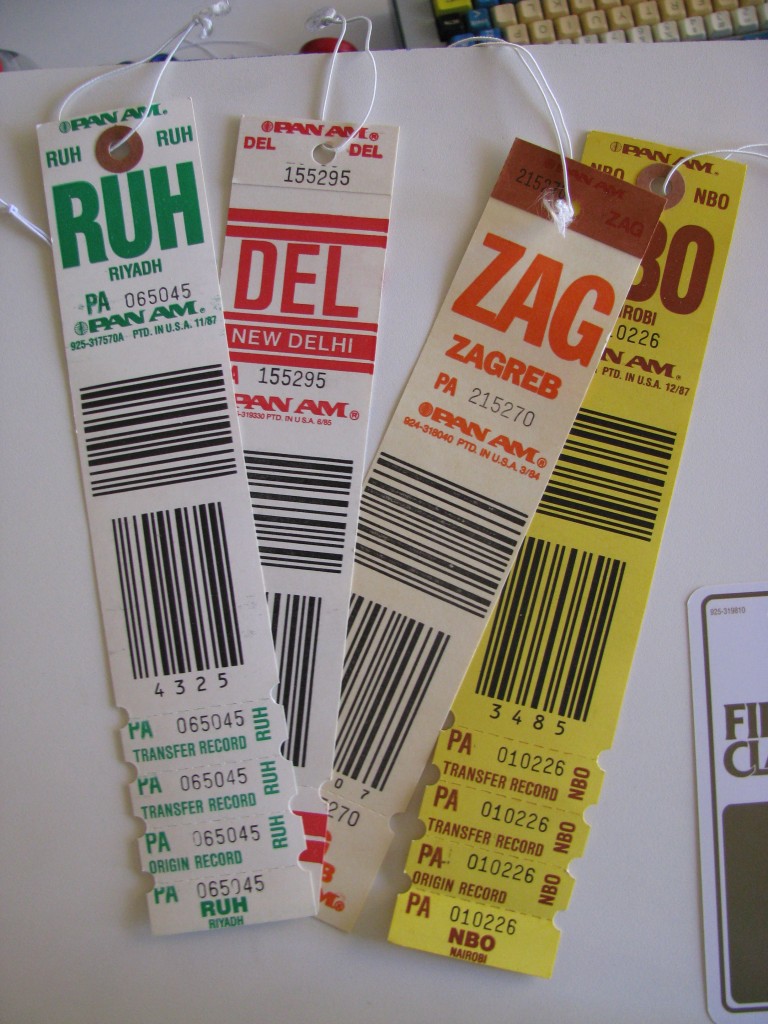 “I really believe I’m preserving an important time in our history of aviation.”

“Collecting is a sickness. I shop on eBay every single day without fail. Before I go to bed, it’s almost a ritual to go on eBay and source airline collectibles. I’m bidding on 20 to 30 items each day. There are also airline collector shows all around the US every month and I travel to all of those.

“There are so many things that I covet for which I don’t have the space. I try to be rational, but in the past I have bought things I couldn’t store. I had parts of the upper deck scattered throughout my house before I got this facility.”

It may come as no surprise that Anthony works for an airline.

“I’ve worked for United Airlines for 26 years and currently run the West division.

“Now, I’d like to turn my collection into a business so I can use it to make money when I retire, but I need to figure out just how to do that.

“I pulled a cockpit out of the desert about 10 months ago, and it’s cut so people can film inside it. Sony is doing a commercial in it, Playboy used it for a three-day shoot and I’m getting some interest for movie work. At this stage, though, most of the interest is in props.

“I was part of the TV show Pan Am, which rented all the props they used on the plane from me. I met the executive producer by total accident and two weeks later her staff turned up and was part of my life for a good year and a half, but the show wasn’t successful.”

More than anything, though, Anthony wants to be seen as a serious aviation historian and not so much a “crazy collector dude”.

“I want to preserve things for the future. Sure, people call me a crazy collector dude all the time but to me it’s about preservation. I would love to open a museum,” he says.

“When I was a kid, my parents knew how much I loved aviation so they took me to various aviation museums around the country, but I remember being disappointed with every single one of them. You would walk in and, without fail, it would be model airplanes hanging from the ceiling on string and cases of things that were somewhat interesting to look at for a minute or two. I couldn’t really touch or feel, or interact with the items.

“I think, subconsciously, that’s why I started doing what I’m doing.

“I really believe I’m preserving an important time in our history of aviation.”