Trending
You are at:Home»Hobbies»The Bonsai Warrior

If gardening is meant to be a gentle pursuit for the mellow and elderly, then bonsai is perhaps the embodiment of the craft. Clichés would suggest that the intricacies and subtleties required to work with these miniature trees requires a dedicated focus and an abundance of free time.

Well, if that’s the case, someone forgot to tell Colin Warren.

In fact, Colin is almost the picture-perfect opposite of what a stereotype bonsai enthusiast is meant to be. A plumber by trade, Colin also likes to restore cars, go hunting, make his own smallgoods and cured meats, work around the house, carve furniture … he even made his own bonsai house.

It would appear that breaking the mould is very much part of Colin’s makeup. He is a well-known figure in the world of bonsai after he successfully created one from an Australian native; something he was vehemently informed – and is still often told now – is not possible.

“I got told early on that you couldn’t make a bonsai from Australian natives. Well that’s pretty much a red flag to a bull for me, so I went out to prove them wrong – and now I’ve got a pretty good collection, to the point where I have more natives than non-native bonsais,” he laughs.

“I mean, I like Australian stuff – full stop. So naturally I like Australian native trees. I’ve been doing it for over 20 years so I’ve worked with all types by now. I actually got some gum trees from a friend early on and spent 12 years just growing the trunks of them and they’re now the pride and joy of my collection.” 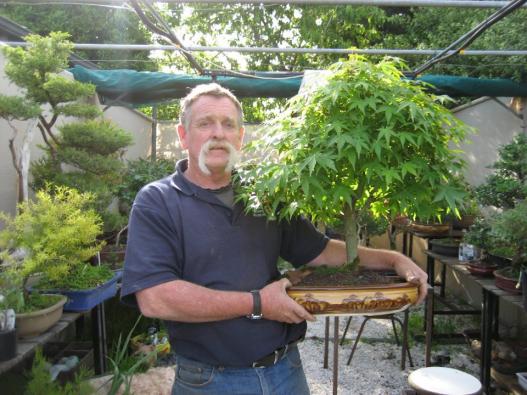 Although the Australian natives are fundamental to Colin’s collection, he became interested in the art through more traditional varieties. Not surprisingly, that first bonsai was approached with Colin’s unashamed enthusiasm – even if it was a little misguided in this instance.

“Well, my lady bought me my first bonsai just over 20 years ago. It was as simple as that.

“I loved it and got right into it: I put in a skylight so I could keep it inside, I trimmed it something like three times a day and mist-watered it morning and night … and, in doing so, I killed it.”

This sort of ‘lesson learnt’ is a fairly common occurrence in the bonsai world, but thankfully it didn’t put Colin off and he started to study up on the best way to be successful.

For those who aren’t familiar with the art of bonsai, there are certain regulations that need to be met, particularly if you want to take part in competition.

There are a range of different recognised styles for bonsai, but in very simple terms participants use cultivation techniques such as pruning, root reduction, potting and grafting to produce the tree to specifications.

There has to be a branch, either left or right, at one-third up the tree. If that branch is on the left, then the next must be on the right – or vice-versa. The next branch must then be on the rear above it, with the same formation spiralling up the tree. The thickest branch must be at the bottom getting thinner as it goes up.

Despite Colin’s non-conformist persona, he still very much follows regulations – something that is reflected by his success at agricultural shows.

At the recent Adelaide Show, he entered 10 trees and won seven firsts (six of which are natives), two seconds and the title of Grand Champion.

“I like to not over-complicate things, but if you’re going to do it you might as well do it properly and to regulation. If they’re not to regulation then they are technically not a bonsai.”

At the moment, Colin has roughly 60 pieces in his bonsai house, with a number of others outside as he continues to work on them. The bonsai house itself is a ‘Colin Warren original’ structure, which he built largely from wrought iron he got from his father. The current size and structure is slightly different to that first house as he has “extended and modified it over the years as required”.

The collection is many and varied, though there is little doubt that the Australian natives hold a special place. Part of the appeal is patriotism, but the other part was the challenge of proving others wrong.

So how could a self-trained bonsai enthusiast succeed where others have failed?

“When you work with Australian natives you need to think a little differently. If you follow all the books then all of your trees are going to die because they tell you to prune them at the wrong time,” he explains.

“I worked it out because of one simple fact – I’m a plumber. A lot of my work has always been dealing with blocked drains, and when I do that I know that the best thing to do is to establish which tree is causing the problem so I don’t have to move the drain machine twice.

“So one day when I was thinking about that it dawned on me that the gum trees shut down at a different time to most other trees – therefore you need to treat them differently when using them as bonsais. Normally you root prune your bonsais in winter because that is when they shut down, but a gum tree will shut down in summer because that’s how they survive in such a hot and dry continent. I started pruning my gum trees on the 14th of February and haven’t looked back since.”

He still maintains however, that it is something that everyone can enjoy and he’s always happy to help others with advice; whether it is at the highest level or for someone merely interested in getting started.

“I tell people that if you’re 20 years old you can start with seedlings because you’ll have the time to see them through. But if you’re over 50, you don’t want to take 20 years to develop a tree or you won’t get any enjoyment from it – particularly when you don’t have to.

“So if you’ve got the time, go to your local state forest body and buy a $3 seedling and it’s fantastic. But if you’re more like me, then you can go to a nursery and get a $35 tree – but even then, I’m really only buying it for the trunk.

“Once you’ve got the trunk – whether you’ve bought it or grown it over time – then you train the branches into regulation.”

How much effort you put into it, says Colin, depends entirely on how much time you have and what you want to get from it. Many people enjoy bonsai like any other form of gardening and get satisfaction purely from seeing their work come to fruition, while those who aim for competition will clearly need to allocate more time to prepare properly. Not that Colin watches the clock when he is working on his collection.

“The beauty of bonsai is that you really can spend as much or as little time as you want. I have a look every day to check if they need watering and sometimes that is all I do with them for the day.

“My lady tends to go to bed at about 10, and I’ll often go out then – sometimes it’s a quick check, but other times I might be out there ‘till 12 or 1 in the morning.

“It’s relaxing – I can be out there for a few hours and only take three or four leaves off a tree. Although, to be honest, that’s probably because I’m really just out there to have a few ales and relax.

“Mostly it’s just a clip here and there, but sometimes I really get stuck in. I’ve found that after about 15 years they tend to lose shape – even if you’re really looking after them – so once in a while I’ll bite the bullet and really cut it back. I got stuck into one a few years back and it didn’t look like the same tree when I was finished, but that’s one of the trees that won first prize in the show recently so I know I did the right thing.

“You practically live with them and everything happens so gradually that you don’t really notice that they’re not as they should be – but it’s still tough to really prune them right back. For me, it’s often on a night when I’ve probably had a few more bourbons than I should have, but that gives me the courage to really take to them.”

While the art of bonsai would generally be considered a solitary pursuit, Colin still has plenty of mates around who admire and enjoy the work that he does. Most importantly, the trees provide an important backdrop of serenity and relaxation around so many of his other interests.

Whether it is doing woodwork out the back or just a BBQ with mates, the bonsais are more than just something to look at; they create atmosphere and reflect the man who works on them.

Amidst all the varied interests and activities he enjoys, Colin’s efforts demonstrate that bonsai can be enjoyed by anyone. And the fact that so many of them are Australian natives reminds you that you can succeed in anything if you put your mind to it.