Trending
You are at:Home»Hobbies»Say it with Numbers 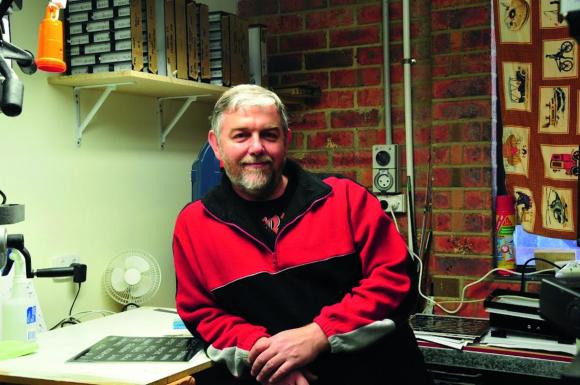 There is a fundamental basis to any timepiece … quite simply; it tells you what time it is. But when offered a preference, the particular watch or clock we choose says a lot about our personality. From a precision Swiss-made diving watch, to an antique grandfather clock or even a Mickey Mouse wrist watch – our choices reveal as much about who we are, as the piece serves its practical purpose.

If Doug Jackson’s personality could be displayed in a clock, I would say the Word Clock would have to be it. While the original concept may not be specifically his own, the manner in which it now exists is very much a reflection of him. These beautiful clocks utilise Doug’s knowledge and passion in electronics, with a touch of quirkiness and his affinity for teaching and helping others.

To those who have not seen them before, the Word Clock tells the time using words (somewhat obvious when you look at the name I guess…). It is made up of a module with a decorative face that can be customised to any specification. The module provides all of the electronics to actually be the clock. It is essentially the brains of the project. The module contains the timekeeping chip, as well as the display driver chips. All the module needs to operate as a clock is some LEDs (or LED Strips) and a power source.

As complicated as these clocks may appear inside (to the average bloke anyway!), their beautiful yet simplistic exterior can be tailored to the individual, creating something completely unique to the owner but enjoyed equally by anyone.

Doug makes these finished clocks – and the DIY module kits for the electronics enthusiast – from his garage at home; turning a passion into a growing side business.

Not only are they a reflection of him as a person, they would also appear to be the perfect summary of his professional life.

“I started as a trainee technical officer working for the Australian National University in electronics in the 1980s,” says Doug. “The basis of where I was working and how I was being trained meant that I covered a huge amount of electronics and computing. Essentially, I understood how to make electronic projects from basically nothing – which was fantastic.” 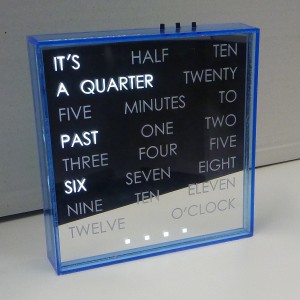 Indeed, all of Doug’s employment has helped him to maximise his passion in some way. He worked at a number of places designing computer gear for use within networks, including a stint in public service at the patent office. He ventured into computer security work and was also a part-time TAFE teacher for almost 15 years teaching students basic electronics and programming.

“You never quite realise at the time how all the little things you learn will help you in the future. For example, that time at the patent office was so important for me in understanding how the patent laws worked – and that has been very useful for me.

“Equally, I have a great empathy for the education system. My wife is a University Lecturer and we both really enjoy sharing knowledge and teaching skills to others and I think that has very much helped to shape the way I run the Word Clocks business now.

“I’ve always had an affinity for precision electronics and for things that are nicely designed, so while I never thought I would be doing this, I suppose it is a combination of all of those things that are important to me.”

Which is not to say that Doug is a natural artist…

“I was crap at art at school,” he laughs. “I was asked by teachers to stay away! But it is something I always enjoyed and I believe I’ve matured with it over the years.”

The first real step into the Word Clock world was very much by accident. Doug’s interest was sparked from an article in a magazine in which it looked at a clock called the QClock2.

“When I saw it I was struck by its beauty, but also its price! It actually reminded me of a Linux Screen Saver Clock I had seen a few years before, but the thought that this could become a real tangible clock – rather than a piece of software running on a computer – was really appealing to me.

“So I set about writing an article for Instructables.com (a community blog) showing people how they could make their own. It took quite some time, but I managed to get together a design which was different to the QClock2, yet gave people an option to make their own funky clock in an achievable manner.”

The response was quite overwhelming, with requests coming in from all over the world for more information or direct orders for a Word Clock.

“It’s fair to say I stumbled into this – I wasn’t trying to create a new product … and I certainly had no designs on getting a new job … but it seemed to just evolve.

“Now I’ve really embraced it and want to keep making it better and providing more options. I’ve redesigned the new version so that it uses acrylic and vinyl and strip lights, which makes it much easier to make than the original one.

“I never had plans to make clocks or kits for others, but I found I was getting quite a lot of requests so it seemed to naturally develop.” 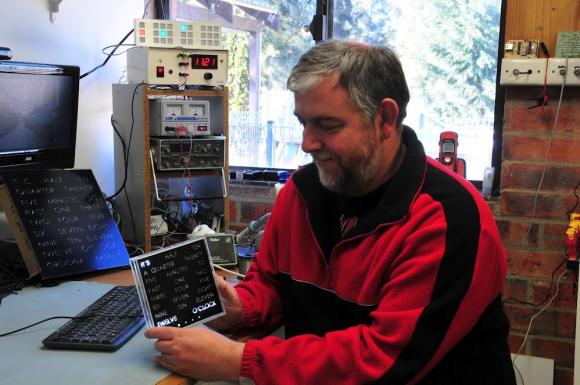 It has been a very rapid growth. Doug’s article first appeared late in 2008, and after the initial interest and a few improvements, things really started to take off by early 2010. Barely 18 months later Doug  receives over  450 orders per year.

He’s dropped back his day job to four days a week and has plans to reduce that further in the short term. The next challenge will be deciding if there is a time to move to the clocks full time.

“I don’t make a lot of money creating clocks, but I really enjoy doing it – and that is worth a lot personally. It’s fair to say that there are some decisions to be made with the family in the near future. Everyone wants to pay off the house as quickly as possible, but we’d like to enjoy the journey if we can!

“I’ve worked in Computer Security for years and while there is some satisfaction in helping people feel at ease, there is a certain sameness to what you do every day. In producing these clocks I feel like I am making a piece of art – or helping others to make their own – and that gives a wonderful sense of satisfaction and worth.”

As someone who also makes a living creating a physical product you can hold and share with others, I understand Doug’s excitement. It’s a little thing I like to call ‘school kid syndrome’ and can be likened to that feeling of going home and proudly showing your parents what you made in art that day.

“I know exactly what you mean!” says Doug. “Every one of my clocks I love. And I should add that it used to be that I loved the clock itself, but now I really love the reaction from people when they open them. My personality thrives on feedback so to receive emails from people who love their Word Clock is really lovely and makes the whole process so enjoyable and rewarding.”

Between the complete clocks and the DIY kits, Doug is allowing people to be as active and involved as they wish – a lovely gesture that a large company would not go to the trouble of providing. It is, without doubt, another reflection of his personality through the business.

“At this stage my orders are roughly two parts full clocks to one part kits. I like being able to help people who want to create one themselves and share in the feeling of creation, but I also really enjoy providing a service to people who simply love the clocks as a piece of art and want to enjoy one at home or give one as a present.

“There is no limitation to what you can design. I completely encourage people to come up with whatever design or personal touch they want, but equally I really enjoy working with people who want to personalise it but don’t really know exactly what is possible or need some ideas to get started.”

While Doug clearly enjoys the education part of his clock business, he takes great delight in the fact that he is also still a student.

“I feel like I’m constantly learning with it too – and that is a lovely bonus. I don’t want to feel like I’ve worked out how to do it all or that I can’t be taught anything new with it. As much as anything, it would get pretty boring.

”I’ve always worked on the basis that if you’re not learning anything, then you’re just consuming life – and that is no fun. Right now … I’m having fun.”