Trending
You are at:Home»Hobbies»Traditional Italian salami in modern Australia

Having forged plenty of friendships and a long lasting relationship with an Italian over the years, there’s one thing I’ve observed about them and that’s their undying passion for food. Everything is made with love and it reveals itself in the taste – whether it be morish desserts or hearty pastas – it’s always delicious.

I think a lot of this love comes from pride and being able to live up to generations before them or perhaps it’s just a skill embedded within their genetic make up. Regardless of the fact, I’m just grateful that they’ve brought their pizzas, lasagnes, cannolis and sauces over to Australian shores for all of us to enjoy. 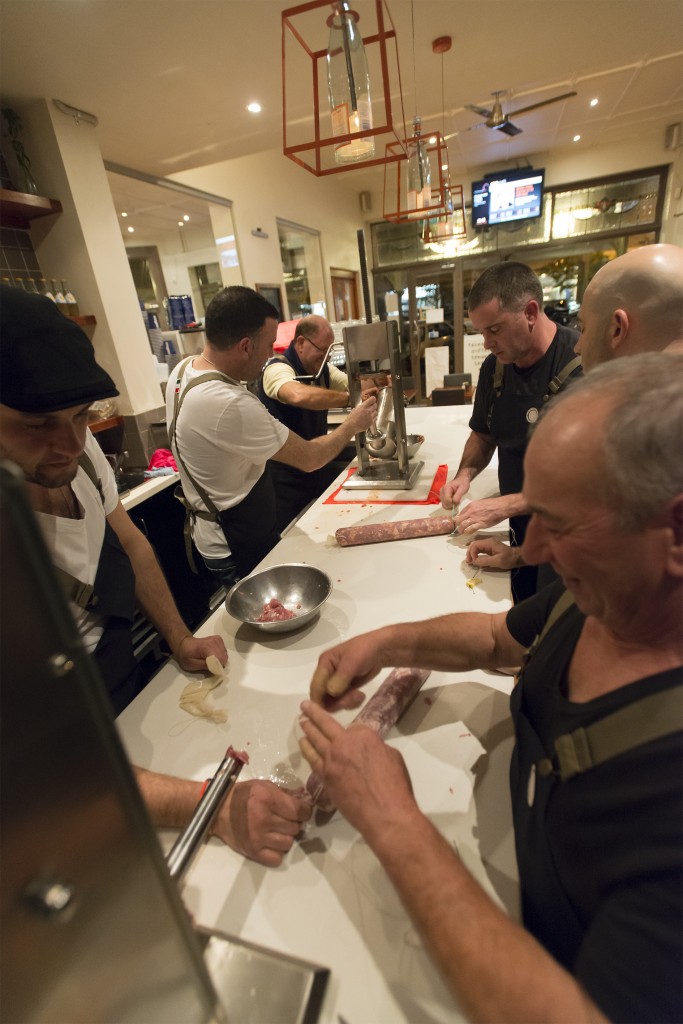 Every winter, Italian families across the country get together to make their own homemade salami.

Another thing I’ve been exposed to is their tendency to brag, particularly when it comes to comparing their signature dish to someone else’s. This is often the domain of the women in the family except for when it comes to the Italian version of ‘man food’ and that’s homemade salami. The taste, appearance and texture divides the men of all generations and “my salami is better than yours” becomes a regular expression.

Every winter, Italian families get together in sheds around the country to create some of the most delectable artisan smallgoods you’ll ever wrap your gob around. And once you’re fortunate enough to try some, you’ll never want to eat deli bought salami again. To put it bluntly, it doesn’t even come close to this goodness. Secret recipes are handed down from generation to generation and while this has generally been the accepted rule, two Melbourne lads have made themselves the exception.

Peter Mastro and Frank Bressi are proud Australian-Italians and while they admit that salami making hasn’t always been the apple of their eye, the tide has shifted in the last decade or so.

“I grew up with homemade salami and I remember hanging it up in the shed with my dad every winter. I wouldn’t say that it wasn’t fun but when you’re young, doing stuff like that felt more like a chore. It wasn’t until friends came over for the first time that I realised it was unique. They would divulge in it and rave about it while I was always under the impression that everyone made it at home,” Frank explains. 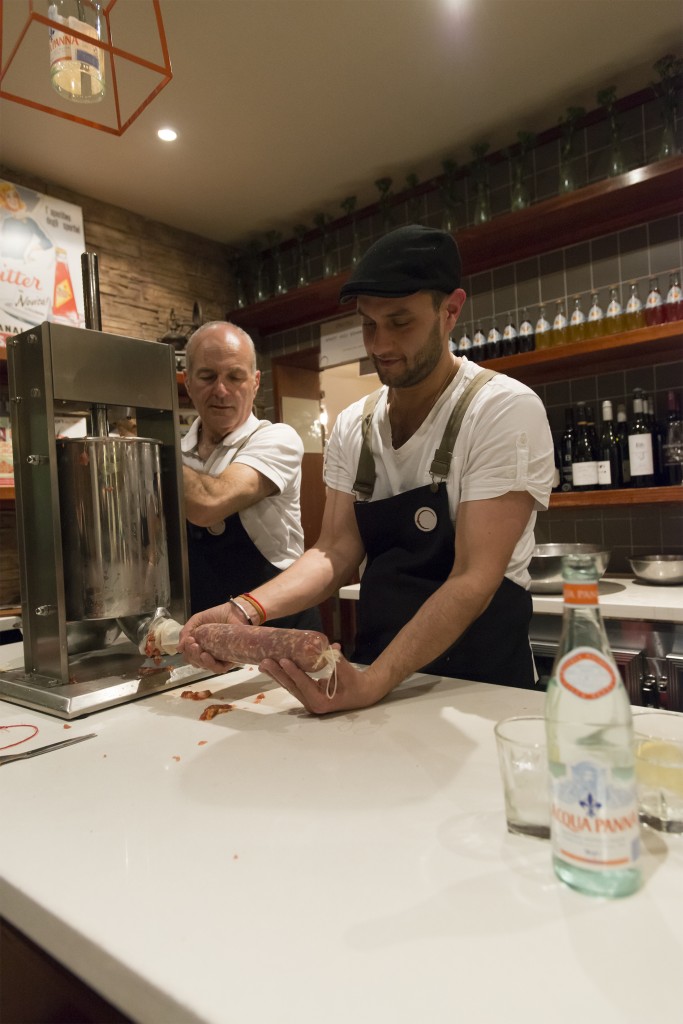 Peter was hooked by the home-made salami at a young age.

One of those friends was Peter and he couldn’t get enough of the stuff – it was the only thing he wanted to eat.

“When we were at uni I would go to Frank’s house and eat all of his food. Eventually I said to his dad, ‘I love eating this salami but you need to teach us how to make it’ because as a kid, it was all I wanted to eat,” Peter continues. “So he taught us his way and in the 10-12 years that have passed, we’ve gone from measuring with our hands to measuring with scales. We’ve also gone from stuffing the sausages with equipment that’s 400 years old to modern technology.

Frank is an ex-banker so he’s incredibly fussy when it comes to numbers and measuring ingredients which means the process has gone from extremely rustic to cookbook-esque but the end product is one that the boys are extremely proud of.

“We measure everything by the gram because that way we know exactly what has gone in and if it’s got a great flavour, we can replicate it the following year. We write everything down in log books and over the last few years I’ve monitored the salamis almost every day,” Frank confesses. “I go in and weigh a sample of them to see how much weight they’ve lost over the curing process.”

The boys have slowly perfected their recipe and haven’t changed it for a couple of years now. It’s very different to the original recipe they inherited from Frank’s dad and while the older crew didn’t like it in the beginning they assure me they’re all converted now.

“Ingredients are very different depending on which part of Italy you go to but at the end of the day it comes down to what you and your tastebuds like. We love fennel and it’s a flavour that definitely resonates throughout our salami. Some like chilli and some don’t, we love the stuff and as such we make a mild, hot and super hot variety.

“We’ve also started to add our own moulds to them which is more or less like a white cheese mould. We make our own formula up and it’s all natural. If you hang a salami with mould on it in the middle of a bunch of salamis without mould, in the right environment that mould will eventually spread to the other salamis. Because we do about 300 at a time and do it rather quickly, we spray all of the salamis with the mixture. You can have too much mould or not enough but we’ve struck the right balance and it certainly adds more depth and flavour – like a mould does to cheese.”

The boys get down to business in June/July every year because they require a cool climate for the meat to cure effectively. While curing, it doesn’t matter if the temperature plummets but problems arise if it gets too warm. Bacteria can grow, whole batches can be lost and people can get sick. This also explains why homemade salami is generally concentrated to families in the southern half of Australia.

“We don’t have cool rooms, we have sheds and because we don’t have a commercial environment where we can monitor and set the temperature, we do it during the coolest months of the year. You don’t want it below 10-12°C and not really above 18-20°C,” Peter explains. 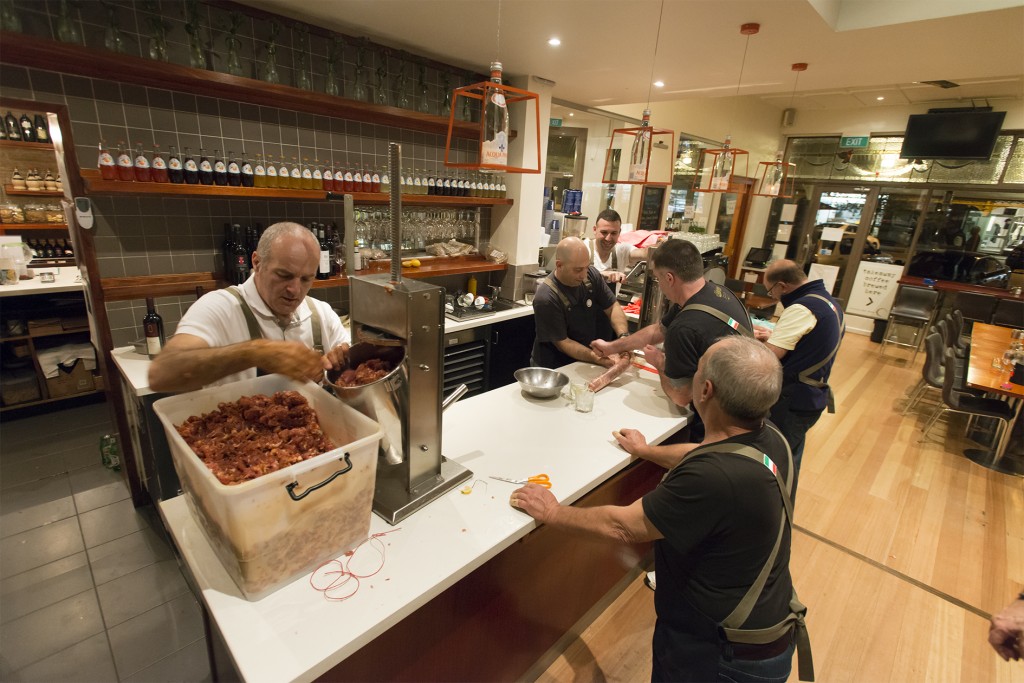 The boys ‘secret click’ as been slowly invaded over the years

The duo have been making salamis together for over a decade now and while they were content making it together, a few of their mates wanted in. At first they were hesitant to allow others into the ‘almost secret click’ but Peter’s dad was first to obtain lessons. Two of his friends jumped on the bandwagon; Peter’s father-in-law and cousin Lawrence squeezed in and then came the ‘Aussie’ butcher to ruffle the Italian’s feathers. He supplied Peter’s café and after a conversation or two about Peter and Frank’s love affair with pork, he became curious. They boys admit that it was weird teaching a butcher how to make salami but was certainly a great asset to have on board.

“He cuts the whole pig up for us and whatever doesn’t get used in the salami get’s sold at his shop. He had never stuffed a salami by hand before so it was pretty cool to teach him how to do it while learning all of his tricks too.

“The salami making goes all night at my café in Middle Park and it’s a perfect opportunity for all of the boys to get together, have some wine, put a pasta sauce on with some of the minced pork and share plenty of friendly banter. The old boys tease the young boys, we tease the old boys and all of the phallic salami jokes come out when the pork is being piped. The jokes are usually recycled every year but they always make you laugh… we all have a lot of fun,” Peter says. 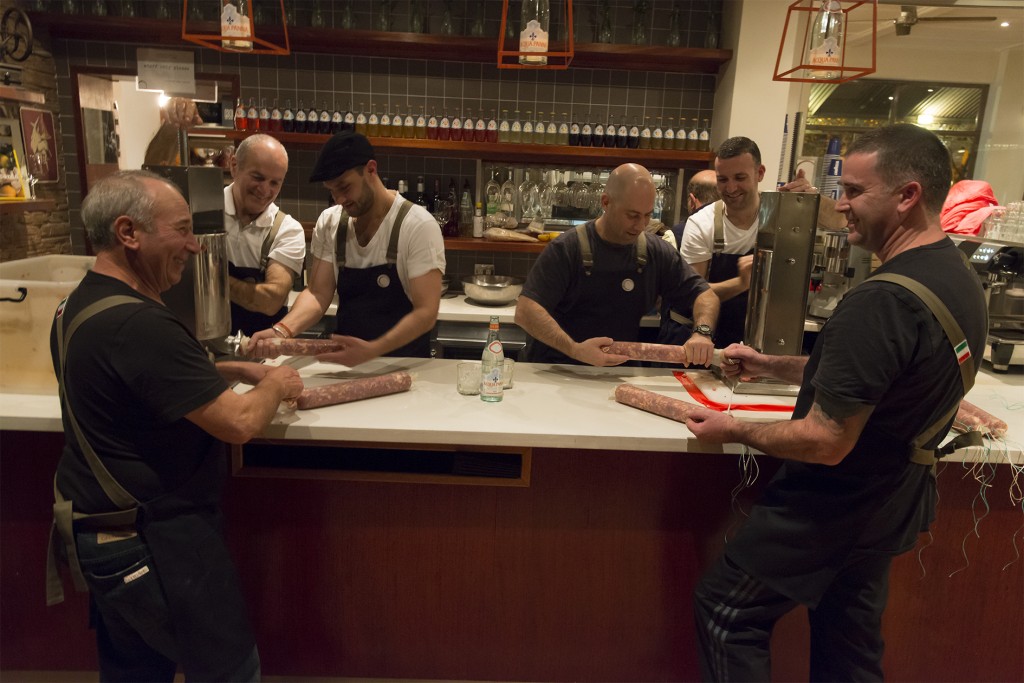 There is always plenty of banter and jokes when the pork is being piped.

With around 300kg of mixture being funnelled into casings each year, there is no room for error and Frank makes sure correct measurements are always employed. The only other prerequisite is ‘no women allowed’ while production is under way. It’s a bit of an old wives tale but one year a female customer popped her head in while the boys were in the thick of it and they lost the entire batch… 300kg of pork down the drain and eight battered egos to go with it.

Once the salamis are filled, they’re sent over to Peter’s dads shed in Essendon where they are hung on the ceiling for 6-8 weeks to lose 30-40% of their weight and develop an unmatched flavour and colour. It is in this shed that the bar fridges are filled with salami rather than beer – it’s their man space and they want to share their passion with a broader audience.

“Every Italian thinks their salami is the best but we’ve got two pieces of paper that says ours is second and third best in Melbourne. We came across the Salami Festa a couple of years ago and while we didn’t think much of it at first, we knew we had to enter our product.

“It turns out that it was a bigger than we could have imagined and in the first year we took out 2nd prize,” Peter says.

In that first year at the Salami Festa, Peter entered the team under the name Brucia Culo which translates to ‘burnt bum’ – the after effect of eating their super hot variety. Unfortunately Frank had no idea that Peter had enetered them under the name and when he was called up to accept their award in front of 1000 people he was a little embarrassed.

“Every Italian person in the joint cracked up with laughter and clapped their hands and while it was hilarious, we had to come up with something a little bit more appropriate. Saluministi is something that I came up with – it’s not a real word but one that we think represents a salami professional. Thankfully Frank liked it a little more than Brucia Culo,” Peter laughs.

The boys use 300kg of pork each year.

The Super 8 was formed long before the competition begun and will continue to kick on for years to come with a ninth member being added in 2014.

“We’re bringing a flavour and taste to people that they have never experienced and for us that’s exciting. All of our friends love the stuff and they try to make a stick or two last for a few months. We’d love to be able to make it in commercial quantities but there are plenty of rules and regulations that stipulate the fact that we can’t. We do have an exciting venture on the horizon though so hopefully more people get to experience our salami and homemade sausages soon.

“Food is cool at the moment and so is all of the old school, traditional recipes. We think it’s certainly inspiring our generation to get into food and to go back to their roots to recreate food and recipes from generations before them. For us, it was a way of ensuring all of these amazing recipes lived on, long after our grandparents moved on.

“We’re keeping the tradition alive – one pig at a time.”