Like most things ‘automotive’, steering wheels have come a long way. The horn button was a useful addition to the very early autos; then the materials expanded from timber to metal, onto forms of Bakelite plastic and, later, leather and other trim over newer plastics.

Over the past 40 years, auto companies have also added copious amounts of buttons to control almost every part of a car’s audio and communication system, as well as indicators and cruise control. I’m sure that someone somewhere is working on an integrated coffee cup holder… 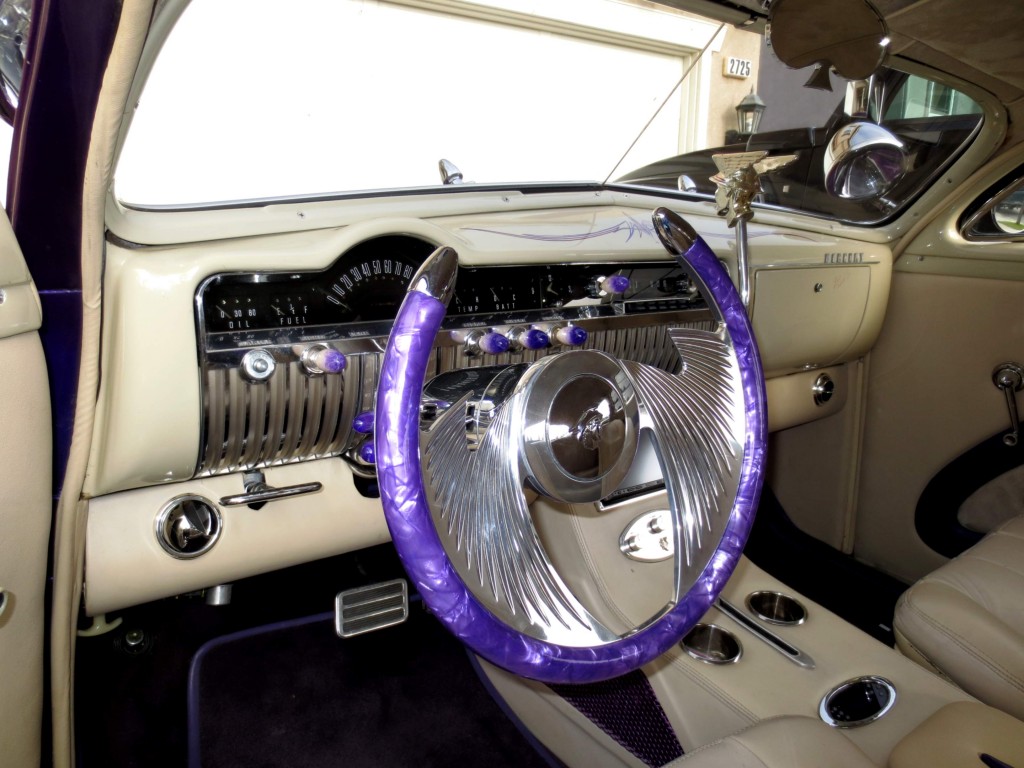 If you’re one of those blokes who wish that steering wheels were simple again – back in the days when they had a certain classic sense of style about them – then maybe Wayne Basinski can help.

From his garage in the rural outskirts of Bega on the NSW south coast, Wayne and his wife Lee run a successful business restoring, enhancing and customising steering wheels. You’ve likely seen examples of Wayne’s trademark wheel work, where the classic pearl finish stands out for all the right reasons.

The high quality finish is such that many would assume they come from the US, rather than a home garage in Bega. But Wayne is undoubtedly the go-to global expert on applying pearl finishes to steering wheels.

He is also a self-confessed car nut – the numerous boyhood toy cars from the ‘50s that take pride of place in his garage are testament to that. As a kid, he was more at ease drawing Ford Customline cars in his school books, rather than listening to the teacher. And look where it’s gotten him!

I caught up with Wayne recently and the first question I asked was also the most obvious: how did PearlCraft Steering Wheels start up? 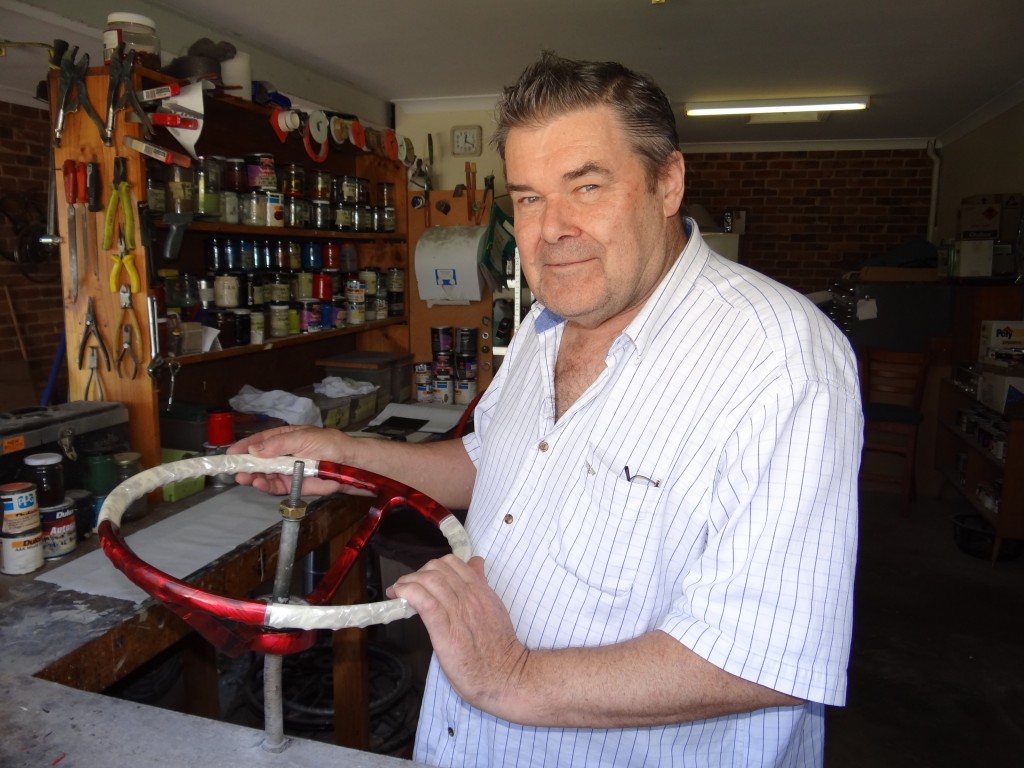 Wayne and one of his custom wheels.

“Back in 1976 I was a fireman and the routine was four days on, four days off. That left me with a fair amount of spare time. With that in mind, my brother-in-law introduced me to Bill Clark, the original owner and inventor of the process, who was working towards retirement,” he explains.

“I believe Bill developed the process after originally seeing the pearl finish used as a decorative highlight on musical instruments (such as guitars, piano accordions etc) coming out of Europe after World War II.

“So, being handy with my hands and having a love of cars, Bill showed me the way and it soon became a full-time business for me.”

Since then, Wayne has incorporated some of his own ideas to improve the end product. The raw materials used are harder to obtain today (seeing as they are based on old formulas), so he has them specifically produced. That said, the process that Wayne follows to create these unique steering wheel solutions is somewhat locked away, much like Colonel Sanders’ 11 secret herbs and spices.

The majority of Wayne’s customers are chiefly looking for individual classic designs for their vehicles. He says that today’s owners are far more fastidious than the original owners, as they want to show them off at events and to their mates.

“Most of my customers are from North America as you can not purchase a pearl wheel over there.” 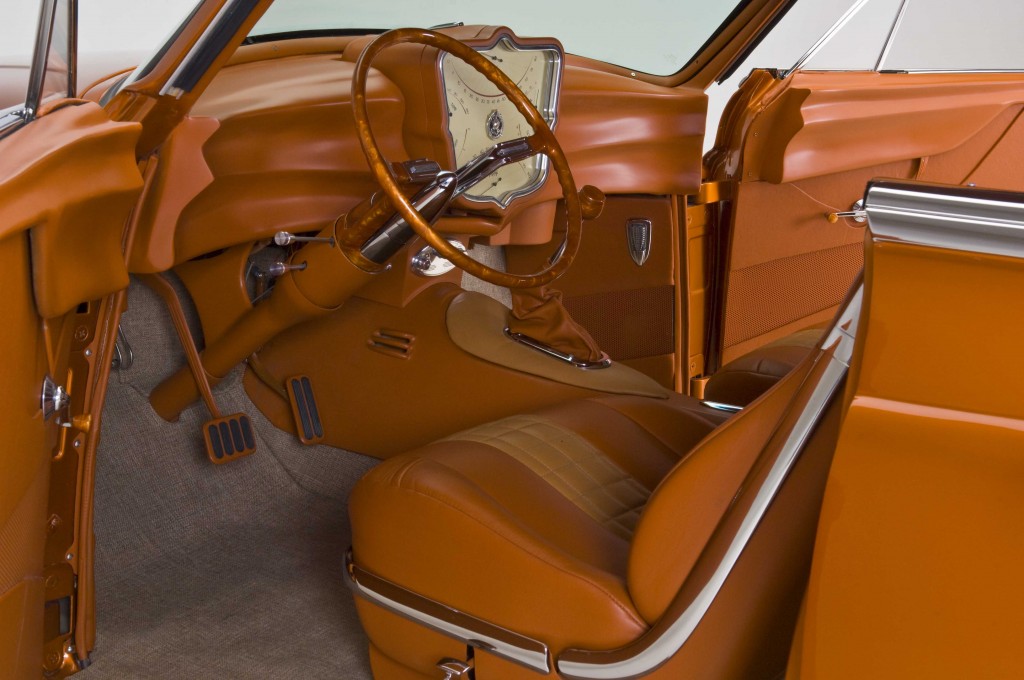 Sweet wheel for a sweet ride.

So each week, wheels of all shapes, conditions and sizes arrive through the post for Wayne to perform his magic on – but there is a cap to his creativity.

You can forget about to trying to enhance any of today’s new age soft grip wheels, as the pearl finish can only be applied to hard surfaces.

Each wheel is an individual work of art that is lovingly prepared by Wayne and greatly valued by his customers around the world, as the accompanying pictures demonstrate.

There is no doubt that Wayne is a unique artist in residence, from his garage to yours.