Listen to me very carefully Skippy, Clancy has twisted her ankle and needs help. Go back to Ranger Headquarters and tell Jerry to bring the helicopter.

As iconic as Skippy the Bush Kangaroo is to Australian culture, the half truck/half car, known as the Ute is arguably more so. It’s bigger, closer to our rural heart, the mainstay of most suburban streets and best of all – invented by an Australian.

The story of how the Coupe Utility came to be is no secret. How Australian designer, Lew Bandt, working for Ford Australia was given the spec following a letter from a farmer’s wife. The late Ford historian, Adrian Ryan, quoted the letter as including the now famous words: 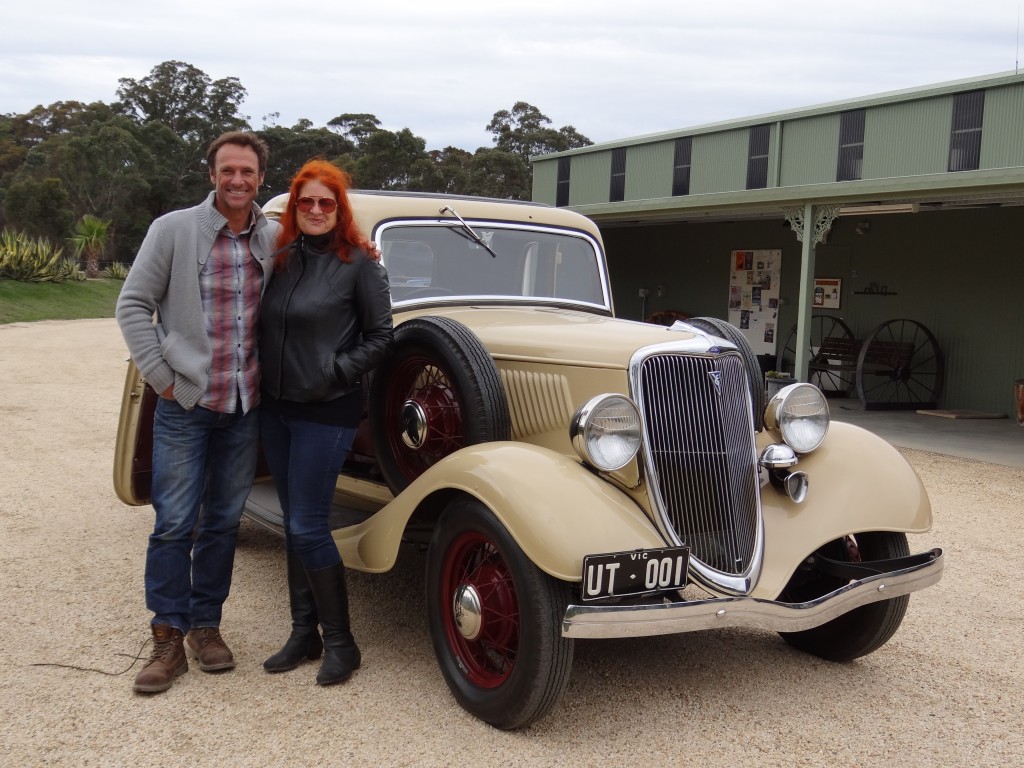 An Australian invention that is now used around the world.

Can you build me a vehicle that we can go to church on Sunday without getting wet, and my husband can use it to take pigs to market on Monday.
The assumption is that on Monday the pigs would go in the back. That was 1933 and a year later the ’33 coupe modified by Bandt had put the option into production. The model type would be accepted worldwide in various interpretations, but in Australia it would have a profound effect. For the top brands, Ford, Holden and for a time Chrysler, it created a war of the Utes. It’s fair to say that this rivalry wouldn’t reach Cold War status until the introduction of the Falcon in 1960. It would take the launch of the first revamp, the XM, for things to really heat up. And heat up it did.

Unlike the coupe from where it came, the utility had its practical uses, but essentially, like the 2-door, it was part of a line up that pushed the brand with the ultimate goal, or Holy Grail: to have the best selling sedan in Australia. Although not having the sales figures matching other models in the line up, manufacturers were slugging it out toe to toe for the hearts of Aussie Ute buyers.

Chrysler, with their Valiant range, put up a good fight. The slant six and later Hemi range backed-up by big V8s were the base for strong and reliable vehicles. The stand-out Ute would have to be the VH/VJ Town & Country. Coming with a vinyl roof and available with three engine options, the 318 V8 version is the rarest. Farmer or town squire – anyone looks good in vinyl. By 1980 Chrysler Australia was no more and it was left up to the red lion and the blue oval.

Chrysler, Ford and Holden weren’t the only manufacturers to offer the utility option in Australia. In 1951 Peugeot 203 panelvans were imported and officially converted into ‘Styleside’ utilities. BMC offered an option with the A55 in 1960 and later replaced it with an Austin 1800 version. Datsun offered its now cult 1200 Ute. Subaru had its 4WD Brumby, which was hugely popular in Australia. Even today, devotees will bore anyone silly with tales of the little Ute’s durability, reliability and tree climbing abilities. The top of the line model had dual headlights and flip-up glass roof panels which had that Pontiac Firebird feel when driving – well almost. 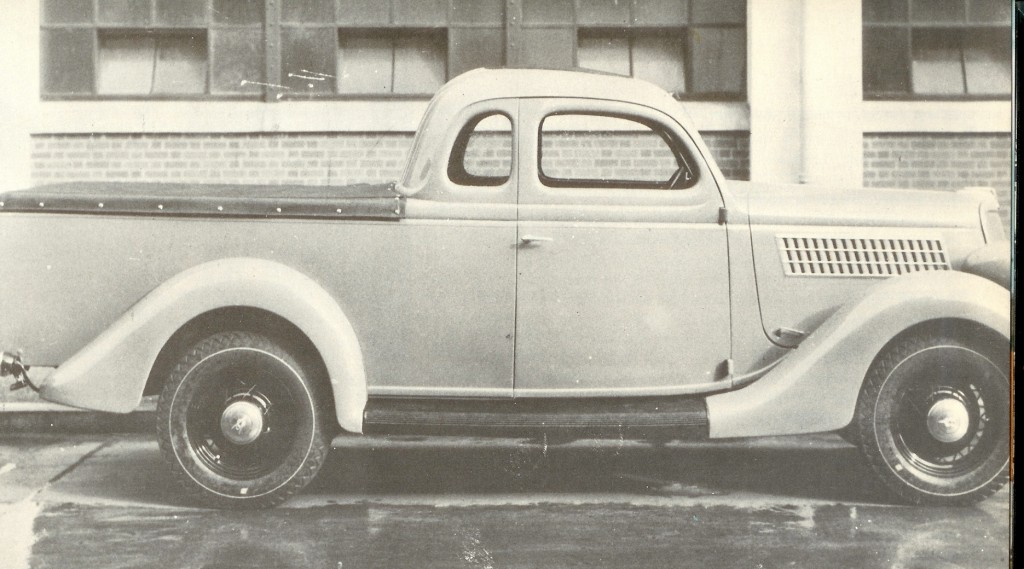 Can you build me a vehicle that we can go to church on Sunday without getting wet, and my husband can use it to take pigs to market on Monday.

A flash in the pan was the Nissan Ute, courtesy of the well intentioned Button Plan. A rebadged XF Falcon which went the way of re-badging generally – nowhere. Also short-lived was Proton’s Jumbuck, which was more cute than workhorse. If a person wanted to test their survival skills, they could roll up to a Ute Muster in one. To add spice it could have an LPG conversion. In fact, that’s a Bear Grylls challenge.

If ever you needed conformation of the Ute’s place in Australian culture, a Ute Muster is the event to experience. Usually tied-in with agricultural shows or a Bachelor and Spinsters Ball a rural gathering of Utes is a must see. Musters are held nationwide and the annual event in Deniliquin, NSW attracts 20,000 fans.

Erica Laing of the Deni Ute Muster describes the event as being renowned for showcasing the true values of rural Australia; integrity, unpretentiousness and hardworking topped off with wide smiles and fun loving spirits. It is recognised as one of Australia’s premier rural events that encapsulates the diversity, tradition and vibrancy of rural Australia, at the core of the festival is the Guinness World Record breaking Ute muster and blue singlet count which sees thousands of people from every capital city, town and corner of the land converge on Deniliquin to be part of this unique event.

In the television series Skippy (91 episodes, 1966-70) there are no Utes, only ranger Matt Hammond’s white XR Fairmont wagon, affectionately referred to by enthusiasts as the Skippy Wagon. But in the spirit of pouch-equipped native animals, when Skippy had an important message or something that needed to be carried, she chucked it on board. Just like a Ute. In fact, if you have a Ute, there’s no shortage of friends needing a freebee. Someone always has a fridge that needs moving. On the other hand, with friends’ bludging a lift, there’s the easy out – sorry mate got a Ute. 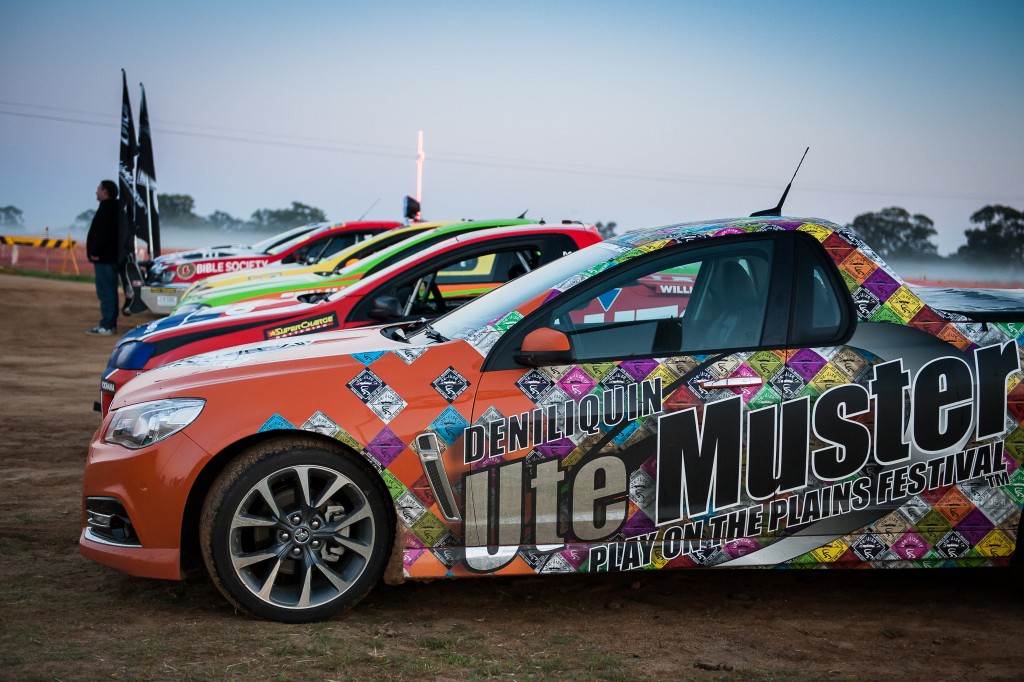 The Deniliquin Ute Muster is recognised as one of Australia’s premier rural events that encapsulates the diversity, tradition and vibrancy of rural Australia.

Although, if you had a bench seat, you’d have room for a third. In the late 1980’s Ford promoted the bench seat in their Falcon sedan as the “six seat option.” Now Nanna can come along. A bit squishy in a Ute. One YouTube option solves this problem by bolting a domestic couch in the load area. However, this is reckless driving and has resulted in much mayhem. The section in the handbook marked Things Not to do in Your Ute includes:

Do not carry passengers in the load area. Do not tie tow-rope to rear bumper. Do not place refrigerator vertically in the load area unsecured. Both Holden and Ford embraced the Aussie Ute – good and bad. The good: who can forget the Sandman (1974-78) and Maloo HRT Edition (2001, rated at 350kW). Or

The bad: “palletgate”, claims the Commodore load area wouldn’t take a standard pallet or 1200 sheet and the VY SS Storm “doin’ donuts” ad kicking up dust and a stink. Apparently seeing circle-work on TV encourages bad behaviour. Or the 2005 XR8 MKII TV ad which has a slow moving Ute driving down the main street of a country town. As it does, women abandon their jobs and follow the Ute. The advertising Standards Bureau was hammered with complaints.

…our object with the television commercial was to demonstrate the vehicle’s broad attraction in an exaggerated, fun and entertaining manor. Undeniably, the women are used in a humorous manner to exaggerate the unrealistic attraction of the vehicle but in no way does the commercial discriminate against or demean women on the basis of their sex.

One plumber I know summed up the experience of driving his Falcon XR6 Turbo Ute as “abseiling without ropes” – scary meets scarier. He said it was his “boy toy” (payload was up to 500kg, hence toy), a present to himself for whatever reason forty year old men think they need a reward. And he, like many others could lean back, bonnet up, and marvel at a 270kW DOHC turbo straight six – the finest machine (the FPV F6 is rated at 310kW) of its type in the World. And Aussie built.

But times have changed.

I know a landscaper who has a Ford Ranger. He loves his truck and when he comes to visit he can’t bring himself to park on the street. He nestles it about a metre from my front door. Sometimes it’s covered in mud. It has driving lights on the bull bar that are so bright the LUX value cannot be accurately represented by numbers. He’s tricked it so apparently it can go ‘anywhere’. His dad had an XE ESP 5.8 (1982-84) – the blue oval lives on, but things are different.

The dual cab sports utility is now the business/pleasure cross-over vehicle of choice. They work like a horse, they go anywhere and you can fit in the family. Although you’d struggle to get Nanna in without an approved lifting device. 2013 VFACTS figures for overall new vehicle sales put the Toyota Hilux third at 39,931 units sold, just behind the Mazda 3 (42,082) and Toyota Corolla (43,498). The Ford Ranger chalked up 21,752 sales coming in tenth. Dwindling sales of the big family sedan, traditionally at the pointy end of new sales data, has forced Ford and Holden to both announce the end to vehicle manufacturing in Australia. The end of the Falcon and Commodore Ute in 2016.

As a nation, we may well want to summon a legend like Skippy – quick go tell Jerry to bring the helicopter, we need to save the Aussie Ute. But that’s not going to happen. Sadly it’s too late.

In the very near future the Aussie Ute will be gone.

Gone, but not forgotten.