Campbell Smith has always been fascinated by the line shaft driven factories that became common in the industrial revolution. But what he has created in a shed outside of Bendigo is one of a kind. Jacob Harris explains.

When we think back to our favourite childhood holidays, most of us conjure pleasant memories of trips
to the beach, foreign cities, camp fires and family gatherings. But Campbell Smith’s fondest holiday memories are of touring factories with his dad.

“Dad’s idea of an annual holiday was to go and look through a factory. We lived down on the Victorian south coast and we’d go to Ballarat, Melbourne, Geelong and Bendigo. We’d look through factories and take photographs. He was a mechanical nut and I’ve inherited a lot of that,” Campbell says.

“It probably wouldn’t appeal to everyone but I absolutely loved it. Back in those days a single steam or diesel engine had to drive everything in the factory and reticulate the power right around the premises (which might have been 10 acres or more). You had all this line shafting up in the roof with belts, pulleys, shafts, bearings, gears, sprockets and chains right throughout the factory. I was mesmerised as a kid to see it all working. I’d stand there hypnotised, following the power chain, thinking ‘that drives that and that drives that…’ It’ leaves most people cold when I start to wax eloquent about it but it just gets me buzzing with enthusiasm!”

Campbell doesn’t have to tell me how enthusiastic he feels about old fashioned factories and the mechanics that underpinned their operation – it’s quite obvious. So it’s not surprising these childhood sojourns to Victoria’s industrial hubs spawned a lifelong obsession with applied mechanics and eventually led Campbell to combine this with his other great passion – the English language – to build the tourist attraction he has named ‘Confectionery Capers’.

What Campbell has created in a large, though unassuming, shed on the side of the McIvor highway, about 10km outside of Bendigo, Victoria, is truly extraordinary. Driven by a single 3hp electric motor, hundreds of toys attached to a complex network of belts and pulleys are sent whirring, spinning and oscillating through the building like a heaving ocean of colour and movement. In the midst of this hurly-burly, lie countless handmade wooden machines – all adorned with chocolate bars, lollypops and the like – designed to demonstrate the principals of applied mechanics while challenging visitors to think about language a little differently.

“I’ve recreated the ambiance of an old fashioned factory here to connect with youngsters in a fun way and to show them what it was like. This place is about three things really: challenging people to think; the magic of the wheel and simple applied mechanics; and about the mysteries and charm of the English language. It’s not about lollies – the ‘confectionery’ part is a misnomer. So while the place is fairly whimsical and quirky it does have some serious messages,” Campbell explains.

Before Campbell set up Confectionery Capers in 1994, he did a business course at TAFE “just to bone up on the principles.” While there, he was told that his original concept – involving only language and mechanics – sounded good but that he wouldn’t sell “wheels and words”.

“They told me I’d have to marry the idea with a product that’s marketable and it just happens that confectionery is colourful and appropriate to have on little display machines that are demonstrating various mechanical drives and all that sort of thing. To be quite honest the lolly part doesn’t interest me that much at all. It’s purely a marketing strategy to tie it all together so I can present the place to the world as Confectionery Capers. I’m more interested in the capers than I am in the confectionery.”

When Campbell decided to end a lengthy career as an English teacher and take early retirement to pursue what was at best a fairly risky endeavour, his wife (and pretty much everyone else close to him) thought he was mad.

“It was a gamble, I admit that. It was a pretty risky enterprise because it initially cost me about $100,000 for all the machinery and the building. I invested pretty much all of my superannuation payout in it.

“It’s not the most lucrative business either! It could be, if it was in a tourist precinct and advertised properly but I don’t advertise. As it stands, the customer throughput satisfies my needs. If it was 50 years ago and I was trying to support my wife and family again it would be a different matter but the business is putting a few bucks in the bank and maintaining itself financially and that’s all I want,” Campbell says.

Confectionery Capers was originally set up exclusively for school excursions – a part time retirement project – and for many years that’s all it was. Then in the late 90s Campbell started to get interest from probus groups, seniors and tourists so in 2002 he opened it up full time to the public. Since then, Campbell has manned the fort seven days a week, pretty much all year round.

“Sometimes in the middle of the year I take a couple of weeks off so it’s closed then – it’s a one man show you see. I’m not quite as frenetic as I used to be when I opened in 1994, I’ve slowed down a little bit. But I still don’t know what happened to retirement. I’ve got no idea,” Campbell laughs.

Everything here works on the basis of practical application. If kids want to know the difference between torque and horsepower, Campbell’s got a machine that demonstrates it. He doesn’t go into technical jargon, he actually demonstrates the mechanical principles. If customers want to learn about ratios with pulleys and belts he’s got little machines they can operate to demonstrate that too. 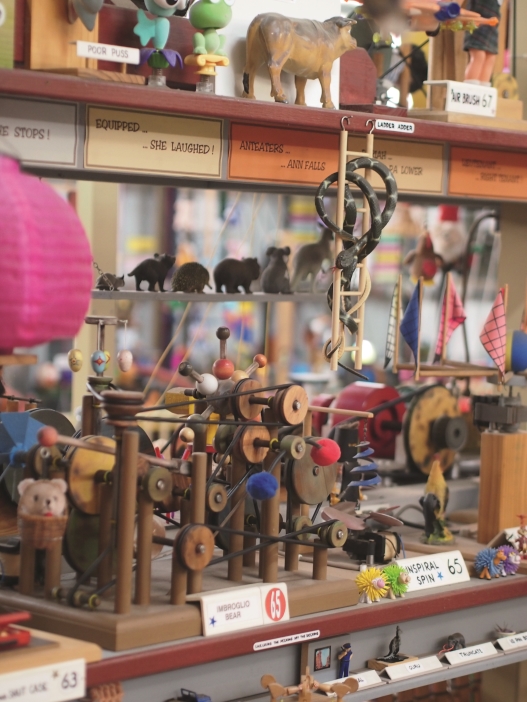 While Confectionery Capers has been running as a business for 22 years, the collection of oddments and machines that has gone into building it have been amassed over a lifetime. According to Campbell, he’s always been a collector and a tinkerer – always had mechanics on the brain. Even in his years as an English teacher, he used to teach applied mechanics that wasn’t on the curriculum!

When you stand in Confectionery Capers and take in the sheer complexity of the place, Campbell’s love of machines – his appreciation for the fact that a machine is more than the sum of its parts – is plainly evident. But Campbell even takes it one step further; to him a machine is a thing of beauty.

“To me making a little machine is artwork. It’s creating a pleasing mechanical application that looks good on the eyes, is colourful and obeys basic mechanical principles. I reckon that’s as much art as it is mechanics – a combination of both.

“When I build all these little machines I don’t design them on a computer or sketch out elaborate drawings, I just get an idea and go up into the workshop and fiddle around until I get something approaching the original concept. I call it the suck it and see approach: fiddle with it, experiment, change, modify or whatever.”

It would seem it’s this natural affinity for mechanics that has allowed Campbell to build and maintain such an elaborate spectacle. He’s in tune with the rhythm of the place and if there’s a squeak or sound that shouldn’t be there, Campbell can hear it.

“There’s a lot of ambient noise here but I still know if there’s a noise I shouldn’t be hearing. When that happens I have to find it fast because if certain things break, the whole place can tangle up in a mighty mess. Believe me; we’ve had a few disasters! I’ve learned where most of the weak spots are and I’ve ironed them out over the years but in the world of applied mechanics you can never be 100% sure.”