Trending
You are at:Home»Cool stuff»Accessories»Mr Monopoly gets a mo for Movember

It’s not often you can convince an 85-year-old to completely overhaul their look, but for the iconic MR MONOPOLY character, 2020 is a year of change.

Five celebrated Aussie street artists have been given the unique opportunity to reimagine the MR MONOPOLY character for the first time ever in the game’s 85-year history, in support of men’s health charity Movember.

The project sees the MR MONOPOLY character come to life in the artist’s signature styles across a variety of mediums, from stencil art to acrylic and spray paint, with inspiration for the new moustache taken from Australiana suburbia and the natural world, through to pop culture icons such as Salvador Dali and Forrest Gump.

Tom Gerrard said while life hadn’t changed too much for him during COVID, he knew it had been tough on a lot of people around the country.

“I’ve been exploring new techniques during COVID times, fusing styles together,” he said. “Working on this project with Movember has been really rewarding for me. I know a lot of men that have lost their jobs, their world has been turned upside down overnight and they are really struggling.

“People have been doing it hard and this has really been an opportunity for me as an artist to create and give back.” 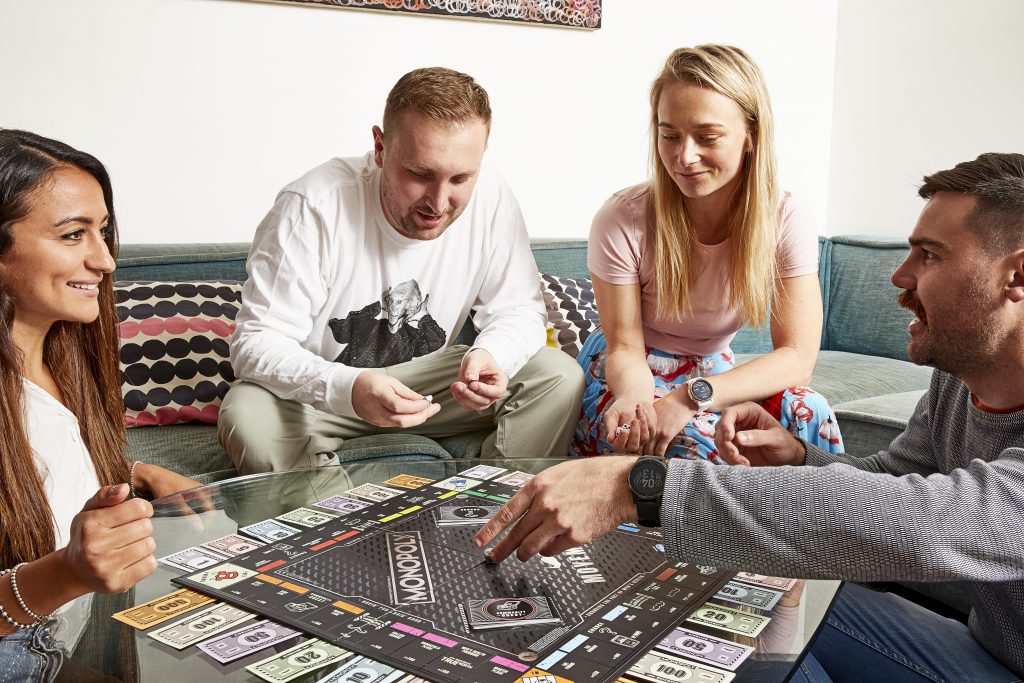 Mike Makka said that while he was focused on the character of MR MONOPOLY, the moustache had taken on a life of its own.

“I went with foliage, greenery, twigs, florals and a butterfly or two, just growing and falling apart in the moustache,” he said. “I wanted to get involved with this project, as it’s pretty typical of Australian men, if not of those globally, to think that it’s not manly to ask for help or to talk about depression or to be showing weakness, Movember allows people to open up and bring mental health into general conversation, which is so important.”

The auction will open on Thursday October 29, with bids taken up until Saturday November 14 via movember.com/theartofmoustachery. Reserve prices start at $1,000.

Movember Co-founder and Global Brand & Creative Director, Travis Garone has also contributed a one-off artwork for auction, using black ink and acrylic on canvas in a reimagining that brings Mr Monopoly into the modern age.

“I’m excited and honoured to have my art hanging alongside the work of such a talented crew of the country’s top street artists. These guys have gone above and beyond in creating these pieces for Movember, and they really do represent the chance to own a piece of Australian history,” he said.

The MONOPOLY partnership also aims to raise $150,000 for the men’s health charity, with a special Movember MONOPOLY Edition hitting the shelves at BIG W on 29th October. $5 from every game purchased will go to Movember.

In addition, BIG W will also stock a new limited-edition Movember Top Trumps card game (RRP $14.99) in a premium cassette-style case from 29 October. Featuring 30 of the most famous moustaches from around the globe – including Frida Kahlo, Freddie Mercury, Taika Waititi and Australia’s own Merv Hughes, $2 from every Top Trumps game purchased will go to Movember.

Movember Country Director Rachel Carr said it was exciting to bring a hairy twist to two classic and much-loved games in support of men’s health.

“We’ve been wanting to work with the MONOPOLY brand for a really long time. And during the course of this year, it’s been amazing to see games like MONOPOLY and Top Trumps play an important role in bringing people together and strengthening (and sometimes testing!) the bonds of family and friendship.

“With the new Movember MONOPOLY Edition you can now have fun, doin’ good. Rather than hotels, you accumulate moustaches. Utilities are now barbershops, and when it comes to chance, perhaps your employer dollar-matched your fundraising total, your moustache was voted best in the office or you’re rewarded for catching up with a mate to check in.”

Now in its 17th year in the Australia, Movember has grown from 30 moustaches to six million, and helped fund 1,250 innovative men’s health projects across 20 countries. Last year alone, almost 100,000 Mo Bros and Mo Sisters in Australia registered to raise funds and awareness, collectively growing an estimated 618km of moustache hair.

“The MR MONOPOLY character’s own moustache provides a vital visual link between our two brands. We are so excited to bring this meaningful collaboration with Movember to life in the MONOPOLY brand’s 85th Anniversary year, and proud to support men’s health during a particularly tough year. We are determined to reach our $150,000 fundraising goal through selling the exclusive Movember MONOPOLY Edition at BIG W – we hope to bring families and friends all over the country together to enjoy the game and drive awareness for this great cause,” said Hasbro’s Tom Munro, Hasbro Pacific Brand Manager.

The board features iconic Australian locations entwined with Movember’s history, from Melbourne’s Gypsy Bar – where Movember was first founded over a pint in 2003 – to Hobart’s Salamanca Place, The Gabba in Brisbane, Perth’s Scarborough Beach, Port Macquarie’s Lighthouse Beach and Sydney’s Metro Theatre.

The new Movember MONOPOLY Edition is suitable for 2-8 players aged 8 years and up and will be available from 29th October for RRP $69.99, exclusive to BIG W.