Trending
You are at:Home»Hobbies»Boating»Casting a long line

Sure, sometimes casting a line is more about taking the time to catch your own thoughts than hooking marine life; just as golf can still be fun when the sun is beaming down and you’re leisurely strolling through the rough looking for your ball … again.

There are times though, when you just want to garner something tasty to throw on the barbie for dinner, and you want that sweet taste of success that just doesn’t come with a store-bought fish.

That’s why many anglers are turning to kontiki fishing – it provides a way of getting multiple hooks further out to sea than you can with a rod, and it takes out the disappointment of missing those bites and fretting about the ones that got away.

Originally, kontiki fishing involved a tiny sail boat which would use offshore wind to take the line out to sea, but nowadays, the technology has advanced, and kontikis have transformed into much more complex machines with onboard motors and clever electronics. This allows them to travel out in almost any conditions, regardless of wind, swell and side currents.

One company, Seahorse, has even implemented GPS-controlled autopilot with incorporated compass technology to make sure its kontiki unit stays on path, even if it gets knocked around by the surf. 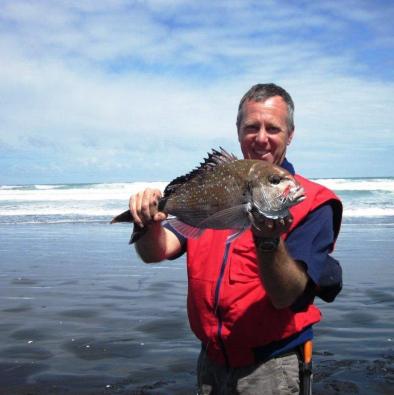 This device, the aptly named Seahorse Kontiki, can carry a line up to 2km offshore – all you need to do is attach your bait and hooks at intervals (the amount of hooks you can connect is determined by local regulations). Then, you simply point the kontiki where you want it to go, set the course, send it out to sea, and let it do the hard work while you sit back and relax on the beach, or enjoy a hit of cricket with the kids.

Further, because the Seahorse Kontiki comes with either a 30 or 46lb Mercury thrust motor, it is packed with some serious power, allowing it to smash through big surf and rips, regardless of onshore or offshore winds. This means that you can fish in spots you wouldn’t ordinarily be able to reach with a boat or target with your rod.

Seahorse owner and keen fisherman Phil Scherer says that although using a kontiki can make fishing easier, it doesn’t take any fun out of the sport whatsoever. What’s more, it makes the pastime more accessible to people who can’t, or won’t, ordinarily pick up a rod.

“Originally we were mainly selling to surfcasters who wanted to get their baits out further than they could when surfcasting, but now we’re finding that there’s a whole range of people from young professionals to families and older couples looking for ways to fish and spend some time together. People are finding that socially, this is a very enjoyable way to spend an afternoon,” Phil explains.

“Also, there are many retirees who have now sold the boat they previously used. They still enjoy fishing, but it’s not as easy for them to drag the boat out anymore. A lot of guys have found that they can head down to the beach, send a Kontiki unit out, catch their fish, pull them back in and go home. It’s nice, easy and successful.”

The whole kontiki craze has been an activity almost unique to New Zealand since the 1930s, but now, with the streamlining of technology, people around the world are starting to see the benefit.

“We’ve set the system up so it’s essentially a point-and-shoot operation,” Phil says.

“With a combination of compass and GPS technology, the Kontiki works out a waypoint 3km out in front of it which becomes its intended target. It then aims for that target wherever you launch it from.

“We primarily implemented the GPS because if you’re on a busy beach with other Kontiki users, you don’t want to end up with a tangle – you need to be accurate with where you send it. A unit without GPS will be precise on a calm day, but on a rough day it can get knocked sideways and lose its path.”

However, Phil explains that using a Seahorse Kontiki without GPS can be a skill in itself, and once you get the knack, you can be incredibly accurate with your launches.

“There are several design features which help the vessel travel straight. We have a small adjustable rudder which aids the direction,” Phil says.

“You stand on the beach, study the water and work out where the current is going. It is usually travelling in the direction of the wind, but when you’ve fished in a certain spot a few times, you’ll realise that certain beaches have their set currents.

“Then you launch the Kontiki in at an angle and it will track out through the current like a rowing boat going across a river.”

While the unit is swimming out, that’s when you attach your pre-baited hooks. Then, it’s just a matter of waiting – this can be anywhere from 10 minutes to an hour, depending on where you’re fishing.

“This technique is quite similar to the one commercial fishermen use,” Phil says.

“The fun part is when you retrieve your line and you see what you’ve caught. As you reel your line back in, you remove your fish off if you’re lucky, or your traces off if you’re not so lucky.”

Phil adds that you’re not limited to the fish you can catch with a kontiki – the ocean really is the limit.

“In New Zealand, especially in the north island, the main fish you catch are snapper, gurnard and kahawai. The further south you move, the more you get elephant fish and various forms of shark. But it doesn’t stop there – we have also caught kingfish, skate, stingrays and even a few puffer fish,” he says.

“Also, the sizes vary – they’re usually a good size for a frying pan, but they can reach record-sized lengths. We’ve had a lot of snapper caught that is over 13kg, and there are even stories of some fairly large sharks being dragged in as well.”

However, just like traditional fishing methods, kontiki fishing is not always a walk in the park – it takes knowledge and timing to maximise your chances of reeling in a catch of the day.

“You need to get hold of some fresh, good quality bait and make sure it’s attached to sharp hooks,” Phil advises.

“Also, as you use the system more often, you’ll find that some spots along the beach are better than others. It’s always worthwhile talking to other kontiki fishermen out there to find out where they have found success so you can target those areas.”