Ian Kenins catches up with a tinkerer whose passion for old pedal cars has seen him collect and restore them for over 30 years.

Brian Dixon’s man space is a little boy’s dream, for in it there are over 80 immaculately restored vintage pedal cars. There are also trikes and scooters, and even a merry-go-round for toddlers with pedal cars instead of ponies. 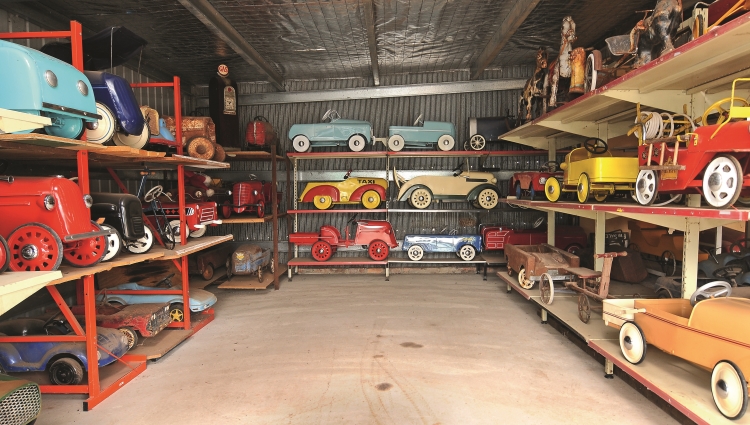 So you’d guess from all this kid’s stuff that Brian is re-living his own childhood days but “no,” he says jokingly. “My older brothers had one between them, but I was a deprived child.”

Pedal cars, made mostly of sheet metal, date back to the early 1900s. The earliest models in Australia were imported from England before the Cyclops company began manufacturing them here in 1917. Costing almost a week’s wages back then, they were an expensive gift to lavish on any child.

Today they’re an expensive hobby mostly grown men lavish on themselves. At the time of writing, an original 1957 Austin J40 was on offer in a NSW shop for $8500. Vintage models often fetch up to a few thousand dollars, depending on condition, while the more common garden variety (which is where many are left to rust) sell for a few hundred dollars.

There are also pedal car websites and pedal car clubs around the country, which do a brisk trade in hard-to-get parts. Last October the tiny Victorian township of Coleraine hosted the Australian Pedal Car Grand Prix in the town’s main street.

It wasn’t until the late 1970s when Brian obtained his first pedal car, an old Clipper a farmer had destined for the tip. “I thought I would do it up if Sue (his wife) and I had another son.” But the Dixon’s last born also had a pedal car-deprived childhood. “I didn’t touch it for a long time because it had a lot of parts missing,” says Brian. “So by the time I got around to finishing it he was too old.” 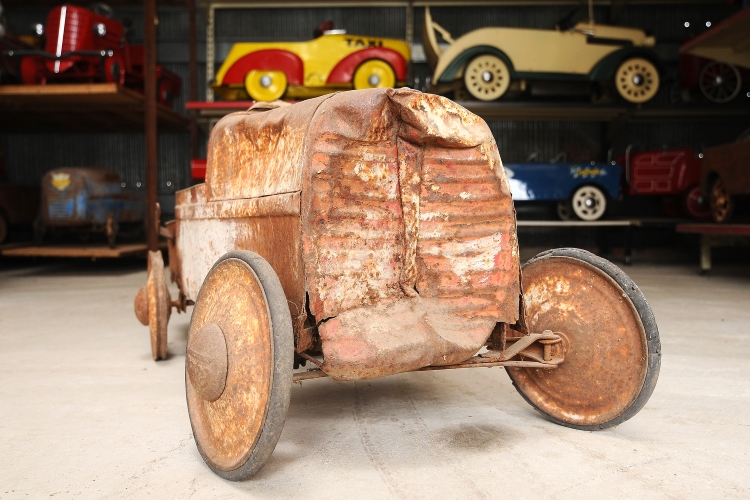 However, the Dixon’s grandchildren have been the beneficiaries of Brian’s hobby; although his wife thinks it’s more than just a hobby.

“She keeps telling me I should take a bed into the shed.”

Brian says he sometimes will spend all weekend working on a car but then not touch it for another three or four weeks, and a complete restoration can take him between one to three months.

“I never played football so winter time was a chance to poke around in the shed.”

Brian built his sizeable brick shed himself while professional builders were constructing his house. As the pedal car collection grew he needed additional space, so Brian disassembled an old farm shed and put that up next to the work shed. It was cheap but it did come at a price.

“This is from an out-of-control electric saw,” he says, giving me a thumbs-up, minus his right thumb. “It didn’t hurt.”

As immaculate as Brian’s restored cars look, he admits to being no great handyman, although the stock agent has always been a shrewd businessman. “As a kid I used to buy second-hand bikes, do them up, put new transfers on and sell them around Christmas.” 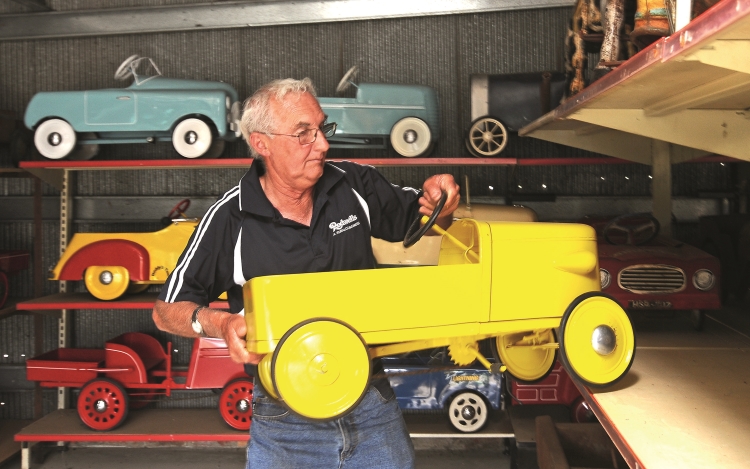 He learned some basic skills from his handyman father but has relied on trial and error and basic tools such as a MIG welder, a compressor, a spray gun and an English wheel to shape bonnets. He also uses fibreglass and plenty of putty and paint.

“Restoring them is more panel beating,” says Brian. “Which I’m not real good at, but I am improving.”

He says cars made from a better gauge of steel are easier to panel beat than those from a lighter gauge, which are difficult to handle. Until recently Brian used to use a hammer and dolly for panel beating but a local panel beater is about to provide him some lessons in using a slapper- a flat, heavy file-like tool.

As a stock agent travelling around rural Victoria, Brian regularly meets cockies on their patch of dirt, but the conversation never begins with business. “My standard question when I go on a farm is ‘You wouldn’t have any pedal cars lying around?’” 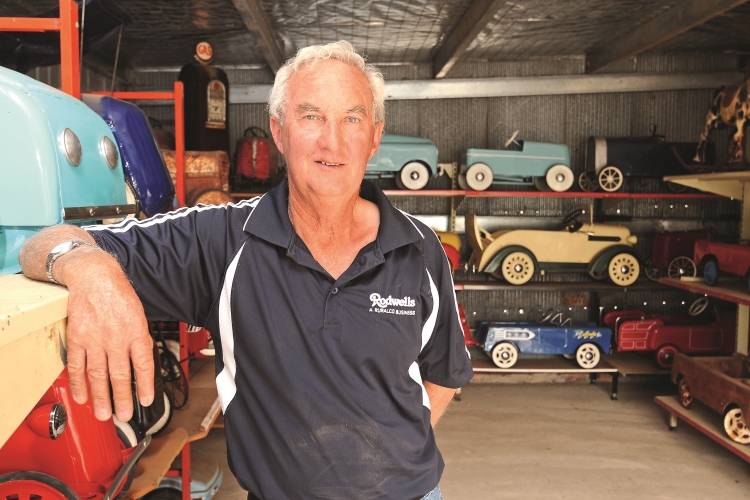 He also keeps an ear open for any local chat about someone who knows someone who’s got an old model gathering dust, and when he learns of something unique, like the pedal car merry-go-round, he seldom gives up. “A lady had it on a farm in Stuart Mill and I pestered her for about 15 years,” says Brian.

Most of his collection has come from within the central Victorian region, and often for free. “I was up at Nullawil, which is on the other side of Wycheproof, doing a job,” says Brian. “And the guy said ‘Come with me.’ We crawled under a tree with a canopy bigger than this shed and there was his old car from when he was a kid. I offered him a fair price and took a photo of him standing beside it and then (later) one of it done up. He sent me one of him in it when he was a kid and I put them all in a frame and sent it to him.”

Brian will accept or buy a car in almost any decrepit condition as long as it has a reasonable chassis. “You can buy most replacement parts and panels, but you can’t buy new grills,” says Brian. For other parts he goes to major swap meets, and has contacts he trades with in Queensland, Adelaide and Wagga Wagga.

coat. He has a copy of Cyclops Toys Through the Years which details the history of each model, but admits he’s “not much of a reader.” Nor is he the type to keep his collection in showroom condition. “They get covered in dirt and dust but that’s okay. I won’t spend every day polishing them.”

However, that attitude might have to change. For much of the past 30 years Brian’s collection has been for his interest and his grandkids’ enjoyment. But 12 months ago the local paper in his hometown of St Arnaud wrote a story about his restoration achievements and since then a few car clubs have turned up on Brian’s doorstep. “Parked all out the front and came in for a couple of hours,” he says, matter-of-factly.