To say the RV Pax has had a colourful history is putting it lightly. From minesweeping, gun running and drug smuggling; the ship has had a multitude of purposes over the years, but few have been as honourable as its current function. Zach Broadhurst explains.

After 32 years in the fire service, as well as being a Vietnam and Malayan veteran, Norm Whitburn had some well earned retirement time to kill. Most men at this stage in life take up hobbies and re-connect with old passions, but few take on a challenge as tall as a 150ft ship.

When Norm Whitburn’s wife was watching TV one Easter Sunday, she came across a story on the news that would change both their lives forever. A man was looking to donate a ship to a worthy cause and she thought they were the perfect people to take it over.

“I asked, ‘What are we going to do with a ship?’, because a ship is a very expensive item to keep, maintain and do up,” Norm recalls. 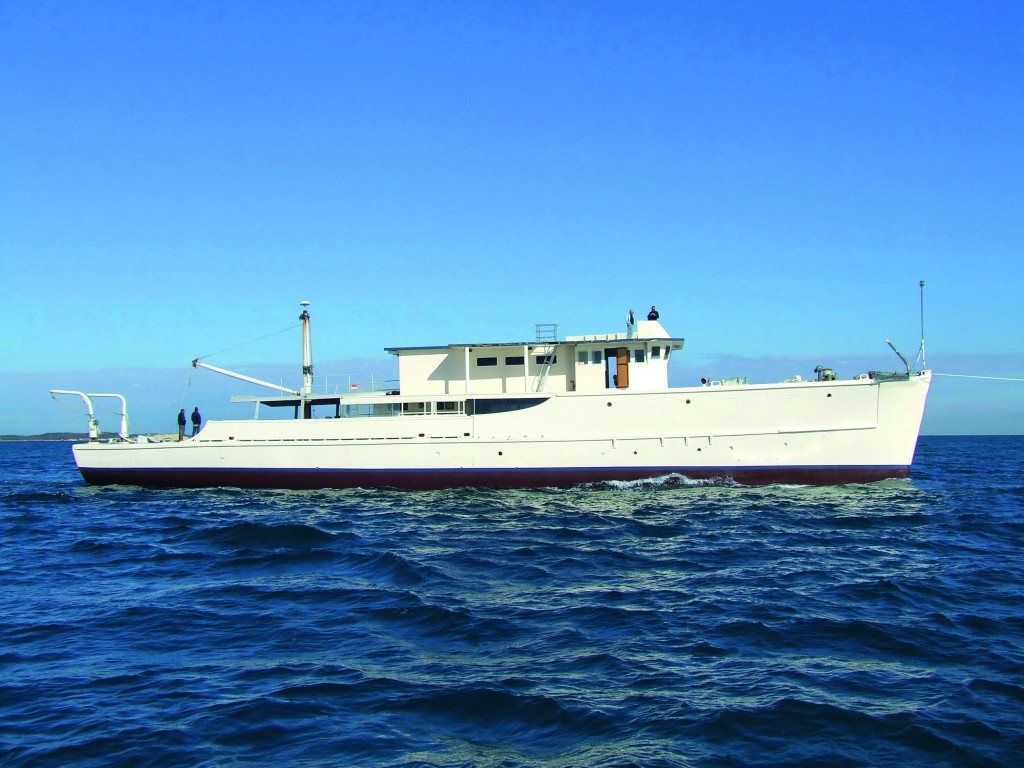 But after a few minutes of contemplation, Norm decided the ship could be the perfect way to help servicemen and women deal with the baggage left over from their time as soldiers, fire fighters, policemen and paramedics.

“I’m really into helping veterans come back into their normal life after operational experiences. It’s a good respite, because we can get them on the ship, sit them down and talk to them,” says Norm.

What Norm didn’t expect was the baggage the ship would carry. Originally commissioned by the US Navy in 1954 to patrol the world’s conflict zones, before being given to the Dutch Navy 20-years later, its own retirement years have been even busier than Norms.

Decommissioned and left in a scrap yard, it was purchased in 1977 by Indian Prince Mukarram Jah, the Nizam of Hyderabad, who converted her into a luxury motor yacht.

There are many tales of the Prince’s extravagance and criminal activities and Norm highlights a few.

“The ship was done for drug smuggling, gun running and diamond running. It was implicated in the Mickelberg Gold Swindle too.”

Eventually the Prince’s funds ran dry and he began to owe money. The ship was seized in 1991 by the Western Australian Sherriff’s office in satisfaction of an outstanding debt in dispute – he now lives as a recluse in Turkey.

The ship was then sold to millionaire Jay Harman – inventor of a valve to go into people’s hearts to improve their circulation – who used the ship for maritime research.

In 2012 he finally had no use for the ship and was seeking to donate it to a worthy cause. Norm’s idea to allow veterans to restore the ship, while also helping them deal with past traumas was the perfect fit for the former Navy vessel. 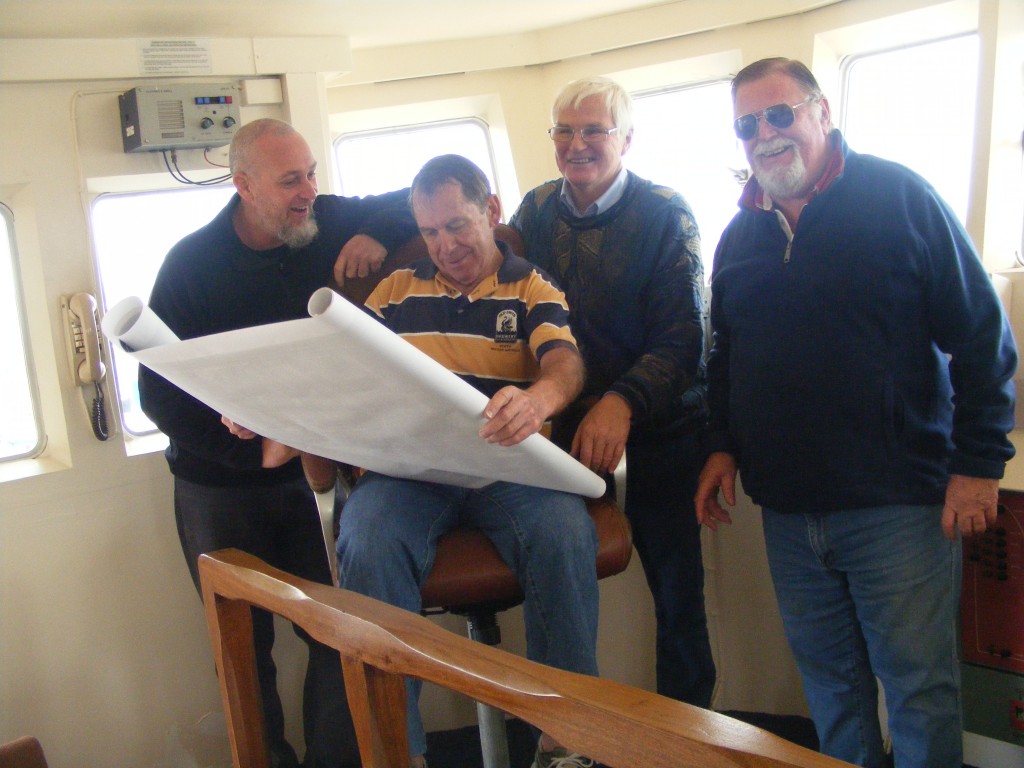 “It is so important, yet no one in the world had thought of such a respite,” Norm explains.

“When these veterans come back from their operation experiences with post-traumatic stress, the last thing they want to do is sit in some psychologist’s office and talk about what they did.

“They just can’t open up as much as they can if they sit on board that ship, with people who understand what’s happened and there they can open up at their leisure. It could be sitting and doing nothing, it could be painting the ship, or helping restore it. At the end of the day, the ship is a tool to get these guys back on track.”

Labelling it Project Pax, Norm and the other veterans have been working hard to restore the ship to as near as original condition as possible, and hope to soon get it back out on open water.

“It was launched in 1956 and we plan to get it back, as closely as possible, to its original condition,” Norm says.

“We have a condition report on the ship from a surveyor and it’s probably 60% at this time – which is pretty good. What that tells us is the build and the plans are okay, because it doesn’t take on water.

“All the planking and the ribbing is in very good condition for its age and we’ve done a lot of work inside, particularly in some of the cabins.”

Assisting returning soldiers to transition back into civilian life is something the government hasn’t always handled well, but Norm is pleased they are accepting of that and helping with Project Pax anyway they can.

“I started this project because the government hadn’t even thought of how people with post-traumamatic stress can be fixed up. Now they are doing very well, particularly the department of veteran affairs. We have the ship berthed at a government facility down at Henderson in Perth, and they are paying for all the berthing fees,” says Norm.

The government aren’t the only ones getting behind the great cause either, with many people and businesses donating much needed money and equipment.
“Ostril ships – who build war ships –  are giving us a hand and AME, which is a marine engineering organisation, have a set of slips that they don’t use which they have offered to us.”

“The Navy are helping as well. They have pledged their support and want to come give us a hand too.

“I’m quite adamant that the veterans deserve help from people in big business, because the veterans have given them that freedom to go into business for themselves.”

Despite wanting to restore the ship to as close as original condition as possible, it will also have some modern day technology aboard – those of which have also been donated. 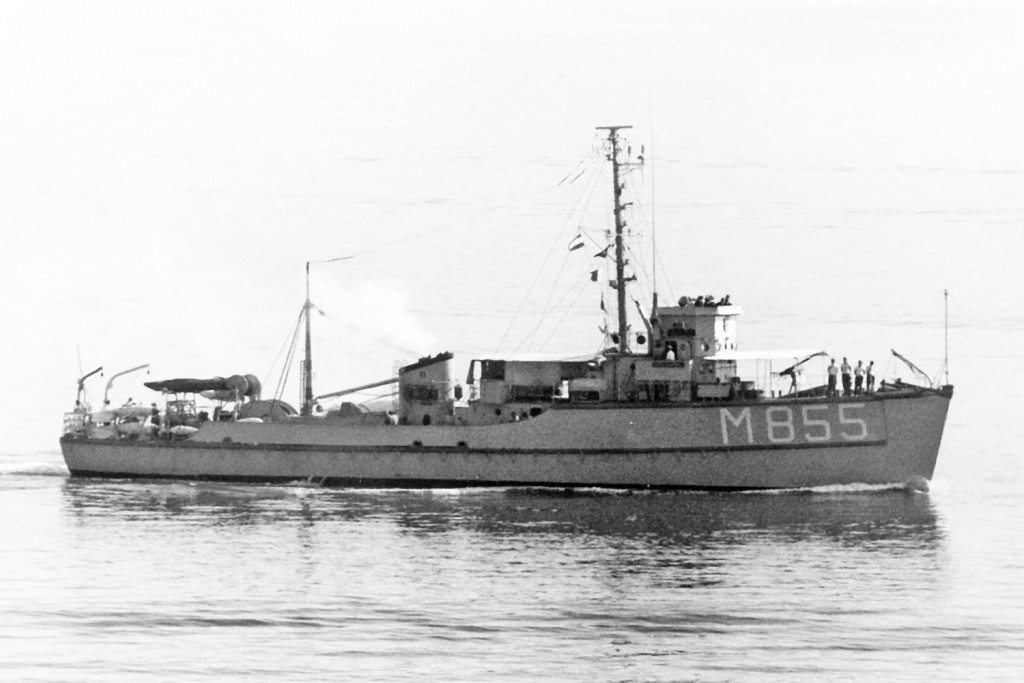 “We have approached Kailis for some no longer needed GPS, radar and echo sounders from their fishing fleet, as they renew their gear once a year. But we will try and keep it as close as we can to the original ship,” he says.

With all this goodwill around, there is always room for more and Norm isn’t against the idea of someone with extra cash helping out this group of well deserving veterans.

“We are hoping the veterans will get it done, but if some nice rich millionaire would come along and see the importance of the ship and helping the veterans, I’d be happy with that,” he says.

“Financial help would be ideal, because the hardest thing to get is money. We’ve got councils who will sponsor us for materials, but we can’t really use people for help, because we are in a high security area. So, money is the best way for people to get involved.”

Once the ship is finally finished it will be used to allow the veterans to get out on the open water and enjoy the fruits of all of their hard work.

“The ship will probably carry about 40 passengers. John Wayne’s ship ‘Wild Goose’ is a smaller sister ship and when he was alive he took up to 104 people out for a few days at a time,” explains Norm.

“We are not running a commercial venture though. The ship is registered as a private vessel. It will be used to take veterans out to sea that need a break from the mainland. We can talk, fish and do whatever we like, because all that is therapy for them. ”

For anyone wishing to donate to Project Pax, please call Norm or his Wife on 0427 444 487. Project Pax has a charitable gift recipient status, making all donations tax deductable.