Trending
You are at:Home»Cool stuff»Tech»Secure your home or man cave with ePOD

Got some fancy kit in the home or man cave that you’d like to protect in case of a fire?

In the event of a fire, would you know exactly where your fire extinguisher or fire blanket is and how to use it?

For at least 75% of Aussies, the answer to that question is no, impacting their ability to bring small problems under control before they become life-threatening issues. 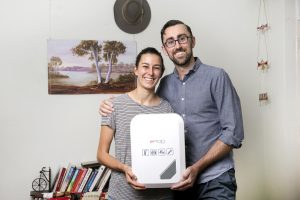 Mikhaila and Euan with their ePOD.

Less than 5% of Australians are educated enough to handle an emergency and 200,000 people are hospitalised with serious burns each year 3 . In light of these alarming statistics, Melbourne-based company, dFENCE, has developed a home emergency kit with the aim of saving lives.

Housed in a compact unit, the dFENCE ePOD contains an Australian made fire extinguisher, fire blanket, torch, first aid kit and a mesh bag for EpiPens, and other personal emergency equipment, so that key response items are on hand when time is critical.

Created by two Melbourne mates after a neighbour’s house caught fire during a family barbecue, the ePOD empowers Australians to become first responders in their own home – potentially saving lives and valuable property.

Co-Founder and General Manager, Sam White, said the product is designed for homes, apartments, cars and even boats.

“Every Australian wants to be prepared, but the fact is, many of us aren’t,” he said. “When my neighbour’s house caught fire, they couldn’t locate their fire extinguisher, so the MFB were called, wasting valuable time.

“In a stressful situation, such as when faced with a fast-moving blaze, the solution needs to be easy and accessible. That’s why we have designed the ePOD to be small enough to mount on the wall, door or in a cupboard, with all the tools at your fingertips.

“Whether you’re a homeowner, renter or landlord, knowing that the right equipment is easily accessible provides peace of mind.”

Ex-Commander of Operations at Metropolitan Fire Brigade (now retired) Jonathon Manders said thousands of people are impacted by fire each year, many of whom are ill-prepared to act effectively when a fire occurs.

“By far the majority of fire-related fatalities and injuries occurring in the urban environment do so, not in places of work or public spaces, but in dwellings. The domestic kitchen is particularly fire prone,” he said.

“Today, with the extended use of synthetics in household fittings and furnishings, once a fire takes hold it can be only a matter of minutes before the room of origin becomes untenable. Hence early intervention is critical in mitigating the damage and threat to life caused by fire in a home.

“Millions of dollars in property loss together with injuries or deaths could potentially be avoided every year if the occupants of a house had ready access to some basic first aid fire-fighting equipment and the knowledge on how to use it effectively,” he said.

More than 50 percent of people who deploy a fire extinguisher during an emergency do so incorrectly or dangerously 4 , so the ePOD comes with a free augmented reality app to train users on how to use its contents. The app also reminds users to replace key items when needed, as seldom do people replace their fire extinguishers after the three-year lifespan.

With Fire Prevention Australia data showing that 95 per cent of all fires could have been extinguished if a fire extinguisher had been applied properly, the ePOD could dramatically reduce injury, death and property loss.

The ePOD is available online at dFENCE.co for $149.95 (postage is free). Replacement items can also be ordered from the website.