Some men dream of recreating legendary feats while others set on a path to achieve such greatness. For some it’s a life-long goal, while for others, it’s a way of keeping occupied during retirement. John Dean introduces us to a Tasmanian who falls into the latter category but in a pretty special way.

It was a dog-eared motoring book from a flea market that first started Richard Edmunds thinking about a project to keep himself busy in retirement. Inside were black and white photographs of a powerful V12, open-wheeled Sunbeam works racer, named Ladybird. 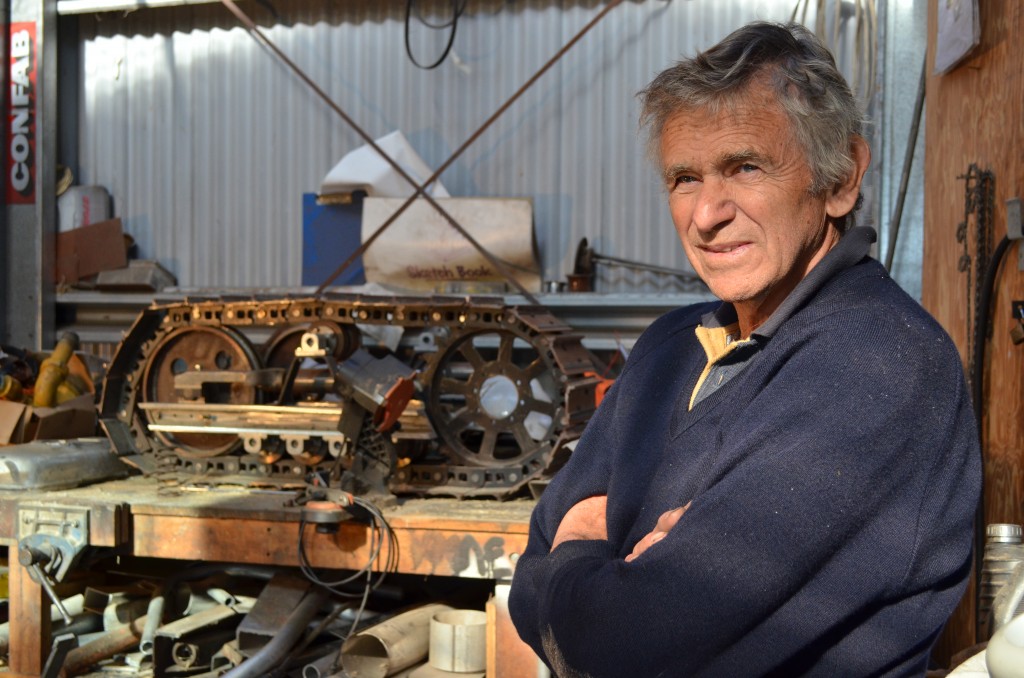 Richard Edmunds needed a hobby to keep him occupied during retirement.

In 1926, this sleek machine took itself and gentleman speed-freak, Major Henry Segrave, to a velocity of 152.33mph along the beach at Southport, England.

The pair had succeeded in setting a new Land Speed Record.

Ladybird was later fitted with twin superchargers and achieved further successes competing in Grand Prix. The Sunbeam continued to receive further modifications throughout its racing career, and was eventually given a new name of Tiger.

Segrave was killed in 1930. His Sunbeam, however, still survives today.

Richard reasoned that scratch building a fully functioning, working replica of the celebrated Sunbeam in 5/8th scale should, by rights, keep him well and truly occupied.

You’d be forgiven for thinking that such a project would require reams of detailed measured drawings to ensure an excellent outcome. In actual fact, there are none. Richard relied on intuition and some rough sketches on scraps of paper. Soon after the component was made, the drawing generally ended up in the wood stove, or was just simply lost.

“Once I had the original car’s wheel base dimensions, I could work out the size of everything else by scaling off photographs,” Richard says.

Check out the intricacies of the Sunbeam’s gears.

In order to keep the vehicle as light as possible, without compromising structural strength, a ladder type chassis was MIG welded together from aluminium rather than steel. The Sunbeam’s body was fashioned from thin alloy sheeting that is easily worked with basic tools and simple wooden formers. The elegant rear flanks required an English wheel to stretch and form some of the compound curves.

“Some people can bend shapes without leaving even a mark,” Richard says.  “I’m not that good; there’s a real art to it. Still – it didn’t turn out too bad in the end.”

Not too bad at all – despite one excruciating incident that came treacherously close to obliterating Richard’s entire project.

“I was working on one of my old Land Rovers in the shed and leaned through over the door to start it, but I hadn’t realised it was in gear. It fired instantly, took off in low range, and then ploughed into the Sunbeam, crushing its tail; bending it completely sideways.

“So that was a bit annoying,” Richard laughs. “Once the disheartening job of repairing the damage was tackled a few days later, it actually straightened out without too much trouble at all.”
The louvers running along the bonnet were pressed out with a stamping tool fashioned from a bit of high tensile steel. Etched primed and rubbed back, Richard was ready to give his creation a cursory coat of gloss enamel.

“It’s more of a pillar-box red, I suppose,” he says, squinting at the paintwork. “I was going to have another go at it – but it’s not too bad really – I’ll probably leave it as it is.” 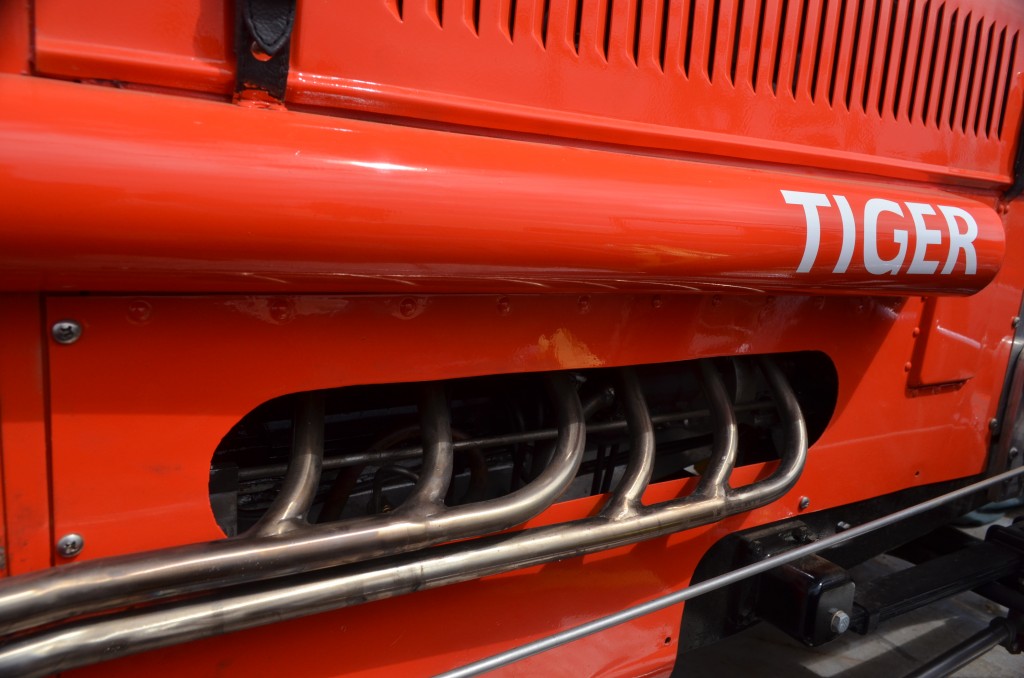 Richard describes the colour as pillar box red – a colour he wasn’t too fond of in the beginning but has grown to admire.

The heart of the little Sunbeam is of course its beautifully engineered V12 motor, and while Richard has had past success in casting large components for other projects, he chose this time to mill the main engine block and cylinder heads from solid billets of aluminium. There is not one, but two distributors, which were also built entirely from scratch. Richard cast even their caps – which feed the 12 small chainsaw-type sparkplugs – in epoxy resin. And then there is the transmission. A dazzling array of gears were painstakingly cut and honed before being assembled into custom-built gearbox and differential housings.

During some early testing, gears kept locking up and snapping off teeth, which repeatedly found their way to the darkest recesses of the 4-speed crash box until Richard was able to sort out the clearances properly once and for all. Problems were not just confined to the transmission alone – one of the two superchargers that Richard had built was running short of breath, with the cause of the persistent problem only being found after he stripped it down again and found that one of the vanes was not quite right.

The 17 inch wire wheels are ‘postie bike’ rims, which were spoked up to fit Richard’s splined hubs and are secured to each corner of the Sunbeam by double eared knock-ons instead of wheel nuts.
March 21 and the little Sunbeam makes its first public appearance on Bellingham beach in Tasmania’s north. Like Segrave before him, Richard is poised to test the limits of his machine over a suitable stretch of sand. In terms of scale, a speed of 92mph would be required to match the record-breaking run made by Ladybird 86 years ago to the day.

It’s a clear morning as friends and family gather to sit with flasks of tea and tins of biscuits on top of the dunes that overlook the sparkling shoreline. In true ‘devil-may- care flying-fool’ style, scant regard has been given to protective clothing – apart from a soft leather aviator’s helmet and a pair of period goggles. 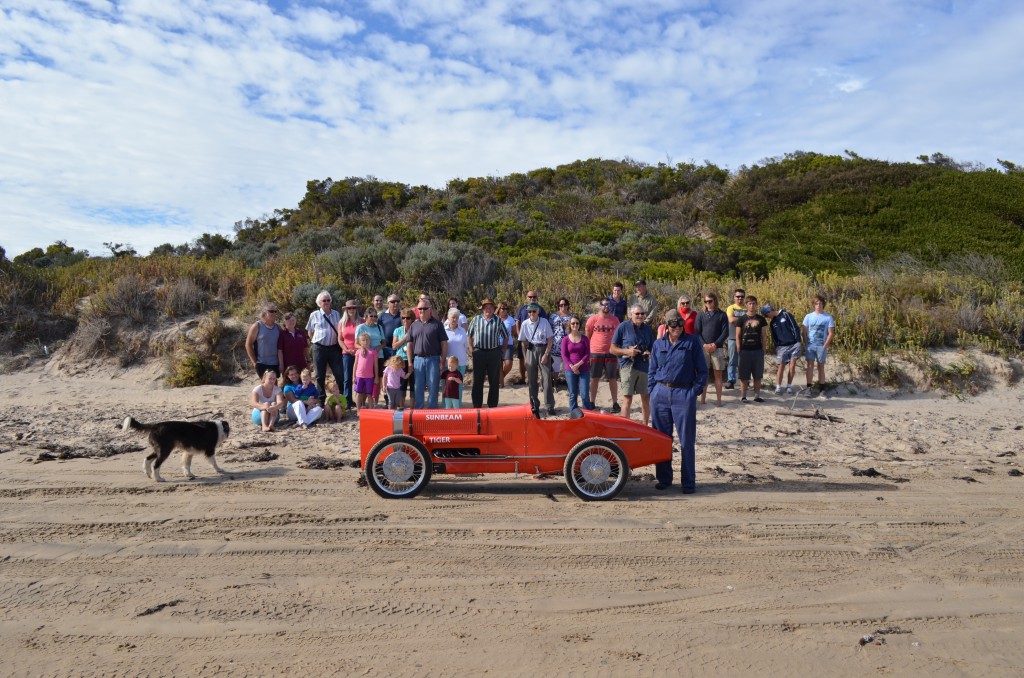 Richard Edmund’s 5/8th Sunbeam replica drew a healthy crowd on its first outing and with its stunning red exterior, it’s easy to see why.

And it’s socks only in the cockpit, as Richard’s signature steel-caps tend to jam themselves up between the pedals and steering column.

With twin puffs of blue, the V12 bursts into life and quickly settles down to a steady idle. Richard blips the accelerator periodically as his machine reaches temperature. The sound is glorious – like short bursts of rasping machine gunfire. He gets away easily and with each run Richard’s confidence in the Sunbeam increases, pushing the little vehicle harder each time.

A cluster of old-school Smiths instruments relays the essentials of water temperature, RPM and oil pressure. There is no speedometer in the Sunbeam, but the Land Rover, driving along side for photographs, reaches 80km/h.

Having completed his last run, Richard pulls back in, grinning like a shot fox.

“I was starting to feel a bit of wheel wobble in the front, so I didn’t want to push it too hard. The other thing holding me back was the sand. It was being thrown up by the front tyres and kept stinging my face harder the faster I went. The clutch was also slipping under load. But that was fast enough.” 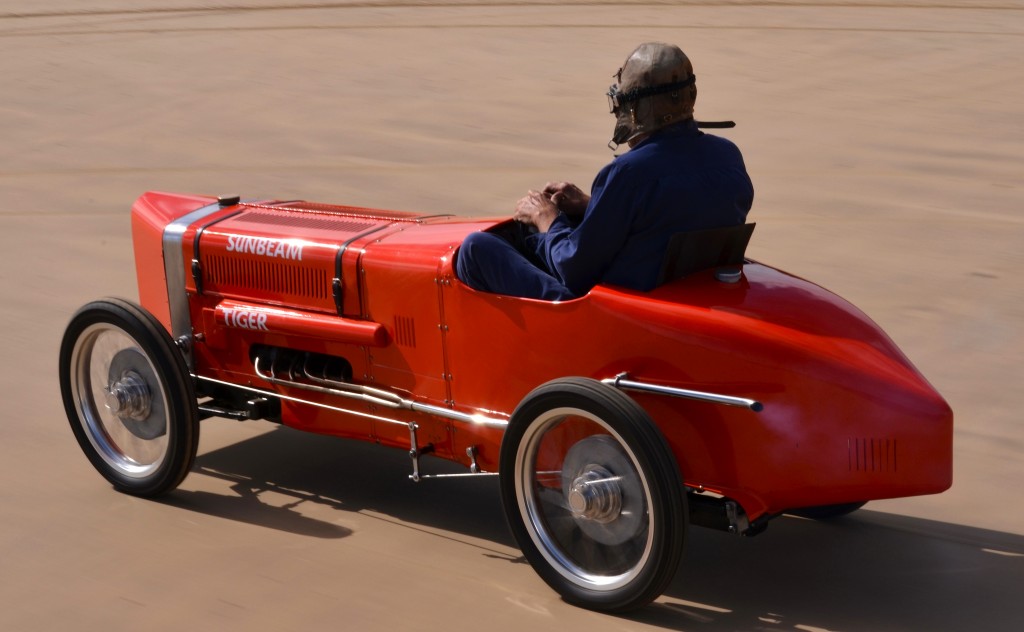 Like Segrave before him, Richard was poised to test the limits of his little Sunbeam over a suitable stretch of sand.

So a highly successful first outing. No records were broken, but then again, neither was the car. And, as an added bonus, Richard is alive and still in one piece.

With the afternoon tide reclaiming the test track, the Sunbeam is lashed back down onto its trailer and dragged up between the dunes by Richard’s Defender 110.

The Sunbeam Tiger is currently housed and on display at the National Automobile Museum of Tasmania in Launceston.

The next 5/8th scaled project already underway in Richard’s shed is a piece of agricultural machinery called a Fowler VF Crawler – a type of tractor on tracks that was first produced in the late 1940s. An old boy down the road has a paddock full of the things.

It should come as no surprise that Richard is now spending inordinate amounts of time trudging about a muddy field with a tape measure, pencil and a few scraps of paper.