Trending
You are at:Home»Hobbies»The Evolution of Billiards

The origin and evolution of billiards has been shrouded in mystery and subject to conjecture. Victor Stein and Paul Rubino have unearthed the roots of this ancient pastime and put it together in an incredible book. They have generously agreed to let ManSpace share some of their amazing findings.

From primeval times to the present day, man has played games with a stick and a ball. Many active sports are based on this system, yet very few have the appeal of the more gentle pursuit of the ‘cloth sports’.

Billiards in its contemporary incarnation is played by several hundred million people around the world. It has been one of the most popular games played by all echelons of society for well over 700 years. If you include the games of snooker and pool, cloth sports have a rare ability to cross all sectors of society – irrespective of income, nationality or religion.

The story of the game’s origin is fascinating not only for billiards aficionados, but for anyone interested in art, history, sport, craftsmanship, collectibles and world culture. 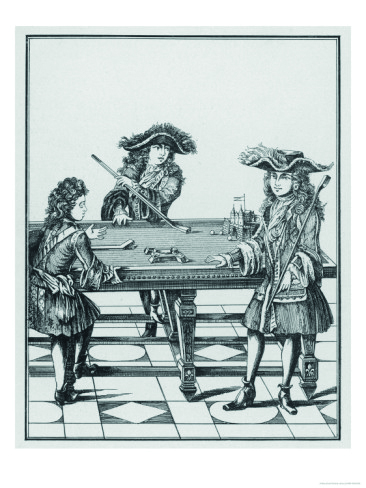 Although the history of bat and ball games can be traced back to ancient times (there are many recorded instances in Ancient Egyptian and Greek civilisations), the most logical period to narrow down the history of billiards specifically is the Renaissance. Beginning in approximately 1100AD, images and descriptions of billiards, whether played on the ground or on a table, began appearing with a lot more frequency.

The period lends itself to extensive research because so much information can be analysed through the many paintings, books, illustrated manuscripts, tapestries, sculptures and other assorted art objects that were prevalent in the time.

How it spread throughout the world is difficult to pinpoint, however various books suggest the Knights Templar played a significant role in bringing it to the Western World.

From a book entitled The Great Industries of the United States, written in 1873 by several authors, the following appears:

“In all probability, however, the game, like that of chess, is of Eastern origin. When the Templars brought it back with them from the Holy Land, it soon became the favourite amusement and means of health to which the cloistered monks of that period were permitted by their superiors to have recourse…”

Even through this period, the game was going through many incarnations – more often than not reflecting the society and location in which it was being played. There are numerous tapestries and drawings that clearly demonstrate games with strong correlation to billiards – however the equipment and manner in which it is being played varies in relation to the class being depicted. 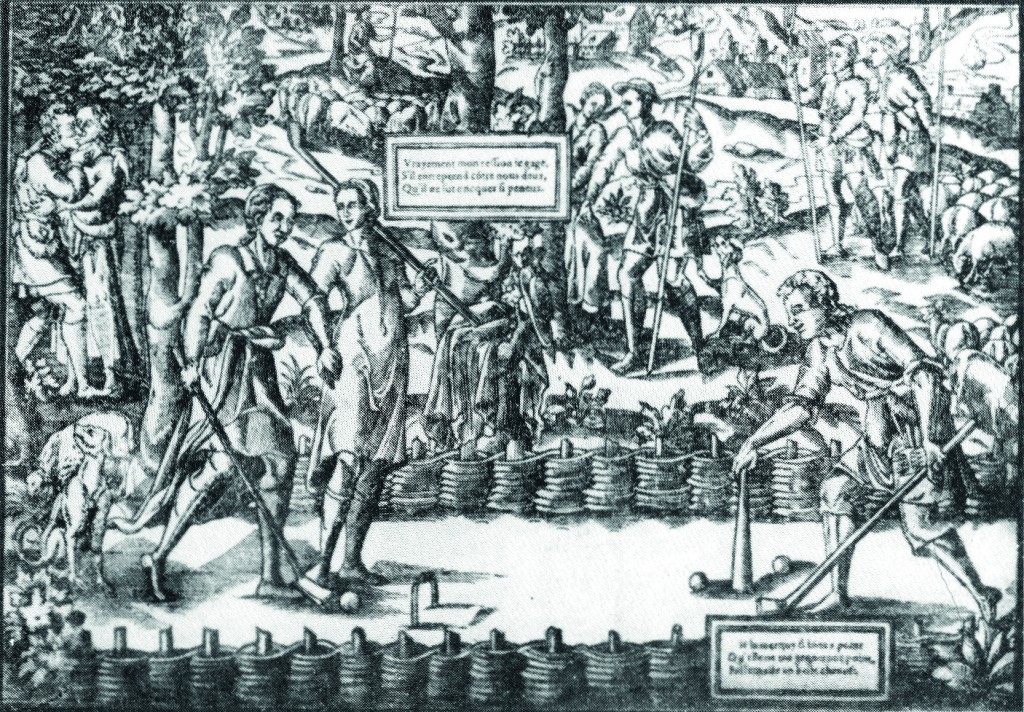 What all people agree on is that billiards evolved from a lawn game much like croquet, but what moved the game indoors is perhaps a little more difficult to ascertain in this short article. There is no doubt however that the green cloth we see on a table today is a direct reflection of its outdoor grass history.

At the time the game was moved indoors, it still had great resemblance to a croquet-style game.

The first balls are believed to be stone, eventually being replaced by wooden ones. Rails were mounted around the edge of the table to prevent the balls from falling off. The balls were shoved around the table by a wooden stick called a mace.

In early billiards history, the game was played with an upright target stick behind a hoop, like the stake in croquet. Eventually the hoop and stick were phased out and pockets were added.

By the end of the 17th century, the balls were generally made from ivory which had largely replaced the wooden balls previously used. An ivory arch, called a ‘port’ was positioned on the table at the pyramid spot and an ivory peg called a ‘king’ on a corresponding spot at the other end of the table. The main purpose of the game was to pot the opponent’s ball and keep your own out of the pocket, which became a ‘hazard’. Additional scores or forfeits associated with passing through the arch or hitting the ‘king’.

European involvement
The word ‘billiards’ is believed to come from either the French terms ‘billart’, which means stick, or ‘bille’ which means ball.
It seems France was the first country in billiards history to embrace the game in a big way. From the French kings down to the lowest commoner, the game spread throughout French society. They enjoyed the competition and considered it a feather in their cap to be good at the game.

Political careers were enhanced by a show of respect for the game and an ability to play it well. This great love of the game soon spread throughout the rest of Europe. Members of the European nobility would engage in billiards tournaments among themselves and would hire skilled players to give lessons to themselves and their children.

Billiards became a fully-fledged sport in Europe and eventually spread through many cities and towns all over the continent. One indication of the historic popularity of billiards across Europe was the publication of The Compleat Gamester, a book of billiard history, rules, and equipment, in 1674 England. In the 1700s the game continued to evolve, especially with the creation of the modern style cue stick.

The cue
In the late 1600s, players began to use the narrow end of the mace for shots along the rail, which were difficult to hit with the larger head section. The handle of the mace was called the ‘queue’. This word is believed to be the origin of the modern term ‘cue’. Eventually the queue evolved into just a straight stick without the larger head of a croquet-type mallet. 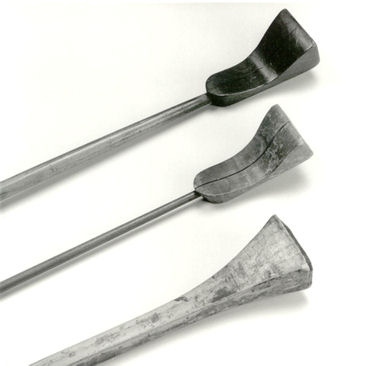 Tip chalk was introduced to allow better control of the cue ball and the leather cue tip was perfected by 1823. The leather tip allowed a player to put spin on the cue ball to affect its handling on the pool table. In billiards history, this cue-spinning ability was introduced to America by the British, which is why side-spin is today called ‘English’.

The table
As mentioned earlier, pool tables evolved as a replacement to the lawn of a croquet game. The first officially recorded billiards table in history belonged to Louis XI of France in 1470. Although billiards tables initially could only be afforded by nobility and the rich, they were becoming common in the bars and public places of France by the 1500s.

At the turn of the 19th century, billiard tables usually had solid wooden beds generally made from oak, about one-inch thick and in three pieces. However, examples of marble and parquet oak beds were also known. The wooden tables were of a much lighter construction than their modern counterparts, having more the appearance of a dining table with slim elegant lines. This was not really surprising as billiard tables at this time were made by cabinet-makers, who used the materials and styles known to them from furniture manufacture.

The cushions were stuffed with various materials, the most common of which was List, a waste product of cotton manufacture. Also used were horse hair, cotton and felt. All these substances produced a hard pad, like the arm of a stuffed chair.

In 1826 John Thurston, an Englishman, invented the slate table bed. This material helped prevent the warping that wooden beds were prone to. In 1845 Thurston was granted a patent for pool table cushions that were made from rubber, cork and leather. 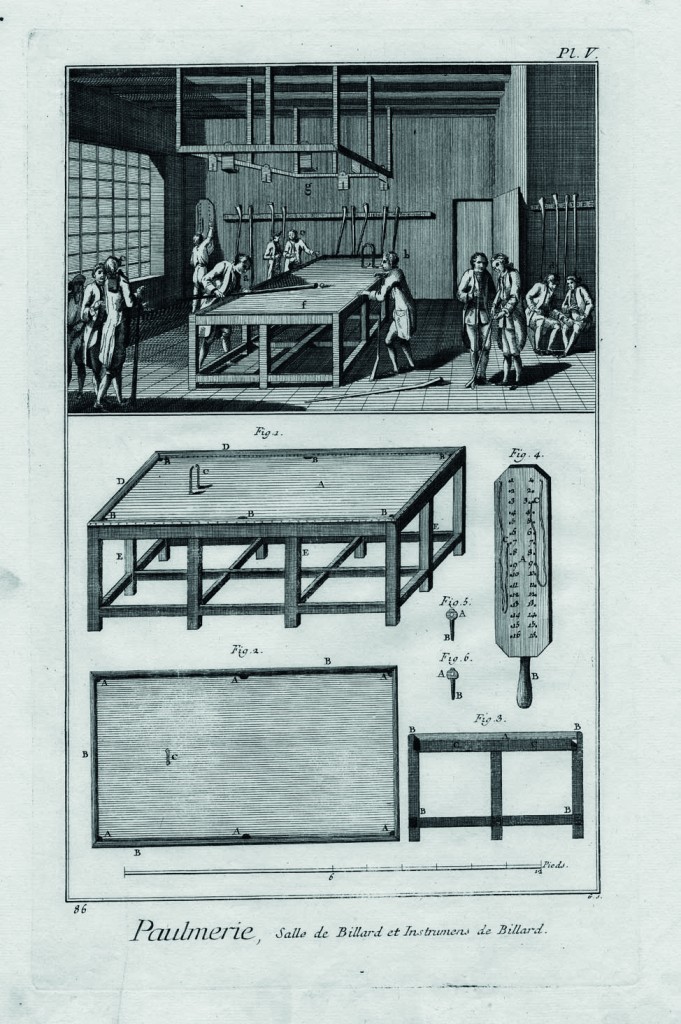 The balls
The earliest balls in billiards history were believed to be the stone ones that were used for the croquet-type ancestor of billiards. These gave way to wood as the material of choice. In the 1600s, elephant ivory was used because of its glossy appearance and good looks.

By 1800, ivory balls would be the only type of ball used for English championship matches. The best balls were made from African ivory which was considered to be of more even density than Indian ivory. Inconsistent density meant that a weight difference could occur even between a set of balls cut from the same tusk. This was considered so significant that balls were usually weighed before the start of an important match; this criteria being more important than the size, which could therefore vary within a ‘matched’ set of balls.

As with any tooth, the elephant tusk has a nerve which runs through its centre. This resulted in a hole which could be quite significant in balls cut from near the base of a tusk. Because of this, only the small tusks of female elephants were considered suitable. Holes created by the nerve would usually be plugged with ebony and become the ‘spot’. Due to the general inconsistency of the spot ball and the tendency for it to ‘kick’ when the ebony contacted the ivory of the object ball, it was considered to be a disadvantage to play with it.

In addition to these problems, the porous ivory could also change shape during the course of a game as it absorbed moisture from a humid atmosphere. It was therefore common to see players when shooting from the baulk, carefully placing their ball so that the ‘poles’ of the central nerve were exactly horizontal. This would minimise the effects of any distortion.

Eventually, due to problems such as cost of manufacture, lack of durability, and perhaps a shortage of elephants, plastics such as Celluloid began to replace ivory in the manufacture of pool balls. Due to its bad habit of exploding on a hard shot, Celluloid has since been replaced by Phenolic Resin as the standard material in modern billiard ball construction.

The modern era
To say that the game continued to develop in materials and equipment is something of an understatement, but to even tread into that territory would fill this magazine three times over!

By the 20th century, most modifications could really only be considered ‘refinements’. Although various materials have been trialled over the last 100 years, the billiard table manufactured at the latter end of the century is remarkably similar in design and style to that manufactured in the earliest years.

One example of change is in the cushions of the table. Today cushion rubbers are moulded in a single piece, contrasting with the layered strip rubber used in earlier years. Again, in the early 1980s, after much debate consensus was reached in relation to the size, shape and undercut of cushion pocket openings, new templates superseding those laid down in 1892.

Equally, the billiard cue is largely the same, although more likely to be made as a two-piece or three-quarter joint item (the latter normally with its own extension).

It should be noted that this is very much an abridged chronicle. Should you wish to learn more, we strongly recommend getting a copy of the amazing book The Billiard Encyclopedia, an illustrated history of the sport, by Victor Stein and Paul Rubino.

Details are available at www.billiardencyclopedia.com with overseas delivery available.