One of the best motorbike collections in Australia is located in an old ice cream factory in Cairns. With over 40 bikes of significance and a mountain of memorabilia and history, some have even said it’s the best tourist attraction in Cairns. Except for one small issue… it’s not actually open as a public exhibition.

Ian Hopkins (or Hoppy to his mates) has lived and breathed motorbikes his whole life. He has worked with them, raced them and – bit by bit – collected them. The end result is nothing short of spectacular.

“At one point there were over 90 in the collection, but I trimmed that down – it just wasn’t manageable,” says Hoppy. Furthermore, he says, the physical bikes are only part of the collection.

“The memorabilia and the history is more important to me than the actual bikes. The collection essentially built up over many years through the connections I’ve had in my life.”

In that sense, Hoppy’s bikes are far more than a collection; they are a chronicle of his life.

“It started when I was about 13-years-old living on the farm in Victoria. Dad hated motorbikes – he had one because that’s all he could afford living in a country town, but he kept falling off it. So he was never keen on letting me get one.

“Eventually, my older brother Daryl and I bought an old Harley Davidson. Dad relented because it wasn’t working so he thought there was no danger. Yet somehow we managed to get it going and would ride it around the farm, but it was so bloody big and heavy it was a pain to use. If it fell over, we couldn’t even lift it back upright!” 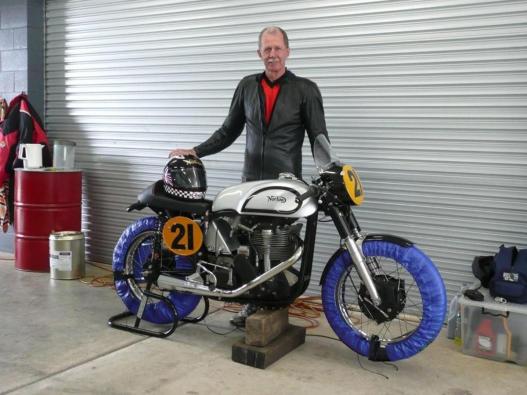 Although Daryl would end up “with the same car for years”, Hoppy was bitten by the mechanical bug and started working with motors throughout his personal and professional life.

“I started as a junior design draftsman at Repco Research and everything had to be spot on or it wouldn’t be reliable or fast enough.

“I think a mechanical passion tends to make you organised in life. You can’t have an interest in motorbikes or cars or anything mechanical unless you’re an organised person. And I still work that way in all parts of my life now. Put it this way, I can’t walk by a crooked picture on the wall without straightening it.”

It certainly explains the immaculate neatness of Hoppy’s collection and the reason why so many people assume it is a commercial operation. Every piece has a specific place and is in the best possible condition it can be. Additionally, the collection is in the same building as his office, allowing him to look out on it and enjoy it every day.

“It’s a bit of a distraction sometimes, but I wouldn’t change it for anything,” he says. “I think it’s important to have these things around you.”

As mentioned previously, the office and display are located in the re-developed Peter’s Ice Cream factory alongside his marine business. He says it is probably one of the only buildings in Cairns where he could walk straight in and store his collection, as the fully insulated walls mean the bikes are protected from the tropical humidity.

It was, however, only meant to be an interim solution. Hoppy’s initial idea was to use his collection to create a meeting place for guys to go and chat. He drew up designs for an open, social building where the bikes were really only there as a catalyst to get people in.

“I had plans in my head for a large sloping property with a big veranda overlooking the car park, so you could come along and sit outside with a cup of coffee looking at your own car or bike and then chat to other blokes about what they had been working on – all with my collection in the background.”

It is this appreciation, rather than commercial gain, that he gets true satisfaction from.

“I don’t think I could do it as a commercial business,” he adds. “When you do that, the basis of everything shifts from being a personal passion to a money-making venture – and that would feel wrong. I’ve had people from all around the world drop in because they’ve heard about it from a mate and they give me a call and organise a time – and I’m happy with that arrangement.”

They’re not all private tours however. Hoppy is more than willing to open up the collection for a worthwhile cause. Last year the local police dropped by hoping to get a donation for a charity car rally they had entered. But rather than just hand over a cheque and get some business signage on the car, Hoppy opened up his collection to the public and put on a day with a BBQ and drinks. With a very modest cover charge he made over $5,500 for the cause.

While the collection is clearly something that gives him immense enjoyment, a quick conversation with the man highlights just how important the stories are behind each piece.

“A lot of the collecting goes back many years,” he explains.

When Repco pulled out of racing, the people involved in that area of the business moved into other industries, but Hoppy still had the passion.

“I got into classic racing – and that introduced to me some amazing people; like the Horner boys who have a great engineering business in Melbourne. They make brand new re-engineered Vincents that we have taken over to the US and UK to race. It’s opened up so much of the racing world to me and continues to do so.

“The best thing about bikes is the people you meet around the world – and this fantastic shared passion we all have. You can meet someone from the other side of the planet from a completely different background to you and just have this common ground.”

As such, the pieces are wide and varied. Some are gifts from people he has worked with or met along the way – others were purchased to use or admire.

Importantly, they have never been acquired with a view to making money.

“I tell my wife that I have no idea what they are worth and I’m not particularly interested in knowing. If I drop dead tomorrow and she needs the money, all she has to do is ring the auctioneers and whatever the market is prepared to pay for them on that day is what they are worth.

“My only hope is that whoever buys them has the passion to maintain them. I believe that if you have a classic piece of memorabilia – whatever it might be – that you are really just a custodian for the period that you’ve got it. They live on beyond you, but you need to make sure you hand them over in the best condition you can.”

So when you have such a diverse collection with genuinely personal meaning, is it possible to select a favourite piece?

“If you made me choose one, I’d have to say the Manx Norton. They are now considered a true classic bike but they stopped making them in 1963. However, there is a whole industry in England where they continue to make new parts, so we were able to get everything as newly manufactured parts and then assemble it into a complete bike.

“So essentially I’ve got a brand new Norton. The whole reason for going through it was that I wanted to go racing, but I didn’t want to do it on a 50-year-old bike with 50-year-old parts and have the whole thing blow up or fall apart on me down the straight.”

Amazingly, he still races his bikes to this day, although he admits it has become more difficult to find the time to drive down from Cairns to the tracks in NSW and Victoria on a regular basis. As much as anything, it puts a strain on family who are more than happy to relax in the tropics.

“A lot of people might play golf two or three times a week or fish every weekend and I see this as the same thing – it’s just a passion that keeps me happy and sane.

“I caught up with Ken Horner recently after the passing of his father. He said to me: ‘Always keep the bag stuffed full’. In other words, keep yourself busy with lots to do and enjoy yourself.

“I think that’s a great saying.”