Trending
You are at:Home»Hobbies»Collections»Turning pages

Books are being read via all manner of digital platforms these days but you really can’t beat turning the pages of a printed copy. Justin Felix caught up with Jan Neil, an avid book collector who has amassed over 3000 books in only a few years.

Jan Neil isn’t a life-long book worm… quite the contrary in fact. You see reading didn’t interest him during his schooling years and he was far too busy running the business his parents had built once he had left. There was never enough time to immerse himself in the words of one of the many authors he has, in recent times, become so fond of. 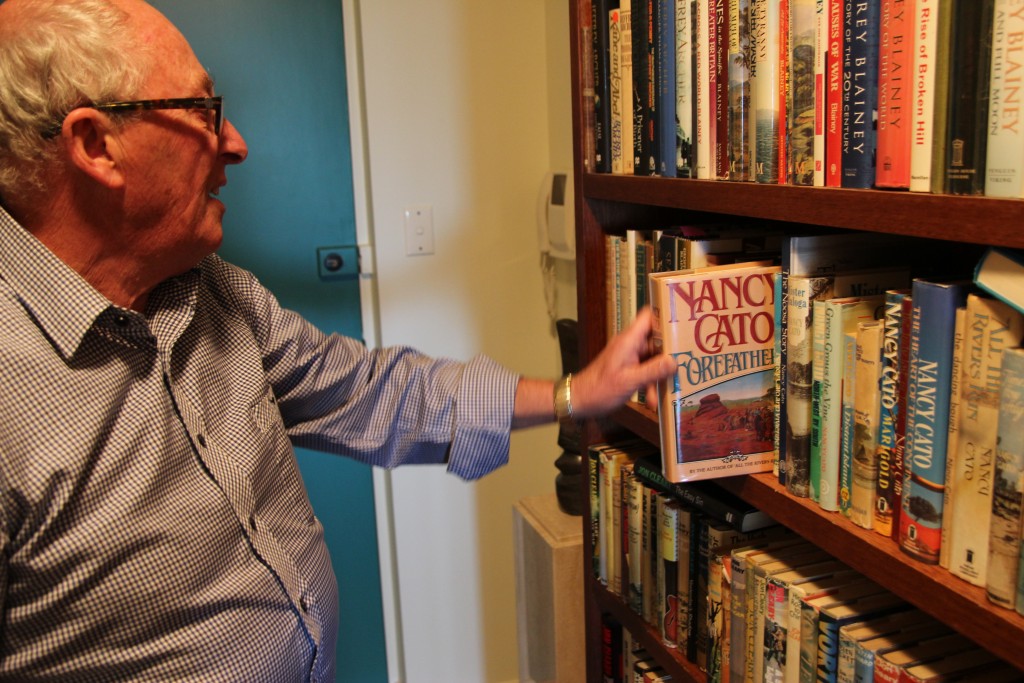 Similarly to the vast amount of subjects and genres written about, types of readers seem just as complex. There are the habitual types who can’t go a day without turning the pages of their current novel, and then there are the weekend readers. I’ve met those whom only read while travelling and others whom prefer only to read while on the loo. There are those who become obsessed with the characters, authors and plots too… we’re only just scratching the surface here but you get my drift.

So when I met Jan I was not only curious to find out how he became an avid reader, but even more so, how that progressed to a collection amassing over 3000 books in only a few years.

“Where would you like me to start?” Jan asked.

I knew I wasn’t going to have to ask many questions from then on in. Like the authors of the books he collected, he was a storyteller.

“After I left school I got involved with my parents’ transport business in Echuca/Moama. Gradually that business grew and being the only child meant I really pushed it along. I made a promise that when I left school I would work really hard with the aim of semi-retiring at 45. Well 45 came and 45 went, then it became 50, 55 and then 60…

“I began to tell myself that if you enjoy what you do then it’s a hobby as much as it is work. The people at work became my good friends because I didn’t really have time to socialise. I planned to pass my business to my son and two daughters, as my father did to me,” Jan explains.

The progression line was taking a natural course but unfortunately Jan’s son passed in 1997 just after Christmas. He had to step back into the business. His daughters and son in laws started to work for him and when the time was right he asked if they were interested in taking over the business. They said yes and they’ve kept it going strong ever since, much to his delight of course.

“Everything was set up and all was travelling well but then it dawned on me… ‘What was I going to do with myself?’ My wife and I bought 80 acres near Echuca, put some cattle on and while it was OK, it wasn’t really for me. I couldn’t make peace with the fact that I had nothing to do so I decided to start another little business that I would help to build up and eventually sell.”

It was essentially a business that serviced existing clientele – refurbishing equipment, fixing wooden pallets and that sort of stuff. Within 12 months it had grown rapidly. Jan found a business partner and after five years when he was around 65 he thought it was best to step out – he didn’t want to feel hemmed down again and it was starting to feel that way.

“I’ve sort of been retired since but still had the craving to do something to really occupy my time. After 2-3 years I started collecting books. I had a friend who had been doing it his whole life so I thought I could do the same. I knew I could take it one step further though. I thought up a plan to trade books on eBay and the likes but I’ve never gotten that far – I’m still collecting books. If I ever get sick of it then I’ll start trading them. I’ve still got the inclination to want to wheel and deal,” he laughs.

Jan admits to never being a book buff but he really enjoyed reading War and Peace by Leo Tolstoy. His son gave it to him as a gift.

“It was a heavy book but I really got into it. So I thought yep, this is for me.”

A friend of Jan’s showed him his rooms of books, told him what some were worth and his mind begun to tick.

“I think I’ve got a cash register instead of a brain sometimes,” Jan chuckles.

Then came the time to decide which authors he would start collecting. He figured the best way to work it out was to buy one or two books from a particular author and if he enjoyed them he would then attempt to collect their entire catalogue. He wasn’t fussed on fiction or non-fiction and there wasn’t one particular genre that he fancied over another. Most of his collection has been written by Aussie authors but there are exceptions. 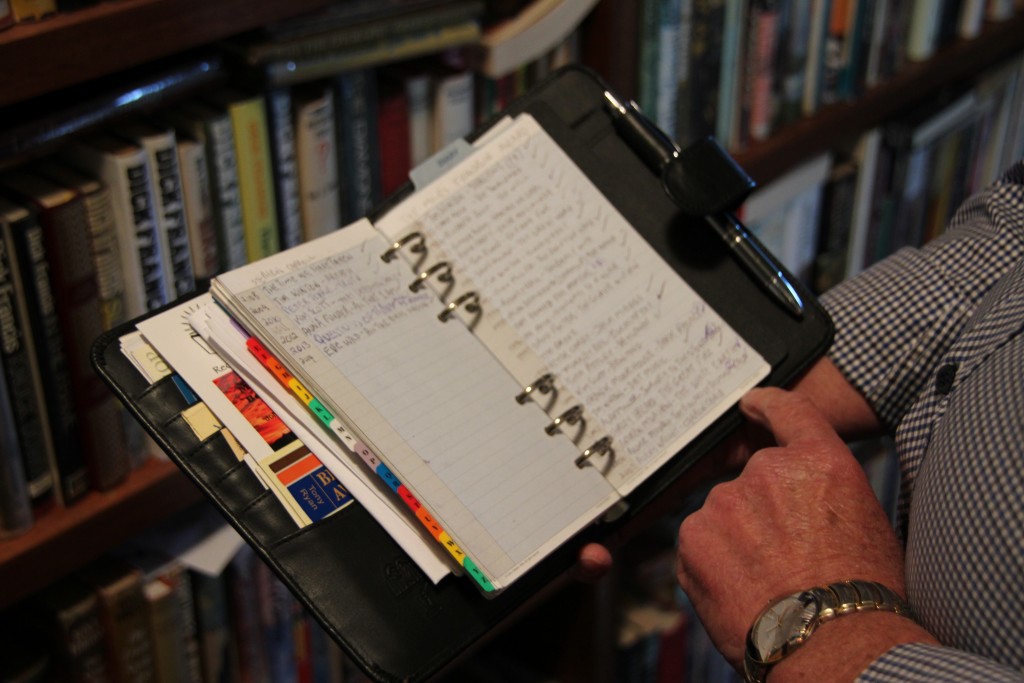 To keep track of them all, he has a little black book with all of the author’s names and books they have written. He ticks off what he has, which edition he’s acquired and leaves a blank space next to those that he is still looking for.

“If I was eventually going to sell them later on I knew that hard covers and dust jackets were the way to go. First editions were also important, and when possible, I wanted to meet the author and get the books signed. In a lot of cases I’ve been able to make this happen. And that has been a big part of the cut and thrust for me – meeting the authors.”

The first author he collected was Jeffrey Archer.

“He comes out to Australia to watch The Ashes and release a book (or use to) and I was fortunate enough to attend a luncheon where he spoke about his latest novel. I had about 20 of his books and asked his publisher if it was OK to bring them along. I made a concerted effort to be the last one up for signatures so that I could spend some more time with him. He was quite chuffed to see my collection of his books. Half way through writing his name in one of them he stopped to ask which one I enjoyed the most. I replied sheepishly, ‘As a matter of fact I haven’t read any of them’. He looked at me gobsmacked. ‘I’m sorry, I am going to read them – I’ve just been so busy trying to collect them’. The next Ashes I went back and told him I had finally read some to which he smiled. I had bought another seven or so books for him to sign. 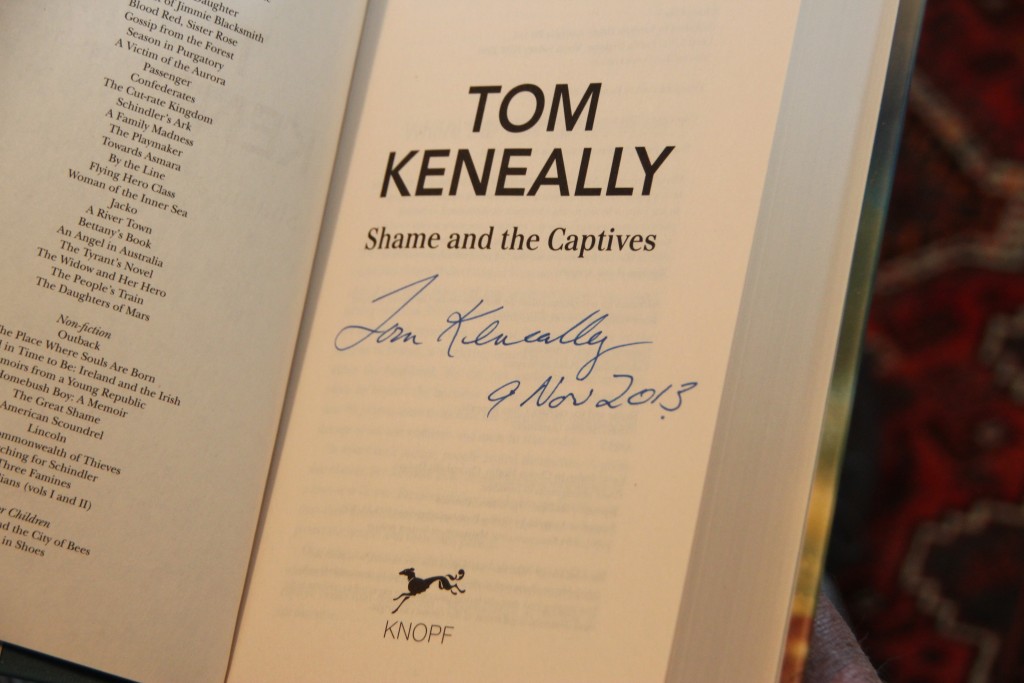 “It’s just so interesting to meet these people,” Jan explains. “It’s not just about them signing the book – it’s meeting the people – to me, it’s something special.”

So in this digital age where bookstores continually close their doors and the internet becomes the biggest bookstore of all, where does one go to add to his collection?

“If I buy a book now it’s usually second hand because I can spend 2-3 hours in a second hand book shop just looking for the books that I want. I can’t walk past one without walking in. Wherever I go, my little black book comes with me. When my wife goes shopping I find out where she’s going so I can look up any book shops in the area. It’s the one way she can get me to go shopping with her,” he laughs. “I’m not that fussed on eBay or online stores – I’ll only resort to it if I’ve looked for something for 12 months and haven’t found it.”

While admitting that Kindle’s and tablets have had a bit of a bearing on the market, Jan thinks that a lot of people are going back to the books because they’re more tangible and people like the feel of real paper.

“I don’t have a preferred place to read, I just read wherever really. It’s a lot easier to buy books than it is to read them so I’m always out and about looking – that’s perhaps the more interesting part for me. I usually have a couple of books on the go. I’ll read 12-15 a year which isn’t a lot,” Jan explains.

Reading has encouraged his own hand at penning some stories though.

“It has inspired me to write a little bit. I have started a project but I’ve been putting it off a little. I wrote down a lot of the fun and naughty stuff I did between when I can remember until I was around 16-17. I just wrote dot points. There is 60 or 70 written down. And I’ve written one page per item. I want to pass it on to my grandchildren because they don’t know a lot of things that I got up to when I was young. It’s all family history. 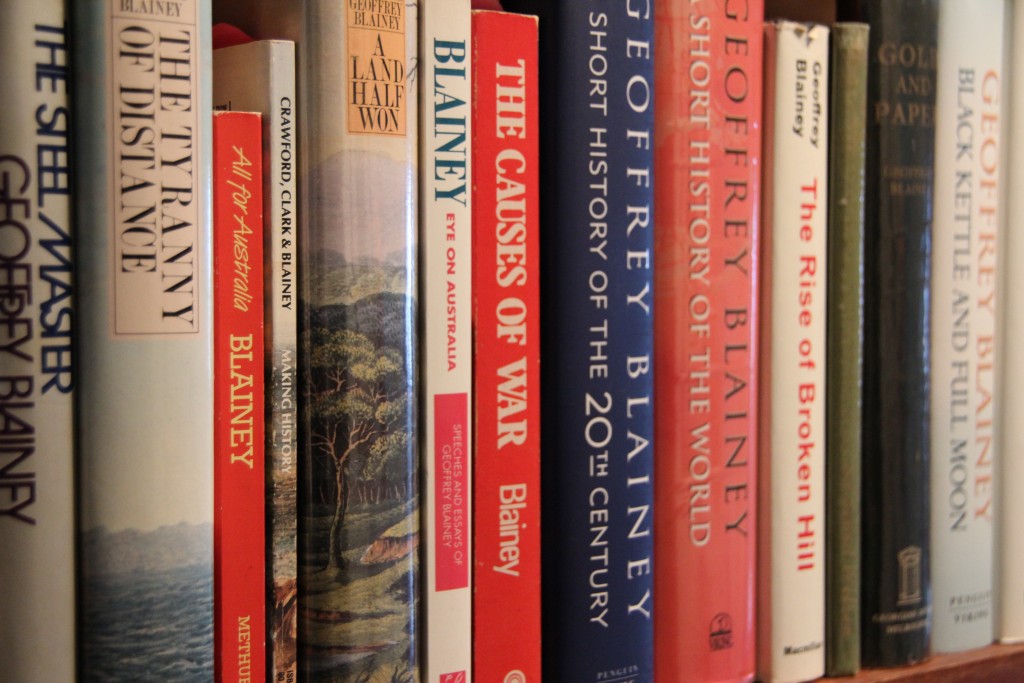 I remember living next door to a water tower when I was a kid. I use to wait for night to fall before I would go to the tower and catch the local pigeons. I’d take them home and putting them in an empty aviary. My dad loved birds so he had aviaries set up in the backyard. I put nesting boxes in and then I started selling them to the other kids at school for around five shillings a pair. I learnt a lot about business then because after a while some kids were starting to breed them too. The cheeky buggers started selling pigeons as well so I had competition,” he explains with a fond smile.

A third of his collection currently sits in a shipping container while those on display in his home adorn a large bookcase that greets people as they enter his home. He does have plans to convert a bathroom into a book room but his wife doesn’t know about it so he’ll have to work on convincing her.

So can he see himself going back to his original plan of wheeling and dealing in books anytime soon?