Trending
You are at:Home»Hobbies»Boating»Warby Speed Demons

Ken Warby is currently the fastest man on water but when he set the world record 36 years ago, he inspired his son David to do the same. Justin Felix caught up with the father and son duo whose bond is cemented by a need for speed. 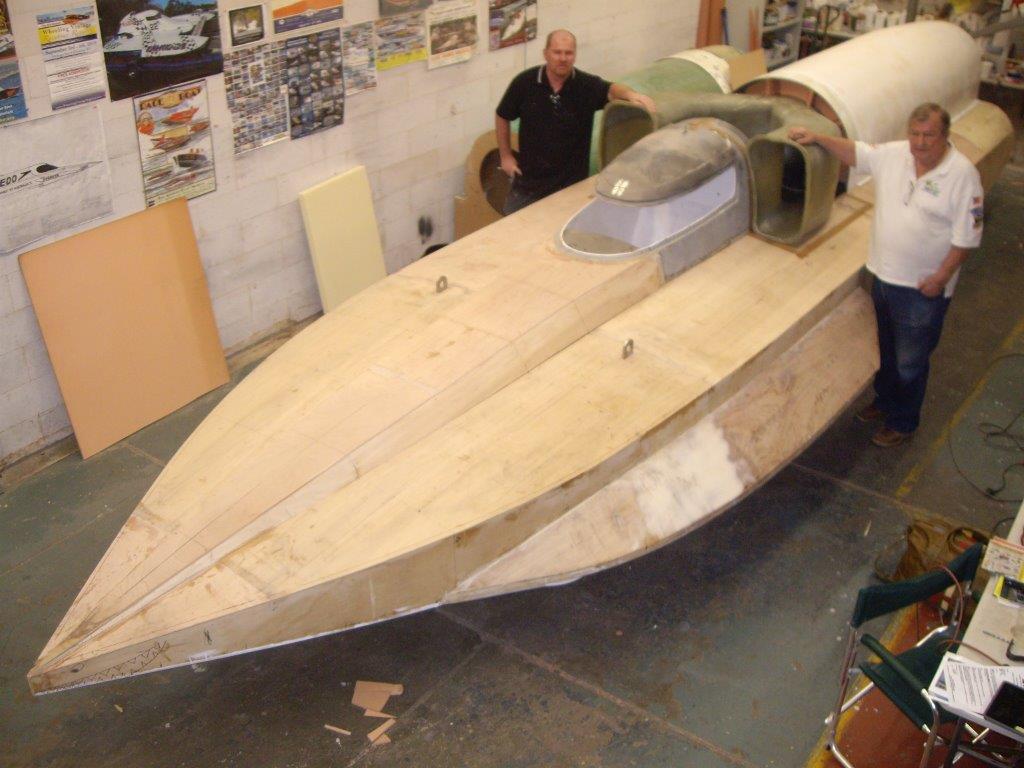 It’s hard to believe that this wooden frame will reach some 500km/h on water.

As kids, we probably all shared our future dreams with our parents and siblings. For most, those dreams are nothing but a distant memory, but for others, they’ve managed to turn them into life-long realities. At one stage I wanted to be a marine biologist, but instead, I’m here to tell you about a remarkable father and son duo whose dream also involved the water… just a little more fast-paced.

As a child, Ken Warby had a dream to become the fastest man on water.

Not your average dream right?

He built model boats as a kid before deciding to go all out on a life-size race boat at the tender age of 14.

“My passion for boats and race boats in particular, goes back an awful long way,” Ken explains. “I was at a scout camp at Croudace Bay in Lake Macquarie when I noticed a little ply wood boat come to shore. I looked at it and said to myself, ‘Yeah I can make one of those’.”

And that he did.

“I started building model boats and aeroplanes soon after but once I started on real boats I couldn’t go back to the models. I completed a degree in Mechanical Engineering so that taught me how to ‘think’ more than anything else. It really helped me to understand what it took to make a boat go faster.

“Back in the early days I saw a drawing of Donald Campbell’s jet boat and I made a model of it with a small Jet-X rocket engine in it before taking it down to the local mud hole. I went back and told my mother that I would do that for real one day. She laughed and blew it off,” Ken chuckles. 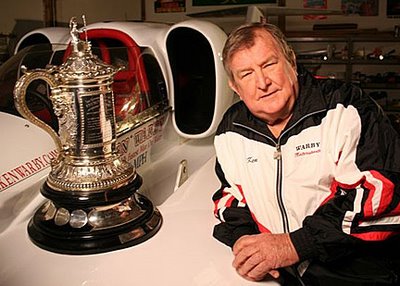 Ken Warby currently holds the world record for being the fastest man on water.

Ken continued to build and race boats around Australia in the early ’60s and ’70s, winning many championships along the way, and moving up to faster boats in the process. In 1970 Ken started construction on Spirit of Australia – the boat that would eventually help him to realise his childhood dream of becoming the fastest man on water.

Ken designed Spirit of Australia on the family home’s kitchen table, and started construction in the backyard in 1972. It was built out in the open, which meant Ken could only build the boat in good weather and during daylight hours. He would buy as many pieces of plywood and timber as his budget would allow and incredibly he did it all with only three power tools – a drill, circular saw and belt sander. To power the craft, Ken went to an RAAF surplus auction in Sydney and purchased three j-34 engines, two for $100 each, and one for $60.

The boat was ready to launch in 1974, but it was far from a finished product. With no engine cowlings, air intakes, or tailplane; Ken set out on testing the boat and refining it before taking the Australian National Speed record. With the boat building up speed, Ken needed to find a longer stretch of water. After a long search, it was decided that Blowering Dam near Tumut, NSW, was the perfect location. Ken continued to build up speeds getting towards the 200MPH barrier.

To help raise money for the project, Ken gave up his day job to focus on ways to achieve the world water speed record. Ken displayed the boat at Shell service stations around Australia and interestingly enough, he also took up oil painting.

“I gave up my day job and started doing some oil paintings in shopping centres to earn some money. It allowed me to take some time off from full-time work and concentrate on what I needed to do on the boat. I didn’t have a background in art but I remembering seeing an artist at a road show and remarking to myself that I could do it.”

Perhaps it’s this give-it-a-go attitude that has made Ken so successful in his pursuit of childhood dreams.

Ken wanted to get windtunnel tests done on his design as it would assist him with working out exactly how to get him and the Spirit of Australia into the record books. Ken took his wind tunnel model to NSW University where he met Professor Tom Fink. Tom was a member of the crew who did the testing on Donald Campbell’s Bluebird K7. Tom was so impressed with Ken’s design, and approach to the record, that he ended up joining the team for the world record bids. 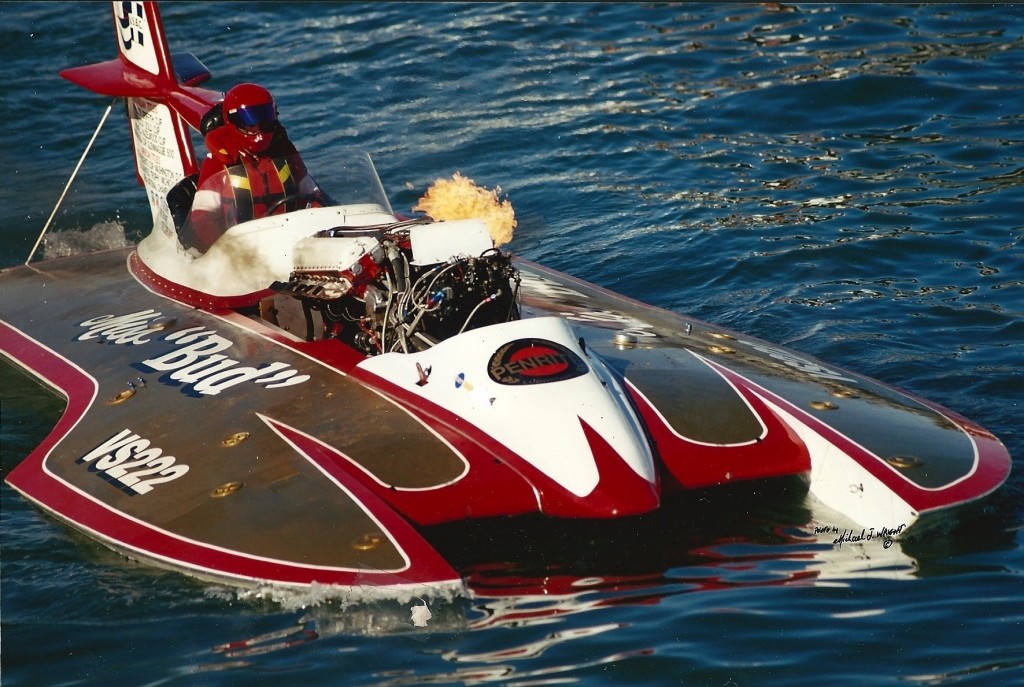 The Warby team have a fascination with all things fast and it’s this passion and experience that will guide Dave, like his father, to world record glory!

With the help of Tom, a sponsorship from local retail store Fossey’s and testing out of the way, Ken took his first world water speed record at 288mph in November 1977. While satisfied with his achievements, Ken felt that he could push the boat even further – he had the 300MPH barrier in mind. With a sponsorship from Speedo, and a j-34 jet engine in place, Ken returned to Blowering Dam in 1978, this time to become the first man in history to break the 300mph and 500km/h barriers with an average speed of 317.60mph… not bad for a boat built on a shoe string budget, in the backyard.

While chasing the dream he developed up as a child, Ken was unknowingly inspiring his own son’s future ambitions. David Warby wants to be the first person to break his dad’s world record… and live to tell the story. Two men have tried to break the record since ’78 but unfortunately both died. Ken is the only person in the world who has held a water speed record and survived.

“It is a dangerous hobby but if you do your homework and know what you’re looking at it’s ok. For as long as I can remember we’ve been talking and looking at water speed records and you soon learn where the problems are and learn how to solve them. Once you start to live in the environment you learn what does and doesn’t work,” David Warby explains.

“When dad broke the record I was around 10 years old so I remember growing up with the boat being built in the backyard. There were always bits and pieces lying around. As a kid I went to boat races on weekends and became entrenched in it all. I was always surrounded by boat racing people.” 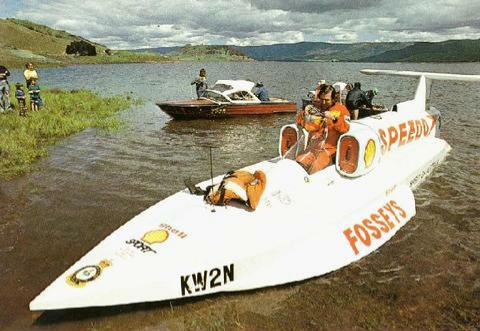 Interestingly, David only ever saw the Spirit of Australia in action during test runs and demonstrations.

“I never actually saw it break the water speed record because dad didn’t want his family there. It was a risky pursuit and he refused to put any potential media pressure on the family.

“I was quite naive to what the Spirit of Australia could actually do but I knew it was something special and because of that I wanted to follow in dad’s footsteps from an early age. Every young boy idolises what their father does and seeing mine take on the world and beating them, made it pretty hard for me not to.”

As a teenager David was part of his father’s jet drag racing team, touring Australia and America with jet dragster’s and jet funny cars, developing a good understanding of how jet engines and afterburners worked. Seeing them work first hand and being around jet car racers, and record breakers such as Tom Brown, Rosco McGlashan, Romeo Palamides and the Late Craig Arfon’s, added to the need for speed.

Later in his 20s Dave wanted to take steps to follow his childhood dream, just as his dad did. He knew it was his turn to become the fastest man on water. He restored an old hydroplane in his grandfather’s backyard, the same place his father built his first race boat, even using some of the same tools.

David now build’s his own hydroplanes from scratch and with a jet powered unlimited hydroplane under construction in his own workshop, Ken’s record looks under threat. And he’s been by his son’s side the whole way through.

“It’s been great working with dad on the Sprit of Australia II – it’s the ultimate father and son project as far as I’m concerned. I couldn’t be working with anyone better either; he owns the water speed record after all. He’s been there and done it but he certainly hasn’t pushed me into it. If anything I have dragged him into it. We know we have the right boat and we’re 100% sure we can get the job done.

“We’ve just finished the woodwork, got the engine in it and finishing the air intake at the moment. It will be pretty close by the end of the year. We don’t have any sponsors or backing at the moment. We want it to be built first before we ask for sponsors to start supporting us,” David says.

David admits that they’re not a big budget team by any stretch of the imagination and the boat is still being built on a grassroots type level but processes have come a long way from the 70s when Ken built the Spirit of Australia.

“Technology has obviously come a long way but safety standards have changed a lot too. When dad broke the record he was just sitting on a sheet of ply wood without a seat belt,” David says in disbelief.

“Now we have a safety capsule in it. I’m a registered cockpit manufacturer for powerboats so I can build and design my own safety capsules. As far as materials for the boat go, it’s still made out of wood. We’ve got a bigger engine this time with 50% more power but it’s not just about the power– it’s about managing the design and keeping the boat on the water, rather than in the air. It’s different to a car where you have downforce and you can use that downforce to your advantage. It’s a balancing act – centre of gravity, drag and inertia.”

Ken lives in America now but he comes back to Newcastle for three weeks at a time to help David with the boat that he hopes to see break his original record.

“The passion for boats has kept us close over the years and I’ve learnt a lifetime of lessons from dad over the years. In particular, I’ve learnt that if you want something done, you do it yourself.”
“We’re both boat crazy and becoming the fastest men on water really is the Holy Grail for us. There is no pot of gold at the end of the run and if anything, it costs us money to make an attempt at breaking the record. You really have to be passionate about boats and speed to do what we do,” Ken explains.

“It will be hard for me to stand on the bank and watch David go that fast because I’m used to being that guy. I’ll be gunning for him to break it though… I’ll be extremely proud.”