Whether you’re a car enthusiast or not, there’s no denying that muscle cars and hot rods are appealing. Build a garage around eight of them and slap a man cave out the back and you’ve got a lot of jealous friends. Justin Felix caught up with the man who calls this place home.

Malcolm Forbes coined the phrase ‘he who dies with the most toys wins’. His playground boasted planes, yachts, motorbikes, art collections and myriad of other non-essential goodies. I wonder though: would he have shared the sentiment had he not inherited one of the biggest magazines in the world? Then again, nobody would have listened if he hadn’t.

John Leggo has plenty of toys but he isn’t boisterous about his collection. He’s as humble as they come and the best part is – he worked incredibly hard to obtain what he has. 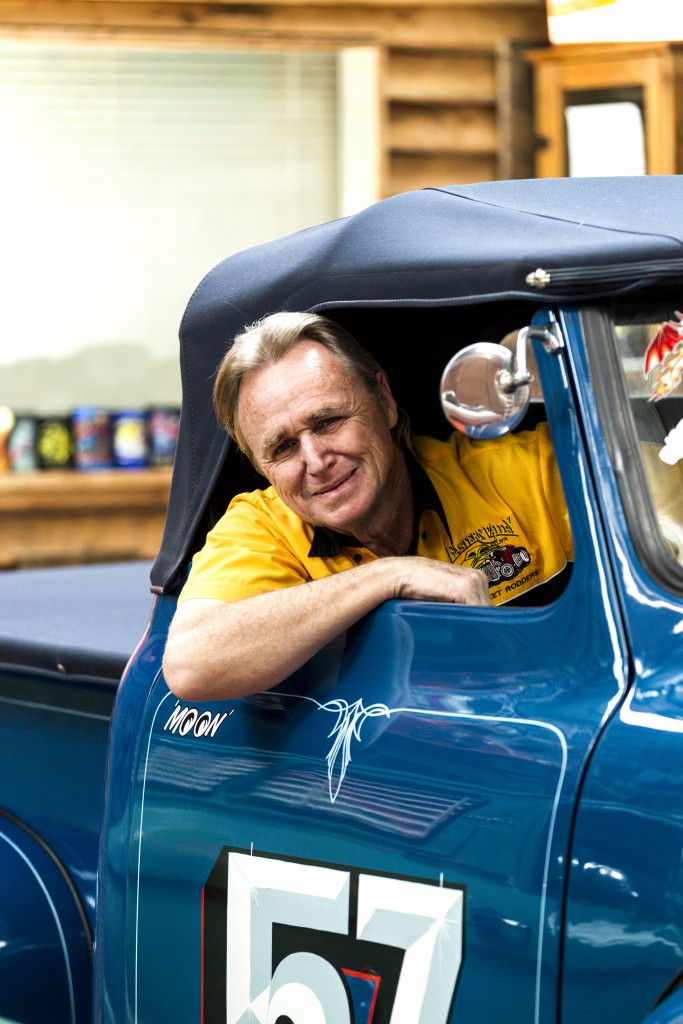 He’s into cars but I’m not sure enthusiast is the appropriate word to describe him. Perhaps zealot or aficionado is more suitable. He doesn’t necessarily prefer a certain type of car. He appreciates hot rods, muscle cars, cruisers and utes. The cars don’t have to be of a particular era or vintage, nor do they have to be exceptionally quick. The only pre-requisites: They must be Fords and they have to be unique. He doesn’t dislike Chevrolets or Holdens but he likes to be different. Most of his mates own or collect Holdens or Chevvies so he likes to stick it to them with his Fords.

John knows what he likes and he definitely knows how to display his assets. Leggo Land, as his space is aptly named, is actually John’s second man cave. The original still sits pretty at his last property in the Mornington-Peninsula, an area where John and wife Raelene spent most of their lives before making the move to Traralgon in Victoria’s Gippsland region.

“We had three quarters of an acre so my garage was a lot bigger there than it is here. It featured a full scale American diner and a saloon bar. We loved it but it was getting extremely busy down there. Maybe I’m just getting old and grumpy,” John laughs.

“One of my sons was living in Traralgon with his wife and our grandkids before my other son also made the move. The continuous driving to visit the family was driving us insane. We ended up spending more time here than we did on the Peninsula so we took the leap and bought a property here. Thankfully we knew a lot of the hot rodders here through the clubs so the transition was made a bit easier.

The reincarnation of Leggo Land in Traralgon is nothing short of spectacular either. It’s hard to imagine that the area where the garage sits was scrubland only 10 months ago. It’s a big achievement and I quickly learnt that it reflected John’s character as a whole. “I don’t like to waste time on things,” John explains.

“Once I know what I want I’ll focus all of my energy into it until I’m happy. Unlike some people who have 20 or 30 unfinished projects in the pipeline, I like to get things done as soon as possible.” 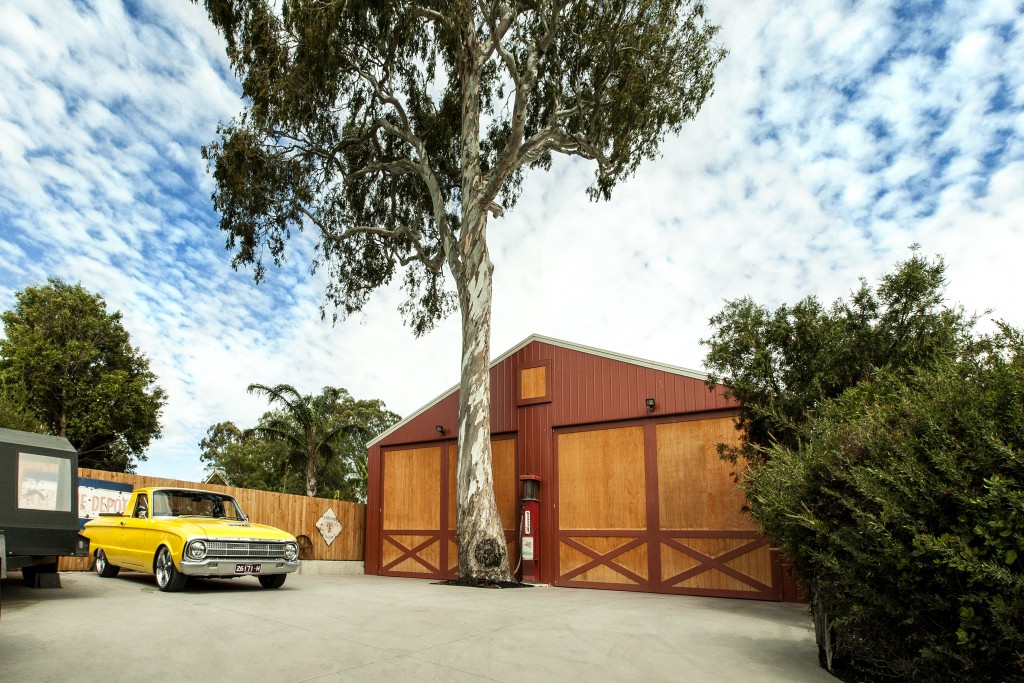 John strives for perfection and doesn’t do anything half-arsed. In fact our interview was delayed on a number of occasions because he wasn’t quite happy with his space yet. I was only happy to oblige, as you can see by the photos, it was worth the wait.

From the exterior, Leggo Land looks more like a barn than a garage but don’t be mistaken – there’s no hay or livestock in here. The cars reign supreme and there are eight of them sitting side-by-side. They’re all Fords and each one is as pristine as the one beside it. The walls are covered in number plates, signs and framed photos. You could eat off the floor and there’s enough bling around to make Paris Hilton jealous.

His pride and joy sits proudly in one corner. It’s a ’56 Ford Crown Victoria (Vicky). Vicky was a Las Vegas show car in her past life and she’s powered by a 460 big block.” She’s a weapon of a car but not the one that holds most value to him.

“If I were to choose a favourite I’d have to say it’s the F100 Pickup. I found it in a pig pen and the roof was all rusted out. It was my first attempt at building a car some 33 years ago. I got three bodies and bits and pieces from wherever I could to build it all myself. It owes me nothing and isn’t worth much but it will be around forever as I’ve passed it onto my son and he’ll eventually pass it down to his kids. It’s the sentimental value more than anything,” John explains. 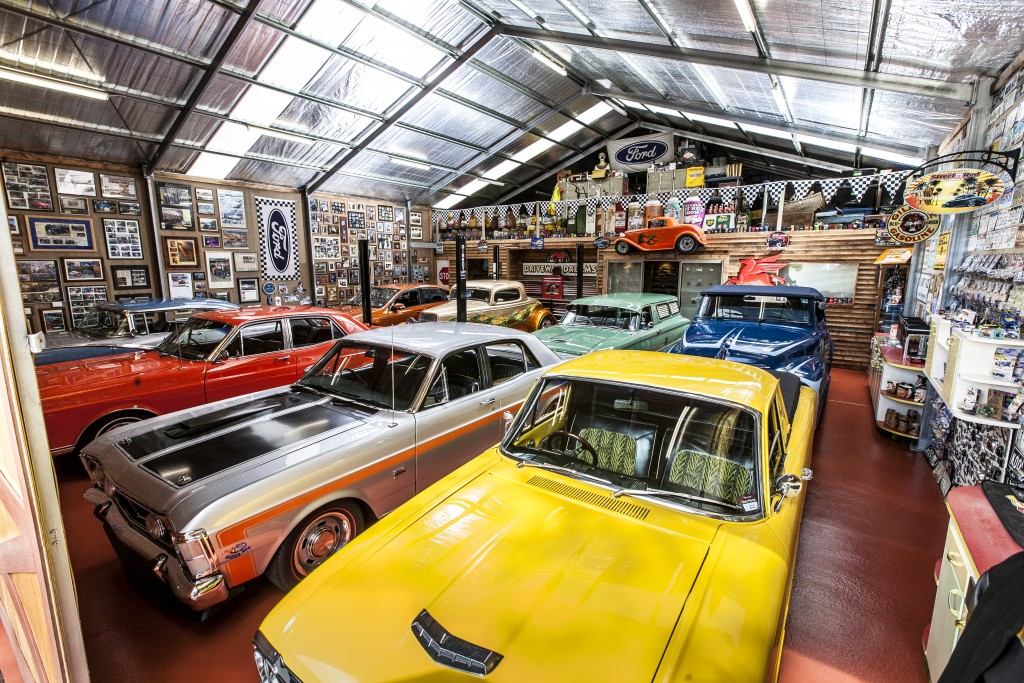 The last car John built is also on show. It’s a 1934 Ford three window coupe adorned by custom flames. “Mat Egan painted the flames for me and nobody else had anything like them on their hot rods. The custom paint job has one a number of awards at shows. The flames are pretty out there. A few people have similar colours now but mine was the first and that’s all that matters.”

A wall and sliding door demarcates the showroom from the man cave which houses hundreds of model cars, a bar, lounges, a TV and more memorabilia. It is here where John retreats to each day to collect his thoughts and get the mind right. “This is my space. I like to get out of the house and spend a few hours here. I’ll often read a magazine, watch a movie or just chill out and have a coffee.”

The model cars are displayed in custom cabinets and are divided into sections according to make or type. “My friends and family know what to buy me when it comes to birthdays and Christmas. They know not to bother with socks and jocks – it’s all about the model cars. It makes it easy for them but finding one I haven’t got is the hard part. I think the grandkids might be running out of options as they recently bought me a hearse. Or maybe they’re trying to tell me something.” John laughs.

“I’ve been into cars since I was young but I didn’t adopt the passion from my dad or anything, I just feel in love with them. I bought a couple and built my own but between trying to grow my business and having kids I sold all of the cars except for the F100.

When John was 16 he left high school and started his own business straight away. He was really determined to make something of myself. He was a hard worker and knew he had good things to offer.

His determination paid off. At one point he employed 42 workers who were involved in paving and landscaping. They did big commercial jobs and the business was very successful.  “I never regretted a day of my working life – I loved going to work each day,” says John.

Perhaps his only regret stems from a simple mistake that changed the rest of his life. “I was taking a sample out of my boot for a council. The sample measured 1m x 1m x 60mm. It was very heavy and I was in a hurry. I turned the wrong way without moving my feet and bang! I spent three months in a hospital, two months in a walking frame and now I live every day on heavy pain killers. Since the accident John hasn’t been able to build or work on any of his cars. 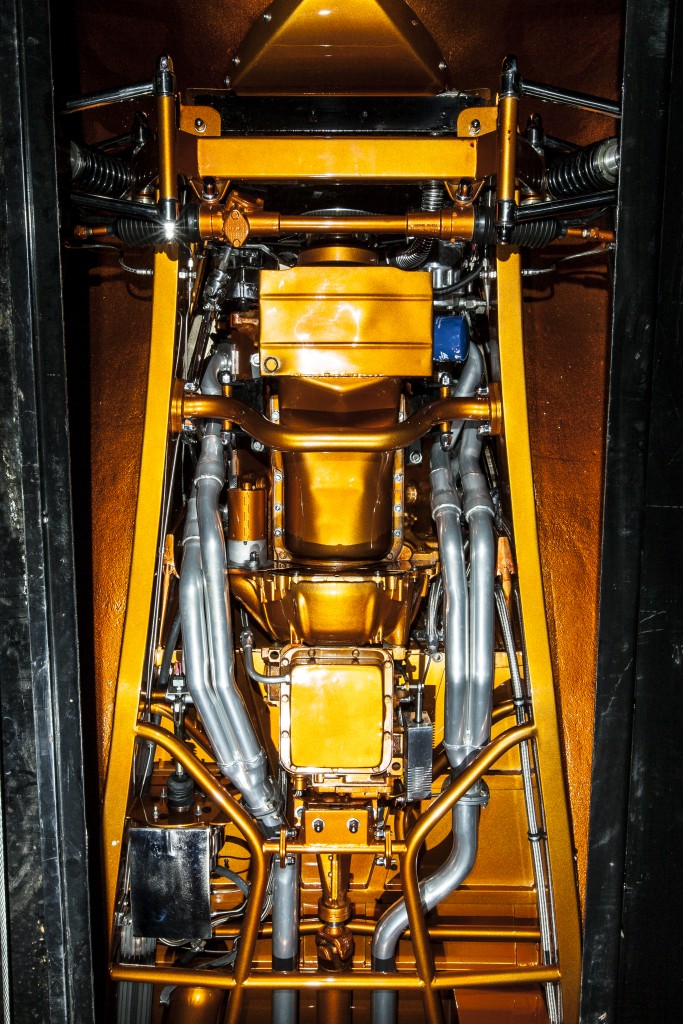 “I don’t have a lot of feeling in my leg because the nerves in my lower back are substantially damaged. I can’t drive for long periods of time any more but I don’t dwell on it. I wake up every day and I’m grateful to be alive. Even though my body isn’t right my mind is racing 24/7 and the brain is a powerful thing,” says John.

He could have easily walked away from his passion and given up on life – as many have done before him – but I think his determination and zest for life is a true measure of the man he’s become. He possesses an enviable trait and it’s one that his family would be proud to adopt. And if it’s anything like his love affair with cars, they shouldn’t have a problem.

“My sons love cars and so too do our daughter in laws. We’re actually good friends with their parents as they’re hot rodders as well.” It’s a true family affair and one that will no doubt be embedded in future generations. John’s grandkids love Leggo Land and will soon have their own room to play in on the garage’s mezzanine which is still a work in progress.

Raelene is also mad about cars and her Ford XW GT is the newest member of the family. “Raelene’s just as passionate about it all as I am. She designs a lot of the car interiors and reupholsters seats and customises colours. I’ve been really lucky as she puts up with a lot from me. She’ll give most blokes a run for their money if they give her a hard time at the traffic lights too,” John says with a smirk.

John’s cars provide him with an escape from the rest of the world. “I don’t gamble, drink or smoke so cars are my outlet. I do have an addictive nature though which explains why I’ve owned so many,” John explains. “One of the other things I love most about my hobby is the lack of segregation. Age, race and gender don’t matter. When the car club gets together everyone gets along and we enjoy BBQs, dances and gatherings. There aren’t many hobbies that can cater to such a broad range of people.”

So what does a man with all of the toys hope for in the future? Experiences of course…

“I’ve never experienced the Hot Rod scene in America. Before my accident I had planned to retire and head over there but now I can’t sit on a plane so one day I hope to jump on a boat from Sydney and sail over. We’d love to spend around three months there, take our time and do it our way.” 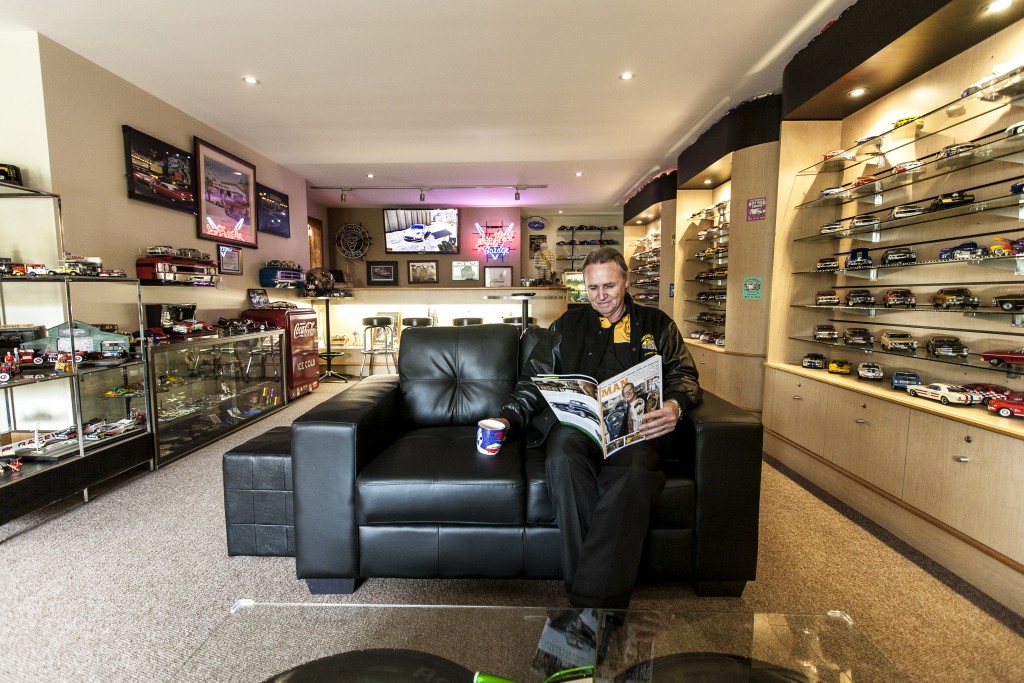