Trending
You are at:Home»In The Drink»Beer»Yenda’s staples

The more I drink certain beers, the more I like them. Sounds fairly straightforward right?

On the flipside, I’ve found that the more I drink of certain beers, the less I like it. Lost yet?

What I’m trying to say is, there’s only a few select beers that I can drink on a regular basis and not get sick of. Some start to get too hoppy. Others can lack in flavour. And some just don’t really hit the mark on a consistent basis. This is all from a personal perspective, of course.

Like a lot of the good things in life, it’s the simple, yet perfected things that are often the best. And a no-fuss beer done well is one of those things.

Yenda brewery states the following, ‘Nothing much is in our beer. Just 4 single ingredients: water, malt, yeast and hops. No additives, no preservatives, no shortcuts, nothing else. It’s the nothing else that makes Yenda beer really something else’.

How good is that?

The crew use water from the Snowy Mountains, locally-grown barley and various hop-types. They don’t try to do anything too crazy. But what they do, is done exceptionally well.

Their three staple beers are the Crisp Lager, Pale Ale and Session Lager.

The award-winning Crisp Lager is a serious thirst quencher and packs in plenty of flavour without being overbearing. It’s a lager with only a hint of bitterness and even sneaks in subtle citrus notes.

Then there’s the Session Lager which is dangerously sessionable. I mean that in the best possible way too. When the sun is cranking and you’re frothing for a sesh in the backyard with mates, this is the brew you want. It only comes in at 3.5% ABV which should keep you in check for a while, despite delivering big on flavour. It’s crisp. It’s refreshing and it’s just downright good. 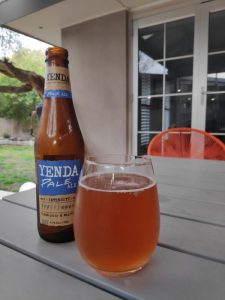 Yenda’s Pale Ale is the third in its staple offering and is my personal favourite. It’s a little different to a lot of pale ales, in that its biscuity malt flavour outshines it’s tropical offerings. For anyone akin to pale ales, you’ll know this is usually the other way around. If that sounds up your alley, definitely give this one a go.

Perhaps the other cool thing about Yenda’s line up is the affordability factor. You can pick up a slab for $45-$60 depending on the brew and your location which makes them even more attractive in my opinion, especially when you consider the price of some craft brews these days!