Sheds are a popular subject among local photographers but a new book coming out is the work of a Brit fascinated with Australian man caves. Ian Kenins reports.

While visiting his sister Rebecca, who’d relocated to Natimuk, a bush town in western Victoria, British photographer Jasper White was curious about the rowdiness he could hear somewhere nearby on New Year’s eve 2012. He followed the noise to where a party was being held in a shed christened Boozy Gully by its sheep-shearing owner. Jasper noticed it was stocked with a fridge, TV, bar stools and bar tables (in this case two huge oil drums) and decorated with beer signs and shelves stacked with trophies. Standard stuff for us Australians, but unusual for the Englishman. 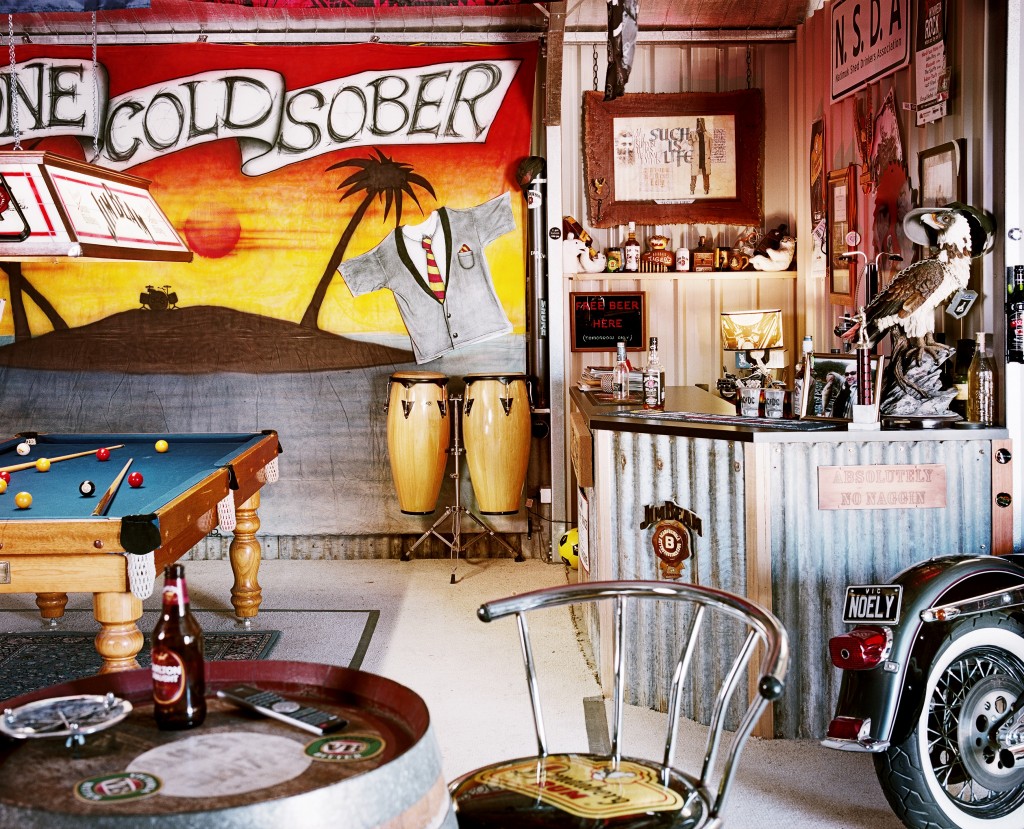 During his travels, Jasper came to realise that each individual shed was just as unique as the bloke that owned it.

Jasper wanted to know if there were more like this. “Plenty” said Rebecca’s husband Peter, who was the local postie.  He introduced Jasper to the owners of other interesting sheds in the area and soon an idea was born. “These places are so full of life and character and it’s something I don’t see that often in England,” said Jasper. “They’re so much bigger in Australia. The large open spaces of rural Australia, and the wildness of that I think translates into the [larger shed]spaces. The environment plays a role in these spaces, although the items people collect are very personal to their identity. Most sheds in England have the same function – somewhere to create, socialise and hide – but are relatively small, so men don’t get the space to fully feed their expression.”

For his last few weeks in Australia Jasper packed his bags of gear – he’s one of those traditionalists who prefers big, heavy film cameras (a Mamiya RZ for the shutterbugs out there) that require a tripod and lighting equipment – and off he went around central and western Victoria photographing the interiors of unique sheds, or the kind he wouldn’t see back home. He then returned the following year for a six-week shed sojourn, from Queensland through NSW to Victoria and across to South Australia.

Jasper says he was helped by contacts he had in each of these states who asked around, and before his arrival in each town he placed an ad in the local paper and a notice on Facebook. But what he found most effective was going to the local pub. “Once I’d explained my project to the locals at the bar, usually showing them a few images of sheds from other small towns, they would send word out and before long I had lots of sheds to photograph. It’s something really amazing about small towns in Australia – they pull together and everyone is connected.”

During his travels Jasper says that he met some real open and friendly characters and points out, somewhat disbelievingly, “Not a single person said ‘no.’ I guess I’ve got a trusting face, although a few owners wanted to stay anonymous.”

He photographed sheds decorated with calendar girl posters surrounding a vintage motorcycle, and garagenalia surrounding restored cars, while another shed houses several unrestored vehicles. There’s a shed decked out like a bachelor pad living room; another like a neat mechanic’s garage, and several have in them more tools than a hardware store. “One shed I photographed was full of Penny Farthing bicycles; another had a climbing wall in it, and one had a single engine airplane.” 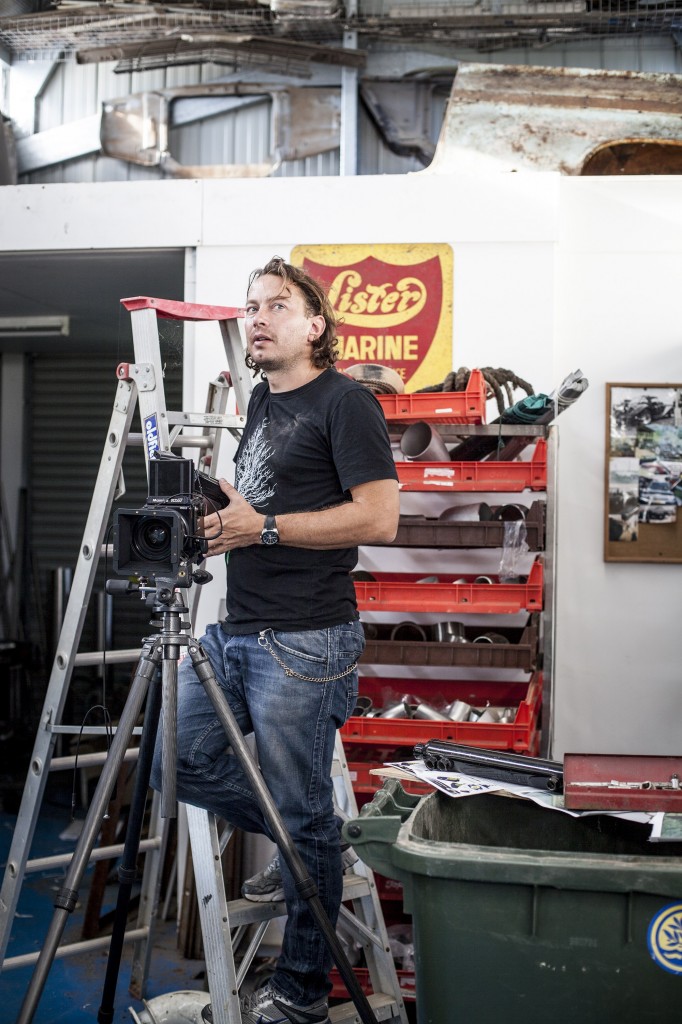 The overwhelming theme Jasper noticed was that, “It was a very male thing. The only woman’s shed I did find was owned by an English woman and it was her space for doing pottery, but it didn’t work as a photo.”

The shed as a photographic subject is nothing new. In the mid-1990s Mark Thompson’s two successful paperbacks Blokes & Sheds and Stories from the Shed featured black and white portraits and short articles about the many uses made of these backyard dens. Photographer Andrew Chapman has had two books published on shearing sheds: Woolsheds and Around the Sheds. Architect Ross Brewin took simple exterior shots of sheds in various states of disrepair for his 2013 exhibition and accompanying book 49 Sheds, while photographer Craig Wetjen’s striking portraits of men inside their sheds was featured in Issue 1 of ManSpace earlier this year.

Jasper White’s approach was to photograph shed interiors using a standard lens mounted on a tripod at eye level, as that would depict the spaces as most people would see them, but minus the owners. “I wanted the observer/reader to not be distracted from the space, and I wanted the viewer to work a little harder, and have to go away and imagine who the owner might be and relate to the space in a different way. Every time I look at the photos I find something new in there, and I like this idea.”

During his travels in Australia the London-based photographer captured 100 sheds on film, many of which will feature in his book titled Man Caves to be published by Thames & Hudson and released in time for Father’s Day this year. Jasper has dedicated the book to Pete Walter, his sister’s husband who passed away last year aged just 33.

“He was the one who willed this book to happen,” says Jasper. 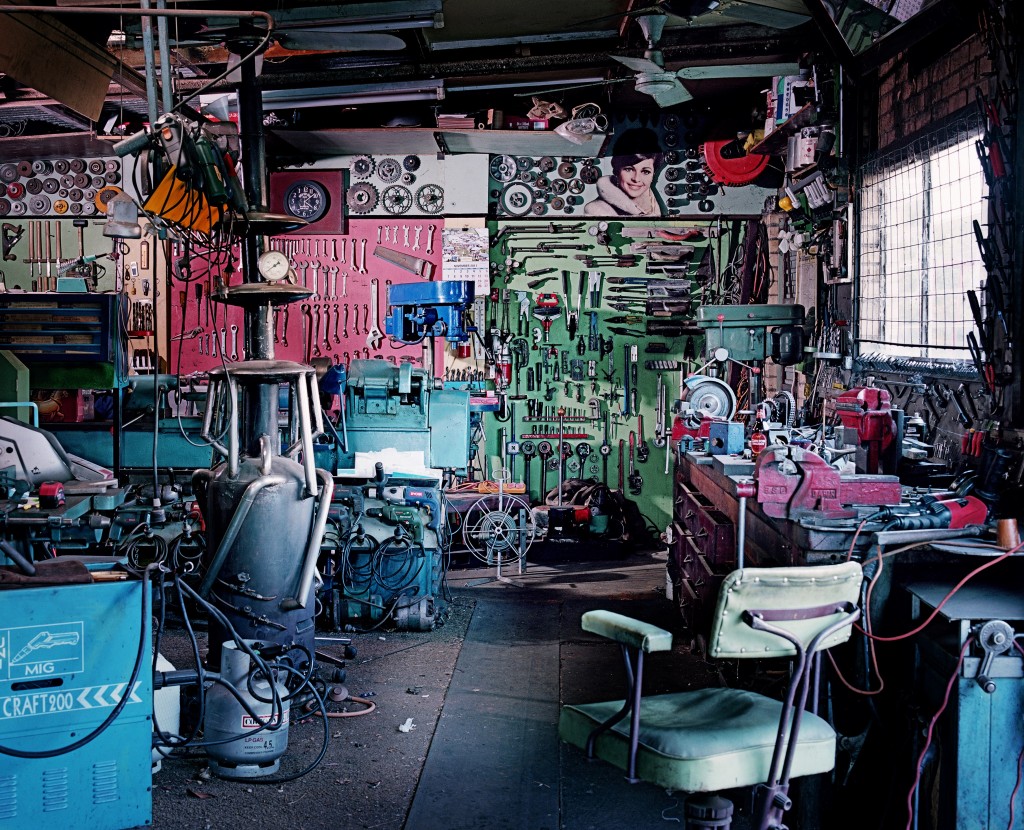 Jasper was particularly drawn to shed interiors that he wouldn’t find back home in the UK.

“He took me to the first shed for a beer and when I showed an interest in it, he went around town asking everyone if they’d mind me having a look in their shed.

“When you first start a project it’s hard to see where it will go and it was Pete’s enthusiasm and will that made me see that a book could happen.”