Trending
You are at:Home»Hobbies»Collections»Collecting cards

The footy or cricket cards we once purchased as kids for cents are now worth more than a monthly wage. Ian Kenins reports.

This issue’s collectibles theme was decided by a nefarious looking character who approached me in the street a few months ago. It wasn’t a TV that ‘fell off the back of a truck’ that he wanted to sell, or some Rolex watches hidden inside his jacket. No, he had a handful of footy cards. Speaking like he’d had too much caffeine and was in a hurry for another flat white, he guaranteed me, “They’re from the 60s, mate. Gotta be worth a few hundred bucks, hey? Whadya reckon?”

The asking price from this incomplete set was a little optimistic, but selling sporting swap cards legitimately is big business. Seriously, there are individual cards now worth more than AFL or NRL grand final tickets.

For AFL card collectors the prized item is a Gary Ablett Sr card from the Ardmona Big League Series issued in 1982. The simple white-bordered card shows Ablett kicking a ball with little energy at a mostly empty stadium. It’s not the most expensive card on the market – that prize goes to a 1963 VFL Scanlens Graham ‘Polly’ Farmer card someone recently paid $7200 for on ebay. What makes the Ablett card special is the rarity of the set and the rarity of Ablett Sr’s Hawthorn appearances, in which he played just six games before embarking on his legendary career at Geelong. According to the website www.footycards.com, find a seller and you’ll get five cents change after handing over $800. 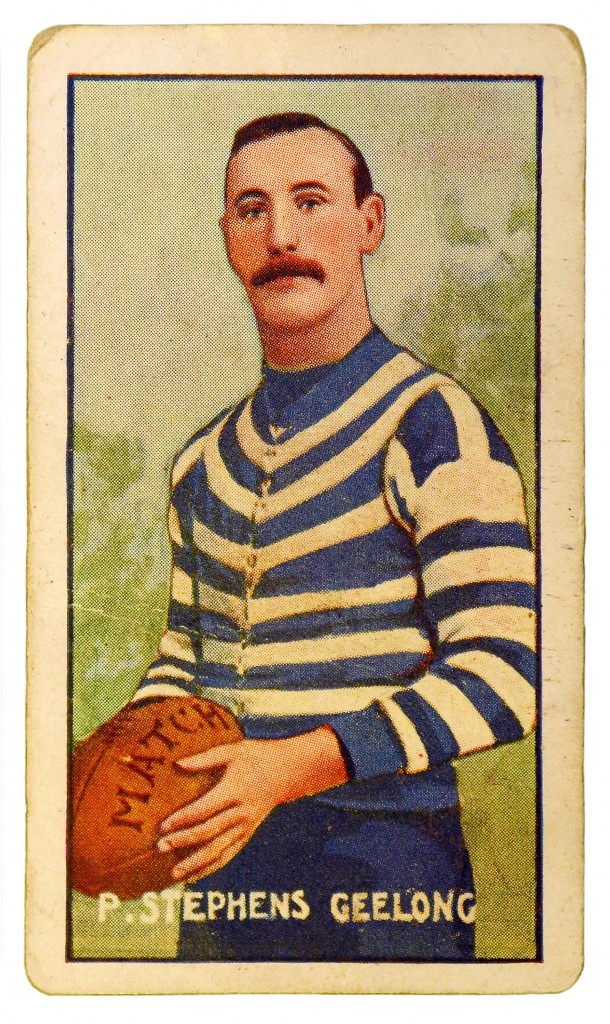 A card from the 1907 series of VFL cards released by the Standards cigarette company.

Peter Summers, our resident expert and owner of How Bazaar Antiques in Geelong, says, “Everything you can possibly imagine has been done as a card set – shipping lines, cows, flowers… but the sporting ones always sell first.” Peter says the demand for sports cards has been strong for a long time.

“Cigarette cards started around the mid-1800s when they started promoting smoking. You’d get a card in each packet of Wills and would get emphysema collecting the lot. Bubble gum cards started when cigarettes didn’t need a gimmick anymore because they had everyone hooked.”

When it comes to collectibles, age is important says Peter. “Anything from the turn of the last century is the most expensive simply because they didn’t make as many and because they’ve mostly disappeared.” But age cannot have wearied them. “Like most things in this business, pristine is best. The cards have to be in a slip of some kind or album. If they’re stuck in a book they’re worth bugger-all. We get books where all the cards have been glued in. I get lots of those but they’re not worth much money – maybe $10 to $15. 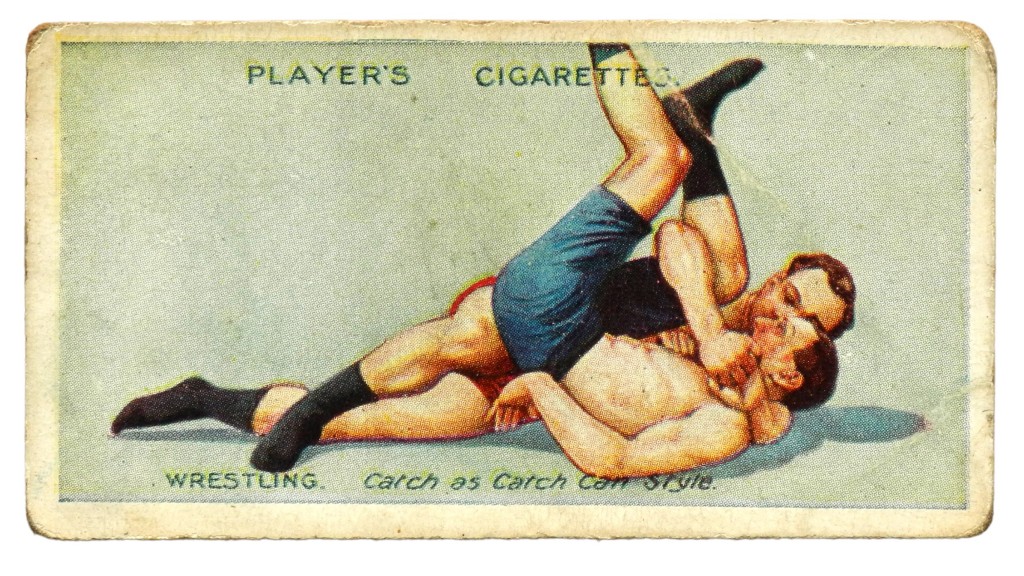 The Cradle Hold, No 8 in a series of 25 wrestling and ju-jitsu cards released by British cigarette company John Player & Sons in the 1930s.

The computer age has helped Peter sell sporting swap cards, but laying his hands on them is a lot harder these days. “Before the internet we would go to lots more houses because people didn’t know where to sell the items. Now grandpa dies and dad doesn’t know what to do with the collection but the grandson says, ‘We’ll put it on ebay.’ Now a kid can check for prices on his smartphone while he’s at the house.”

Somebody whose knowledge of sporting swap cards is encyclopaedic rather than electronic is Graeme Dickenson, who began collecting when he was a child in Melbourne’s western suburbs in the early 1960s. 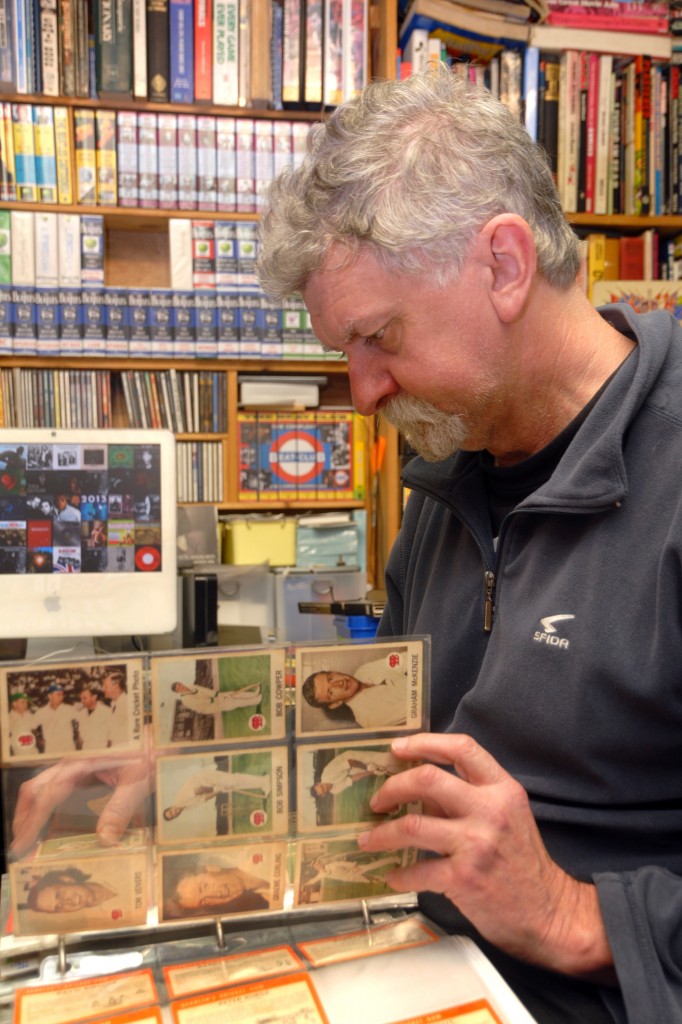 Collector Graeme Dickenson with one of his many albums of cricket cards.

“Because everyone barracked for a football team, and footy stars were heroes to us kids, we naturally bought them. Our family were all Melbourne supporters and we bought the whole set of cards from the local Coles store and had them framed and put on the lounge room wall.”

Graeme says the boom in football cards was in 1933, ’34 and ’35 when cigarette, confectionary and petrol companies all released their own sets until WWII, when rationing curtailed many non-essential pursuits.

“They came back in the 1950s,” says Graeme, “And then Scanlens (the chewing gum manufacturer) brought out football, rugby and soccer cards in 1963, but the soccer ones only lasted for three years before coming back in 1978.” 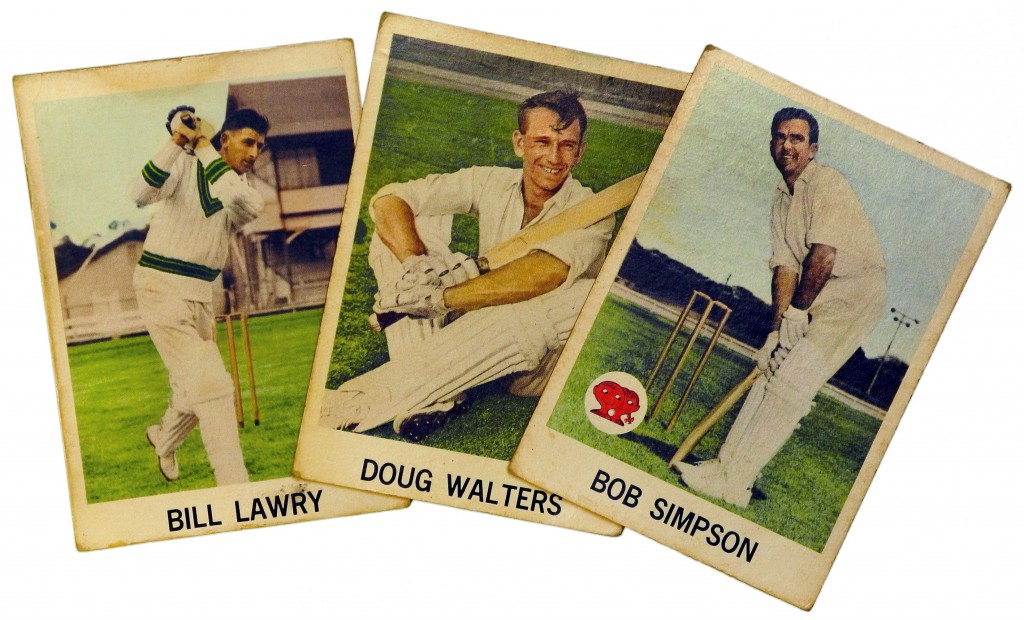 Australian legends from a set of 1965 Scanlens cricket cards.

In his adult years, Graeme says it’s the graphics of vintage cards that appeal to him. “That’s why I like looking at them probably more than other collectors do. They’re like a timepiece as many of them are photos that were altered or hand-painted with blacked-out or eclectic backgrounds, and sometimes I’ve seen the original photo in an old magazine. This makes those cards more interesting than the ‘perfect’ ones that come out today. You look at an old card and think ‘this is an amazing thing – someone has spent a lot of time doing this’. I’ve often wondered where the original paintings for these cards are. Do they still exist and if so, who has them?”

What hasn’t changed for Graeme since his childhood is the thrill of completing a set.

“At school we were always trying to collect the whole set, even if that meant swapping several cards or more for just one. It’s still pretty exciting today. Sometimes in the car on the way home from a card fair I’ll say to my brother, ‘I completed three sets today.’ The funny thing is, once you’ve got the whole set they go in an album and on the shelf and you soon forget about them. It’s the sets you don’t have that you continually look at and think, ‘Gee, I’d really like to get that last card and complete this set.’” 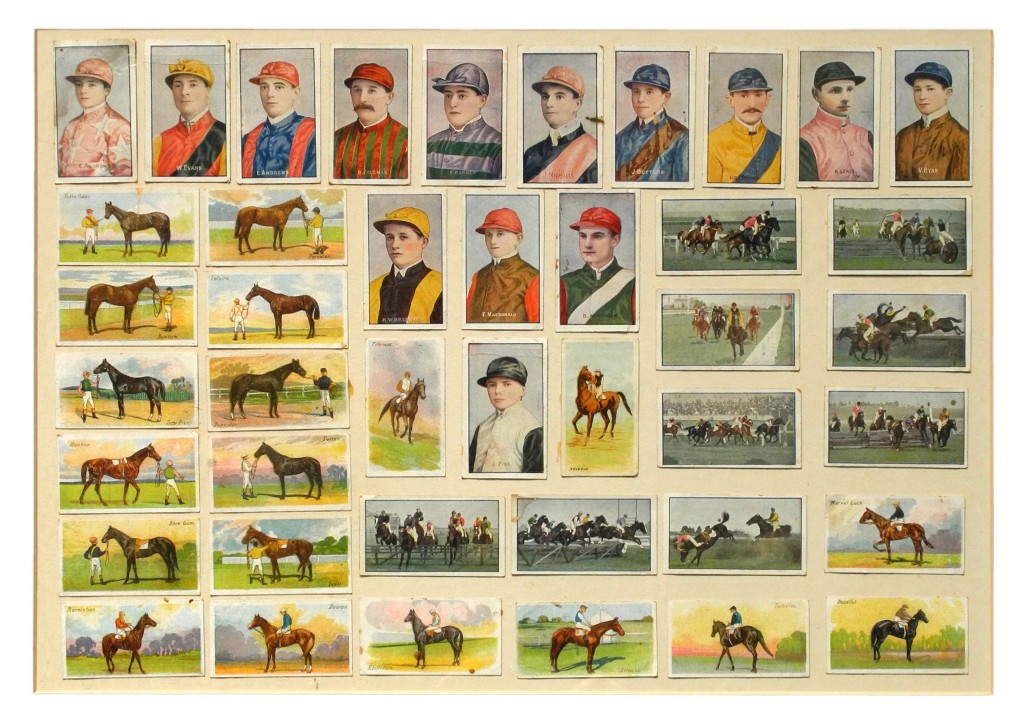 Cigarette cards from the 1930s featuring jockeys, including Jim Pike (centre in B&W silks) who rode Phar Lap to many famous victories. Mounting and framing the cards has greatly diminished their value.

In a purpose-built and well-protected shed in his backyard, Graeme has, among many other things, 160 albums of sporting cards, with each album containing several sets. On weekends, he and his brother John (who’s treasurer of the Australian Cartophilic Society) attend up to nine weekend garage sales and most card and collectible fairs even though, “You don’t have a lot of success at garage sales.” But one day, some ten years ago, he did get lucky. “I found a set of Hutton’s Pies footy stickers, which are something of a Holy Grail for collectors and worth about $1200. I paid 50 cents. They were stuck in a book and when I got home I started picking at them and they all just peeled off and were perfect.”