In a day and age when goods are produced for mass consumption, it’s fairly easy to decipher between factory-made and hand-crafted.

There’s no comparison in my eyes and when it comes to art, I’d much rather own a one-off piece than something that’s been re-printed a thousand times. It seems I’m not the only one either as a movement towards hand-painted signs continues to gain momentum around the country.

In order for this movement to reach its full potential, some incredibly talented people are required and TJ Guzzardi is one such artist that fits the bill.

TJ paints custom signs that are easily recognisable to the trained eye. Over the years he’s developed his own style which is uniquely different to other sign writers and it is an art form that he taught himself. He was immersed in the hot rod scene from an early age and was always fascinated with cars.

His dad was a mechanic and owned a hot rod shop in Melbourne’s north-west so TJ and his siblings were accustomed to having unique creations around them all the time.

“We use to go to rod runs and Rock ‘n’ Roll shows so we were brought up with the culture in our veins. We didn’t know any better or anything else because it was around us all the time,” TJ explains. 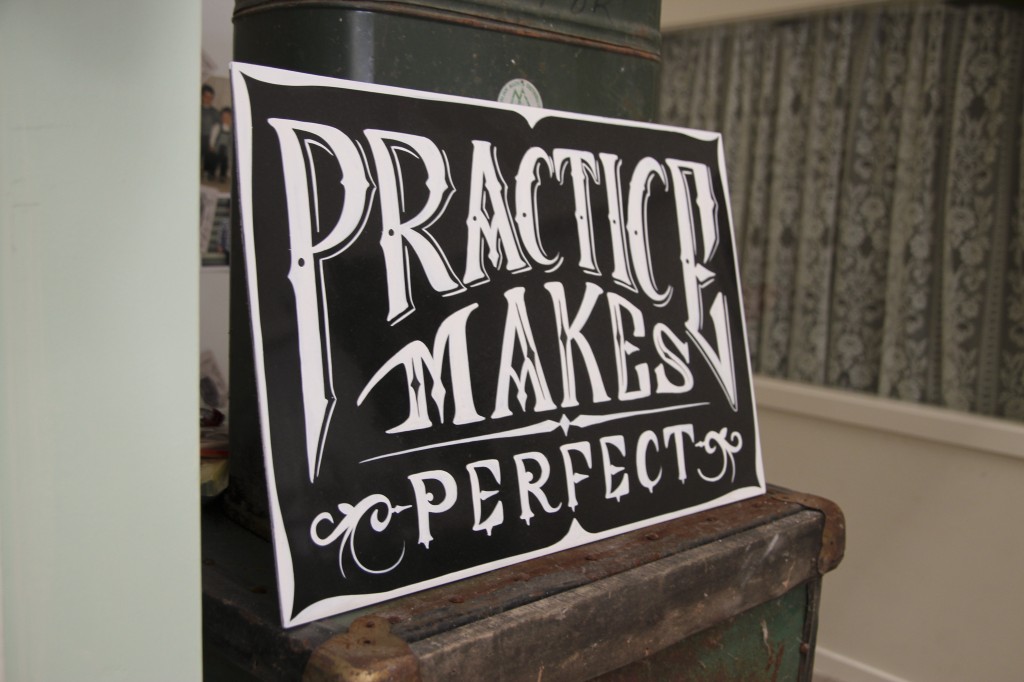 Unlike many fathers before him, TJ’s dad didn’t want him to follow in his footsteps. He didn’t want his son to be a mechanic. The attraction was strong though and TJ knew he wanted to do something in the custom car field, without actually building the cars.

“I pin striped one of my dad’s hot rods and some of his clients saw my work. They asked if I could do their cars and I suppose the word got out from there. I was only 15 years old at the time. I then got into lettering which was difficult and I found it hard to motivate myself to get into… but I did.

“I learnt all of this myself because it was something I really wanted to do. I just practiced at home and continually pushed myself to get where I am now. It wasn’t really a career choice as such so I found that I really had to drive myself. Nobody else was going to do that for me.”

It seems his drive placed him on a steady course as TJ has forged a career out of something that he not only loves but is insanely good at. His work is as unique as it is varied and during my visit he was putting the finishing touches on a nail salon sign and a Harley Davidson helmet. 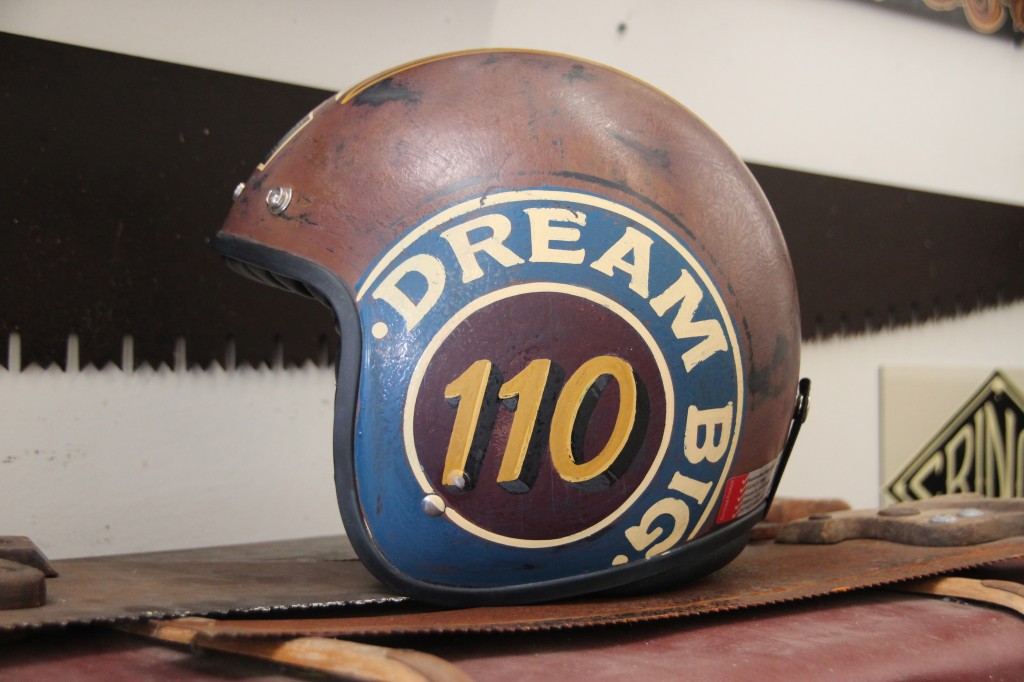 It would be hard to decide between wearing this for everyone to see, or hiding it so it couldn’t be damaged.

His studio or ‘cave’ as he refers to it, takes up the better part of the bottom floor of his factory in Tullamarine, Victoria. It is located in an industrial park but it’s off the main street so it’s well hidden from passers-by which suits TJ just fine.

“I close the roller door to get away from the world and just concentrate on my craft. My friends know that I like to hide in here though so when they can’t get in touch with me they generally know where to look,” TJ laughs.

It’s an eclectic space and very much reflects its owner. The walls are lined with hand painted signs, paint tins, cutting saws and a collection of vintage trunks among other things.

“I didn’t plan this space. It begun with my original work bench and then I started adding stuff around it. Once I bought the cash register it was all over from there – I just kept collecting. A lot of this stuff I’ve found around town or during council clean up. As long as it suits my style and my place, I’m happy to collect it. My favourite things are the trunks though and some are brand new. I don’t think some people really know what they’re throwing out. 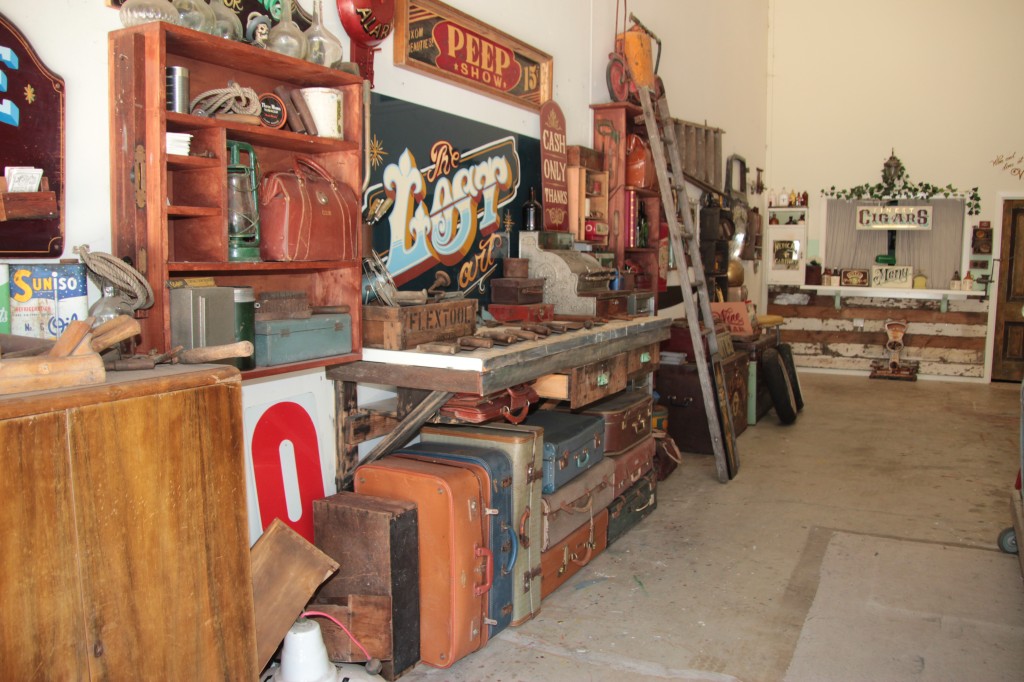 “As long as it suits my style and my place, I’m happy to collect it.”

“I like the idea of being able to dress the place up to make people feel like they have stepped back in time. A lot of the new signs I paint are painted to look old. It’s a style I have developed over the years. Some of the stuff looks like it’s been pulled out from the ‘60s or ‘70s.

“Every night after the kids go to bed I come here and either continue to paint or just stare at the main wall to garner inspiration. Sometimes my wife will join me and we’ll just hang out on the couch. As much as it is my work space, it’s a family space too.

“My two boys run around in here and they’re always fascinated by any signs or collections that turns up. I suppose like when I was a kid, they’re surrounded by something unique and I hope they have fond memories of their dad and his work as they get a bit older, as I do with my dad.

“My wife pushes me and she’s very creative too so I’m really fortunate. We bounce off each other a lot and it helps us to both come up with fresh ideas.”

TJ isn’t sure if it’s just a phase that comes and goes but at the moment – especially in Melbourne – this style of sign is ‘in’ which he’s grateful for. Thankfully he was doing it before it became cool though because it has allowed him plenty of time to gain a good reputation.

TJ’s style is certainly popular at the moment.

Most of his work is generated via word of mouth and media and his steady hand and creative mind work in unison to paint signs for a range of restaurants, cafés, food trucks, tattoo shops and pubs.

“My clients have generally seen a lot of my work so they already have an appreciation for what I do. They know what to expect which is nice because they allow me to put my own touch on things.

“I like to go to the site where the sign will be displayed to get a feel for the space to work out best colours and materials. I think it’s important to build a good relationship with my clients and I’ve met some amazing people and made some long-time friends along the way. It’s pretty special because I wouldn’t have met a lot of these people if I wasn’t in this line of work.

“Some people want a rough illustration which I’m happy to do but I’ve never really been a fan of providing a full-coloured sketch because I change my mind a lot. I like to just go with the flow when I’m creating something.”

Unlike digitally produced signs, TJ can’t simply drag the eraser over botched lines so plenty of time goes into each piece. And while most of his clients are patient, TJ explains that some don’t like to wait… until they see the final product of course.

Everything TJ paints is free-hand and it’s pretty hard to comprehend when you take a close up look at some of his Von Dutch style pin striping. And similarly to his space, his pin striping isn’t planned out. He allows it to evolve as he goes along and I suppose that’s what makes him and his art work so unique. Plenty of practice helps too. 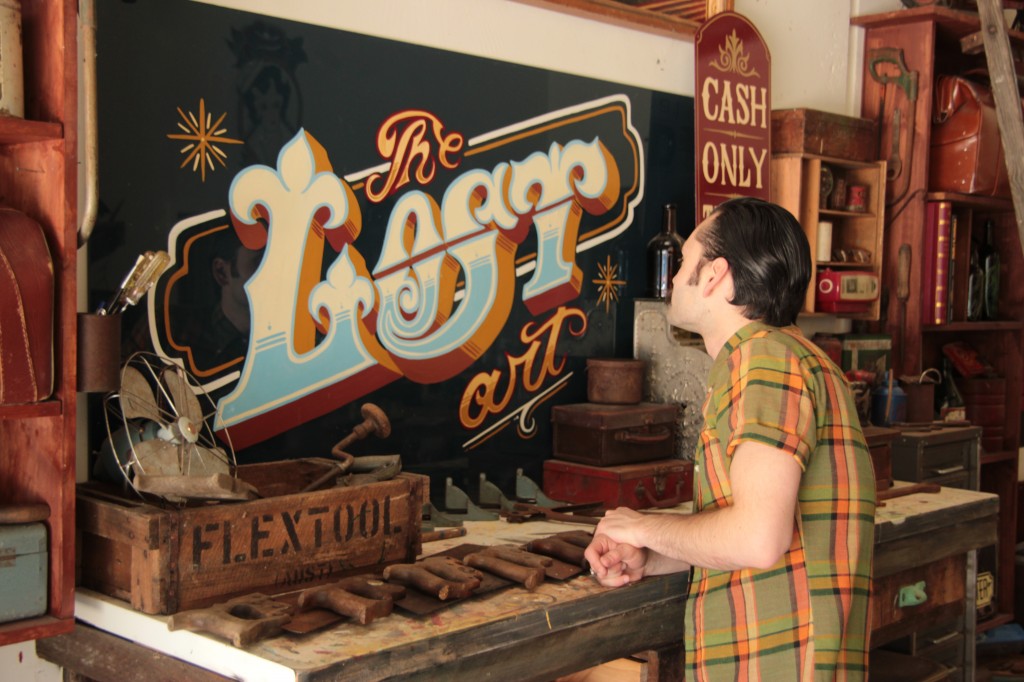 “Every night after the kids go to bed I come here and either continue to paint or just stare at the main wall to garner inspiration.”

He paints between five and six days a week, ensuring he maintains at least one day off to spend time with his wife and two boys. Between drying times he’s on the lookout for interesting materials to paint on and nothing really appears out of bounds. Old cans, floor boards, suitcases and hand saws are all fair game and painted in a style that suits their age or orientation.

“When I’m not doing a commissioned job I just paint for myself and add any finished pieces to the cave wall. If someone comes in and likes something then I suppose it’s for sale but I don’t paint with profit in mind.

“I paint because I love doing it and I love being able to look at my creations on my wall.

“This is my life and I’m fully aware that a lot of artists can’t make enough money to do what they love full time. I won’t lie, it is hard and I have to push myself but if you have it in you then it’s easy. I guess it could be considered a dying art but as long as people appreciate it, I’ll continue to create it.

“Eventually, I hope to be able to paint Guzzardi & Sons on the front of the building… they’re already starting to sketch so I’m optimistic.”