Unless you’ve had reason to go there, the city of Albuquerque, New Mexico is perhaps best known as that place Bugs Bunny should have stopped to get his bearings so he didn’t keep getting lost. Situated within the northern, upper edges of the Chihuahuan Desert eco-region, it is a relatively small city (by US standards) boasting hot summers and chilly winters.

While it may not be the most glamorous city in the US, or attract large numbers through industry and tourism, it is home to one of the world’s most legendary gymnasiums – a private facility frequented by a number of the best mixed martial art (MMA) athletes in the world; including Australia’s own Kyle Noke.

There’s a fair bit of a difference between his home town of Dubbo in NSW and the bright television lights of the UFC (Ultimate Fighting Championship), but it is one that Kyle has been able to bridge, successfully holding his own in the premier MMA competition in the world.

For those who are not familiar with the concept, MMA comprises disciplines from karate, jujitsu, boxing, kickboxing, grappling, wrestling, sumo and other sports, with competitors battling it out under very strict conditions and regulations. Its history actually dates back to the ancient Olympic era, but it was the formation of the UFC organisation in 1993 that brought it into the modern day. 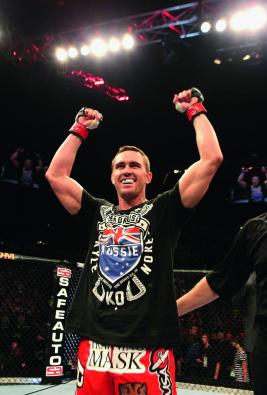 The first few years of UFC in the US arguably did the sport more damage than good. Selling the concept under the slogan “There are no rules” created concern for fighter safety and, after five years, the competition lost its television broadcaster – effectively signalling its end.

However, in 2001 the UFC brand was bought by new owners who worked hard to legitimise the sport through high regulation and safety, now producing an event that attracts an audience of millions through television and live competition. While it may not be everyone’s idea of a night out, a recent broadcasting deal rumoured to be around the $100 million a year mark suggests it has indeed got a solid market.

Kyle’s journey is almost as long as the trek from Dubbo. It involves a sporting background, plenty of hard work and training, a friendship with an iconic Australian, and a reality television program – not the standard mix of ingredients to make your way to the top.

“I’d spent a few years playing rugby – both league and union – in NSW and then up to Queensland,” says Kyle. “I wanted to find something physically active to do between seasons and a friend suggested trying mixed martial arts. I went along quite happily but not knowing that much about it – it’s fair to say I fell in love with it almost straight away.”

Guided by the expert knowledge of Dan Higgins at Integrated Mixed Martial Arts, Kyle quickly moved through the ranks, participating in his first bout in 2002. Aside from his techniques and training, Dan also introduced Kyle to one of Australia’s biggest MMA fans – Steve ‘The Croc Hunter’ Irwin.

“Steve was a massive fan of MMA and liked to have guys around who he could train with,” says Kyle. “Dan was already working for him in security and the opportunity came up for me to join as a bodyguard.

“It was a great job. Steve was this international face – I mean, he was as well-known in the US as he was in Australia – and there were people who would come to Australia Zoo just to see him. It became so difficult for him just to walk from one place to another without being swamped. He was a big guy and could easily handle himself, but he was also a very friendly and welcoming guy and people would try to stop him and chat for ages. Our job was more to diplomatically allow him to get on with his day in the nicest possible way – and to be there in the event if something did go wrong.

“The other part of it was looking after the kids as well. Back then, Bindi and Bob were pretty young and Steve wanted them to feel safe and secure yet still be able to get out and meet people and spend time at the zoo.”

The two became good friends, with Kyle teaching Steve MMA techniques while training with him, and Steve showing Kyle his passions for nature, animals and the outdoors.

“They were some of the best times of my life. Steve loved to learn and he wanted others to learn, so I really got to know him well – far better than a normal employee would with their boss. He showed you that you could get what you wanted from life if you worked hard enough and fought for it.”

Gradually Kyle got more professional bouts under his belt, travelling to America on a number of occasions to train and fight with the best. These trips were often paid for by Steve as he wanted to see his friend succeed.

At the time of Steve Irwin’s passing, Kyle was training interstate.

“It was devastating,” he says. “He was so strong – physically and mentally – that I couldn’t believe it. I have no doubt that I wouldn’t be living and competing in the US if it wasn’t for Steve. He supported me personally in so many ways.

“I kept working with the family for another 18 months or so, but wanted to see how far I could take my sport; so that meant a full relocation to America.”

Serious training and continued success in the ring led Kyle’s management to put him forward as a contestant for the American reality TV program, Ultimate Fighter, where contestants work through a tournament format with the best being offered spots in the UFC series.

“Ultimate Fighter was a great step-up for me and the perfect opportunity to show that I could compete at the top,” says Kyle. “It’s just one way to get into the UFC, but it was one that appealed to me and, obviously, worked.”

“There’s no quick path to becoming a UFC fighter – and neither should there be; no one wants to see someone in the ring who is not capable of holding their own.

“It’s like any martial arts or combat-based sport – you need to work through a process. You start at one level and keep testing yourself against stronger and stronger opponents and if you keep winning you keep moving through the system. And the best competition – in any sport – is when you have opponents of a similar ability squaring off.”

Since appearing in Ultimate Fighter, Kyle has entrenched himself in the UFC series; holding his own against the best in the world. Although he obviously belongs in the competition, in some ways it seems like a strange fit. Within the first few minutes of talking to him you pick up that he is not there for the glamour and glory; instead, he is there to test himself physically and mentally, just as his good mate Steve used to do. 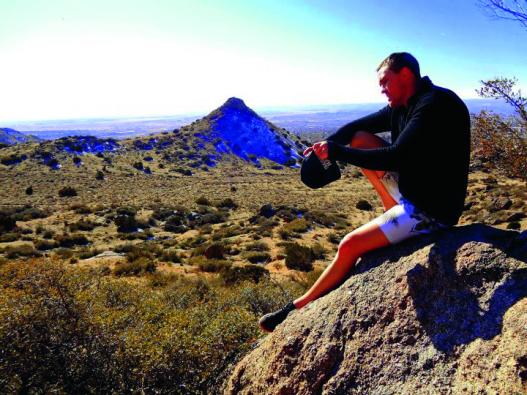 “I love the competition most of all,” he says. “I’m very grateful to be here, but I miss Australia a lot… let’s just that I know where home is. The simple fact is that the best competition in the world is here in the US – so if I want to compete in that then I need to be here.”

Like any full contact sport, competition is a gruelling event. Most fighters in MMA will look to compete roughly every three months, with many hours of hard work and recovery in between.

“A typical week involves training three times a day. That’s made up of specific fight training in the morning, followed by some strength and conditioning through the middle of the day, and then maybe a private lesson with a coach to go through some specific areas I want to work on.”

Which takes us back to the gym in Albuquerque…

“It’s a pretty special place. A lot of the guys in the UFC work from that gym, so there’s a great feel. Of anywhere in America, it’s the place where I feel at home.

“I won’t lie, the first time I walked in it was pretty daunting. But there’s good camaraderie in MMA, and once I got to the level where I knew I could genuinely compete with them I found it inspirational to be training with these guys rather than daunting.

“I had a great gym in Australia with fantastic people around me, but spending time in this place, with the best of the best around you, means that you push each other to the next level. It’s an old-school feel in a brand new gym.”