Trending
You are at:Home»Hobbies»A Clip, Shave and a Chat

The average bloke treats a haircut and a shave as a bit of a necessary inconvenience. That’s not to suggest that he doesn’t take pride in his appearance, but the process has become something closer to a general transaction.

Sure, you can argue that shaving at home is a logical progression in modern life, but what happened to the relaxed experience of a clip and a shave and some manly banter about life and sport?

Somehow, the ‘experience’ of having your hair done became the female domain and men joined the queues of chain hairdressers in shopping centres where you take a seat and wait for your number to be called like you’re sitting in Medicare.

But one young man in the western suburbs of Sydney is doing his part to bring back the men’s clip and shave. Nestled in the corner of his standard double garage is a barber shop – as traditional and authentic as you would find anywhere in the world. 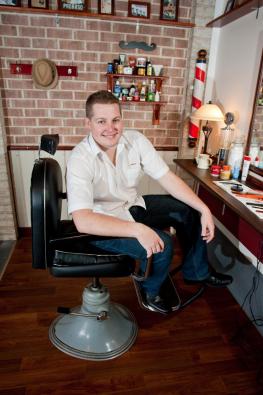 For the proud owner, Aaron Round, it’s something of a labour of love as he has been actively involved in finding all the pieces – or making them himself – in search of that perfect look. But let’s be clear, this is not just for look – oh no, this is a fully functioning purpose-designed space – even if it is in a garage and the man providing the service has a normal day job.

The barber shop takes up only a fraction of Aaron’s garage; with the usual collection of tools, general storage and gardening equipment sitting alongside it. The purpose-laid floor has even been measured out to allow space for a car to park in front of it (although that car is a Mini and therefore doesn’t take up a lot of space…).

So what makes a young man want to build a barber shop at home, let alone undertake the actual service?

“I guess the activity came before the space,” explains Aaron.

“Mum used to cut our hair when we were little, so it never seemed strange to get a clip at home. Somewhere along the line, I recall a time when I looked at her cutting my brother’s hair, and I thought: ‘I reckon I could do that.’ So I just sort of tried, and thought it was great fun.

“Then when I got my own place in Sydney – and Mum was still living in the Blue Mountains – my brother used to come to me for a clip. Understandably, my wife wasn’t thrilled about hair getting all through the house and the bathroom is quite small and difficult to use. We then started doing it in the backyard, but that can be pretty difficult with the weather and wind.

“Eventually I looked at the garage and thought that if we just had a mirror and a cheap chair we could get the job done. So I guess the actual garage location was more by elimination rather than careful planning.”

Feeling quite confident with the hair clipping, Aaron started to explore the old techniques of shaving using straight razors and double-edge razors. From there, the natural progression was to get into the lotions, creams and balms, which – not surprisingly – put Aaron deep into the ‘barber shop world’.

“Through my interest in the shaving side of things I met Frank from Belmore shaving supplies. He’s a bit of a guru with over 40 years experience, and really helped me understand the difference between types of barber’s supplies and explained all the different creams and balms. I still get a lot of my supplies through him.”

Aaron even ended up getting his barber chair from Frank; an original piece from the 1950s.

“He had two Raynor barber chairs leftover from his old barbershop,” explains Aaron. “He kept one for himself, but the other was looking a bit worn, so he was good enough to sell it to me.

“It weighs a tonne, but I absolutely love it – and it was probably at that point that I really started to think about turning this into something special.”

Armed with nothing more than a sketch pad, pencil and a few ideas in his head, Aaron sat down and started mapping out a design. From there, it was a case of finding various pieces or making anything not easily available.

“One of the great parts has been doing a lot of the work myself. Some of that comes from the fact that I’m not working with a massive budget, but I can honestly say that making little parts has just added to the whole experience. I get a real sense of satisfaction every time I walk in there.

“It all started with the chair. I got an upholsterer to do the actual seat part with the cushion and springs, but he gave me some leftover fabric so I could finish off the back and head-rest. The chrome footrest and arms I was simply able to polish up with wool scourers and they came up beautifully. And once the chair was looking good, I had something to base the rest of the design around.”

The large mirror was found out in Camden for only $10 (though the drive back was long and arduous so it wouldn’t break), the bench was an existing piece of timber Aaron’s father had from a kitchen bench and the panelling across the walls was purchased and installed by hand.

“I’m pretty lucky that my dad is a builder, so he was able to help me make sure everything was put together properly – you certainly don’t want the mirror to fall off halfway through a shave…”

Adding atmosphere to the space are shelves of pictures and small posters so you can relax in the company of Frank Sinatra photos, old shaving advertisements and other ‘manly paraphernalia’.

The most recent inclusion is the traditional barber pole – an iconic symbol of any barber shop, and a symbol of Aaron’s personal passion.

“I actually joined a woodworking club to make that,” he says proudly. “The wood is Oregon and I sourced it … from my brother’s patio. It started as a squared-off support post and through the help of the club I put it on the lathe and shaped it, then stained it, painted it and have only just mounted it on the wall.”

And there is always something new to be done. Aaron has managed to get hold of an old porcelain sink which he will get installed as soon as possible.

“Until I get hot water in here I have to run the towels under the laundry taps and pop them in the microwave – you can get a good head of steam doing it that way, but obviously I’m looking forward to having the proper sink put in.”

Aaron has a good number of ‘regulars’ who come by, helping him develop his craft. He has taken a number of tutorials with experts and says that there are still many manuals out there to help improve. Equally, YouTube has proven to be more than useful for techniques and tips but, ultimately, practice makes perfect and that’s where friends come in.

“Friends have brought friends, so I have a decent sized group to keep busy. I do think that one day I might open a commercial business – I can even visualise a little shopfront in the Blue Mountains – but that will be some time down the track.

“In Australia, you need to do a Certificate Three in Hairdressing – and while I have no problem in taking on a formal qualification – it means that I would have to complete units in areas like women’s cuts and colouring, and that seems a little unnecessary for what I want to do. In the US you can actually do a qualification that allows you to trade just as a barber. In fact, if you want you can go on to further training and become a Master Barber.”

Ultimately however, it’s a matter of balancing the mortgage and other life costs, so any plans to enter a formal three-day-a-week study program will have to be put on hold.

For the moment Aaron is happy to keep developing his craft; having fun along the way and providing an ‘old-style experience’ to those who come.

“On any one night I could get four or five guys in – and the great part is that they hang around and make a night of it. We get the deck chairs out and it feels a bit like a committee. Magazines are out there if people want to have a read, but more often than not, the guys will sit around and chat. It’s really pleasing.

While Aaron is now confident with all the equipment, there are still times when he pulls out a fresh long razor blade and senses a little movement in the chair.

“I tell them that as long as they stay still everything will be fine,” he laughs. “There can be some nerves when a guy comes in the first time, but generally they sense the confidence I have and then relax pretty quickly.

“It’s a place where ‘that was a close one’ is taken as a compliment. Everyone who has come in has come back, so it can’t be too scary.”