Trending
You are at:Home»In The Drink»Beer»Cold beer, warm nights

Some look back on it as a rite of passage; a time when they were becoming a man.

Others justified it on financial means or claimed it was ‘just for fun’.

No matter how you rationalised it, we’ve all had a go or helped a friend with their endeavours.

Yes, we’re talking about home brew: that $50 ‘investment’ that pays for itself in the first few cases. Or so we told ourselves at the time.

Think about it mate – it comes in at under 50 cents a bottle. At that price anything tastes good!

Even those who managed to get a handle on it still had the odd failure; particularly when the weather was a little unkind. Too cold and the brew sat there less active than a koala after feeding time – too hot and the yeast ran riot and ruined everything. And then there was the cleaning…

For Reece Baldwin it’s an all-day exercise, but well worth the effort.

“I guess it all started a few years back when I was working in a cocktail bar in Darwin. They had this beer that was completely foreign to me called Coopers and I was blown away,” says Reece.

“Of course, everyone knows about Coopers now, but there wasn’t a great choice of beer in the Northern Territory at that time so it was pretty new to me. So when I started to learn about it a little it got me thinking about these fantastic local beers: South Australia has Coopers and Western Australia has Little Creatures, even XXXX is synonymous with Queensland, and yet all we had in the Northern Territory was NT Draught, which is really just created for tourists in large two litre glass bottles (otherwise known as the Darwin stubbie).

“So, essentially, I decided that I wanted to make my own beer. And while I don’t exactly have a brewery that could supply the whole population, I thought having a little one at home would almost be as good.”

The whole process takes the better part of an entire day and is run largely from Reece’s garage.

“It begins by measuring out the amount of malted grain required and then milling it – which is essentially just cracking it. Then I move on to the mashing – which is when I put hot water in with the grains – and because I’ve cracked the grain, the hot water will get in to the starches inside the grain. That hot water breaks down the starches into smaller sugar chains.

“The temperature I run that at depends on the style of beer I’m making. Generally I’m working at about 60 to 65ºC and can even put it through a ‘step-mashing’ process where I run it through different temperatures at different times to break down the starches to different levels.

“I leave that mash for about an hour in a modified esky that I made. This esky has a false bottom in it which allows the sugary water to fall through. I then take that sugary water – known as wort – and draw it out.

“Hot water is then slowly run over the top of the grain bed again for about an hour. The hot water then draws out more of the sugar.

“I then take the wort and put in the kettle for another hour and during that time I start adding hops. The amount of hops I I add to the kettle depends on what type I’m using or how bitter I want it – or even if I’m looking for a particular hop aroma or flavour.”

From here, the brew needs to be brought down to temperature gently before yeast can be added. Many micro breweries will run water over the mixture to passively cool it, however that’s not really an option for Reece as the cold water in Darwin can sometimes come out of the tap at over 30ºC.

So what’s the answer? Wet towels perhaps? A cooled room?

“Actually, I just put it in a sealed water container and throw it in the pool. It takes about six hours, but that gives you some time to go out and get some other things done with your day.”

Once the brew has cooled down to approximately 20º it is transferred to the fermenter and yeast is added to the top. This is then placed in temperature controlled fridges and left for as long is required for the type of beer being made.

“The fridge range is somewhere between 10 to 25º depending on the type of beer you’re making. For example, I’d set it at about 23º for a good wheat beer, and then you just leave it till it’s ready. A wheat beer could be as quick as 12 days but a big ale might be left for six weeks.

“Then I simply transfer it to a keg and run a tap from it.” 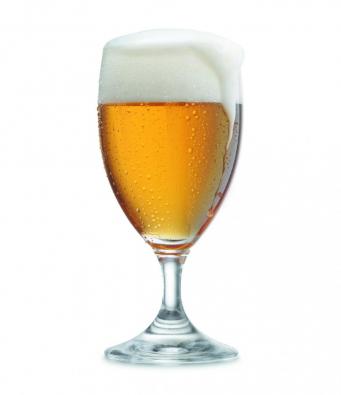 At first explanation the whole process seems a little daunting – and it certainly makes my days of opening a tin from the brew shop and stirring it with sugar and some boiling water feel a little primitive – but it is an art Reece has got down to a fairly well-oiled procedure.

That’s not to say he doesn’t have problems, and there are obvious complications in making a beer from scratch in a tropical climate.

“I’ve had issues with mould because of the humidity and high heat – so when you clean things you have to clean them really, really thoroughly. You always think you do, but then you do get a small mould infection and the whole batch is ruined.

“And then there can be issues with equipment. When I was living in Alice Springs I had a fridge fail and – typically – it happened when I’d decided to make a special Christmas ale with a whole lot of expensive cherries added to a German wheat beer. The fridge then decided to break on a day when it peaked at about 40º and completely ruined the beer.”

Equally complicated is getting the ingredients. Reece gets his base supplies trucked across from Brisbane as the grain and type of hops he prefers to use are largely unavailable in Darwin.

The set-up is a mixture of ex-commercial equipment with some old-fashioned ingenuity.

“I have a friend who owns a pub so I was able to get my hands on some old kegs that were no longer in use – and even then they needed to be welded back to be in good enough condition to use.

“I also had to build a frame which holds all the equipment and then run a pump that recirculates all of the equipment. Then there’s also the drinks cooler I modified by putting in a false bottom so I can do the mashing more effectively. It’s not overly complicated stuff; the real problem is that I’m very limited in the quantity I can make.

“It’s a matter of space with the fermenters and fridges. I only make about 20L to a batch and in all honesty, it wouldn’t be that much more work to make double or triple that amount; but that’s all I can handle at the moment.”

Not surprisingly, there’s never a shortage of friends willing to help on brew day; with payment accepted somewhere between 12 days to six weeks.