When one retires, there generally comes a time when the question is asked, “What should I do today?” ManSpace catches up with a resident of Gold Coast’s Hinterland who found a fairly grandeur way to answer it.

Over the past two and a half years ManSpace has visited a lot of sheds, garages and homes but personal villages are, well, not so common. But if you had the dream, desire and resources, why wouldn’t you build one?

Tery retired in 2003 after being fed up with his job. While it wasn’t an easy process as he was a business partner in a company that he started in 1978, he felt the time was right. He was beginning to lose patience with his clients, for whom he sought cars as a broker, and the passion was no longer there. As the old adage recites, it was a case of ‘quit while you’re ahead’. 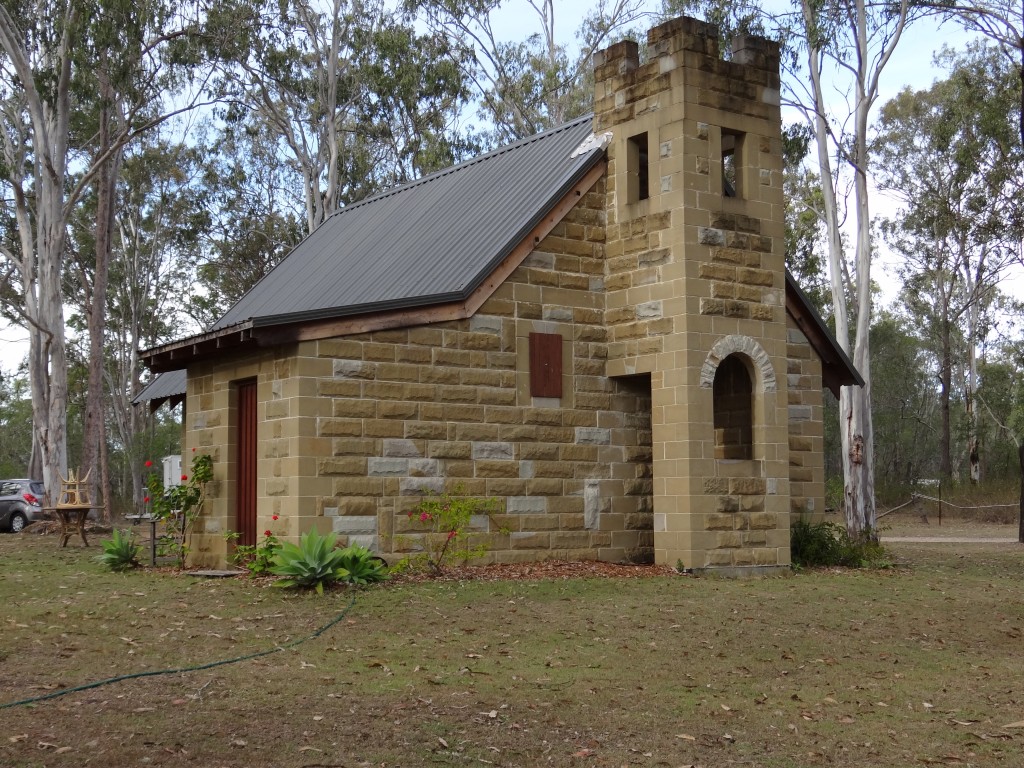 Tery has always been drawn to little old churches and this particular one was the first building, in a line of many, to form his own little village.

“I remember coming home and wondering what I would do with myself because I was only 53. I purchased my house in the Gold Coast Hinterlands in 1999 and it was 95% finished when I bought it. After renovated the last 5% I wanted something more,” Tery explains.

For those that are unaware, the Hinterland is far removed from what the Gold Coast is renowned for – tourists, beaches and warm weather. The elevated region is blessed with acres of bushland, river headwaters, national parks and best of all, serenity.

“It’s beautiful up here – I’m surrounded by bush and birds so it’s very secluded and peaceful. And it’s my bush so nobody will come and cut it down. I was set on about 50 acres when I bought it but after retiring I subdivided the property and now I’m left with 15.

“I always wanted a little church on my property. I’m not very religious but I always liked the look of little old churches. I’ve got an English bent about me because my grandparents are from there so perhaps it stemmed from that.”

Tery quickly discovered that his dream of having a church next to his house wouldn’t be a straightforward task. 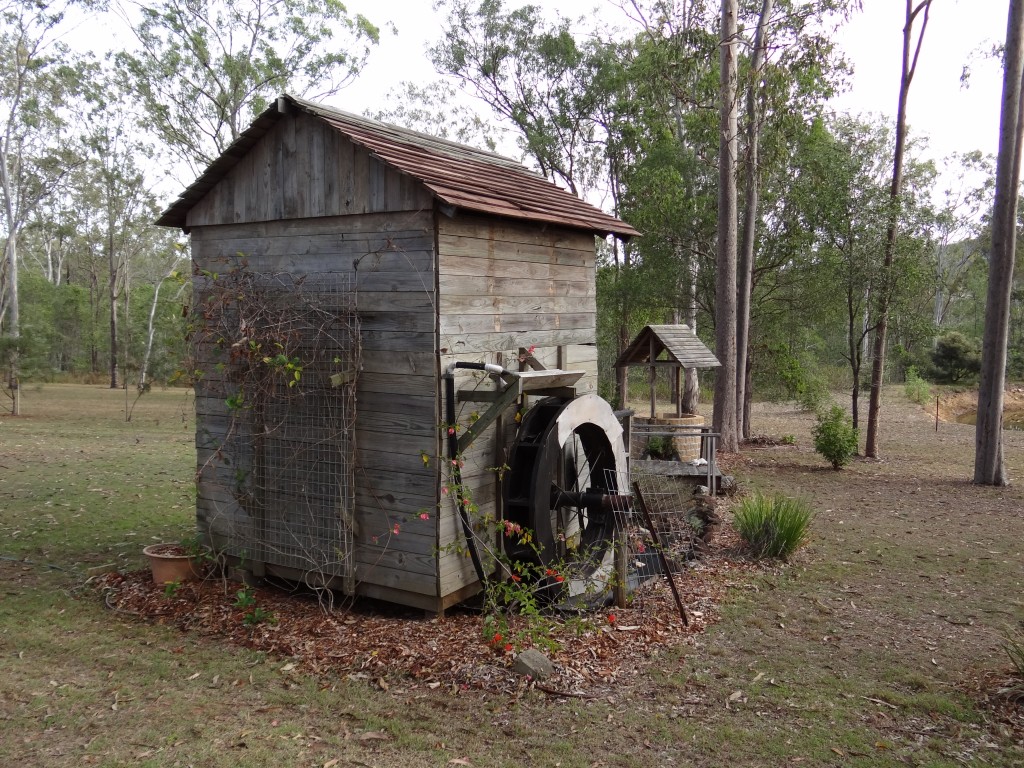 A waterwheel and wishing well came to fruition after Tery painted them to life in his little artist’s studio.

“I looked around for a second hand one but quickly discovered that one made of timber was going to be hard to relocate because of the sheer height. I also found that most of them had been ruined by the time they come on the market anyhow. So I came to the conclusion that I would build my own. I didn’t want any maintenance so I knew I had to build it from sandstone.

Turns out sandstone isn’t so cheap and a couple of quotes came back around the $200,000 mark. Add the cost of a stonemason on top of that and it just wasn’t viable.

“I almost gave up and was going to build it out of besser blocks but then I came across a little sandstone quarry and it all sort of fell into place. A son of a friend of mine offered to build it for me as he had experience and he did a fantastic job – it really suits the house. We had already bought the windows from a church five years before so we built the church around the windows, as you do.”

When the church plans went into council for approval they told Tery that he couldn’t call it a church because a church was a public place of worship. He told the architect, who submitted the plans, to call it a private chapel but they said there was no such thing as a private chapel in Beaudesert. So it eventually got approved as ‘a shed with a bell tower and a vestry’.

“Believe it or not but I’ve actually had four weddings and a funeral at the church. That sounds awfully like a good title for a movie doesn’t it?” Tery laughs.

“While Peter was building the church I had to fill in some time because he was busy and I wanted to be as well so I thought I’d build a pub opposite it. I know it’s a weird mix but I’ve got a weird sense of humour like that. It worked out well though because we could give each other a hand during construction.”

The pub would easily look at home among an English village along a cobblestone road. It’s incredibly authentic and one of the wonders of this place is its ability to make you feel as though you’re somewhere else, incredibly far away. 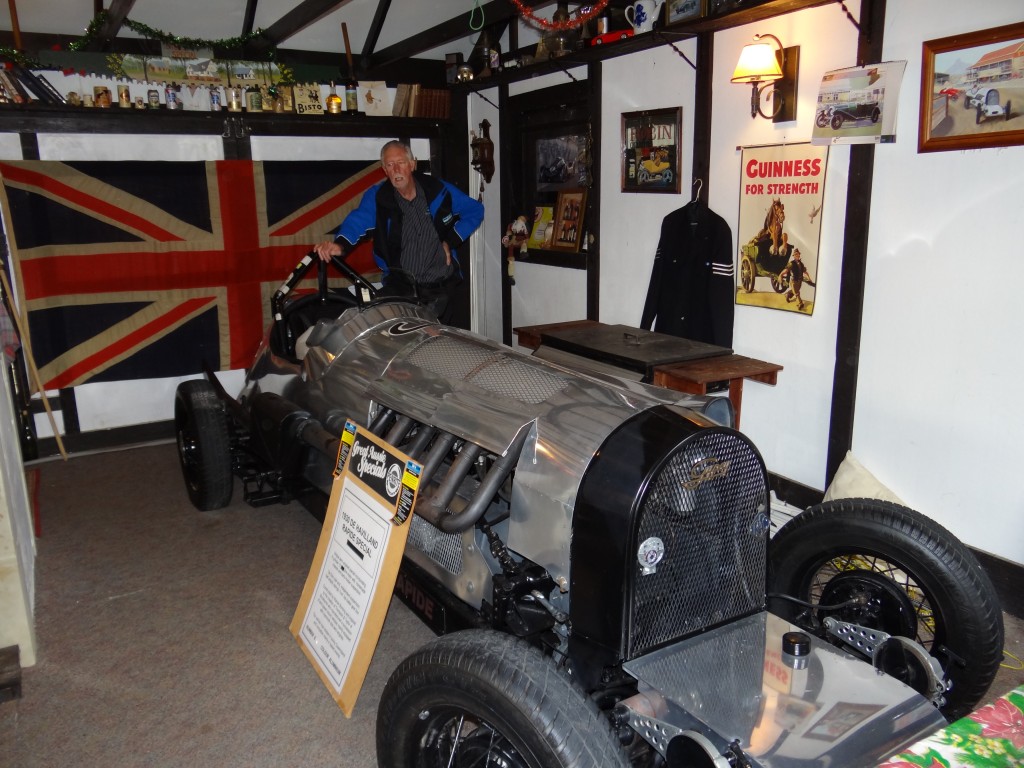 It’s not often you see a car in a pub, especially not one like this homemade race car.

The pub acts as the headquarters of Man Cave Club International – a club Terry and some friends set up after a boy’s trip away to New Zealand.

“I’m heavily involved in rotary and as such twelve blokes from the club decided to go away for two weeks. We hired a couple of campervans and travelled all around the place. One of the guys grew up there so he was able to take us off the beaten track and show us things that unguided tourists wouldn’t have seen. It was a great trip and further strengthened the camaraderie between the group. When we came back everyone told us how great it was and suggested we start a club for like minded blokes to be able to do the same thing.

“The concept has never really taken off the ground because we’re all busy with everyday life but we have a website and can organise group trips away to New Zealand. We have the contacts and a selection of itineraries for guys to do over there and some of the proceeds we make would go to various charities that conduct work for men’s health.”

Further to the church and pub is a little artist’s studio that pays homage to an art teacher and friend.

“I was getting art lessons from an artist by the name of Dirk Van der Lindt in Oxenford but unfortunately he got sick and passed away. I decided to buy his equipment and needed a place to put it all so I built a studio that replicated the one in his backyard.”

It was here that he found the inspiration to firstly paint and then build a waterwheel and wishing well.

Still not content though, Tery wanted to grow his village even further.

“I had a red Essex restored 20 years ago and the kids always called it the fire engine so I decided that the village needed a fire station. The grandkids love bringing their friends up to have a play on the fire engine – it’s brilliant.” 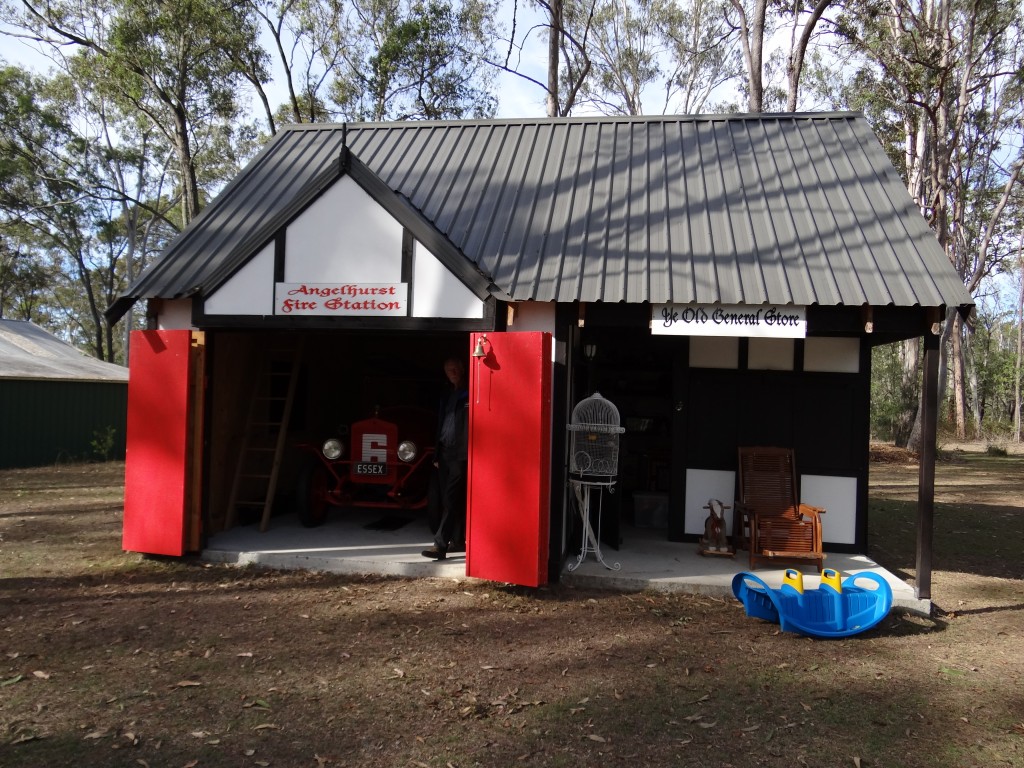 The village fire station was built to house Tery’s red Essex as it always reminded his kids of a fire engine.

Adjoining the fire station is the General Store that plays home to all of the bits and pieces that Terry has collected over the years, of which, are some old cars.

“I’ve always had a passion for German and English cars, ever since I was 17 or 18 and so one of the advantages of having the place is that I can open it up to certain car clubs that I hold memberships with. They come out and have a lunch and look at all of my junk,” he laughs. “I also use it for a couple of Camp Quality charity days where people can come and relax. I like to be able to share it with people but I’m very selective with who I invite here because at the end of the day, it is my house.

“I do enjoy having mates over for a beer and it’s always interesting to see what people think when they first come here. Most people are pretty surprised to find out that I have a pub and a church on my property.”

So how is Tery enjoying retired life?

“I’m pretty busy to be honest. I spend most of my days either working on a car or doing something around the yard. I spend some time doing some work with one of my son’s businesses and I also have a son who lives behind me with the grandkids. It doesn’t take much to keep busy and to be honest; I don’t know how I ever found the time to go to work,” Tery says.

“I think the village is complete now. I was contemplating a police station because I have a village police car but I don’t need any more sheds, I think I’ve got enough now.”